Reading the newspaper hasn't been particularly pleasurable for Jean-Claude Juncker in recent days. First, British historian Timothy Garton Ash compared him to King Louis the XVI, who was executed by the guillotine. Then, the Swiss paper Weltwoche lumped him together with Hitler and Mussolini and the British tabloid Sun described him as "the most dangerous man in Europe."

Juncker had suspected that the British press in particular would go on the attack against him, but he recently had to summon the police after paparazzi climbed over a fence into his property. Furthermore, his 90-year-old father burst into tears when a tabloid accused him of Nazi association. (The older Juncker was forceably recruited into the Wehrmacht following the occupation of Luxembourg.)

The situation is a delicate one: British Prime Minister David Cameron continues to categorically reject Juncker as the next president of the European Commission. Yet a majority in the European Parliament supports the former Luxembourg prime minister. The European Council, made up of EU heads of state and government, has the power of nomination, but the body is divided.

Several voices, including the influential German weekly Die Zeit last week, have called on Juncker to withdraw his candidacy as a final service to Europe. It is a potential solution that Berlin, too, could live with, despite Chancellor Angela Merkel's official support for Juncker's candidacy.

But Juncker, 59, has no intention of doing Merkel and Cameron that favor. It's a matter of principle, he argues. He campaigned as the lead candidate for European conservatives ahead of last month's EU elections, with the assumption being that the winner would become Commission president. Should he not be confirmed for that office, he says, it amounts to voter betrayal.

More than anything, though, a European power struggle is afoot. If Cameron prevails, the European Council will continue to reign supreme and the Parliament will continue to look like little more than a European debate club. "The will of the voters is as legitimate in the EU election as it is in other elections," says Austrian Chancellor Werner Faymann. "To ignore the results of the election would damage European democracy."

Early on, Merkel backed Cameron's position. At a dinner of EU leaders two days after the European election, she threatened to assemble a blocking minority together with the British prime minister. Cameron's warning -- that if Juncker was named to the position, it could accelerate Britain's exit from the EU -- had its intended effect. Almost all significant UK parties are opposed to Juncker, who they see as a European technocrat unable to reform the Commission. Only the EU-skeptic party UKIP is in favor or Juncker, say pro-EU voices in Britain, noting that a Juncker presidency would make it even easier for the party to sell its anti-Europe message.

But in Germany, the chancellor was accused of not supporting her own party's candidate and she quickly made an about face -- after telephoning with Cameron first to explain her reversal. The British prime minister was understanding, but continues to hope for German support when the time comes.

That, though, is looking increasingly unlikely. Last week, the European Conservatives and Reformists group in European Parliament, which Cameron formed in 2009 following his withdrawal from the center-right European People's Party (to which Merkel's Christian Democrats belong), voted to accept the euro-skeptic German party Alternative for Germany (AfD) into its ranks. Merkel had asked Cameron to prevent just that -- and his Tories claim they tried. But, as one CDU politician noted last week, the Tories are so "extensively infiltrated" by euro skeptics that any anti-AfD campaign within their ranks did not seem credible.

There have been efforts to find a compromise. One possible solution is for the Commission to incorporate many of Britain's reform wishes into its governing plan for the next five years in exchange for London's acceptance of Juncker. Merkel herself has spoken with Juncker several times in an effort to pave the way for such a solution.

But many in Berlin are beginning to believe that Cameron is uninterested in a compromise. Instead of softening his rhetoric, his is ratcheting up the pressure. Juncker was "nowhere on the ballot," he wrote last Fridayin an op-ed published in several European papers. "Each of the main political groups ran 'lead candidates' ... during the elections," Cameron wrote, "and did a back-room deal to join forces after the elections in support of the lead candidate of the party that won the most seats."

"Juncker's democratic legitimacy is not in question," Xavier Bettel, Juncker's liberal successor as the prime minister of Luxembourg, countered. The Commission president, he noted, will ultimately be confirmed by European Parliament. Merkel also rejected Cameron's position.

Cameron remains undeterred. This week, he vowed to fight Juncker's appointment "right up to the end," adding, "There is absolutely no question of changing my view."

One leading member of Merkel's CDU says Cameron has acted "incredibly clumsily, from a strategic perspective." He argues that the British prime minister should have come to terms with Juncker's being installed as Commission president back in March, when European conservatives chose him as their lead candidate. "But Cameron never had a plan B in case Juncker prevailed," the CDU politician continued.

Even a meeting last week between Cameron, Merkel, Dutch Prime Minister Mark Rutte and Swedish leader Fredrik Reinfeldt only hurt the British position. Rutte and Reinfeldt said they were prepared to debate policy but did not want to focus solely on Juncker. "Cameron is increasingly isolating himself," says Elmar Brok, a member of European Parliament for the CDU. "In the end, there will be a clear majority for Juncker in the Council." Even Council President Herman Van Rompuy has recently said that Cameron could be isolated.

But that raises another question: What will then happen to Martin Schulz, the SPD lead candidate who was defeated in the election? Without his Socialist faction in parliament, Juncker won't have a majority. To secure that support, Juncker has promised Schulz the position of Commission vice president. Austrian Prime Minister Faymann has joined those supporting the deal: "Jean-Claude Juncker and Martin Schulz are the logical contenders for the top European roles, working as a team for Europe." But with each country getting only one spot on the Commission, that would mean that Merkel's CDU, which got the most votes in Germany in the May election, would come away empty-handed.

Last Tuesday evening, Merkel briefed Vice-Chancellor Sigmar Gabriel , who is head of Germany's Social Democrats, on her meeting in Sweden. She did not, however, offer a way out of the dilemma. The chancellor knows, though, just how important Schulz is to a solution.

Two days later, Schulz met with Hannes Swoboda, the outgoing Socialist floor leader in European Parliament --a job that Schulz was tapped for on Wednesday -- and with Council President Van Rompuy. "We, as Social Democrats, support Jean-Claude Juncker's mandate to build a majority in parliament," Schulz told Van Rompuy. But, he added, it won't be easy to unify Socialists behind a conservative leader. A conservative replacement for Juncker, he said, is impossible.

Several EU leaders would like to see the decision on Juncker to be made at next week's regularly scheduled summit. "We can't give the impression that we are unable to reach agreement," says Luxembourgian Prime Minister Bettel. "I expect that we will achieve a qualified majority at the next summit." There is a large majority in favor of Juncker within the Council, he says. "We can't wait for months. Otherwise we risk an institutional crisis in the EU." 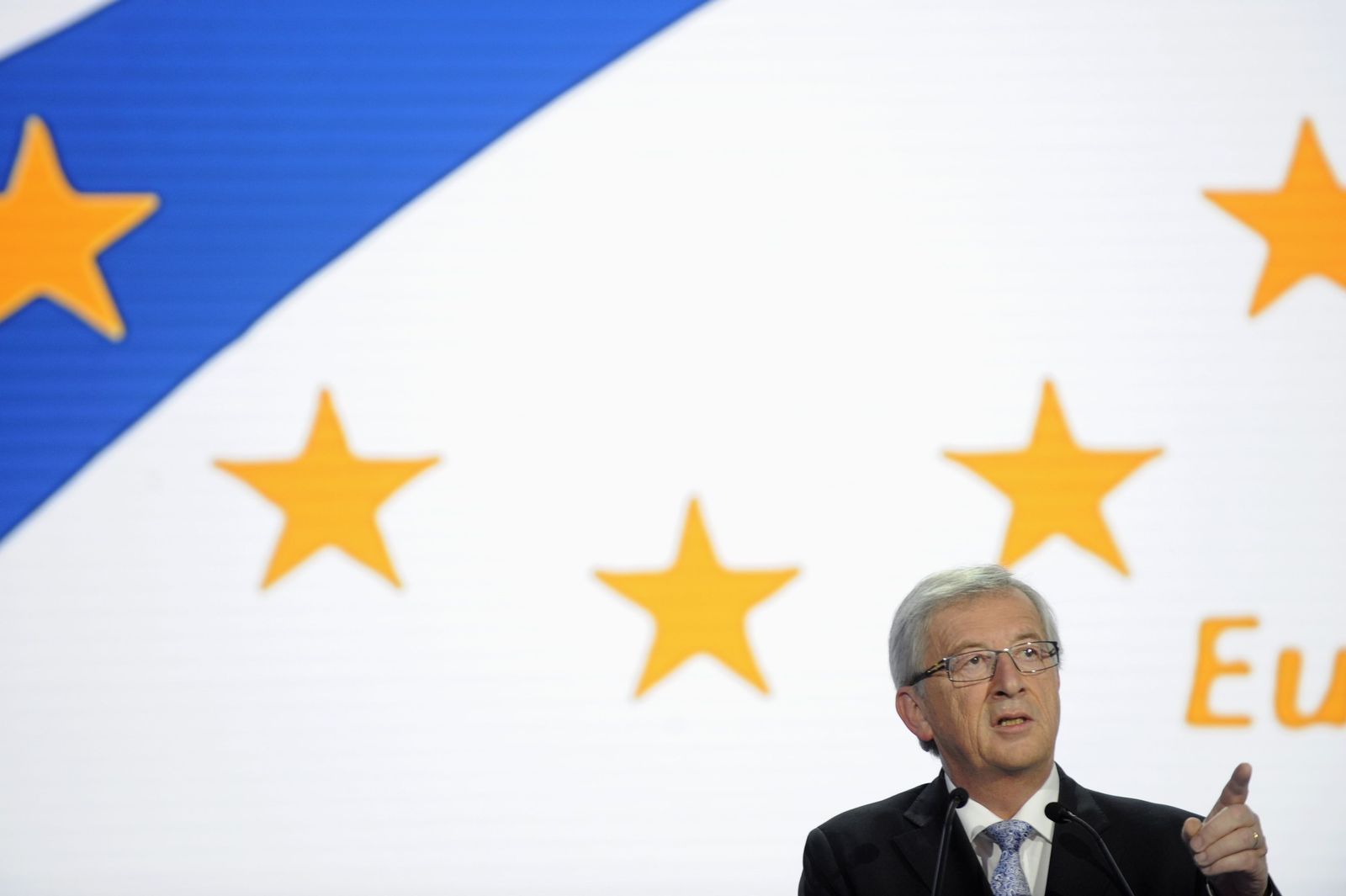 Jean-Claude Juncker will likely be made European Commission President over the objections of British Prime Minister David Cameron.