Nigel Farage is the kind of politician who apparently needs an opponent to bring out the best in him. Right now, that role is being played by a cushion. Sitting on a sofa in a London hotel lobby, Farage alternately slaps the cushion with the palm of his hand and punches it with his fist as he talks about how he intends to stir up British politics.

Farage is the leader of the United Kingdom Independence Party (UKIP), a right-wing conservative movement that aims to lead Britain out of the European Union.

For months now, his proposals have put the government on the back foot -- and this has rapidly increased his party's popularity among voters. Recent surveys show UKIP polling around 15 percent, which would make it the third most important political force in the country, after the Conservatives and the center-left Labour Party, yet ahead of the Liberal Democrats.

Nobody believes that UKIP could win that many votes in the lower house of parliament, the House of Commons -- in part because the British electoral system puts small parties at a disadvantage. But the opinion polls are enough to unsettle British Prime Minister David Cameron and his strategists on Downing Street.

This political pressure comes at a time when Cameron already has his hands full dealing with his own center-right Conservative Party. Tory parliamentarians are pushing him to make a commitment on Britain's future course with the EU.

Roughly one-third of Conservative MPs favor an EU exit, and even Cameron sees this as a plausible scenario. The prime minister has announced that he will clarify his stance on Europe in a long-awaited address this month, but he provided a foretaste in a television interview on Sunday.

While it would not be "right for Britain" to leave the EU entirely, the country is "perfectly entitled" to ask for changes to this relationship, particularly in light of the fact that the EU is "changing the nature of the organization to which we belong," he said on the BBC's "Andrew Marr Show."

In exchange for greater European integration, Cameron said that Britain should be allowed to take back some powers from the EU. Among his suggestions were a review of tighter EU immigration controls to limit the possibility for "people to come and live in Britain and claim benefits," and getting rid of the EU's Working Time Directive, which he said "should never have been introduced."

The political stakes are high and Cameron cannot allow himself to make any mistakes on these issues, having hesitated for too long to take a clear position on Europe. The prime minister has no strategy and has made tactical decisions out of fear of alienating voters. This is also one of the reasons why ranting members of UKIP and rebellious anti-EU members of Cameron's Conservatives are dominating the political discourse. They are making sweeping demands that Cameron cannot meet if he wants to avoid steering his country towards an exit.

Cameron's dithering on the issue is also to blame for the UK losing nearly all its clout in Europe. With increasing reluctance, he travels to Brussels, where the other heads of state hope that he won't threaten a veto again in an attempt to score points on the domestic political front. Nevertheless, Cameron doesn't want Britain to leave the European Union. He knows that an exit would damage the British economy -- and have considerable political consequences. On the other hand, he has members of his own party, Farage and a large proportion of the electorate breathing down his neck.

Roughly half of all Britons would vote in favor of withdrawing from the EU. Many of them see the debt crisis as proof that the European project has failed. Meanwhile, Cameron has to find a way to appease the British without further annoying his European partners. It was already months ago that he announced that Britain would examine existing European treaties to pick and choose which EU laws and regulations benefit the country. German diplomats are currently trying to convince their British counterparts that it doesn't work that way.

Still, Europhobia continues to spread throughout the country and is forcing both the Conservatives and Labour further to the right. Of the three parties represented in the House of Commons, only the Liberal Democrats are staunchly pro-EU -- and they are currently running at 8 percent in the opinion polls. Labour is afraid of making a crystal-clear commitment to Europe and the Tories are largely spewing populist rhetoric. UKIP leader Farage is pleased with this development. "What happens is that everybody is coming towards our position," he says.

Farage, 48, has been a member of the European Parliament since 1999. He has survived a serious car accident, a plane crash and testicular cancer. His autobiography bears the title "Fighting Bull." His second marriage is with a German national. He loves Europe, he says, adding "my enemy is the British political class, who have signed us up for this without ever telling us the truth."

Farage's tirades are appreciated by many British -- and generally loathed by politicians. His favorite targets are EU Council President Herman Van Rompuy, who Farage has dubbed "Rumpy Pumpy," and the president of the European Parliament, Martin Schulz. "They want to be the world's global superpower," Farage shouts, his voice booming throughout the lobby while he abuses the cushion. During one session of the European Parliament, he shouted at Van Rompuy: "You have the charisma of a damp rag and the appearance of a low-grade bank clerk. Who are you?" Farage believes that the UK is losing global influence because it's clinging too much to a failing Continent.

Like many small right-wing parties in Europe, UKIP is a movement of radical opportunists who claim that they speak for a large proportion of white lower-middle-class voters. They are fighting to ease the current ban on smoking in pubs and to stop the construction of wind turbines. It is a British version of the American Tea Party movement. Farage's latest battlefield is same-sex marriage, which the Conservatives are currently debating. Cameron says that he intends to introduce legislation this year that would make it legal for gays and lesbians to marry, starting in 2014. The Church of England and Roman Catholics oppose the plan, and 100 Tory MPs say that they will vote against the proposal. Cameron is sticking to his guns, though, and appears much more committed to this issue than to Europe.

Farage takes delight in watching the Tories rip themselves apart. The more divided they are, the better he can stage himself as Britain's savior. The UKIP leader is an aggressively nostalgic figure -- the poltergeist of British politics. This leads many to underestimate him and his party. Farage wants to make UKIP the strongest British party in the European elections in 2014 -- and the way things are looking now, this may not be an entirely unrealistic objective. By contrast, Cameron dismisses Farage and his supporters as marginal oddballs. He once called them "fruitcakes, loonies and closet racists." However, this doesn't allow the prime minister to escape the political dilemma that he has stumbled into.

If he wants to appease the Europhobes in his upcoming speech on Europe, Cameron will at least have to set a deadline for a referendum on the EU -- and he will have to decide what the people will vote on: whether Britain will leave the EU, or merely whether voters are satisfied with the government's policy on Europe.

In any case, the backbenchers in his party will only be satisfied if Britain withdraws from the EU. Moderate Tories have long since fallen silent. A balanced approach towards Europe has almost become a stigma. Nevertheless, Conservative MPs like Robert Buckland could add a number of enlightening aspects to the debate.

Buckland represents Swindon, a city 100 kilometers west of London, and home to a number of companies that rely on access to the European market, such as carmaker Honda and computer chip manufacturer Intel. He says it's probable that some of these companies will transfer their production facilities to the Continent if Britain leaves the EU. Buckland is afraid that thousands of workers will lose their jobs. The debate alone on exiting the EU annoys him, he says, because he thinks it's simply absurd.

Meanwhile, Farage is planning ways to win even more supporters. His party's campaigns against wind turbines and gay marriage are just the beginning, he says. His biggest issue this year, he contends, is the possible influx of millions of Romanian and Bulgarian immigrants, starting Jan. 1, 2014. Farage promotes the notion of a state that cuts itself off from the outside world and keeps out of people's lives as much as possible on the domestic front. It's a state that has a strong army to protect the lives of its citizens, but doesn't establish quotas for the fishing industry or ban hunting foxes with hounds. He would prefer to have everything as it was in the old days.

After an hour in the lobby, he gets up and lights a cigarette outside. That also annoys him. In an ideal Britain, there would be no ban on smoking. 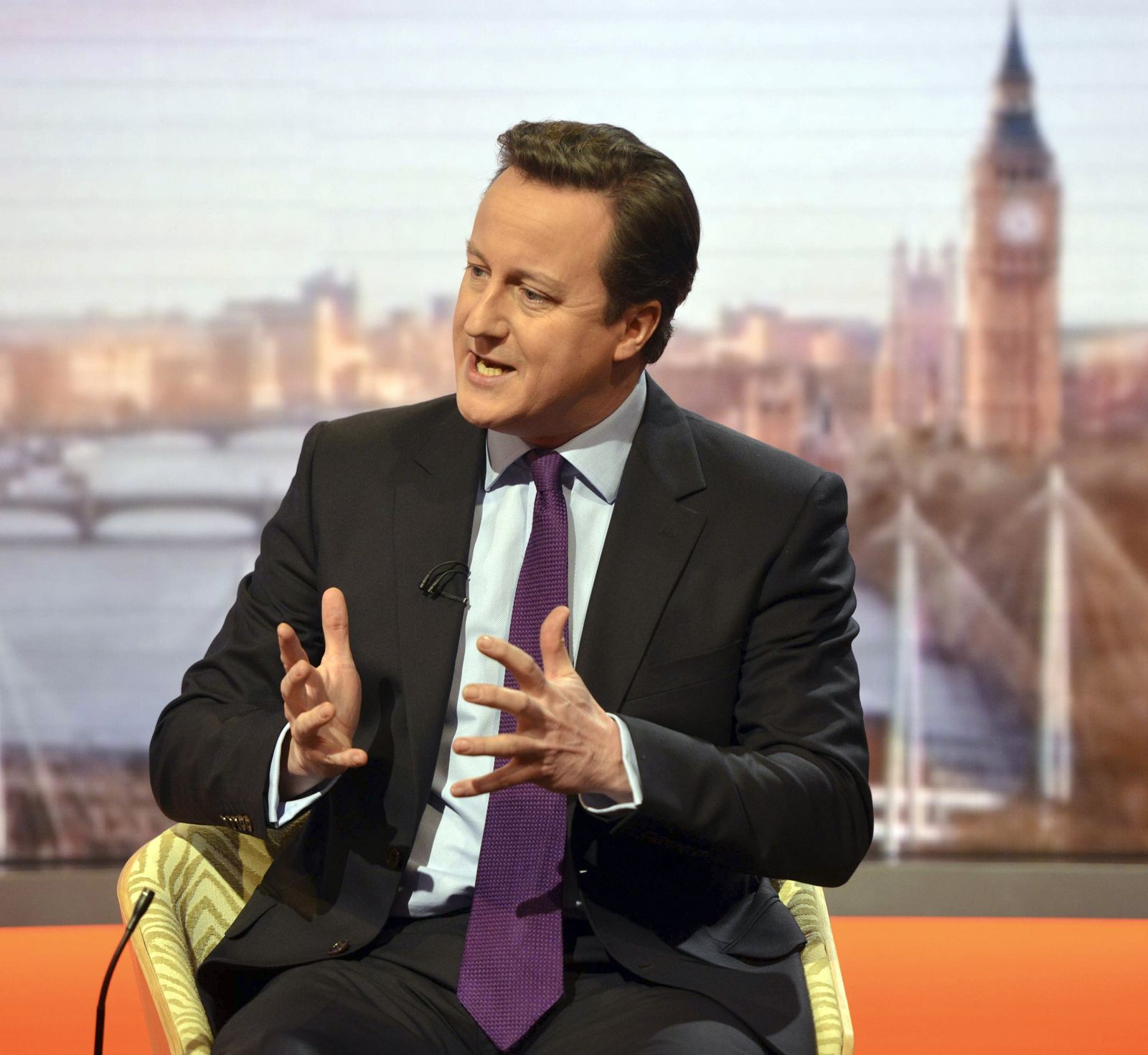 Cameron speaks on the BBC's 'Andrew Marr Show' on Sunday.