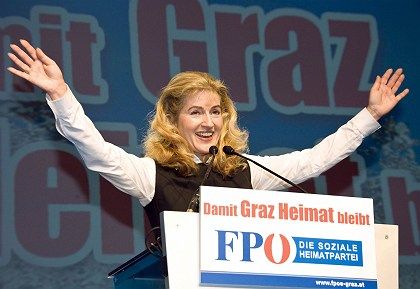 Election campaigns, it would seem, are uncomfortable times for immigrants to be in Europe. First, it was Ronald Koch, the conservative politician in the German state of Hesse who turned up the rhetoric and began railing against "criminal young foreigners" in his country. Now, an Austrian politician has followed suit.

Susanne Winter, a right-wing politician with the FPÖ party running for a city council seat in the city of Graz, blasted Muslims on Sunday, saying that "in today's system" the Prophet Muhammad would be considered a "child molester," apparently referring to his marriage to a six-year-old child. She also said that it is time for Islam to be "thrown back where it came from, behind the Mediterranean." Not yet finished, she also claimed that Muhammad wrote the Koran in "epileptic fits."

In an interview with the daily Österreich published on Monday, Winter continued the onslaught saying that child abuse is "widespread" among Muslim men and that Graz is facing a "tsunami of Muslim immigration." In 20 or 30 years, she warned, half of Austria's population would be Muslim.

Her comments have resulted in a storm of protest in Austria, with politicians and commentators of all stripes taking Winter and her party to task. Austrian prosecutors are also looking into the possibility of filing charges against the 50-year-old politician for incitement.

Her comments, said Omar Al-Rawi, head of integration for an Austrian association of Muslims, showed "a lack of respect" and they "had no basis in fact." He told the Süddeutsche Zeitung that such Islam bashing has reached a point in Austria that "one wants to puke."

But despite the strong reaction generated by Winter, such rhetoric is hardly foreign to political campaigns in Austria. Her party was brought to international prominence by Jörg Haider, the notoriously right-leaning politician who found success in the 1990s and earlier this decade with a mixture of xenophobia and nationalism. He has since moved on, but his rhetoric has remained the same. Campaigning recently for his new group, the Association for Austria's Future (BZÖ), he said, "We are still allowed to say Gruss Gott," -- the traditional Austrian greeting -- "and don't have to praise Allah." 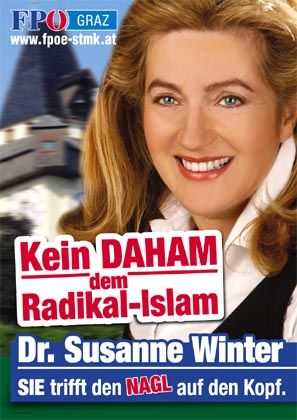 A Winter campaign poster: "Don't give radical Islam a home."

Winter's comments are also reminiscent of controversial remarks made recently by Roland Koch in his campaign to be re-elected as the governor of the western German state of Hesse. Following a brutal pre-Christmas attack by two youths -- one German born with Turkish parents and the other an immigrant from Greece -- against a pensioner in a Munich subway, Koch has turned youth crime, particularly that perpetrated by those with foreign backgrounds, into his No. 1 campaign issue. Among other questionable comments, he said it must be clear that the slaughtering (of animals) in the kitchen ... runs counter to our principles."