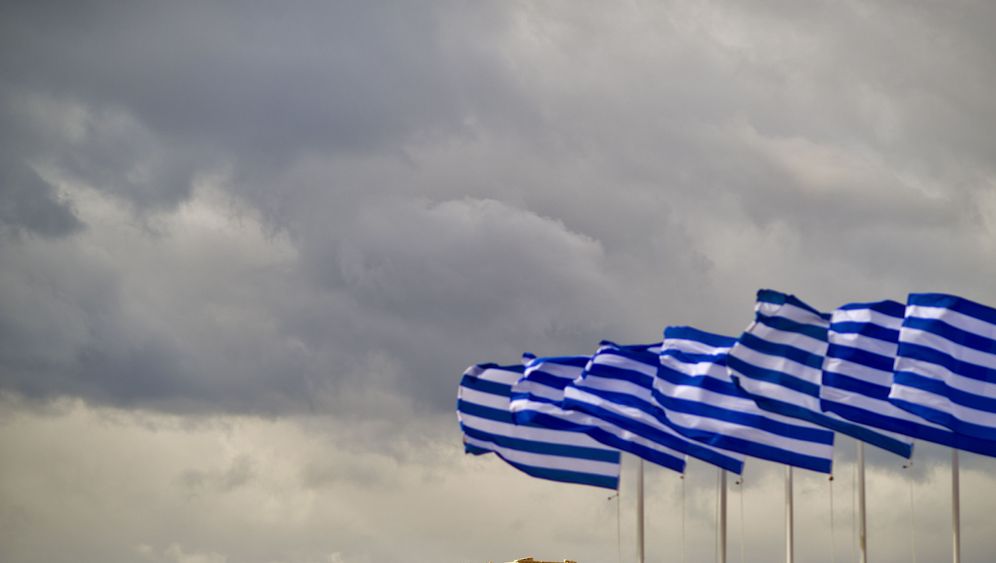 A group of men with microphones and cameras pushes its way to the podium under the dome of the rotunda at the Zappeion Palace in Athens. The audience stands up and claps, and the crowd chants: "Hellas, Hellas, Antonis Samaras." But the deeply tanned man who is entering the room with so much fanfare is not the head of the conservative Nea Dimokratia, or New Democracy party.

"Karamanlis," shouts a woman in a Chanel outfit, as she excitedly grabs the arm of the person standing next to her.

The appearance is a surprise for the party supporters. Most of all, however, it is a typical scene in this election campaign -- the shortest in the history of the Greek republic. Kostas Karamanlis, the nephew of the former president and party founder Konstantinos Karamanlis, governed Greece from 2004 to 2009. The nicest thing that could be said about the former prime minister is that he allowed his country to descend into ruin with his eyes wide open. He partook in the Olympic party in 2004, but he did relatively little for the country after that.

A Snapshot of Greece's Lack of Prospects?

This campaign was meant to be characterized by a sense of renewal. National and international commentators are writing that, when the Greeks go to the polls on May 6, they will "decide the fate of Greece." But the election campaign runs the risk of becoming yet another snapshot illustrating the country's lack of prospects.

Samaras is the leader of New Democracy, which still leads in the polls, and he could very well become the next prime minister. On this particular Sunday morning, he seeks to present his party's economic program. "One thing has to be clear," he says. "We want to change everything."

Rarely have campaign slogans been so promptly contradicted as they are on this day by the appearance of Karamanlis. Samaras is announcing a new beginning, and yet the man preceding him on the stage is his predecessor. Karamanlis has been silent for two-and-a-half years, since the defeat of former Prime Minister George Papandreou's PASOK party in the fall of 2009. He hasn't made a single statement, not on the crisis and certainly not on possible lapses during his term in office. And now he reappears to campaign for his party, as if nothing had happened in the interim.

It's almost as if the crisis has been forgotten. Crisis? What crisis?

When the Greeks go to the polls in a few days, an election that would once have attracted the attention of few people outside the country will now be of interest to a sizable portion of the world. Even the day of the election became a political issue when German Finance Minister Wolfgang Schäuble bluntly told the Greeks that they would be better off waiting to vote until after the country's budget for the next two years has been ironed out in June.

International Monetary Fund (IMF) Managing Director Christine Lagarde even played a role in the campaign, when she openly expressed her confidence in the two main parties. Only New Democracy or its socialist counterpart, PASOK, could ensure that the country would remain part of the euro zone, Lagarde said, thereby guaranteeing "the security and stability that Greece so urgently needs."

"It's absurd that precisely those who drove the cart against the wall are now expected to pull it out of the dirt again," says political scientist Seraphim Seferiades.

The Karamanlis anecdote reveals how overconfidently the political class in Greece still remains today. Nevertheless, there is a deep-seated reflex within the population to seek salvation with the two main parties, despite their obvious sins of mismanagement. After polls in recent months showed that ND and PASOK had lost a significant share of their voters, the most recent polls show them regaining strength, with 26 percent of respondents supporting New Democracy and 19 percent supporting PASOK. In February, the socialists had dropped to only 8 percent. It would take only 37 percent of the vote to achieve a narrow majority in a so-called "grand coalition" between the conservative ND and socialist PASOK, the configuration of choice for Greece's international backers.

No one demonstrates more clearly that there is much to be desired when it comes to renewal in Greece than the candidates of the two major parties: the conservative Samaras and the socialist Evangelos Venizelos.

Venizelos, 55, the finance minister until recently, was a confidant of former Prime Minister Andreas Papandreou, the father of George Papandreou. With his political patronage, the senior Papandreou played a key role in creating the dysfunctional, bloated government apparatus against which Venizelos is now so innocently crusading.

His opponent, Antonis Samaras, 60, the scion of an upper-class family, has also served as finance minister, as well as foreign minister and, finally, minister of culture. It was Prime Minister Kostas Karamanlis who brought Samaras into his cabinet for New Democracy. It is somewhat ironic that Samaras now claims to champion the European cause. For months, he refused to consent to the austerity measures demanded by the European Union and torpedoed every offer to cooperate with then Prime Minister Papandreou.

Samaras has the reputation of being a power-hungry opportunist. In defiance of all the polls, Samaras wants to govern alone after May 6. He makes grandiose promises, as if Greece were a prosperous place and not a bankrupt country. He wants to put a stop to salary cuts, increase pensions, reduce both the top tax rate and the value-added tax, and provide more government support for poorer families with children.

How does he intend to pay for his promises? "We have to reduce waste," is one of his answers. It isn't the most cogent one, but it's the one he mentions the most. Otherwise, he says, there are always the EU subsidies. 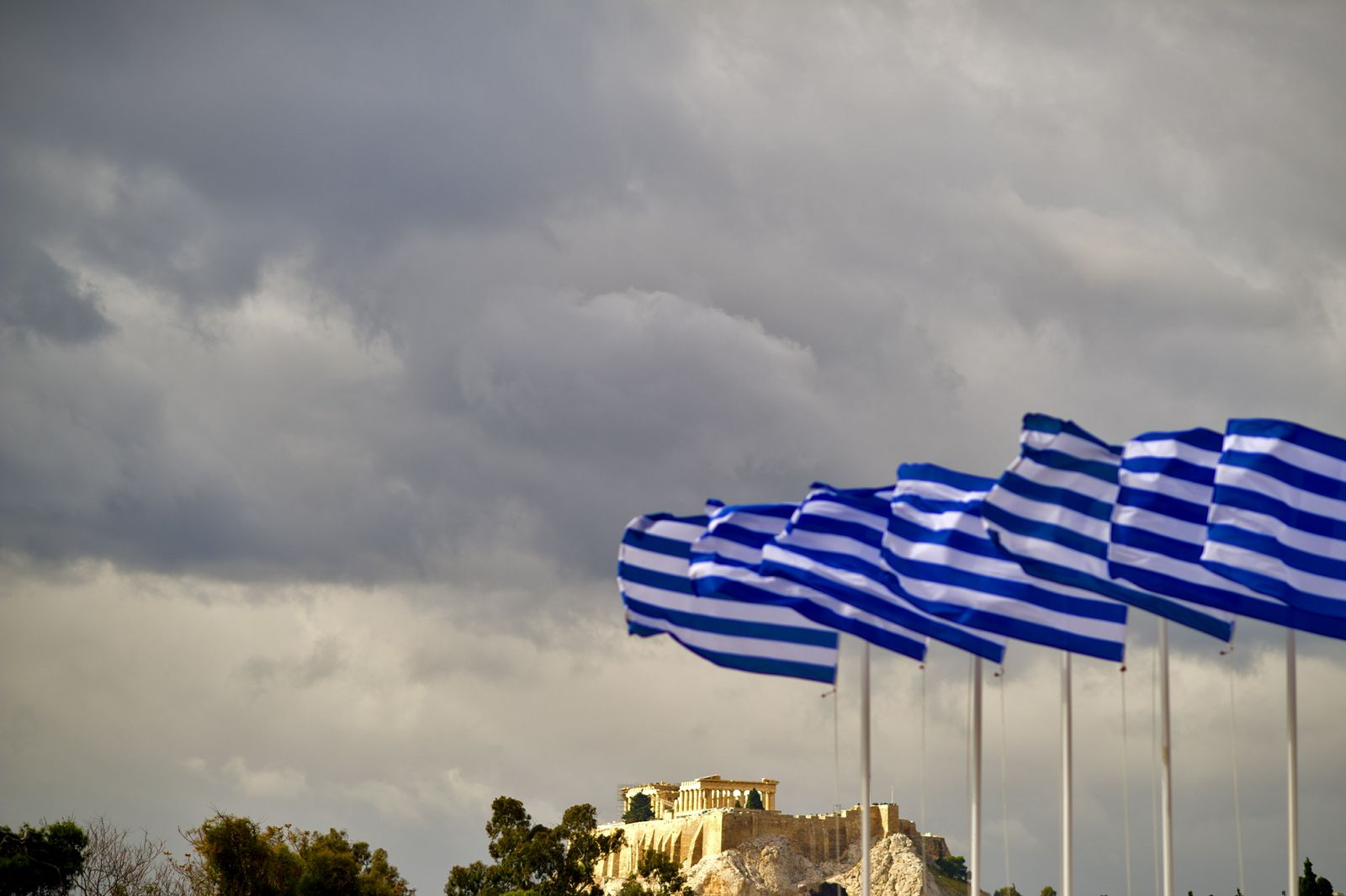 Greek flags wave in Athens against the backdrop of the Acropolis: National and international commentators are writing that Greeks voters will "decide the fate of Greece" on May 6. But the election campaign runs the risk of becoming yet another snapshot illustrating the country's lack of prospects.