The case had dominated the headlines in Greece for a week. A Greek parliamentarian was thought to have moved €1 million ($1.34 million) out of the country and into a foreign account last May. Even if the move was legal, many citizens saw it as a betrayal at a time when they were already reeling from deep austerity measures. Other politicians called for the culprit among them to step forward or even down. But no one did.

On Tuesday, the mystery was solved. Parliament President Filippos Petsalnikos revealed that the offender was Isidoros Kouvelos, the husband of former Foreign Minister Dora Bakoyannis and a shipping magnate. "My husband's activities were registered and declared," Bakogianni said on Greek television. "He's in shipping, and he has been doing that his whole life."

Still, the incident sheds light on a trend that is increasingly worrisome for Greece and many other countries in southern Europe. Given the uncertain future of Europe's common currency, a growing number of people are seeking to move their savings to safety. Last Friday, Finance Minister Evangelos Venizelos announced that, since 2009, fully €65 billion had been withdrawn from Greek accounts, and that roughly €16 billion of that was moved to foreign accounts. More than a third ended up in Great Britain, while about 10 percent migrated to Switzerland.

In London, those from highly indebted countries seeking a safe haven for their assets have driven up demand for luxury properties. Large real estate firms have reported that, between January and October 2011, some €406 million worth of homes and apartments in London were sold to buyers from Greece and Italy. The total represents almost 11 percent of all high-end dwellings that changed hands in that period.

Financial managers in Switzerland have also reported a constant flow of money into the country from Italy, according to the Wall Street Journal. Rich Italians, the paper reported, are buying Swiss franks or gold, a safe deposit boxes are in high demand. Wealthy Portuguese are also moving money out of the country, the paper found.

Nowhere, though, has capital flight reached the dimensions that it has in Greece. According to data released on Monday by the European Central Bank, deposits in Greek banks plunged by 17 percent last year. Other countries in crisis have also seen declines, but they have been much smaller. In Ireland, deposits fell by 6 percent, in Spain it was almost 3 percent, and in Italy it was just under 2 percent. By comparison, deposits in Germany in the same time period climbed by 3 percent and, in France, the increase was fully 10 percent.

Capital flight from debt-saddled euro-zone countries isn't just a problem for their finance ministers. It also creates difficulties for banks in those countries because reduced deposits means having less money available to extend loans to corporations and consumers.

Since foreign banks have essentially stopped loaning money to banks in countries like Greece and Portugal, the latter have been increasingly forced to obtain liquidity from their central banks, a phenomenon which has made itself felt in the payment system among European central banks known as TARGET2. Whereas the German TARGET2 balance is some €500 billion in the black, Greece has a deficit of €100 billion, while Italy and Spain each face an imbalance of €200 billion.

The TARGET2 numbers also show that a growing share of the money flow in crisis-stricken euro-zone member states is "involuntary." The totals represent money borrowed by individual central banks from the ECB -- and not foreign investment. Commerzbank analyst Lutz Karpowitz has calculated what capital flow balances would look like without the TARGET2 system. The result, as seen in the graphic below, is not terribly encouraging.

Graphic: Money on the Run

The graphic shows that capital flight from Greece began in earnest in the early part of 2010, almost at the same time that the first European Union bailout package for the country was passed. Flight from Portugal began just a short time later, as investors began fearing that the country was next in line.

Particularly concerning is the fact that Italy and Spain began seeing significant capital flight in the middle of 2011. It is a tendency that continued through the end of the year despite the fact that the ECB provided European banks with massive amounts of liquidity -- a step the ECB repeated on Wednesday, to the tune of €529.5 billion. But despite the first liquidity injection, deficits in Italy and Spain grew by about €40 billion each. "The flight has become stronger," Karpowitz notes. The capital flows indicate that investors do not believe that the bailout packages will have their desired effect.

It is extremely difficult to stop the current capital flow trends. States have the most influence when it comes to money that has been moved to evade taxes. Greece, for example, recently froze three accounts in Switzerland belonging to wealthy Greek businessmen. But Finance Minister Venizelos admits that it is extremely difficult to tell legal transfers from illegal ones.

Indeed, much of the capital flight seems to involve savings that have already been taxed according to law and belong to people simply trying to protect their wealth should their country decide or be forced to exit the euro zone. If that were to happen, savings would likely automatically revert to the country's new currency and thereby lose a significant amount of their value.

"Wealthy Greeks and Italians have been investing money abroad for a long time," says banking expert Martin Faust from the Frankfurt School of Finance and Management. Many of the countries at the southern periphery of the euro zone have a history of financial instability -- which leads people to be wary.

Should countries wish to impose a general ban on moving money abroad, they would have little choice but to restrict money transfers and increase border controls to prevent cash smuggling. But that would hardly help, Faust says, explaining that "such a step would come too late." The European debt crisis has gone on for so long, he points out, that many wealthy have already transferred their money to safety. "The effect of controls on capital traffic would be minimal," he says.

There is also a more fundamental argument against introducing restrictions. It would run counter to the freedoms guaranteed by the internal European market -- and that could endanger the entire political union. "It could result in there no longer being an acceptance for the European project in its entirety," Faust says. 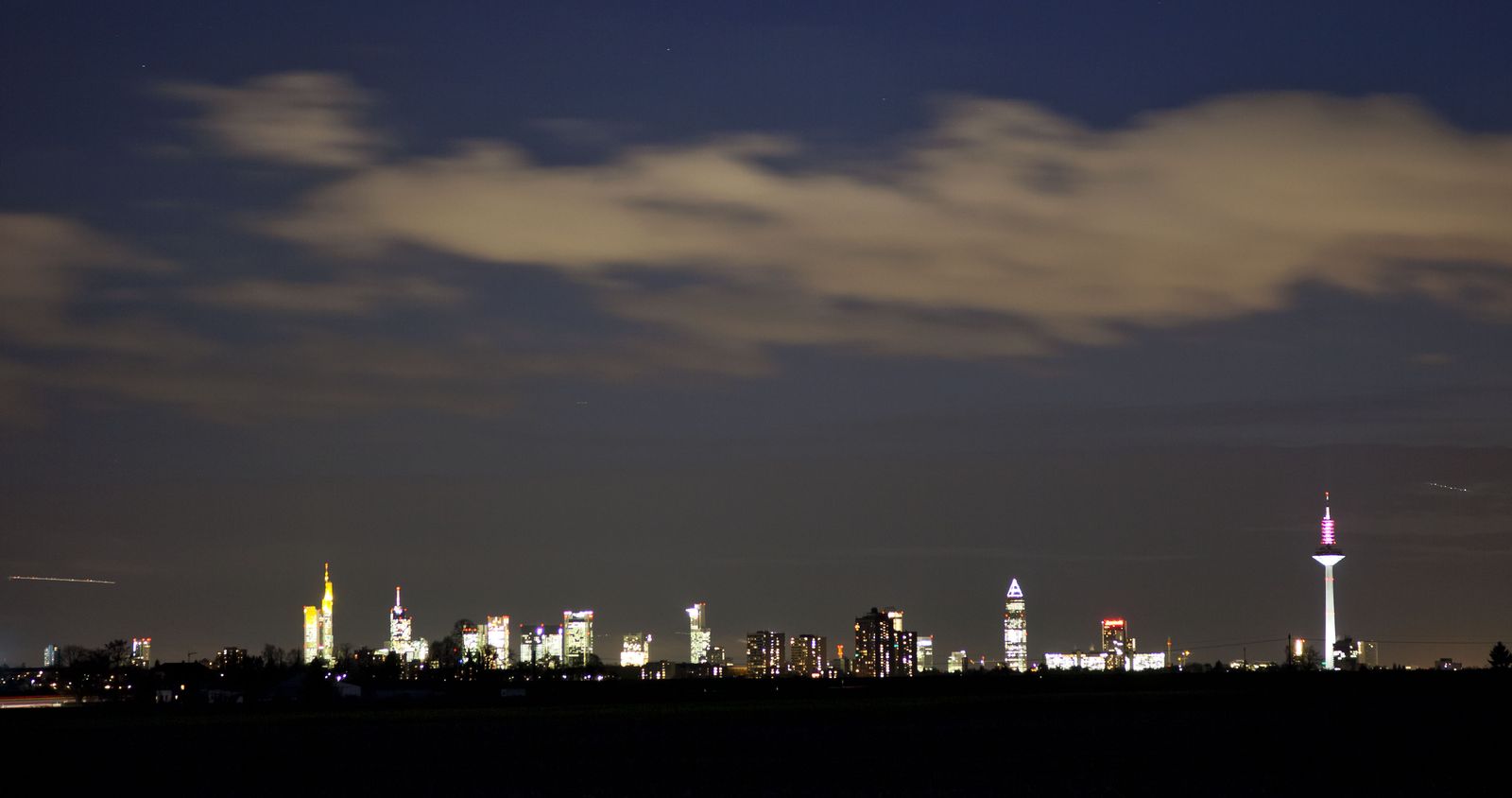 Banking imbalances are becoming a real problem for Europe. Here, the skyline of Frankfurt. 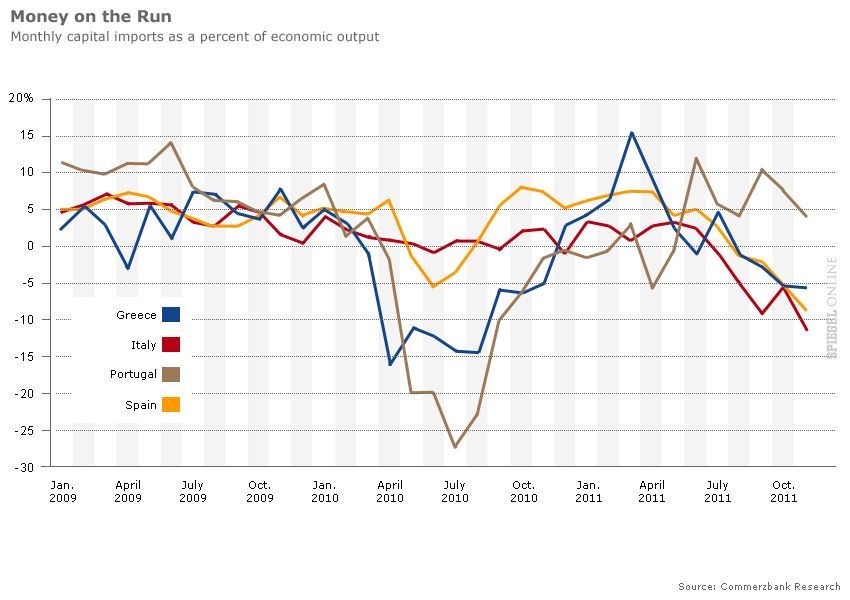 Graphic: Money on the Run