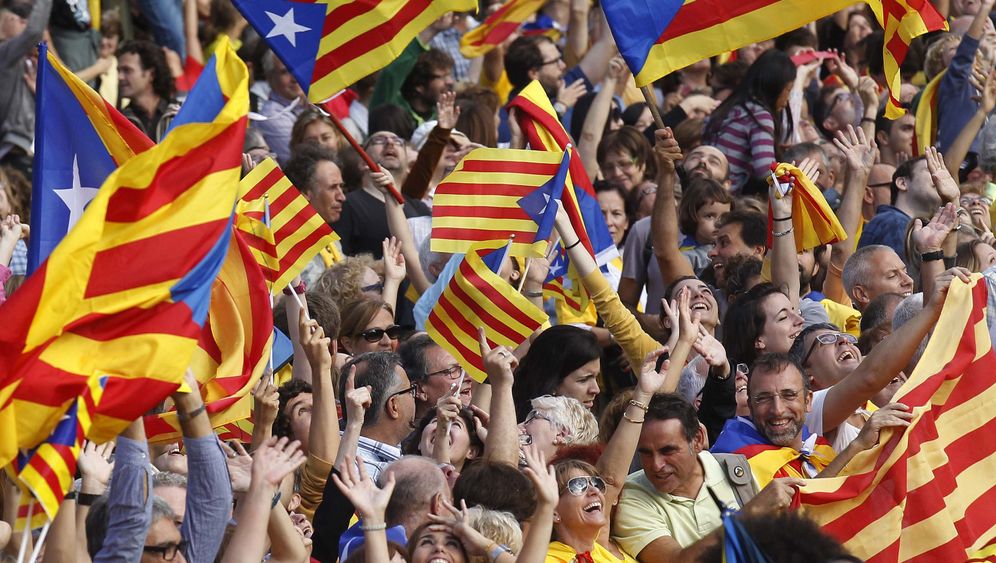 There are two questions that could secure a prominent place in the history books for Oriol Junqueras. The first is: "Do you want Catalonia to be its own state?" The second: "Do you want that state to be independent?" Junqueras, a 45-year-old historian from the Autonomous University of Barcelona, is the man behind the referendum that could result in independence for Catalonia.

The president of the Republican Left of Catalonia (ERC), Junqueras is convinced that a majority of his compatriots in the region in Spain's northeast would like to live in an independent state. Since the European Parliament elections in May, the ERC is Catalonia's strongest political party, partly the result of Junqueras' unflagging support for independence.

Junqueras' popularity is such that he was also elected mayor of his hometown, Sant Vicenç dels Horts, three years ago. "Even though 80 percent of village residents speak Spanish instead of Catalan, they elected a separatist," he says. Now, he is hoping to win over all of Catalonia to his cause.

Such a referendum, Junqueras says in his office in Catalan Parliament in Barcelona, "is the best democratic instrument" to learn if a majority really does want to secede from the Spanish Kingdom. The vote is to take place on Nov. 9, a date chosen in concert with the regional government's prime minister, Artur Mas.

He is fully aware that it won't be easy to push the referendum through. But Junqueras, who likes to wear jeans and leave his collar open, intends to use all the means at his disposal to do so. In the 21st century, he says, it is unacceptable that "the legal framework functions as a hindrance to democracy." It is not enough, he argues, that voters give politicians a mandate every four years. They have to play a direct role in all decisions made, even if they must resort to civil disobedience.

This Thursday, an annual holiday to mark the National Day of Catalonia, will provide some indication as to just how widespread the desire for Catalan independence really is. A demonstration has been planned and several grassroots movements, including the 30,000-member Assemblea Nacional Catalana (ANC), are set to take part. Last year, ANC President Carme Forcadell, a member of Junqueras' party, organized a 1.5-million-person chain stretching the 480 kilometers from the southernmost point in Catalonia all the way to its northern tip.

This year, pro-independence activists hope the demonstration will be even more impressive. Some 2 million marchers, all clad in the red and yellow of Catalonia, are to form a gigantic "V" on Barcelona's two largest boulevards. "V" in this case stands for Vote, for Voluntat (Will) or for Victoria (Victory). Smaller Vs have already made an appearance in demonstrations held in places such as Frankfurt, Brussels and Paris.

One week after the Catalan holiday, Scottish residents are set to vote in their own independence referendum. That poll has been accompanied by significant handwringing in London and Britain's three largest parties have done their best to convince Scots to remain a part of the United Kingdom, even announcing on Monday that they would release a new plan for greater Scottish autonomy this week. But Spanish Prime Minister Mariano Rajoy has thus far failed to come up with an attractive offer for the Catalans.

The government in Madrid likely believes that such an offer is unnecessary. The Spanish constitution makes it virtually impossible for a region to split off from the country. A binding referendum could only be made possible were the Spanish parliament to push through a constitutional amendment. But 86 percent of the lawmakers in Madrid have already rejected the idea. A similar plan by the Basque government was rejected nine years ago. "I will not allow you to hold the referendum," Prime Minister Rajoy recently told Catalan leader Mas.

But Junqueras, who holds a Ph.D. in economic history, draws hope from the many new nations that have been founded in recent decades and centuries. And his enthusiasm for independence is one shared across Spain's northeast.

Although 5.5 million of the 7.5 million people living in Catalonia were not born there, fully 60 percent of them identify themselves first and foremost as Catalans, surveys indicate. Four years ago, a study conducted by the Autonomous University of Barcelona found, only a quarter of the population identified themselves as such. Whereas only a fifth were in favor of secession as recently as 2010, fully 50 percent now want independence.

Surveys predict that the pro-independence movement could end up with 57 percent of the vote in November. That number, though, is far from solid. Just a few weeks ago, 38 percent indicated that they would be amenable to remaining a part of Spain were the central government in Madrid to grant Catalonia more autonomy.

The history of Catalonia's independence movement reaches back to the days of the Franco dictatorship. During the almost 40 years of his iron-fisted rule, the Catalan language was banned. But in 1978, just three years after Franco's death, the Kingdom of Spain passed a democratic constitution granting the country's 17 regions autonomy. Catalonia and the other regions then got their own constitutions which guaranteed self-government. Since 1980, Catalans have been electing their own parliament, have had their own police force and have taught their children in the Catalan language.

Ten years ago, when the Socialist José Luis Rodríguez Zapatero was prime minister, he unwittingly triggered the independence movement by suggesting that Catalan autonomy could be expanded. At the time, Spanish parliament in Madrid was called upon to approve a new regional constitution for Catalonia and only did so after making significant changes to it. Voters in Catalonia adopted it with a large majority nonetheless. But then, conservatives from the People's Party challenged certain, vital passages of the document and when the country's high court demanded in 2010 that all mention of the Catalan Nation be struck from the preamble, a million people took to the streets of Barcelona in protest. The demonstrations were further fueled by insulting comments made by Spanish politicians.

Those in favor of an independent state point to the tradition of civilian self-rule that stretches back to the Middle Ages, a time when councils were able to limit the reach of the king. Even after the two kingdoms of Catalonia and Aragón were united with that of Castile, the king and his successors had to confirm special rights for the Catalans.

The region only lost its special rights with the War of the Spanish Succession in 1714. On Sept. 11 of that year, the people of Barcelona, who had remained loyal to the Hapsburgs, finally surrendered to French-Castilian troops following a 14-month siege. The Catalan national day, which will be celebrated this Thursday, is a memorial to that defeat exactly 300 years ago.

A resolute opponent of Catalan independence lives at the edge of the Barcelona old town: the 47-year-old Joachim Coll. Like his adversary Oriol Junqueras, Coll is also a historian. Many of his neighbors have decorated their balconies with the red-and-yellow striped regional flag bearing the star of independence.

But Coll believes that a secession of his homeland could be defended neither politically nor morally. "In a constitutional democracy, there is no right to self-rule or to secession from the state as a whole," he says. Furthermore, he believes that Catalonia, as Spain's richest region, is showing a lack of solidarity with the rest of the country. "You can't be both leftist and nationalist," he says, referring to Junqueras.

The governing party in Barcelona has long complained that Catalonia accounts for a fifth of Spain's economic output but only makes up 16 percent of the country's population. In 2011 alone, they allege, the region received €15 billion ($19.4 billion) less from Madrid than it paid to the central government, adding that the Spanish government has neglected Catalonia for years when it comes to investments.

The Spanish Finance Ministry has rejected the deficit claim, saying that the 2011 shortfall was only €8.5 billion. Coll and others have said that, if such imbalances persist, then regional governments should simply renegotiate the payments they owe to the central government.

In order to give a voice to those who reject independence, Coll recently founded the Societat Civil Catalana in Barcelona. He hopes that it will be able to successfully combat what he calls the "virus of populism."

"We want to be Catalans, but we don't want to dispense with Spain," says fellow independence opponent Jacinto Soler Padró, a 73-year-old business lawyer. Under Franco, Soler applied with Barcelona municipal authorities for money to nurture the Catalan language -- and he even spoke Catalan in making his request. His application was rejected and he was locked up for a month in prison for his troubles, he says. "Nevertheless, I am not in favor of independence."

Like many others, Soler believes that secession is both unrealistic and potentially damaging. Even consultants hired by the regional government noted that an independent Catalonia would initially have to borrow €5 billion a month to pay civil servant salaries, pensions, unemployment benefits and other costs. The infant country could only expect surpluses once it had a functioning tax authority.

Soler and several of his friends in the business world would prefer to see an "intensification of the already strong decentralization of the Spanish state." Having lived in both Germany and Austria, he is familiar with the federalist systems in place there. He then points to the painting of a ship in rough seas hanging on the wall above the table. "We Catalans have become caught in high surf," he says in German.

A Measure of Last Resort

Those in favor of independence are seeking to take advantage of the agitation. ERC head Junqueras believes that the moment is ripe to push through his dream of a Catalan state and is counting on his region's relations with other EU countries. "I expect that the recognition from Spain and the EU comes not within months, but within weeks," says Junqueras, who was once a European parliamentarian in Brussels. After all, he says, Catalonia would be a net payer into the EU. "Everyone wants to pursue free trade in the European currency." Plus, he adds, 70 percent of Spanish exports to Europe travel across Catalan roads.

With the independence movement gaining steam, there is little Artur Mas can do. "I will 100 percent call the referendum," he says. In the coming days, he plans to present a special law in Catalan parliament to provide a framework for the holding of referenda to give it a veneer of legality. Spanish Prime Minister Rajoy has pledged to challenge the law, just as he has promised to dispute the referendum as such.

Mas would then have no other choice but to call for snap regional elections and frame them as a plebiscite over independence. That, though, would be a measure of last resort, says Oriol Junqueras. He wants to hold the referendum on Nov. 9 even if it is prohibited by Madrid.

And in the end, he is likely to win either way. Surveys indicate that his party would win the next regional elections. Should that come to pass, the Republican Leftist would become Catalonia's next prime minister. 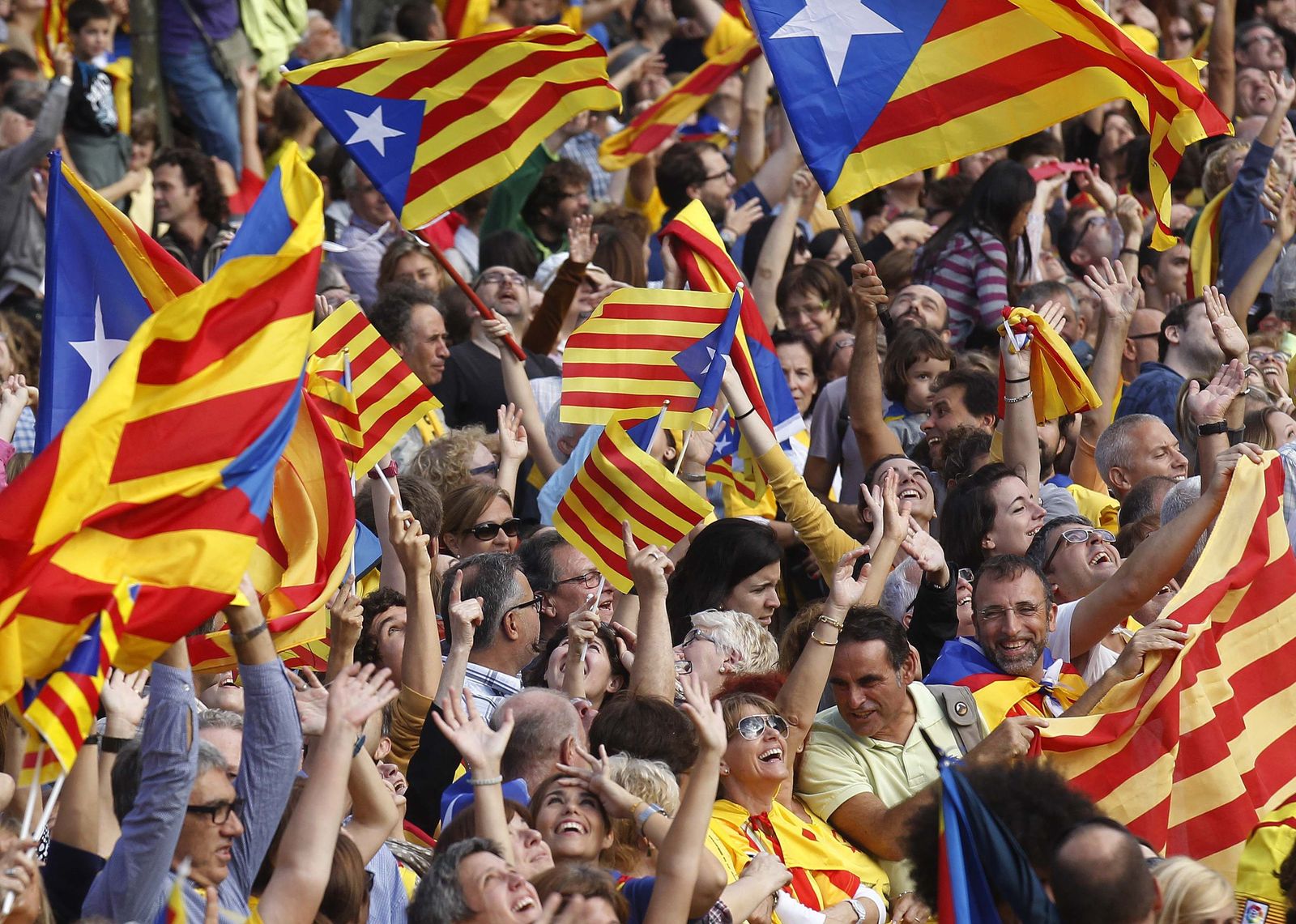 Scotland will be holding a referendum on independence later this month and Catalonians in Spain want to follow suit. But it could be difficult. The Spanish constitution doesn't allow for secession. This image is from the 400 kilometer (249 miles) human chain formed as part of Catalan national day celebrations in 2013. 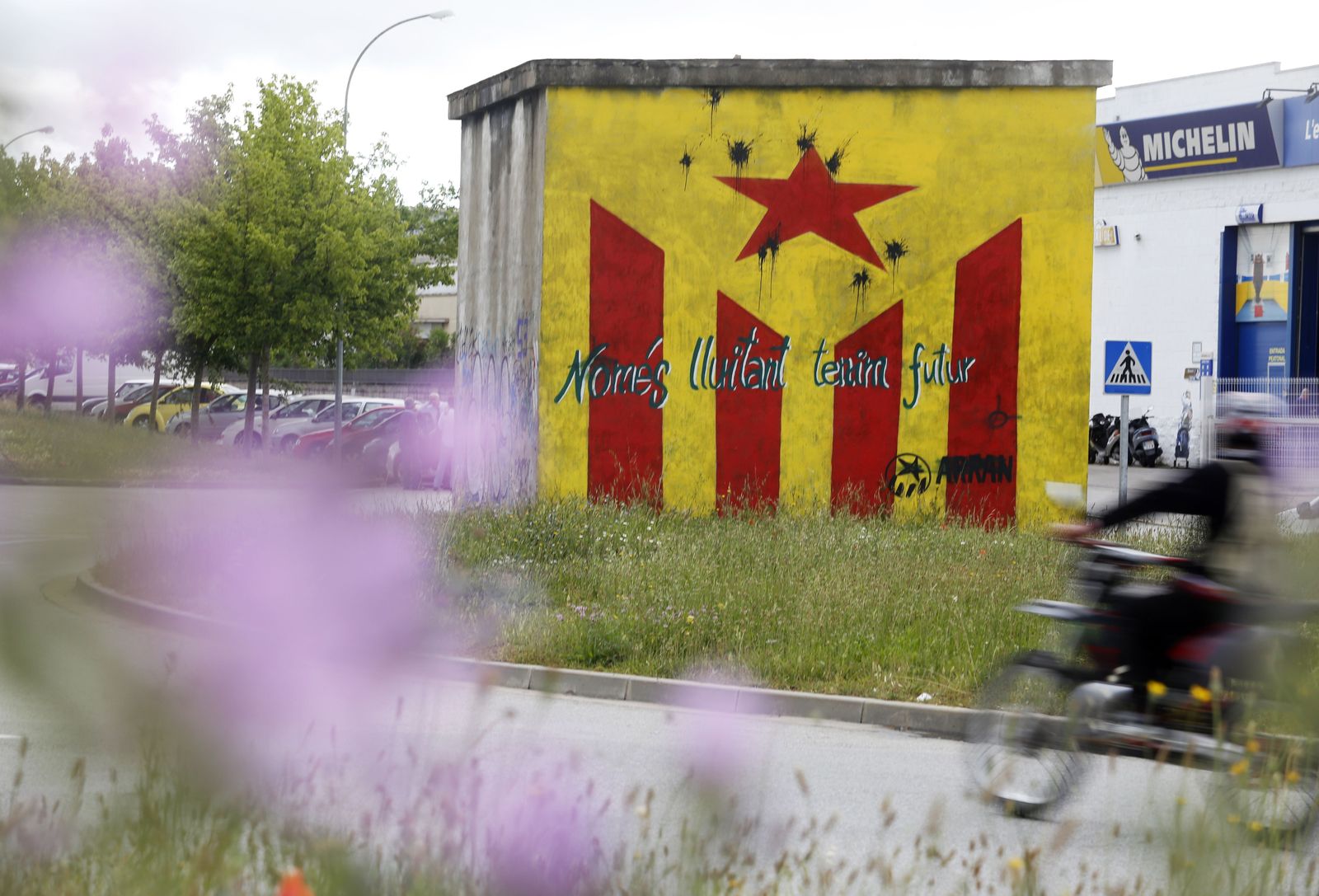 Grafitti painted in the colors of the Catalan flag in support of independence painted on the side of a house in Girona. Independence supporters expect up to 2 million people to turn out for marches on this year's Catalan national day, on Thursday.