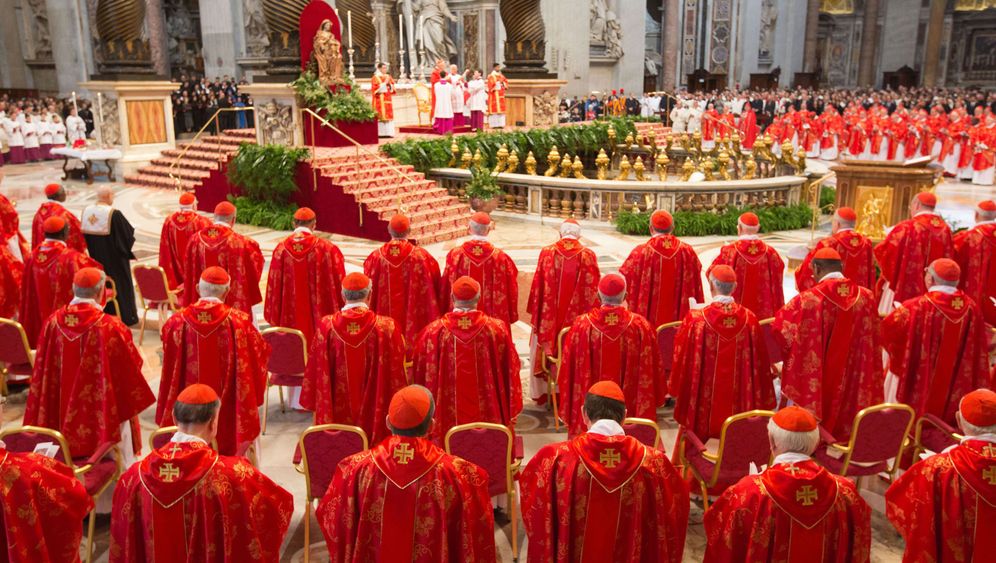 To get a taste of what the new pope might end up wearing, a glance in the window of Gammarelli, the famous tailor shop in Rome which outfitted Benedict XVI, was a must last week. Fur-lined mozettas and hand-sewn crimson loafers were on display among other papal items. When asked how he knew the future pope's measurements, owner Lorenzo Gammarelli said: "It's easy. I just assume the average."

God forbid, say the cardinals from around the world who have been gathering daily at the Vatican since early last week, so that the process of electing a successor of Benedict XVI can begin on Tuesday afternoon. They are seeking a leader who will stand out, one who can lead the crisis-plagued church into a better future.

This is no easy task, as indicated by the protracted pre-conclave talks. Indeed, so many cardinals wanted to have a say that their speaking allotments had to be limited to a mere five minutes each. Despite every effort to keep the debates secret, information repeatedly trickled out.

The leaks revealed that cardinals from around the world are sharply critical of the papal administrative machinery. Everything was discussed, including Vatileaks, the Vatican bank affair and the sexual abuse scandals. Cardinals from Africa and Asia sharply criticized the Vatican's patronizing attitude toward local churches. An American cardinal admonished the central administration, saying that its focus must be on serving the church rather than on serving itself. He noted that it was time to put an end to the integration between the Vatican bank and the Administration of the Patrimony, release the true financial figures and bring in outside experts. Ties to the Vatican bank, he said, might have to be severed altogether.

German Cardinal Walter Kasper also spoke his mind, until the Vatican imposed a ban on interviews last week. The 80-year-old called for a "more horizontal government of the church, with more collegiality," saying that the "Curia must be revolutionized, and it cannot fear transparency." The church, Kasper added, must finally free itself of the affliction of Roman centralism; a strong center, he noted, doesn't automatically mean centralism.

The Italians at the Vatican, on the other hand, tried to focus in their remarks on the supposed achievements of the Curia -- delivering, for example, rosy reports on the state of the Vatican's finances. But insider reports about what a great job they had done at the Vatican were not well received.

"We need to look attentively at the work of the Curia in recent years," said Daniel DiNardo, the archbishop of Galveston-Houston in Texas. His remarks were echoed by his fellow US cardinals Timothy Dolan and Sean Patrick O'Malley in their early press briefings. Since last Wednesday's gag order, however, the Americans too have largely fallen silent.

Yet despite the silence, it's hard to overlook what it is really at stake in this conclave. Even most of the ultraconservatives no longer want the kind of church that the two chairmen of the College of Cardinals represent. Angelo Sodano and Tarcisio Bertone stand for the past. The two men share some of the responsibility for the Vatileaks and Vatican bank scandals, the cover-up of the priest abuse scandals and the flap over Holocaust denier Richard Williamson.

The current mood can be quickly summed up: We now need a new pope surrounded by new people who will turn their attention to repairing the system. And with all due respect, we don't need someone who, like Benedict XVI, proclaims eternal truths. Nor do we need someone like John Paul II, who merely travels around the world, diverting attention from the church's problems.

As such, the liberals and those on the right are -- surprisingly -- in agreement that the new pope should be different from Sodano and Bertone. He should certainly be exceptional, standing out from the other 114 cardinals who enter the conclave on Tuesday. Yet he also has to be one of them.

There are few elections or political party conventions in which the high arts of tactics, diplomacy and intrigue are as important as they are in the conclave. So far, none of the camps has been strong enough to push through its candidate of choice. Coalitions must painstakingly be formed. Highly respected cardinals like Viennese Christoph Schönborn, Italian Angelo Scola and Brazilian Odilo Scherer are believed to have garnered the support of up to 40 cardinal-electors each, but that isn't enough. A candidate needs 77 of the 115 votes to achieve a two-thirds majority.

The Italians could live with someone like Scherer, provided they got the position of Cardinal Secretary of State, the number two position at the Vatican. In later rounds of voting, however, they could put forward one of their outsiders, such as Angelo Comastri, a popular spiritual charismatic especially liked by the northern Italians.

So far, though, the only cardinal who has managed to establish himself as an emotional favorite is the likeable 55-year-old Filipino cardinal, Luis Tagle. He is the only candidate with Obama-like charisma. But he is also very young. And it seems unlikely that church leaders are ready for such a drastic change. Still, someone like Tagle (or an African cardinal) could immediately change the Catholic Church's ailing image worldwide.

Many rumors, often free of factual foundation, have been making the rounds, and potential candidates have been scrutinized for weaknesses for days. The church is determined that the new pope not be immediately ripped apart by the media.

Taking Measure of the New Pope

Take, for example, Canadian Cardinal Marc Ouellet, who was considered promising papal material at first -- and whose prospects declined when it emerged that his brother had pled guilty to sexual offences with two young girls. In an interview on Canadian radio, the cardinal himself said: "I think a certain number of people have more chance of being elected than me." Angelo Scola, another front-runner, is burdened by an incomprehensible theology and an excessive proximity to Italy's political right. Boston Cardinal Sean O'Malley, another promising candidate, has been criticized for allegedly dragging his feet in investigating sex abuse cases.

Candidate bashing is standard Roman practice in the pre-conclave, as is canvassing for one's own favorite candidate. German Cardinal Walter Brandmüller is excellently prepared for the latter activity. He had his wine cellar properly stocked, and he has been meeting with other cardinals every day in his apartment directly above the vestry at St. Peter's Basilica. Brandmüller, one of the staunch conservatives, is campaigning for Albert Malcolm Ranjith Patabendige Don, the archbishop of Colombo in Sri Lanka. Ranjith is known for wanting to have his priests trained by members of the traditionalist Society of Saint Pius X.

The cardinals, for their part, are pleased that things are finally getting underway. Most expect to have a new pope by Wednesday afternoon at the earliest or, perhaps more likely, on Thursday.

At the shop of papal tailor Gammarelli, it also seems clear that a decision is immanent. His show window had been cleared out by the weekend. The red shoes and the fur-lined cape (rabbit!) are on their way to the Vatican.

"We will see what the new pope's measurements are in a few days," says Gammarelli. And what will he do with the articles he has already made? "You can always alter average measurements. To do so, I'll just have to visit the new pope in the Vatican."