The chancellor's message of congratulations was business-like. She would work "well and intensively" with the new French president, Angela Merkel said. Speaking at a news conference in Berlin, Merkel promised to receive François Hollande "with open arms" and said French-German cooperation was "essential for Europe". But it is likely that her sentiments would have sounded more heartfelt and convincing if she had been congratulating Nicolas Sarkozy. Essentially, the message was this: Things will be ok.

And they will have to be. Despite the rhetorical roar of the presidential campaign and the threats Hollande lobbed towards Merkel, France and Germany will now have to pull together, a fact which is clear to both the president-elect and the chancellor. Time is in short supply: The euro crisis is not going to stop and take a break until France and Germany can realign their political axis. That much already became clear on Monday when financial markets fell amid new fears that the euro crisis was about to erupt again and concerns that Europe will abandon its austerity policies following the elections in France and Greece.

The relationship between Berlin and Paris will not become easier. At a meeting of the leadership of Merkel's conservative Christian Democratic Union party on Monday, Merkel made clear that she will not be driven off course by Hollande. The CDU leader stressed she would not permit "flash in the pan economic measures," participants in the meeting reported. Speaking to journalists later, she said common decisions that have already been agreed on cannot simply be amended after elections in member states. "We cannot work like that in Europe."

In recent years, Merkel and Sarkozy acted in unison to shape European policy. Indeed, it was no coincidence that the media dubbed the duo "Merkozy." The chancellor went as far as openly backing Sarkozy's re-election. But now a Socialist is moving into Elysée Palace who has little regard for the austerity Germany has sought to impose on Europe. "It's not for Germany to decide for the rest of Europe," Hollande said during his campaign, implying that his predecessor had allowed himself to be walked over by Merkel.

Hollande will act with self-confidence, especially at the beginning of his presidency. He can't abandon his grand announcements without a fight, promises such renegotiating the European Union fiscal pact for budgetary discipline. But, as sources close to him have recently been repeating with increasing frequency, Hollande is not seeking open confrontation either. "The relationship between Paris and Berlin is rock solid," Jean-Marc Ayrault, Hollande's close adviser on issues relating to Germany, recently assured. He added that he was preparing for close cooperation with the German government.

The Hollande camp forged working-level contacts with the Chancellery in Berlin during the campaign. When Angela Merkel called Hollande on Sunday evening to congratulate him on his win, it was the first time that the two had spoken. It is likely that the new president will visit Merkel in Berlin on May 15. And more than a few observers believe that after a while, the chancellor might even come to a better understanding with Hollande than she did with the hyperactive Sarkozy.

"Hollande is a thinker, he works through scenarios, is rational and not mercurial," Regis Le Sommier, the deputy editor in chief of French weekly Paris Match, wrote in an editorial for Germany's Bild newspaper. "It would not surprise me if a friendship developed at some point between him and the more reserved Merkel."

Meanwhile, Ruprecht Polenz, who is a member of Merkel's CDU and chairs the Foreign Affairs Committee in parliament, wrote in the Berlin daily Der Tagesspiegel that he was convinced that Hollande "given his whole personality" is someone who Merkel "can work with more easily at the beginning than with Sarkozy."

No Time For Tactical Games

In Berlin, politicians are hoping that, after his tough campaign, Hollande will quickly adopt a more realistic view of the European debt dilemma. Monday's stock market slump will show the new French leader how sensitive financial markets are. Concern on the markets over the fact that there is no stable, pro-European government in Greece is enormous -- and they leave no time for tactical games at the negotiating table.

"The fiscal pact is not negotiable," Merkel reiterated on Monday, warning that otherwise states like Greece might want to renegotiate their cost-cutting programs.

Meanwhile, Europe's two most important European finance politicians also sought to bring the future French president into line. Speaking to German public broadcaster ARD on Monday night, German Finance Minister Wolfgang Schäuble said that Europe has fared well in the past by not renegotiating previously agreed treaties after each election. "That makes no sense," he said. "And that's why I believe we will also convince the new French president and the new French government of that."

Schäuble emphasized that previous commitments in the EU are independently valid regardless of elections in individual member states. "We have clear agreements in Europe," he said.

Schäuble received additional support from Luxembourg Prime Minister Jean-Claude Juncker, who is the president of the Euro Group of euro zone finance ministers. Juncker, who has already spoken to president-elect Hollande, told German public broadcaster ZDF: "I made clear to him that some things are OK and that some things are not. What is impermissible is a total breakdown of the agreed fiscal pact. Many will not go along with that." However, Juncker said there was understanding in Europe that growth impetus was needed.

Foreign policy expert Polenz said he feels certain Hollande will ultimately adhere to the status quo. "He will see that the course agreed in the fiscal pact cannot be questioned if we want to keep turbulence on the capital markets from driving up interest rates on government bonds again," he said.

In a similar vein, Elmar Brok, an influential German member of the European Parliament in Brussels with the CDU, added: "In 1981, François Mitterrand had one-and-a-half years to correct his Socialist course. Hollande only has until he takes office." At the very latest, he'll have to fall into line by the EU summit in June, for the sake of France's "own interest," he added.

In order to make it easier for Hollande to veer away from his harsh campaign rhetoric and minimize the risk he may deviate from a course of austerity, Merkel herself has helped put a focus on growth, the issue that is so important to the new French president, higher on the agenda. However, the chancellor will oppose any talk of boosting growth with new debt.

During Monday's press conference, Merkel held something verging on a keynote speech, hammering home the necessity of limiting new borrowing. Instead of stimulus programs, Merkel is pushing for structural reforms, more targeted use of EU funds and greater involvement by the European Investment Bank, the EU's financing institution. The chancellor said the issue would be discussed with Hollande in a "very friendly manner." One could also interprete that to mean: We'll manage to talk him out of his spending wishes.

Still, even if Hollande and Merkel have different ideas on how to kickstart the economy, a compromise looks possible. It is likely that the EU member states will devise a growth pact as soon as the June summit that would allow both Hollande and Merkel to save face.

It appears that, in this time of crisis, both sides are emphasizing the pragmatism that is needed. "Shaping opinion has never been easy in Europe," Merkel said with a smile, "but it has always succeeded." In addition, there is definitely hope that, as happened with Sarkozy, this pragmatism will foster a more intimate relationship between Europe's two most important leaders. And who knows? Maybe we'll soon be talking about the "Merkollande" duo. 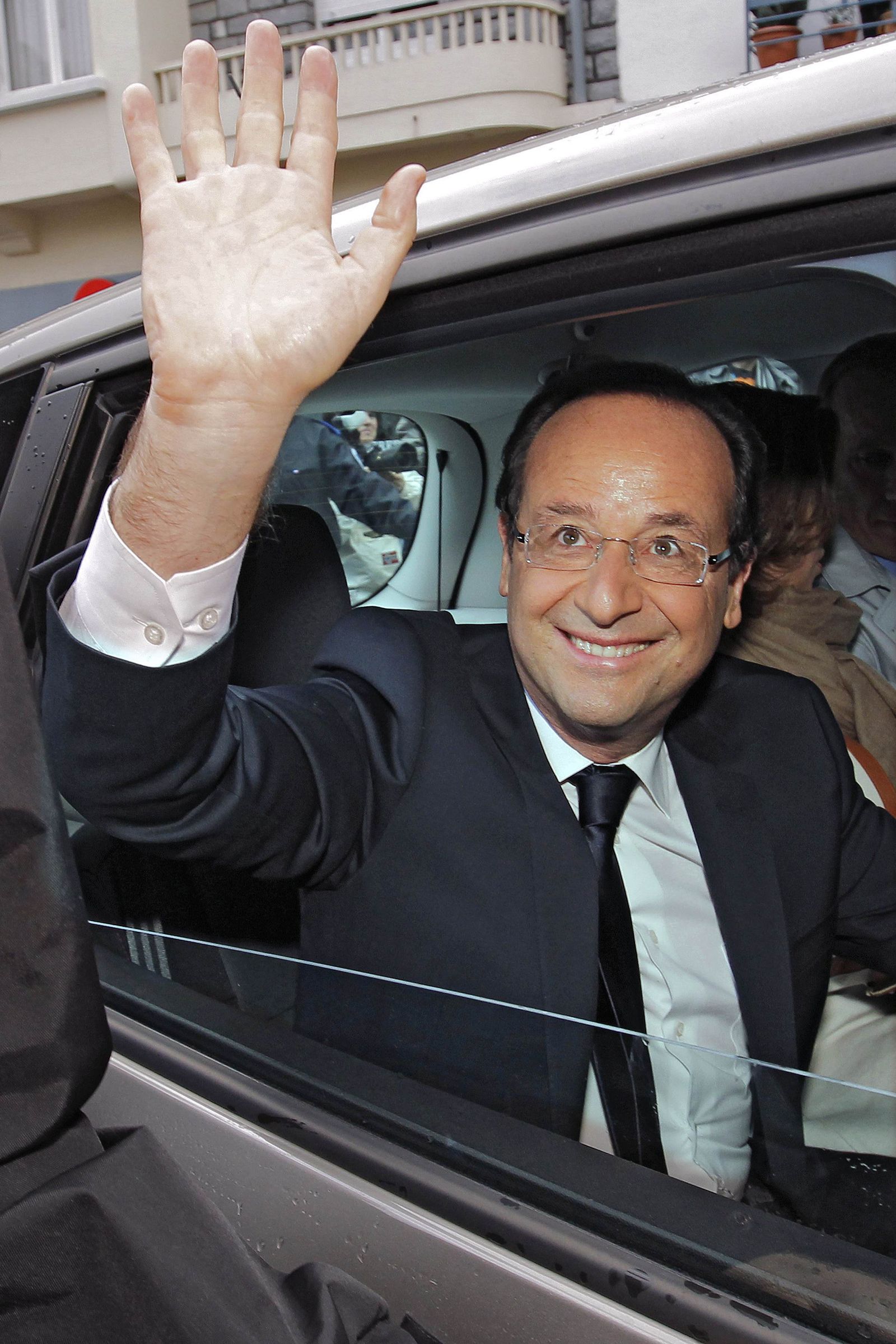 François Hollande is due to meet Angela Merkel next week.