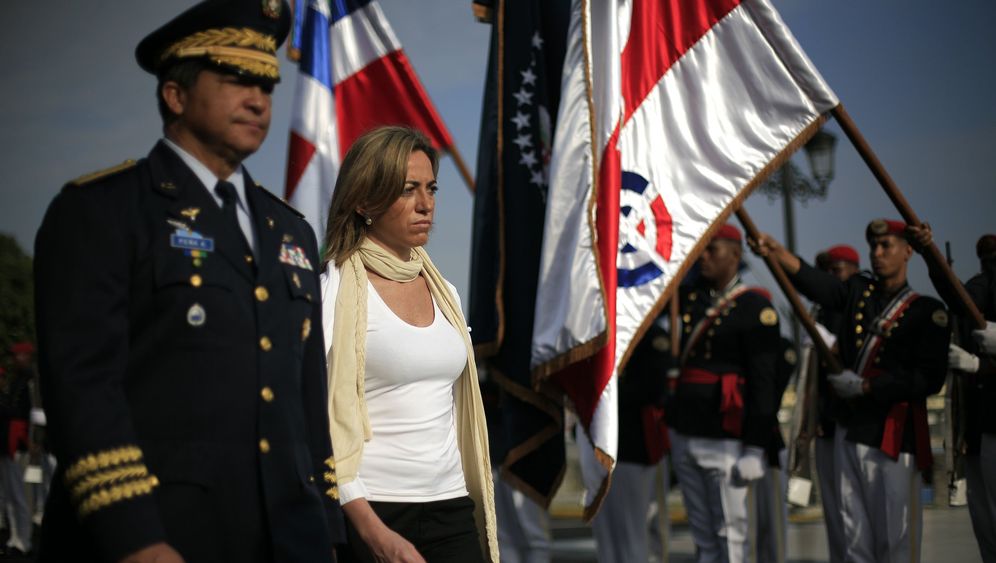 Miquel is in command until a quarter to nine in the morning. Then Carme Chacón picks up her son, walks to the elevator and takes it from her apartment on the 11th floor of the Spanish Defense Ministry down to the garage.

When she reaches the garage, an armored Audi A8, its engine running, is already waiting for her, as are a female bodyguard and Chacón's adjutant. "The boss is coming," says Colonel Elena Carrión, 44, glancing at the elevator floor indicator. Then she tucks Chacón's thick briefcase and a stack of daily newspapers into the trunk of the car.

Chacón, 39, a petite blonde, is Spain's first female defense minister. She is in charge of more than 128,000 soldiers and a budget of over €9 billion ($12.1 billion). On this day, she is on her way to the Torrejón air force base to look at a new fighter-bomber. But the first item on the minister's agenda on this cold March morning in Madrid is to take her son Miquel to kindergarten.

Miquel, a serious-looking blonde boy who will be two in May, is growing up in the ostentatious Defense Ministry building, where he waves to members of his mother's staff. A pragmatist by nature, Chacón chose to live in the ministry, which has its own kindergarten, so as not to waste time traveling between her home and her workplace.

Visits to the Kindergarten

She leaves the garage, walks with her son across the large courtyard, tottering in her high heels, and disappears behind a tall metal fence. She makes a point of coming to the kindergarten as often as possible, between appointments and before leaving on trips, "to give Miquel a kiss" or to pick him up in the evening.

"I manage as best I can, just like all women who have to make time for their families and a job," says Chacón, sitting on the back seat of her official car. "I suffer when I have to be away from him for days at a time." But, she adds, all working mothers have the same problem.

The politician likes to portray herself as one among many, as a mother who happens to work, nothing more. But it was far from normal for Spain when the Socialist Prime Minister José Luis Rodríguez Zapatero appointed the successful member of parliament for Barcelona as his defense minister after winning reelection in April 2008. Images of a heavily pregnant Chacón reviewing an honor guard upon taking office, while the commanders of the armed forces saluted her, quickly circled the globe. She even made it onto the cover of the New York Times.

The prime minister spoke of an educational project when he placed the young Socialist, in her seventh month of pregnancy, before the troops. A few diehards protested, saying that entrusting the defense of Spain to a pregnant Catalan was an "insult to the armed forces." When she promptly ordered access to sports, recreational and dating sites on the Internet blocked during working hours, there was grumbling in the barracks. But the commotion has died down by now.

"The military brass have accepted me," says Chacón after two years in office, noting that the soldiers have behaved in an "absolutely professional" way. This is also because rank is paramount in the military, says her adjutant Elena Carrión, a former attorney. "Gender is irrelevant," she notes. Nevertheless, she and Chacón have always been the subject of "close scrutiny."

The soldiers like Chacón, who doesn't even try to act like a member of the military and isn't afraid of appearing feminine. Men in their blue airman uniforms stand at attention, their chins held high, when she arrives at the air force base. The minister is wearing a tight brown pants suit with jingling gold earrings and high-heeled shoes. In an icy wind, she climbs into the cockpit of a fighter-bomber, smiles at the pilot and shakes everyone's hand. "She treats everyone just as politely, regardless of rank," says Carrión.

This fragile-looking blonde is a perfectionist, the members of her staff groan, saying: "She has character." They also point out that she likes to make decisions, and likes to do so on her own. On the day of her return from six weeks of maternity leave, she replaced the entire military leadership, against the advice of her predecessor, with unconventional officers, ignoring the military's promotion regulations in the process.

Chacón places absolute trust in a handful of staff members, such as her secretary, who she brought with her from her previous post as minister of housing. She edits her own speeches, which are written by a political adviser. She reads dossiers untiringly in her office, in the car or on planes. She usually skips official dinners.

Even conservatives, like member of parliament Celia Villalobos, have few complaints about Chacón, except perhaps that she uses her appearances in the parliament to boost her image or that she is "dogmatic." But no one questions her abilities.

Shadows of the Franco Era

The minister recently visited Haiti as a representative of the European Union (Spain currently holds the rotating EU presidency). After the January earthquake that devastated parts of the country, she sent a Spanish naval vessel, the Castilla, to the island of Hispaniola, which is shared by Haiti and the Dominican Republic, with 450 Spanish soldiers on board. "We must rebuild, and do a better job of it than was done at previous opportunities," she demanded in an address.

On the same day, former US Presidents George W. Bush and Bill Clinton were met with catcalls in the capital. Chacón, on the other hand, was greeted by cheering children in the town of Petit-Goave. Her military doctors gave vaccinations to survivors, cared for the injured on the Castilla and helped deliver babies. Chacón, who normally has a cool demeanor, was smiling and seemed relaxed.

She describes herself as a pacifist, like the majority of young Spaniards today. Her primary goal, she says, is to "reconcile society with the armed forces." She is doing her best to eliminate the shadows of almost four decades of dictatorship. She recently honored veterans who had revolted against Franco. She confesses that she was "deeply touched" by this act of restoring the honor of people who had been "forgotten" during the democratic era.

Chacón identifies with the losing side in the Spanish Civil War. Only those who know the horrors of war can appreciate peace, she says. The example set by her grandfather, an anarchist, shaped her way of thinking. He was sent to the front at 15, locked up by Franco's supporters and was later forced to live in exile. Chacón says that she owes her political vocation and her fighting spirit to him and to her mother.

Carme Chacón was born with a heart defect in the Barcelona suburb of Esplugues de Llobregat. A sickly girl, she attended a Catholic high school, where she played basketball on the school team. The experience taught her not to allow defeats to get her down. "I fight for everything. I hate losing," she says today. She paid her way through law school by working as a sales clerk, and at 18 she joined the Catalonian Socialists. She later met her husband, Miguel Barroso, through politics. He was Zapatero's first government spokesman, and he still serves as an adviser to the prime minister.

"We Spaniards have come a long way since the end of Francoism," says Chacón -- particularly, she adds, in the struggle for equal rights. Thanks to emancipation, she is now able to depend heavily on women to help modernize the country's professional army. Until 22 years ago, woman were not admitted into the military, but now Spain is second only to France when it comes to the proportion of women in its military -- 12.2 percent.

A recent study by the Madrid-based Center for Sociological Research (CIS) concluded that the armed forces are the institution that Spaniards trust the most -- despite the fact that Spain's Afghanistan mission is controversial, partly because it is expected to cost €500 million in this crisis-ridden year. Chacón recently had to defend, in parliament, a decision to double Spain's troop contingent in Afghanistan to 1,551 soldiers.

Some 28 Spaniards have already died in Afghanistan. The minister last brought a dead soldier home in early February. "My bitterest moments are when I have to notify relatives of a death," says Chacón. She cries unabashedly at funerals. Nevertheless, she rejects the conservatives' demands that she admit that Spain is at war in Afghanistan.

It has taken Chacón, a working mother, only 24 months to prevail in macho Spain. In opinion polls, she is the second-most popular politician in the cabinet, next to the interior minister. A men's magazine dubbed her one of the 100 most desired women worldwide, and the World Economic Forum in Davos, Switzerland, listed her as a "Young Global Leader."

For the Socialists, she is considered a hope in the economic crisis. She plans to campaign on behalf of her party in a key regional election in her native Catalonia in the fall, and Prime Minister Zapatero could appoint her to one of the vice-presidential posts by this summer. There are even rumors in party circles that Zapatero is grooming her to become his successor in 2012.

Chacón's only response to such speculation is to say: "I will go where the prime minister decides to send me."