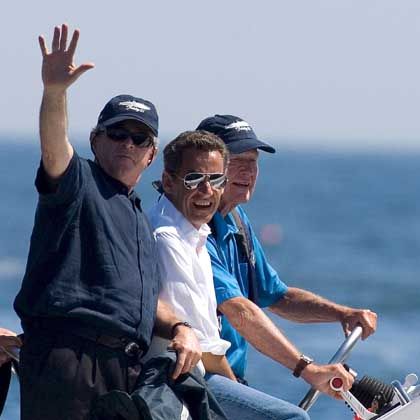 The entire Bush clan made an appearance at Walkers Point in Kennebunkport -- from current US President George W. to his father, former President George H.W. Also present was George W.'s brother Jeb, the former governor of Florida, as were the current first lady Laura Bush and former first lady Barbara, along with their children and grandchildren. It was not a political meeting between statesmen but a family reunion with a French addition.

Sure, global problems were apparently as big a part of the visit as burgers and hot dogs. There is enough to be dealt with, after all: Iraq and Afghanistan, plus problems on the international financial markets. But once again, the images and impressions Sarkozy wanted to leave behind took precedence.

Although he does not speak English fluently, and although Bush does not speak French at all ("I can barely speak English," the US president quipped), the visit was meant to emphasize one thing more than anything else: that the physically unimposing Sarkozy is used to dealing with the world's powerful in a completely relaxed way.

There must be an explanation, after all, for the presence of Chirac's successor in the United States -- given that many people in France are none too pleased about the circumstances of the luxury vacation, which is reminiscent of the expensive yacht holiday off the coast of Malta that Sarkozy treated himself to immediately following his electoral victory. At the time, the embarrassing public relations blooper put a serious dent in Sarkozy's image as a man of the people. This time, too, it remains unclear how much the French president had to shell out for the villa in exclusive Wolfeboro, New Hampshire. The rent for the estate -- which comes with a private beach, three boats and a jacuzzi -- is said to be about $30,000 a week.

And so meetings and political activities were the order of the day. Hamburger diplomacy at the lunchtime barbeque organized by the Bush family was just the right thing for hyperactive Sarkozy (who jetted across the Atlantic earlier to attend the funeral of Cardinal Jean-Marie Lustiger). And since neither Tony Blair from Britain nor Silvio Berlusconi from Italy nor José Maria Aznar from Spain is still in office, Sarkozy used the opportunity to sharpen his profile as old Europe's allied leader.

Is the man from the Elysee Palace the US president's new poodle? Blair was mocked as "Bush's poodle" for years. Now Sarkozy and Bush are practically acting like sweethearts -- as if each were the other's best friend.

During his electoral campaign, Sarkozy outed himself as "Sarko, the American." And during a trip to Washington, he attracted attention by praising US policy and dealing out jabs at his despised rivals in Paris. With his short visit with the Bush family, he drove that message home. After a 50-minute, head-to-head talk and a 25-minute boat trip -- what would such a visit be without a bit of fun? -- Sarkozy reminisced about the 250-year friendship between France and the United States and praised the latter as the "land of friendship" -- fully in the spirit of his host George W.

Wasn't there once a dispute about the US military engagement in Iraq? It seemed forgotten, just like the below-the-belt behavior of some US politicians, who decided to rename French Fries "Freedom Fries" in order to emphasize their political break with France. Had there not been dissent over US climate policy and the Kyoto Protocol? It seemed a secondary issue, a thing of the past -- just like the US boycott of Bordeaux and Burgundy wine.

It was chicken soup for Bush's soul. A solid 65 percent of US citizens now take a negative view of their president. His international ratings are similarly devastating: According to one poll, citizens in 42 out of 47 countries believe Washington is primarily pursuing its own interests when it claims to be promoting democracy. The Bush administration's power politics are being criticized the world over.

That makes the friendship with Sarkozy all the more satisfying -- overshadowed only by the absence of Cecilia, the French president's wife.

The picnic invitation was sent by first lady Bush to her colleague in France in all due form -- as if the two husbands were merely an addition for the sake of protocol. But then, out of the blue, Madame Sarkozy came down with a sore throat. That's how the presidential staff told the story, in any case -- under no circumstances was the Franco-American rapprochement to be endangered.

Unfortunately, Cecilia was in top form just days before. Worse still, she was taking a walk in T-shirts and shorts 24 hours later. "Cécilia coughs -- France and the United States catch a cold," wrote a concerned commentator at the Nouvelle République du Centre-Ouest newspaper.

But it looks like the French president's masculine manner was able to divert the looming debacle in this case too. He himself is to blame for the precarious medical condition of his wife and daughters, Sarkozy said after giving Laura Bush a peck on the cheek.

"The worst thing is that she caught it from me," he confessed. With that, the manly friendship's meltdown had been avoided, and the state of detente preserved.