SPIEGEL ONLINE: Mr. Caldwell, Switzerland recently banned minarets in a referendum. What was your first thought when you heard the news?

Caldwell: The most stunning thing about it is the gap between the clear rejection of the ban in public opinion polls and the clear approval given in the actual vote. It means there is an official discussion of Islam and that there is a subterranean discussion. That should worry Europeans.

SPIEGEL ONLINE: Are you suggesting there is no open discussion about Islam in Europe?

Caldwell: I think these things are getting much more openly debated than a few years ago. In the Netherlands and Denmark you do have a contentious debate. I think a lot of Danes and Dutch aren't really proud of the way their populist parties are discussing the issue of immigration, but it's generally much better if things are discussed openly.

SPIEGEL ONLINE: Where, in your opinion, is it not possible to speak openly about it?

Caldwell: In countries like France there are laws against all sorts of speech. That has a very chilling effect. Many people are frightened about negative consequences if they say how they really feel. Sometimes even to the pollsters, as the Swiss example shows.

SPIEGEL ONLINE: In your book, "Reflections on the Revolution in Europe," you cast a skeptical light on Europe's relationship with its Muslim immigrants. In your view, do Muslim immigrants pose a threat to the Continent?

Caldwell: I don't speak of a threat, exactly. This is a very important distinction. The debate up until now has been marked by two extremes. On the one side you have the doomsayer extreme, the people who say Islam is "taking over" Europe. On the other, you have people with the point of view that there's no problem at all, except racism. I think both positions are wrong, and I have tried to set a new tone.

SPIEGEL ONLINE: Nevertheless, when reading your book, one leaves it with the impression that you think Europe will have real trouble integrating its Muslim immigrants.

Caldwell: Islam poses difficulties that other immigrant groups do not. Part of it is the growth of political Islam in the world in the last half-century. A large minority of European Muslims feel solidarity with the Muslim community abroad, and they feel at the same time that the West is at war with this world. That makes the transition into a European identity more difficult. But I think the problems at the cultural level are more important.

SPIEGEL ONLINE: Such as?

Caldwell: A lot of overly optimistic people expect Muslims to give up, or to modify, their religion over time. They're going to change in some way, but we don't really know how. And attitudes around religion provide a lot of potential for conflict -- the attitudes towards women, towards family relations, sexual freedom or gay rights.

SPIEGEL ONLINE: The percentage of Muslims in the European population is very low. The total is about 5 percent.

Caldwell: Right. The population of Western Europe is about 400 million, and there are about 20 million Muslims. Nevertheless, the population (of Muslims) continues to grow.

SPIEGEL ONLINE: But to what extent is it really growing? You base this argument on a higher birth rate, but a number of studies suggest that in the second or third generations, immigrants have birthrates closer to the national average.

Caldwell: That is true. There are two things that will cause the immigrant descended population in Europe to grow in the coming years. One is that immigrants are still coming and the other is that birth rates, although they are falling, are still higher. But the real issue is not the size of the immigrant population. It is that their culture needs to be accommodated within Europe in a way that requires Europe to change its structures. During the past 20 years, mainstream society has accommodated the immigrants on a number of issues. Sometimes the issues are small, like prayer rooms or work spaces. And sometimes the issues are major, as illustrated by the ruling of a court in Lille, France, which in 2008 annulled the marriage of a Muslim woman because the bride was not a virgin.

SPIEGEL ONLINE: And that is going to change Europe's character?

Caldwell: As I say in my book: When an insecure, malleable, relativistic culture meets a culture that is anchored, confident and strengthened by common doctrines, it is generally the former that changes to suit the latter.

SPIEGEL ONLINE: Do you think the European mainstream culture is weak because it is secular?

Caldwell: Islam is the second biggest religion in Europe. But that is true only if you're thinking statistically. If you're thinking culturally and spiritually, it looks like the first religion of Europe. There are many, many more articles on the front pages of newspapers about what Islam says about this and what the Koran says about that than there are articles about Christian theology. They are full of debates between Muslims and non-Muslims addressing question about what the Koran says about honor killings and the headscarf. What Christianity says is not really a matter of much importance to anyone.

SPIEGEL ONLINE: Is that cause for regret?

Caldwell: I don't want to offer Europe any advice. But it strikes me that a lot of Europeans look at the difficulties of a multicultural society as pitting enlightened Europe against barbarous Islam. It is a mistake to look down on Muslims' religiosity. There is a richness to the religious way of looking at the world that Europeans lack. That's also one of the reasons I think the presence of so few Muslims makes many Europeans nervous.

SPIEGEL ONLINE: How would you assess the situation in Germany?

Caldwell: Germany is a very special case in a couple of ways. There's probably not a single other country in Europe where the Muslim community is such a strong and homogenous one. I'm very fond of Turkish Germany and it reminds me a lot of Chinese America. You have some very successful people, but you have a very low level of integration.

SPIEGEL ONLINE: There are intellectuals like Bassam Tibi and controversial Tariq Ramadan who are calling for a Euro Islam and say that Muslims have no problem adopting European values.

Caldwell: Islam will definitely take on a European cast. That's exactly what happened to Islam in every place it has ever gone. And Muslims can certainly be good Europeans. But non-Muslim Europeans will be the judge of that, too. The Swiss referendum shows that Muslims arrive at a way of being European and believe that they've met the Europeans at the halfway point. But that does not mean non-Muslim Europeans feel the same.

SPIEGEL ONLINE: You have left one major question unanswered in your book: What's the solution?

Caldwell: I don't have an answer, and I am often criticized for that. But offering one is not my purpose. Just laying out the conflict is challenging enough, since that has always been obstructed in Europe by taboos and wishful thinking.

SPIEGEL ONLINE: To what extent are your views shaped by the fact that you're an American?

Caldwell: As an outsider, one has the advantage of seeing parallels between European countries as well as differences. I come from a country that has experience with a multiethnic society, and America's history has some lessons for Europe. Just because the European Muslim community is a small one does not mean it is uninfluential or that it can be ignored or that the problems surrounding it are trivial and will go away. Blacks have traditionally made up about only about 10 percent of the US population. But we have a horrible history of race conflict that has shaken our country for centuries.

SPIEGEL ONLINE: Is America more successful when it comes to integrating immigrants?

Caldwell: For now, yes. I think the first reason is the ruthlessness of the American economy. You either become a part of it or you go home. There are more foreigners in the workplace, and that's where a lot of integration happens. And because most immigrants are in the workplace, you never hear, as you do in Europe, that immigrants don't want to work. No American would dream of saying that.

SPIEGEL ONLINE: Why do you think that's the case?

Caldwell: There is no welfare state on the scale of that in Europe, and I think welfare states are a bad fit for large-scale immigration. In an ethnically diverse society, people are less familiar with each other, and they are correspondingly less willing to pay taxes for social benefits. Two-thirds of the imams in France are on welfare. There is nothing wrong with being an imam. But I don't think the French are very happy about paying what is effectively a state subsidy for religion in that way. 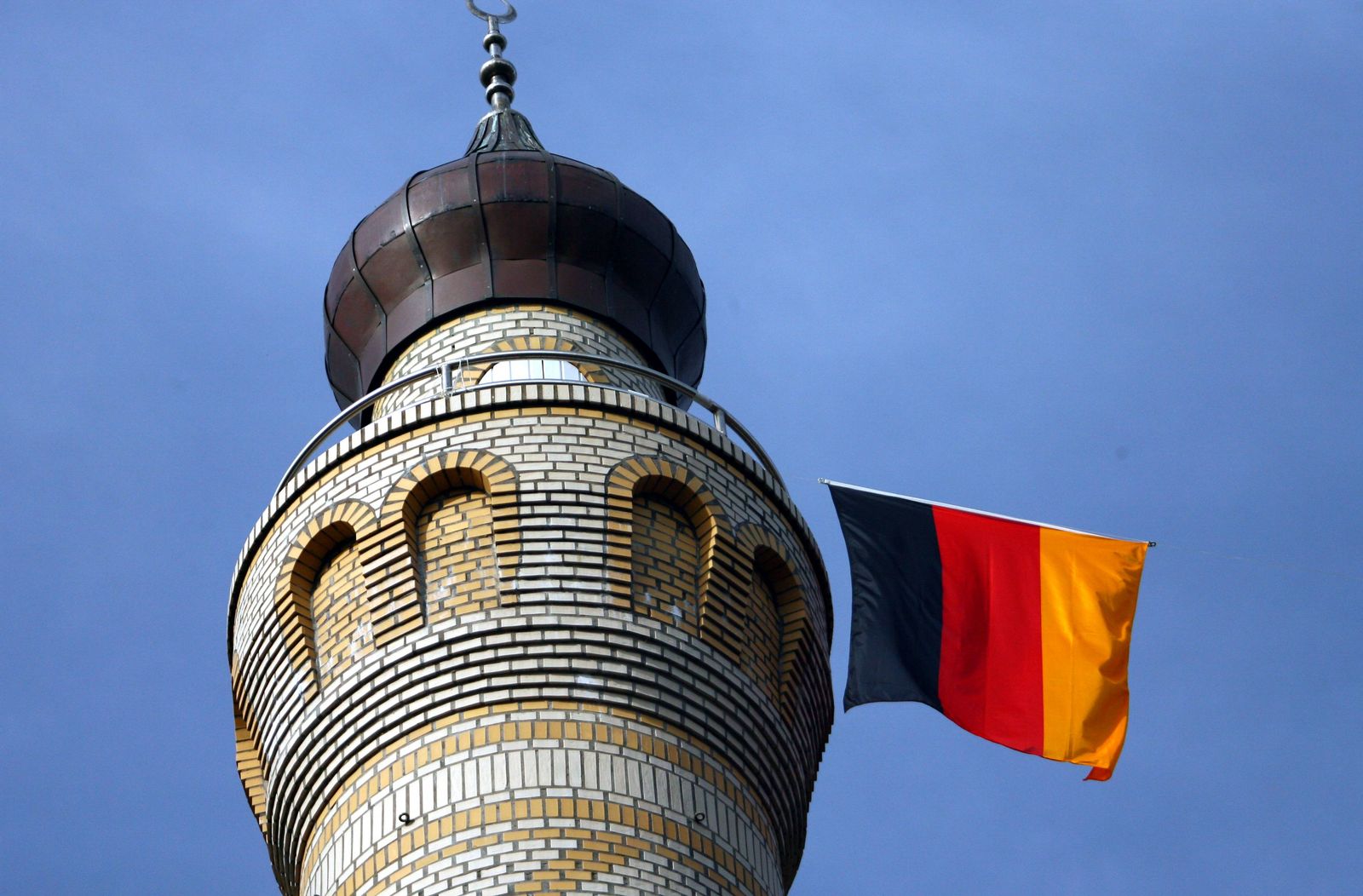 A minaret in the German town of Rendsburg: "It is a mistake to look down on Muslims' religiosity."