The promise was clear and the path leading to an ambitious goal well defined. The German power industry planned to install wind turbines with a capacity of about 10 gigawatts off Germany's North and Baltic Sea coasts by 2020. This would replace eight large nuclear power plants. The ambitious plan even called for meeting 25 percent of German electricity requirements with climate-friendly offshore wind farms by 2050.

Germany's four major electric utility companies -- RWE, E.on, Vattenfall and EnBW -- spearheaded the effort, creating countless glossy brochures for investors and customers that outline their vision of Germany's green future. It consists of hundreds of wind farms, all located 20 to 40 kilometers (12.5 to 25 miles) off the German coastlines, which would supply massive amounts of CO2-free electricity to all parts of Germany via specially built high-voltage lines. Millions of households and industrial plants are to be supplied with clean energy generated by wind, which blows constantly at sea.

The new era was to be ushered in by the start-up of the Alpha Ventus wind farm last spring. After a brief period of test operation, the electric utility executives ceremoniously announced at the time, additional offshore wind farms would quickly be erected in Germany, eliminating the need for old coal-fired power plants.

But little progress has been made since then, at least not in Germany. E.on and other electric utilities are building one wind farm after the next abroad, but at home their activity has been largely limited to securing licenses for areas where they want to operate in domestic waters. In fact, EnBW is the only company so far to have built its own functioning offshore wind farm. EnBW's small Baltic 1 operation in the Baltic Sea has an output of only 48 megawatts and doesn't even come close to that of the Alpha Ventus research wind farm operated by Vattenfall, EWE and E.on.

RWE hasn't even built an offshore facility in Germany yet. And E.on, one of the biggest operators of offshore wind farms worldwide, plans to decide in the coming months whether to finally approve the investment funds for a large-scale project in the North Sea. The company's board of directors already claimed last year that the funds have been approved.

There are good reasons for the companies' hesitation. Behind the scenes, lobbyists for the power industry are trying to convince the German government to agree to better terms for their offshore wind farms. This isn't the first time. Following a crisis meeting two-and-a-half years ago, the industry managed to increase subsidy rates from the 9 cents per kilowatt hour that was originally planned to 15 cents. Now, under the so-called Renewable Energy Act (EEG) assessment, consumers will even be expected to pay more than 18 cents per kilowatt hour for electricity from offshore wind farms.

This is three times as much as the price of electricity on spot markets, and more than twice as much as the operators of wind farms on land receive for their green energy.

There is nothing new in the arguments industry executives presented at the Environment Ministry in Berlin to support the most recent proposed price increase, which are summarized in a study conducted by management consulting firm KPMG.

Industry officials argues, for example, that the demands of environmental and coastal protection assessments are significantly higher and more costly in Germany than in other European Union countries. Besides, say the electric utility executives, the rapid connection of wind farms to the power grid is not guaranteed, and many banks are still not prepared to invest money in risky projects designed for the very long term.

The industry believes that higher subsidy rates could reverse this obstacle. And to prevent the chorus of outrage from growing too loud, it has come up with what it calls a cost-neutral solution: Although the subsidy rate would go up considerably, its duration would be shortened -- from about 14 to 9 years, according to the current discussion.

The total cost, the electricity lobby argues, would therefore remain unchanged for the government and taxpayers. The key difference is that the industry's plan would greatly facilitate bank financing. Otherwise, the plan has no significant benefits or drawbacks.

But this is only part of the truth. In the first nine years, at least, electricity customers could expect to see substantially higher EEG assessments on their electricity bills, while the utilities' profits would go up considerably. For them, the implementation of the model would be a real coup. They would receive the government subsidies within a significantly shorter time period and, after nine years, could sell the electricity from the wind farms, which will have been written off by then, at market prices.

As a result, the value of the operating companies would rise on the utilities' balance sheets, and so would the profits from the offshore wind farms. According to KPMG calculations, profits would go up from about seven percent today to almost 12 percent.

The industry hasn't been able to make such profits with its newly built, conventional coal and natural gas power plants in years. Nevertheless, the German Environment Ministry can apparently reconcile itself with the model. Its reasons are entirely pragmatic. According to ministry officials, the construction of offshore wind farms is now so far behind schedule that it is a pleasant surprise when anything happens at all. 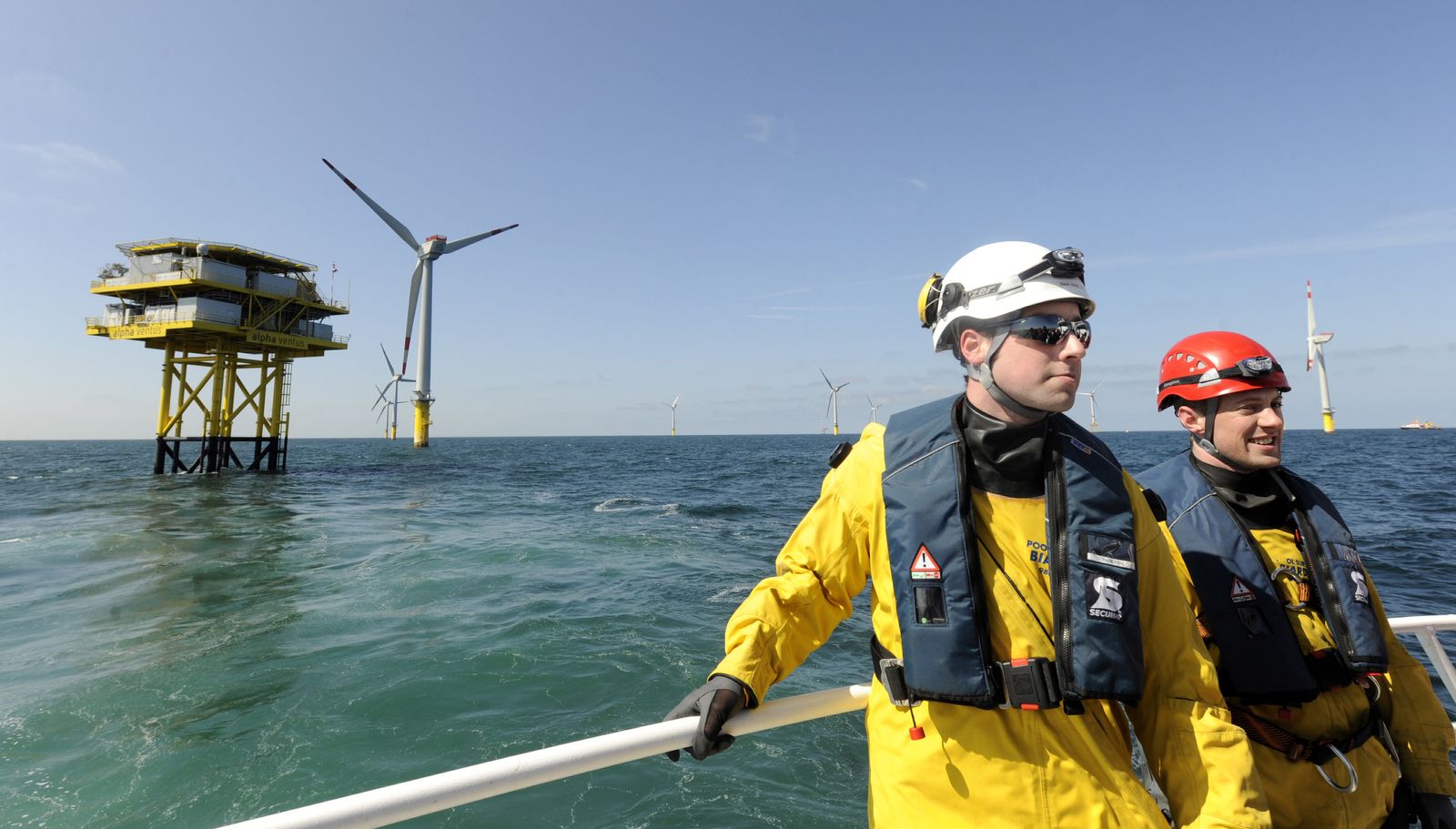 Technicians inspect the Alpha Ventus wind farm near the German North Sea island of Borkum. The 12 wind turbines are intended to provide electricity for 50,000 households.