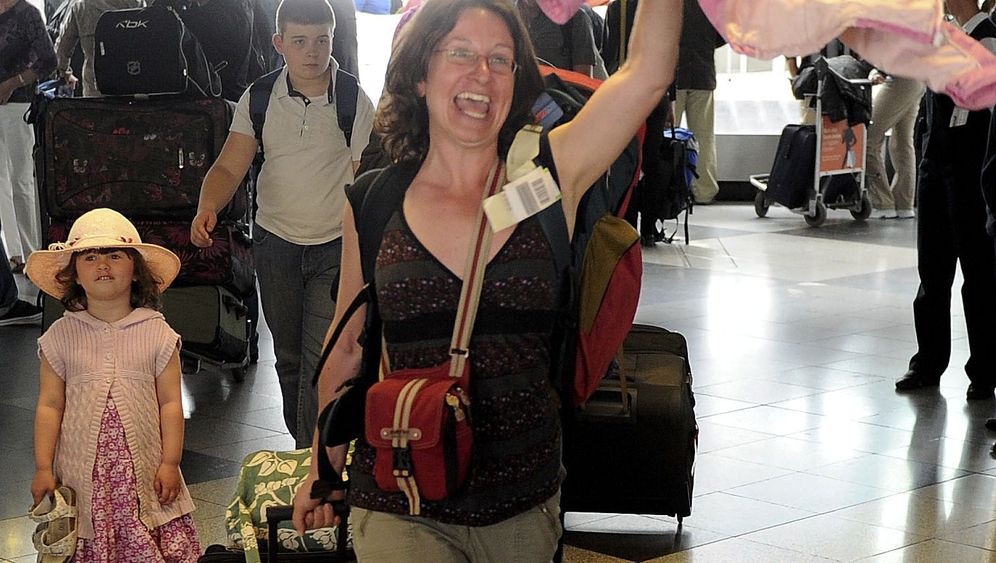 On the sixth day of aviation disruptions caused by Iceland's Eyjafjallajökull volcano, hope is in sight for tens of thousands of stranded travelers across Europe as flights begin to slowly resume in several countries. But it appears to be too soon to sound the all-clear: British authorities are warning that a new ash cloud is approaching the British Isles and could lead to further closures of UK airspace.

On Tuesday morning, flights were taking off at a number of German airports, including Frankfurt, Munich and Berlin. German air traffic control had originally closed German airspace up until 2 p.m. (1200 GMT) on Tuesday, but on Tuesday morning it extended that ban until 8 p.m. (1800 GMT). It is, however, allowing flights under special visual flight rules, whereby planes are flown underneath the ash plume. On Monday, the transport ministers of the 27 European Union member states had agreed to a relaxation of the ban on flights.

At Germany's largest airport, Frankfurt, around 25 aircrafts took off and a similar number landed on Monday. On Tuesday, the number of flights should be significantly greater, according to a airport spokesman. Lufthansa, Europe's largest airline, is planning around 140 flights from Frankfurt on Tuesday.

At Munich Airport, Germany's second largest airline Air Berlin is planning to resume its regular schedule on Tuesday. Lufthansa also intends to rapidly resume as much of its normal schedule as possible, said airport spokesman Peter Prümm. He said that the airport was hoping to process 457 flights on Tuesday, around 40 percent of the total on a normal day. Destinations include German cities as well as long-haul routes to Beijing, Phuket and Cairo.

At Berlin's Tegel Airport, the first flight took off shortly after 6 a.m. (0400 GMT), destination Palma de Mallorca. A number of flights took off and landed at Berlin's two airports on Monday evening, as was the case in several other cities, including Düsseldorf, Stuttgart and Hamburg. Despite the special flying rules, dozens of flights will still be cancelled, with many cancellations expected at Berlin's Schönefeld Airport in particular.

EU transport ministers decided on Monday to partially reopen European airspace. The air space will be divided into three zones, depending on the concentration of ash, and will only be closed where a certain concentration is exceeded. Decisions will be based on satellite images and other data.

The EU had earlier come under criticism for not taking action on the crisis earlier and for not having shown leadership. The EU has now admitted to deficiencies in how the decision to close parts of Europe's airspace was reached. EU Transport Commission official Helen Kearns told the BBC that different countries had reached different conclusions based on the same information and that the decision-making process had been loosely coordinated.

All Spanish airports are open and the Spanish government has offered to let other European countries use its airports as a staging point to help travelers get home. Airports have reopened in Austria, the Czech Republic, Estonia, Hungary and Turkey, with airspace in Belgium and Denmark due to begin opening on Tuesday morning. France and Italy also plan to start resuming flights on Tuesday. Finland, however, has closed its airports again until Tuesday afternoon, and Polish airspace was also closed on Tuesday morning.

Meanwhile the prospects for an early normalization of air transport in the United Kingdom have once again deteriorated. British air traffic control announced on Monday evening that a new volcanic ash cloud was approaching from Iceland. The eruptions of the volcano in Iceland had once again become stronger, the authorities said, adding that an ash cloud was heading south and east toward Britain. British Airways has already canceled all its short-haul flights for Tuesday.

British air traffic control is however sticking to its plans for a partial reopening of British airspace on Tuesday morning. Flights were set to resume at 8 a.m. local time (0700 GMT) in Scotland, with restrictions in the north of England and Wales to be lifted by 2 p.m. (1300 GMT) London's airports would remain closed for the time being, the authorities said. On Monday, Prime Minister Gordon Brown sent three Royal Navy ships to bring stranded British holidaymakers home from Spain and the Channel ports.

The statement by British air traffic control regarding new ash clouds appears to contradict recent statements by the Icelandic Meteorological Office in Reykjavik, which has said that Iceland's Eyjafjallajökull volcano is hardly sending any more ash toward Europe. The volcano is still just as active as ever, meteorologists said, but it is releasing increasing amounts of lava instead of steam and ash. The column of smoke above the volcano is also not as high as it was.

The results of a test flight by a Falcon 20E research aircraft from the German Aerospace Center (DLR) are expected later on Tuesday. The plane carried out a three-hour flight over Germany on Monday to investigate the ash cloud. The aircraft apparently found traces of the ash cloud at a range of heights.

Several European airlines, who could be facing losses running into billions, had over the weekend and on Monday criticized the airspace closure and demanded the flight ban be lifted, after conducting test flights. Airlines have also been critical of computer simulations run by the London-based Volcanic Ash Advisory Center, which have provided the basis for the airspace closures.

The ban was prompted by fears that the volcanic ash could seriously damage planes' engines. A 1989 incident involving a brand new Boeing 747 operated by Dutch national carrier KLM resulted in a near crash and $80 million in damage to the aircraft after the plane flew through a volcanic ash plume in Alaska.

The transport committee of the German parliament, the Bundestag, will consider the possible consequences of the flight ban in a special session on Tuesday. The committee members want to talk to representatives from government, airlines, air traffic control, airports and the German Weather Service (DWD) in order to take stock of the situation and discuss possible measures.

Meanwhile, several German politicians -- including members of the governing center-right Christian Democrats and the business-friendly Free Democratic Party -- have been sharply critical of how Transport Minister Peter Ramsauer has managed the crisis. "Ramsauer has to ask himself how the differing assessments of the situation can be explained," said Andreas Lämmel, a member of Angela Merkel's CDU who is chair of the Bundestag's economy committee, in remarks to the newspaper Bild. "It is not acceptable to rely solely on measurements that are highly controversial, given the immense economic damage, especially in the area of tourism."

Horst Friedrich, a transport expert with the FDP, said that Ramsauer had been "too rigid" in focusing exclusively on the issue of safety. Ramsauer had not paid enough attention to the problems of people stranded abroad who were desperate to get home, he said.

In remarks to SPIEGEL ONLINE Monday, Frank-Walter Steinmeier, the floor leader for the center-left Social Democratic Party, accused the government of "negligence" in dealing with the travel chaos. "We should be able to expect that the consequences of a natural disaster are dealt with in a professional way," something that the government was not doing, he said.

On Sunday, Ramsauer had said that he would not allow himself "to be put under pressure by airlines" and emphasized that safety was the top priority. He said he would never allow "the risk to passengers' life and limb to be offset against loss of revenue." Lufthansa CEO Wolfgang Mayrhuber responded to Ramsauer's comments by saying it was "outrageous to accuse Lufthansa or the German airlines of putting profit before safety."

The German pilots' union Cockpit has expressed concerns about the gradual resumption of flights. "In our opinion, it cannot be completely ruled out that there could be incidents," Cockpit spokesman Jörg Handwerg told the television station ARD on Monday evening. "The pilots feel under pressure because they also feel an obligation toward their employers." Handwerg said that Ramsauer had buckled under pressure from the airlines in relation to the partial lifting of the flight ban. It was the pilots who would now be held responsible if there was an accident, he said.

Ramsauer rejected the criticism from Cockpit. "We have now allowed limited flights under special conditions in various zones, based on regulations and all the data that we have collected," he told the television station ZDF on Tuesday morning. Pilots had been telling him for days that all they wanted was for air traffic to get back to normal, he said. "That is the exact opposite of Cockpit's position," he said.

The International Federation of Airline Pilots' Associations (IFALPA) emphasized that safety had to be the top priority. "IFALPA believes that a return to flight operations in Europe may be possible but only on the understanding that these decisions are safety rather than economically driven," the group said in a statement Tuesday. "Historical evidence of the effects of volcanic ash on aircraft demonstrates that this material presents a very real threat to flight safety." 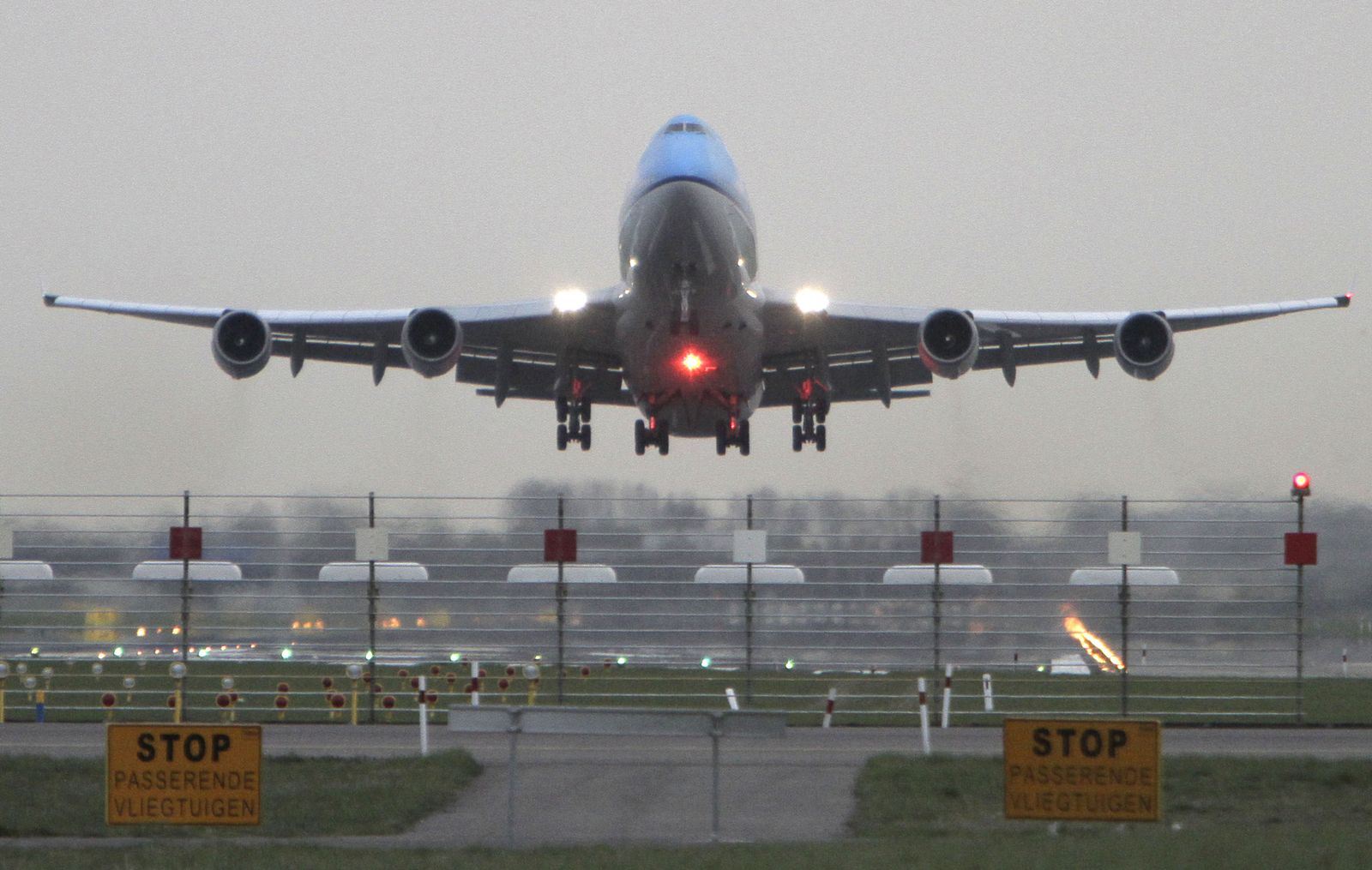 The first of three KLM passenger planes heading to New York takes off from Schiphol Airport in Amsterdam on Monday.