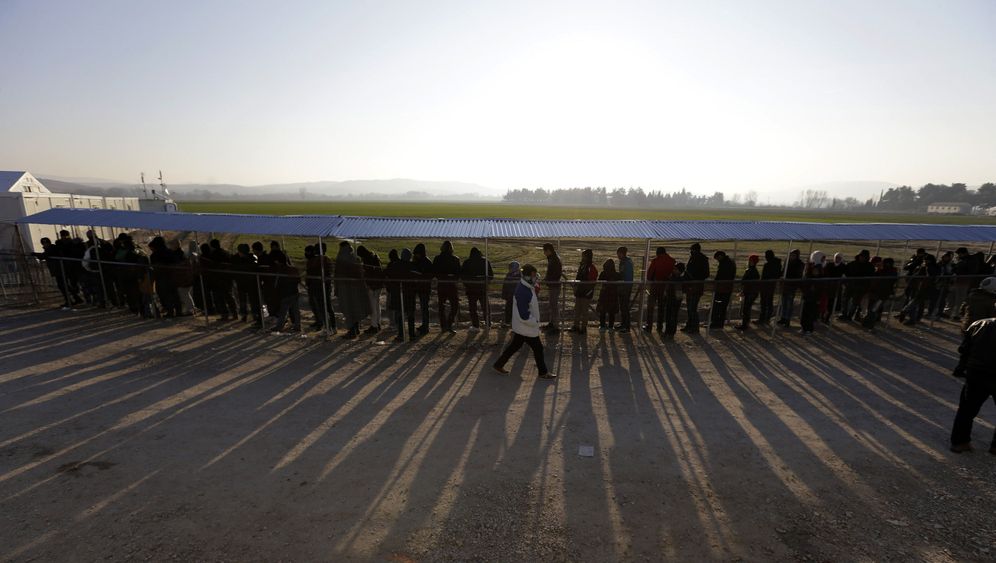 At five o'clock in the morning last Tuesday: Macedonia has once again closed its border, and just a few hours later, chaos reigns. Eighty buses with 4,000 refugees have been stopped by the Greek police 20 kilometers from the frontier and they are now waiting in a gas-station parking lot. Bus drivers argue, refugees jostle on the overfilled lot and overwhelmed police officers yell orders. "Macedonia, Macedonia," the people waiting scream, "open the border!"

But today, the border remains closed to most people. And if it were up to Brussels and the Germans, it would remain that way -- that is, to anyone not from Syria, Iraq or Afghanistan. Since mid-November, Macedonia has tightened its border controls and whoever isn't from one these three countries is turned away. Now, many people's dreams of Europe come to an end here, in Idomene.

For it has recently become clear that Turkey is both unable and unwilling to stop the flow of refugees. As a result, the EU is placing its bets on Macedonia, with a plan that has the support of European Commission President Jean-Claude Juncker.

Last year, the majority of the over 850,000 refugees traveling along the Balkan route went through Macedonia. If authorities have their way, that will come to an end. "Macedonia is our second line of defense," says a high-ranking EU official. Several EU states have approved the deployment of 82 officers in Macedonia with the task of improving border protection. Financial support is to follow.

If Macedonia reduces the number of people it allows into the country, it will lessen the pressure on Germany and Austria. It will also mean that more people will stay in Greece -- and, Brussels hopes, place additional pressure on Greece to better protect its borders.

Idomene is a case study of what would happen were Europe to seal its borders and shut down the Balkan Route, the path most migrants take on their way to Germany and the rest of Europe. The result would be a massive backup of hundreds of thousands of refugees in Greece.

And this in a country that is in a deep recession, and where every fourth citizen is unemployed. It is a country where angry farmers, teachers, doctors, lawyers, taxi drivers and ferry workers -- actually everyone -- is opposed to the government's austerity measures. And it is a country that is once again in danger of sliding into its next big political crisis. The country will face big problems if Prime Minister Alexis Tsipras can't find a compromise with the country's international creditors, who are pushing for tough reforms. Or if Greece is made to bear the burden of the refugee crisis.

When Macedonia closes its border for even just a few hours, thousands of people accumulate: including children, the elderly, pregnant women, sick people. There may be a reception center, with tents, blankets and toilets, directly next to the border fence with a capacity of 1,200 people, but when it's full, most people spend their nights outside, often for days at a time.

At the same time, thousands of people are arriving on the Greek islands every day -- over 67,000 in January alone. And according to UNICEF, more than a third of the arrivals are minors; almost two thirds of the people who are passing the Macedonian border are women and children. They are making the risky crossing in winter out of fear that the route to the north will soon be shut off. Some 400 people have already drowned this year, including many children. For now, the impending closure of the border is more of a draw than a deterrent.

Mukhtar from Herat, Afghanistan intends to wait at the border until it is open again, no matter how long it takes. He is 18 years old and travelling alone. He fled his country's poverty and hopelessness and almost drowned shortly before before reaching the Greek island of Chios, he says, but the Greek coast guard saved him. Like almost all of the other people here, he wants to go to Germany, "the only country where refugees are being helped." Apply for asylum in Greece? Mukhtar laughs. "Greece is like Afghanistan, there is nothing here for us refugees."

Mukhtar has the right passport and will likely ultimately be allowed to cross. But what happens to those who are not allowed to continue their journey? What does it mean for Greece if Europe is drawing its "second line of defense" here?

Many will try to cross into Europe anyway, illegally via the Macedonian border with the help of fake documents or by following the new routes through Albania and Croatia -- or by boat to Italy. But all others are stuck in Greece.

This despite the fact that since 2011, Germany has declined to send refugees back to Greece, which the Dublin Regulation stipulates, out of human rights considerations. The German Interior Ministry just extended the pause in deportations until June. According to a report by the Gemeinsames Analyse- und Strategiezentrum illegale Migration (Joint Analysis and Strategy Center on Illegal Immigration), many refugees in Greece live on the streets, even children and neo-nazis periodically hunt them down. The conditions for many refugees in Greece are described by the German authorities as "inhumane." And still, the country is potentially being turned into a giant refugee camp.

According to a confidential memo from the German Foreign Office, a backup of refugees would "inevitably lead to uncontrollable humanitarian conditions and security problems within days." Migration researcher Franck Düvell from Oxford University warns that it would lead to "downright apocalyptic scenarios": Greece would collapse within a few weeks, he believes.

Officials in Brussels are seemingly aware of this, which is why they are currently trying to balance partial border closings, the imposition of better controls in Greece and the public admonishing of Athens.

In a confidential, but perhaps not entirely accidentally leaked, report, the EU Commission describes the findings of its inspectors on the islands of Chios and Samos and on the land border with Turkey in November. Their conclusion: Greece has "seriously neglected" its duty to control its outer borders.

The list of shortcomings, the report claims, is long: The registration of the refugees isn't working, because there aren't devices for taking fingerprints and the Internet sometimes stops working; there aren't enough officials; there are too few boats to guard the coast; passports are not being compared with databases, including those of Interpol.

"The major culprit isn't Greece," Greek Minister of Immigration Policy Ioannis Mouzalas says. He admits that registration in the initial reception centers known as "hotspots" is going slowly, and that things are behind schedule. But he claims the EU report is exaggerated, and that, either way, it is now outdated. Additionally, he claims, the EU has only sent Greece 800 of the 1,800 requested Frontex officials, and financial help for the purchase of fingerprint readers only came the previous week. He argues that the delays are a "convenient excuse" for the EU.

Mouzalas is furious that Greece is being pilloried while the most important mechanism to solve the problem is not being implemented: the distribution quota. Last fall, European leaders agreed to redistribute 66,400 refugees from Greece. So far, nine countries have only offered up 305 spots. Only 157 people have been relocated, a mere 10 to Germany. "Instead of chastising Greece ..., it would be more productive to do something about those states that sabotage the relocation scheme," says Mouzalas.

Migration researcher Düvell also finds the EU's accusations "deeply unfair, cynical and shameful." He has conducted research himself in Greece and in Turkey -- and has come to the conclusion that it is impossible for Athens to stop migration to Europe, or even slow it down, on its own. "The EU member states are needed. They need to find a way to fairly distribute asylum-seekers across Europe," says Düvell. Brussel's criticism, he argues, is a "cheap trick," in order to "distract people from the failures of the EU states in the refugee crisis."

A confidential report by the German parliament administration from January 29 likewise suggests that the EU redistribution program is in danger of falling apart due to the lack in willingness by member states to take in refugees.

The criticism of Greece also seems unfair because international law makes it illegal to simply send refugees back to Turkey. In the past, the Greeks were reprimanded for pushing away boats with refugees and Alexis Tsipras' government has mostly stopped these "push-backs." Now it is being criticized for doing the opposite. The German government is aware of this dilemma: According to an internal report by the "hotspot" commissioner of the German government from December, Turkey is the "central player in the reduction" of the numbers of refugees. "The Greeks can only save the refugees, but not stop the smugglers."

For this reason, the Netherlands government has pushed for a plan in which refugees would be directly sent back from the Greek islands to Turkey on ferries. In return, the EU member states should then be willing to accept a contingent of 250,000 refugees every year from Turkey. But that is unrealistic as long as the Europe-wide distribution doesn't work.

And regardless, the suggestion is legally problematic for two reasons: For one, the EU Charter of Fundamental Rights stipulates that asylum applications must be individually evaluated. And although Greece just declared Turkey to be a "secure third country" to which refugees may be deported, mass returns are unlikely, Düvell believes.

He asks, "Why should Erdogan act as Europe's bouncer?" The memo by the European Commission therefore exists to justify the upcoming extension of the temporary border controls, like those that have been introduced in Germany and Austria. According to the Schengen Border Code, there needs to be a lack in supervision of the outer borders for the closure of the interior borders to be allowable. The ultimate goal is that of saving Schengen: An end to the free movement of goods and people would be especially damaging to Germany and the northern countries.

Mouzalas, the Greek Minister of Immigration Policy, also believes that Brussel's threats to kick his country out of the Schengen Zone amount to fear-mongering and, legally speaking, nonsense. Anyways: "Whatever happens with Schengen, the migrant flows will not be affected."

He is much more afraid that the countries on the Balkan route will close down their borders -- all the way to the north. For this reason, he is putting his faith in the most hated woman in his homeland: the German chancellor. "Angela Merkel is under pressure, so I fear that at some point the German border will close." And then he says something that is very unusual for a Greek. "Germany is right now the voice of reason in Europe."

In order to avoid giving the Europeans a reason to shut the borders, Tsipras has now decreed that, by mid-February, all five "hotspots" and two new reception centers shall be operational. In order for that to happen quickly, he has assigned the task to the army. One of the reception centers is to be built west of Thessaloniki, on Military Base 1090. A ghost town, with roofless barracks, covered in garbage and weeds, the only living things are a couple of growling, snarling guard dogs. In fewer than two weeks, 4,000 refugees are to be housed here.

The Delta municipality, in which the military base is located, is poor, there are drug dealers and criminals. "The government didn't even ask us in advance," complains Delta's mayor, Mimis Fotopoulos. "The people here aren't so concerned about the refugees themselves," he says. "They are concerned because they don't trust the government to enforce law and order. And they don't trust Europe, which seems to want to unload its problems onto Greece."

Only on one point are the citizens of Delta optimistic: They think it's completely unrealistic that the military base will be ready to house refugees in two weeks. 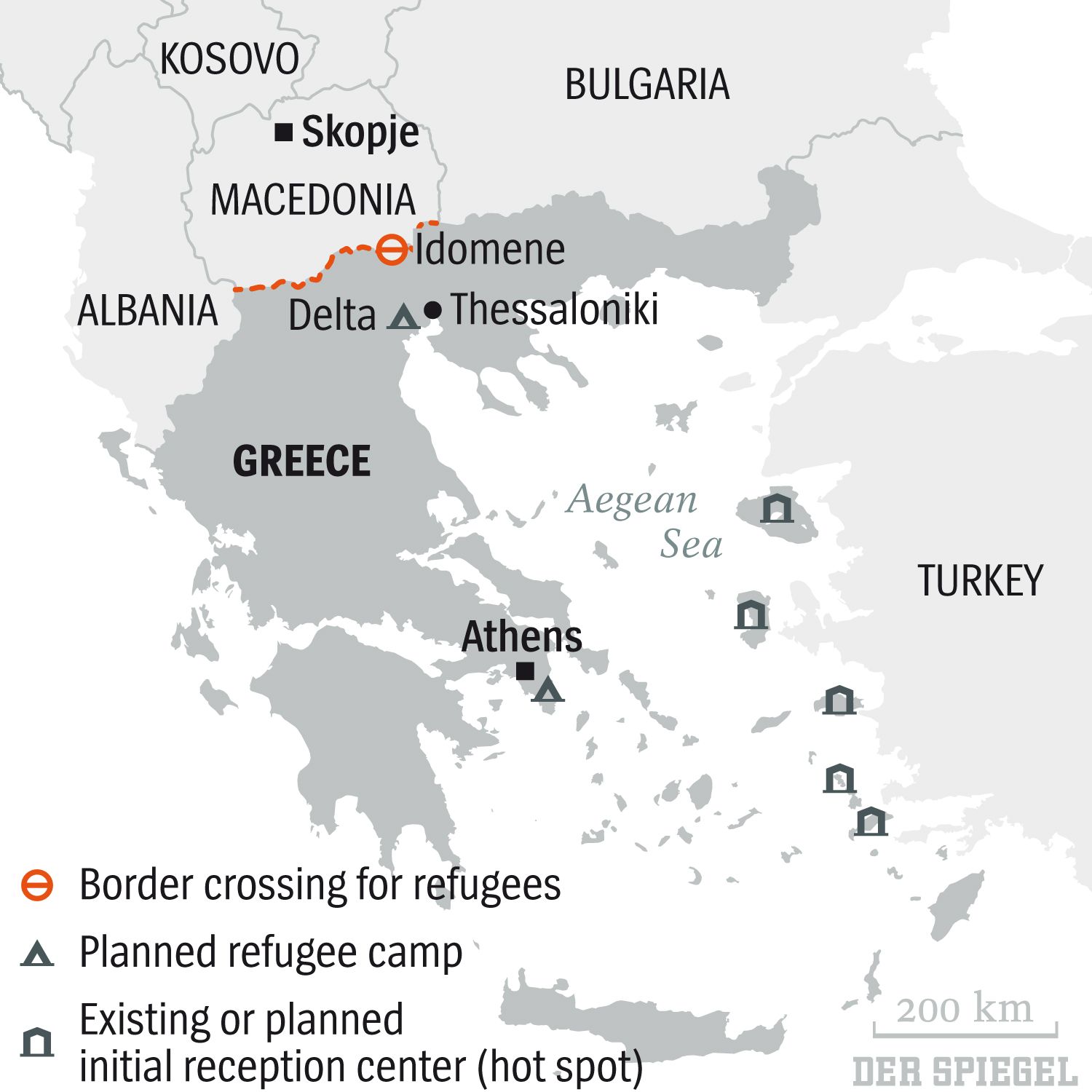