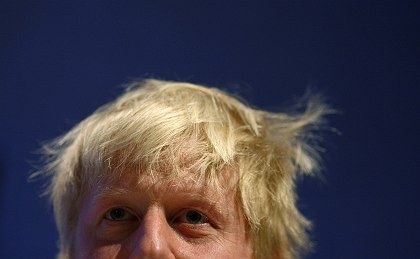 Boris Johnson: Nemesis of the mayor of London.

Hampstead Heath may be London's most spacious park. Poets Shelley and Keats came here to seek inspiration, Karl Marx brought his family here for Sunday picnics, and today Boris Johnson, 43, the conservative mayoral candidate and product of the British upper class, is here to prove that he can get his hands dirty.

It rained the night before, and his polished black shoes sink in the mud. The man, whose trademark for decades has been a bleach-blond head of unkempt, Beatle-like hair, is obviously in a good mood. He smiles as he chops down an ash tree and plants a few rosebushes. Just as he is about to bid the park farewell and head for his silver hybrid car, one of the park's gardeners says: "Very nice. Now you can rake."

Johnson spins around, as if he's been slapped. Planting roses and felling trees can pass as gentlemanly pursuits, but raking is apparently a chore of the lower classes.

But the gardener won't take no for an answer. Johnson, whose full name is Alexander Boris de Pfeffel Johnson, has to climb into a hollow and rake decaying leaves from a path. By this point he might as well forget about his flannel trousers. For once, it isn't the fault of Ken Livingstone, 62, London's mayor for the past eight years. But his ruined pair of flannel trousers is probably the only problem Johnson hasn't pinned on his opponent, "Red Ken," during the current mayoral election campaign.

Johnson has done his best to hold Livingstone responsible for every possible annoyance in Western Europe's largest and most expensive city. The list is long.

It ranges from homicide among teenagers, which claimed 26 victims last year and has already claimed 11 this year, to the new, extra-long articulated buses, which Johnson says should be banished "to an airport in Scandinavia." The list includes a shortage of affordable housing as well as the £25 ($49) daily toll the mayor wants to charge drivers of large SUVs, popularly known as "Chelsea tractors" (a reference to London's posh Chelsea neighborhood).

Then there are the bike paths. Johnson is known for riding his mountain bike to work, navigating his way between the city's trademark double-decker buses. He wants more bike paths, he says, pulling the rake through the wet soil. It all sounds relatively humdrum in the mouth of a candidate who once said during a campaign: "If you vote for the conservatives, your wife will get bigger breasts, and your chances of driving a BMW M3 will increase."

"This election isn't some TV show like 'Big Brother,'" Mayor Livingstone warned at the beginning of the campaign. But a good-natured mudslinging contest á la reality TV is just what the battle to become mayor of this world-class city has become. One one side we have Johnson, a man who's made a name for himself on TV with jokes and pranks. On the other side there's Livingstone, the former leftist rebel, who has managed the city with surprising success since he came into office in 2000 -- but has also become an unpopular authority figure.

Or: On one side we have Johnson, product of Eton and Oxford, whose great-grandfather, Ali Kemal, served as interior minister of the Ottoman Empire, and whose great-great-grandmother was a Circassian slave, bought out of bondage by her husband. On the other side there's Livingstone, son of a seaman and a circus artist, who has allowed neither Margaret Thatcher nor Tony Blair to destroy his idiosyncratic career, and who even has plans to invite all of London to a giant party on Trafalgar Square to celebrate the 50th anniversary of Cuban dictator Fidel Castro's rise to power.

British Prime Minister Gordon Brown will be anxiously watching the May 1 election. If conservatives capture the mayoral office for the first time in 27 years, it would likely accelerate Brown's plunge in popularity. How can his Labour Party retain voters in the hinterlands if it can't even keep them loyal in the multicultural capital? Kilburn High Street in London's Brent district is a place where the city's various cultures collide, live side-by-side and sometimes intersect. It's a place of Caribbean telephone cards, Indian hair extensions, Irish betting offices and many drunks, even as early as 11 a.m. As Ken Livingstone walks down the street with a police officer, a young Jamaican woman named Mara leans out of her hair salon and calls out: "Hello, Mayor, when can we give you some blond highlights?"

Livingstone gives a tired smile. "My hair is so thin, I'm afraid you won't get very far," he says.

Livingstone has come to this district to give a presentation called, "Police in the London of the 21st Century." But he's been short on luck. New York's conservative former Mayor Rudy Giuliani was a role model for everything his left-wing counterpart in London counterpart has achieved: Crime is down by 20 percent since 2004. The murder rate has declined by 28 percent. Thousands more police officers were hired. None of it seems to count for much, though -- voters are still afraid. A 14-year-old boy was stabbed to death the previous evening, only a few hundred meters from where Livingstone is standing.

"Whenever there's bloodshed, it makes top headlines," he says heatedly. Livingstone exudes bitterness. He's losing the support of the white middle class, which sees him as arrogant and difficult to control -- as a somewhat eccentric autocrat who considers his office a lifetime post.

He's not fond of questions. Some time ago he started appearing before London City Council at 10 a.m. with a glass of whiskey. He said he needed sips of it as an anaesthetic for his throat during long question-and-answer sessions. He answered criticism by referring to Winston Churchill's tippling habits. "As it didn't impair him in the destruction of the greatest evil facing humanity," he said, "it won't impede with my continuing to lead Londoners."

But the glass of whiskey isn't the only oddity in Livingstone's administration. His extremely well paid advisor on minority issues is another one. Lee Jasper awarded a £65,000 public grant to a certain married woman and her organization, according to the Times and other papers, before sending an e-mail that suggested he was on particularly good terms with her. "Darling, I want to whisk you away to a deserted island beach," read the message that led to Jasper's resignation, "honey-glaze you, (and) let you cook slowly before a torrid and passionate embrace."

So it hardly came as a surprise when the public learned -- mid-campaign -- that Livingstone had three more children than he'd previously acknowledged. He said he couldn't imagine anyone would find the revelations shocking, though, since they hadn't involved any indecent behavior with "children, animals or vegetables."

Perhaps Not the Ruin of London

Still, one thing that can't be said about the man who now wants to "clean up" London is that he has any talent for neatness.

In Boris Johnson's patrician background, "order" might be defined as a lack of imagination. So the firebrand politician can be expected to have a moderately unconventional career. He quit his first job as a management consultant after only one week. "Try as I might," he later said, "I could not look at an overhead projection of a growth/profit matrix and stay conscious."

His willingness to break taboos and take risks made Johnson a success on TV. He later published the conservative weekly Spectator, where he was involved in a tumultuous affair with a columnist. This temporarily cost him his seat in the Conservative shadow cabinet, but he returned in 2005 -- as the would-be higher education minister, of all things. He's known as a brilliant speaker and the author of cynical quips. Once he told a campaign audience in London that the Underground, with its crowds of strap-hanging passengers, was an "underarm-nuzzling hell."

Opinion polls suggest that Johnson's antics, combined with Londoners' weariness of Livingstone, may be enough for Johnson to. He's unlikely to ruin the city, where the mayor has unlimited authority only on matters of public transportation and the police.

But he could ruin his party. A Johnson win is both longed for and feared by the Tories -- because if the eternal scallywag doesn't change, his potentially chaotic time in office could jeopardize their chances in the next general election against Gordon Brown.

But "Mayor of London" is a title not even Johnson always seems to want. One story has it that when a staff member reminded him that on Aug. 24, he would have to appear in Beijing to accept the Olympic flag on behalf of London, the host of the 2012 Summer Olympics, Johnson flipped through his calendar.

"But I'm in Tuscany that week!" he said.