Famed German political sociologist Max Weber once argued that the two great drivers of revolutionary power were charisma and rationality. Charisma depends on enthusiasm, rationality on intellectualization. According to this blueprint, Emmanuel Macron would seemingly be the ideal revolutionary. He combines charisma and intellect like few others and believes in the need to change France, Europe and the world. The book about his campaign is called simply: "Révolution." Macron sees himself as a know-it-all in the best sense of the term, but precisely that is also his greatest weakness. Nowhere did Weber write that charisma and intellect magnify each other when combined. A glance at the trajectory of Macron's popularity in France might lead to the assumption that the two qualities cancel each other out. Can a charismatic leader be a know-it-all? Can a know-it-all have charisma?

Many French people now see Macron's election to the presidency as something of an accident. Emmanuel Macron had no party, little experience, and lots of luck. His political opponents destroyed each other. Indeed, polls show that far less than half of Macron's voters in spring 2017 voted for him out of conviction. The rest of his voters, though, indicated that the other candidates, Marine Le Pen first and foremost, were simply unelectable.

Luck is not a factor in Max Weber's discussion of charismatic rulers. Macron, who suddenly became head of state at the age of 39, first needed to develop his authority. And he did so with a clear strategy, setting out doing so with single-minded determination, seeking to develop charisma through images and symbols, and to carry out his revolution through shrewd argumentation. He put himself at the epicenter of French politics. As a candidate, he was alone. And he remained so as president. But this over-personalization had its price. Macron's system relied on the complete centralization of power in the hands of the president and of a few intellectually gifted advisors, who sometimes send out text messages at 3 a.m., as Macron does himself. Macron's IQ-absolutism was successful in his first year. The furthest-reaching job-market reforms in recent French history, which he instituted in fall of 2017, didn't even lead to a general strike, as had been feared. Macron loosened the rules for firing employees and broke up the rigid wage-negotiation system. He simultaneously lowered the budget deficit below the 3-percent mark for the first time since 2007. He even modernized the sacrosanct French secondary-school diploma, known as the baccalauréat. Emmanuel Macron has already reformed his country more profoundly than all the presidents before him -- at least since Mitterrand, who implemented an important wave of modernization starting in 1983.

Macron is proud of his reforms. Rightly so. He believes these reforms will bring growth back to France. Rightly so. He also believes that new growth in France will repair the social imbalances in the country. Rightly so. But Macron is forgetting about the span of time required between reform, growth and social justice. Many French don't want to wait. They want results. Immediately. The yellow vests don't have a face, but they have charisma. And they are united in anger. They want a revolution and they want more net income. They don't care what this might mean economically for their highly indebted country. They loathe the self-proclaimed revolutionary at the top, his aloof reliance on symbols, his know-it-all revolutionary rationality. Although the Élysée's arguments are technocratically coherent, the gilets jaunes confront them with brutal simplicity: If you abolish the wealth tax but raise the price of diesel by six cents per liter, you are an enemy of the people.

One-and-a-half minutes into his address to the nation last Monday, Macron took a deep breath and addressed those whom he had forgotten: the single mothers, the job-seekers, the excluded. The mea culpa was followed by the checkbook, with Macron pledging to raise the minimum wage, introduce a tax exemption for overtime pay and lower social-welfare contributions for pensioners. It was a classic Macron moment -- empathy paired with technocracy, symbolism paired with facts, charisma paired with rationality. Can this approach work? Definitely. But only if Macron can win back his authority.

The hatred of the yellow vests will not disappear immediately. On the other hand, though, the movement has no leverage to derail the Macron system. The government has confronted the violence of the demonstrators with severity, but no political movement has yet emerged. Even if such a movement were born, it would have no influence. Macron is relatively secure in the Élysée until May 2022 and he enjoys absolute majority in parliament. He has no coalition partners to keep happy and no reason to fear a no-confidence vote.

A Need to Build Trust

Even if everything goes wrong, he can still use the same presidential sleight of hand each of his predecessors has used: fire the prime minister and call for a new start. Only very few constitutional systems provide the head of state with the luxury of an institutionalized scapegoat. Leaders with access to a political defense mechanism like that won't step down, even under the most severe political pressure.

The gilets jaunes know this. The question now is whether they will insist on pursuing their 1789-style overthrow attempt. Macron has made it clear that he is looking for political debate and that he accepts all forms of democratic resistance. But the gilets jaunes see themselves as a revolutionary force. And precisely that makes them dangerous to Macron, despite his institutional power. As such, Macron has to hope that his concessions to low-earners find acceptance and open a path to political dialogue. But Macron also needs to open up. Initially, he focused on establishing his authority. Now he must focus on creating trust and developing acceptance of his chosen path of modernization. Merely staying in office won't be enough for his reforms to continue. For Europe, this is especially important: A weak French president who entrenches himself inside the Élysée Palace won't help anyone. It is in Germany's interest to support Macron.

Macron's loss of authority at home can also be tied to his lack of support from the German government. Macron's visionary Sorbonne speech was answered by the German chancellor with a technocratic interview on Page Two of a national newspaper. In the negotiations over further integration of the common currency union, the German government skillfully dragged Macron's government so deeply into a technocratic debate over implementation that they spent several nights debating subjects like "single-limb collective action clauses," a specialized bond-condition variant. Thus far, Macron's attempt to jolt Europe awake has fizzled. Some officials in Berlin are pleased that the German government has taught the Sun King pragmatism. "He is strong with his vision, but we are strong in our implementation," it has recently been said in Berlin's government quarter.

But Europe is more than a game of Monopoly, and the German-French partnership is a long-term project. How will Berlin react if Macron doesn't prevail and an alliance of the far-right and far-left EU-haters surrounding Marine Le Pen and Jean-Luc Mélenchon takes power in 2022? Have we learned nothing from the Italian crisis?

Germany and Europe would now be well-advised to give Macron their support. If Macron fails, Europe fails. The French president's concessions to the gilets jaunes cost money. To start a debate now about deficit rules would be foolhardy. There is no better ammunition for Macron's opponents. We shouldn't forget that Germany didn't abide by the deficit criteria either when it instituted Agenda 2010, the package of welfare-system and labor-market reforms carried out between 2003 and 2005. From an economic standpoint, it is wise to accompany supply-side reforms with demand-side support, which is why the argument that a flexible approach to France should mean a flexible approach to Italy is irrelevant. In Italy, no serious reforms are being undertaken.

Berlin must have an interest in strengthening Macron, because Macron's quiet decline damages Germany. It would throw France back years economically if the revolutionary power in the country ceased being its president. It might be helpful to remember not just Max Weber, but also Abbé Sieyès, the great theoretician of the French Revolution. In 1799, he wrote: "Authority comes from above, trust from below." This formula still applies today -- to France, but also to Europe.

Henrik Enderlein is the president and professor of political economy at the Hertie School of Governance in Berlin as well as the director of the Jacques Delors Institute. 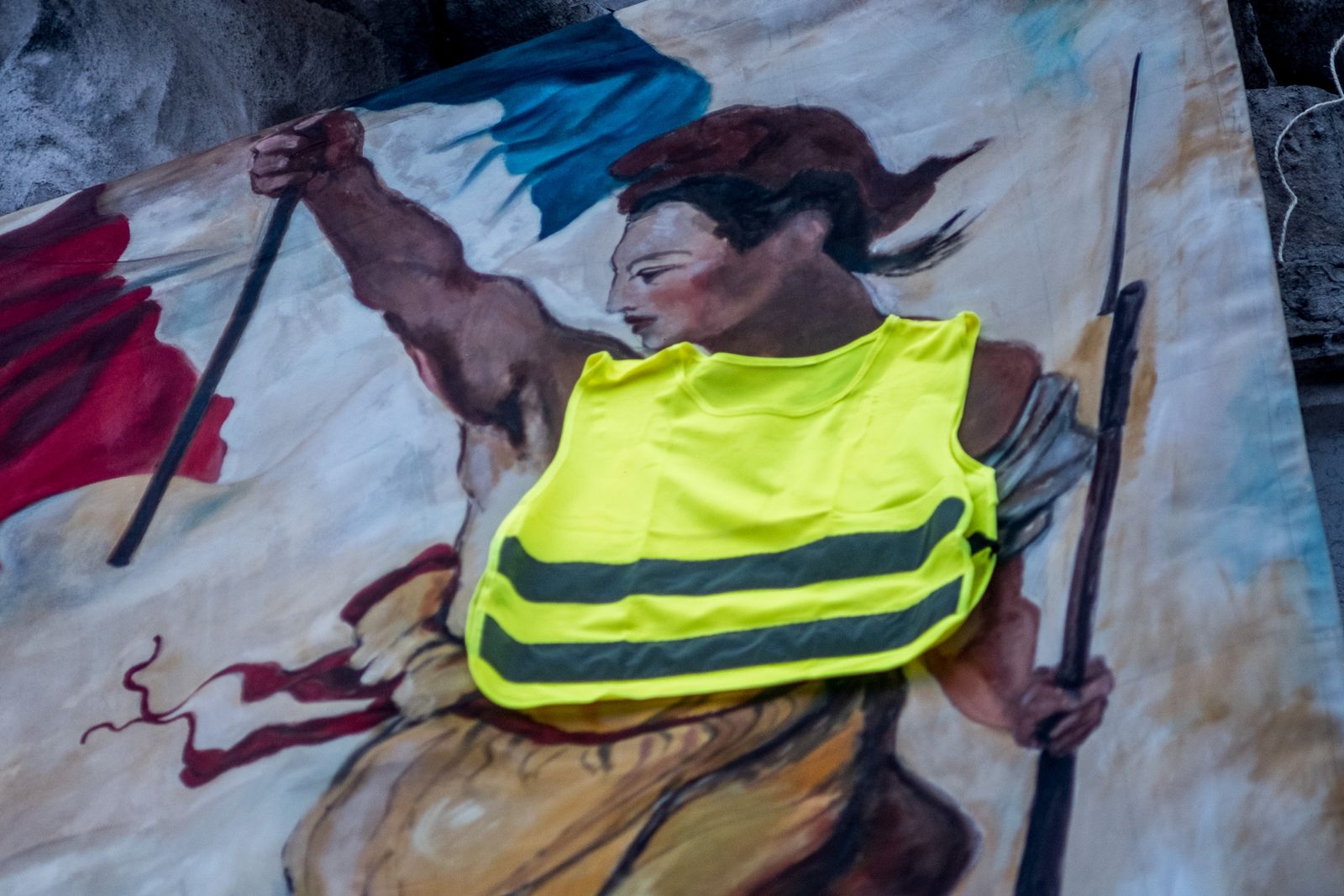