"Que se vayan todos," or "Away with all of them," became one of the slogans chanted by the tens of thousands of "Indignados" in Spain at protests last year. In addition to their eponymous outrage, many had one thing in common: Most were young and viewed themselves as victims of the crisis.

They might have been more specific and instead chanted: "All the old people must go!" This phrase would apply because, in many ways, the euro crisis is also a conflict between generations -- the flush baby boomers in their fifties and sixties are today living prosperously at the expense of young people.

Intergenerational equity -- measured among other things by levels of direct and hidden debts and pension entitlements -- is particularly low in Southern Europe. In a 2011 study of intergenerational equity in 31 countries by the Bertelsmann Foundation, Greece came in last place. Italy, Portugal and Spain didn't do much better, landing in 28th, 24th and 22nd place respectively. Currently, the unequal distribution of income and opportunities is particularly distinct:

Bankers and politicians aren't the only ones responsible for the crisis, either. Many from the older generations were accomplices in the faltering system. Almost every family in Greece had a member who profited from the bloated state apparatus as a civil servant. Baby boomers in Spain took on mortgages en masse, pushing their country into the debt crisis. And in Italy, politicians like Silvio Berlusconi were re-elected repeatedly because their tricks were apparently met with great sympathy -- pensioners have been among the former prime minister's most important constituencies.

So why aren't more young people getting outraged? There are signs that they may be starting to focus on the issue. In an article penned for the German daily Die Tageszeitung, Italian writer Leonardo Palmisano wrote that the debate over job protection in his home country was "less about class than about age." On the one side of the issue are the precariously employed young people, and on the other side the baby boomers with permanent contracts and secure pensions. The "C/S", or "Cinquanta/Sessantenni," people in their fifties and sixties, are the "protagonists of the Berlusconi regime," he writes, holding "an excess of power in their hands, without having the necessary skills to lead the country out of the crisis."

Of course, not all southern European seniors are little Berlusconis. Many older people are suffering under the impact of austerity measures too. Nevertheless, in order to get honest answers about the crisis, it is important to pose questions about the responsibility older generations bear for the downturn.

In some cases, countries mulled uncomfortable labor market reforms that would have scaled back the privileges of older people. And they considered increasing taxes for the rich and a tougher battle against tax evasion, which has long been viewed as a trivial offense. Both are measures that would impact older, wealthier people in particular.

But little happened, and another trend has emerged instead: After some initial self-criticism, conspiracy theories have begun spreading among southern Europeans. Whether the boogyman is Wall Street or Angela Merkel, they find someone else to blame for their misery. Berlusconi has become particularly bold once again, claiming that only he can solve the problems as he plans another political comeback.

So why aren't young southern Europeans rebelling more vehemently against this kind of sheer arrogance? The sad answer is that they would be biting the hand that feeds them. Lacking their own means in Italy, Spain, and Greece, young people -- particularly men -- are living with their parents well into their adulthoods. That, of course, makes it a lot more difficult to revolt.

Nevertheless, Germans should hesitate before taking an overly haughty view of the situation. The unsolved generational conflict in the south provides a foretaste of what could await Germany in the future, too. It was only a few years ago that the then "grand coalition," a government comprised of Chancellor Angela Merkel's conservative Christian Democratic Union and the center-left Social Democratic Party, pushed through a "pension guarantee" that prevents cuts to benefits for the elderly even if wages sink for young workers. Behind this decision was the fear there would be a backlash among outraged pensioners in the next election, but the additional costs will total some €18 billion ($22 billion), according to a study conducted by the Kiel Institute for the World Economy, a prominent German think tank.

Meanwhile, income distribution between generations in Germany threatens to soon become a "new social issue," warns a recent analysis in a journal published by the Munich-based Ifo economic institute. The disparity between what young and old people earn must shrink, it says. "Otherwise the conflict potential will increase."

This gap is growing outside the euro zone, too. In the United States, household assets for those over 65 have increased by some 42 percent since 1984, according to the Pew Research Center. But those younger than 35 own 68 percent less than their peers did during the mid-1980s.

In the United Kingdom -- where youth riots last year shocked the world -- conservative politician David Willets published a book called, "The Pinch: How the Baby Boomers Took Their Children's Future -- And How They Can Give it Back" in 2010. Willets writes that the next generation will have to work harder to pay off their debts, making future generations the real losers of the current financial crisis.

But just because someone writes about youth problems doesn't make him one of their allies. Willets named university tuition as one factor behind the disappearing wealth of young Brits. However, shortly after his book was published he became Minister of the State for Universities and Science in the Cameron administration and had no problem tripling university tuition. Willets, incidentally, is 56 years old.

Ultimately, young Europeans will have to assert their own interests. Maybe they should resurrect a slogan from the protest movement of the 1960s: "Trust no one over 30!" 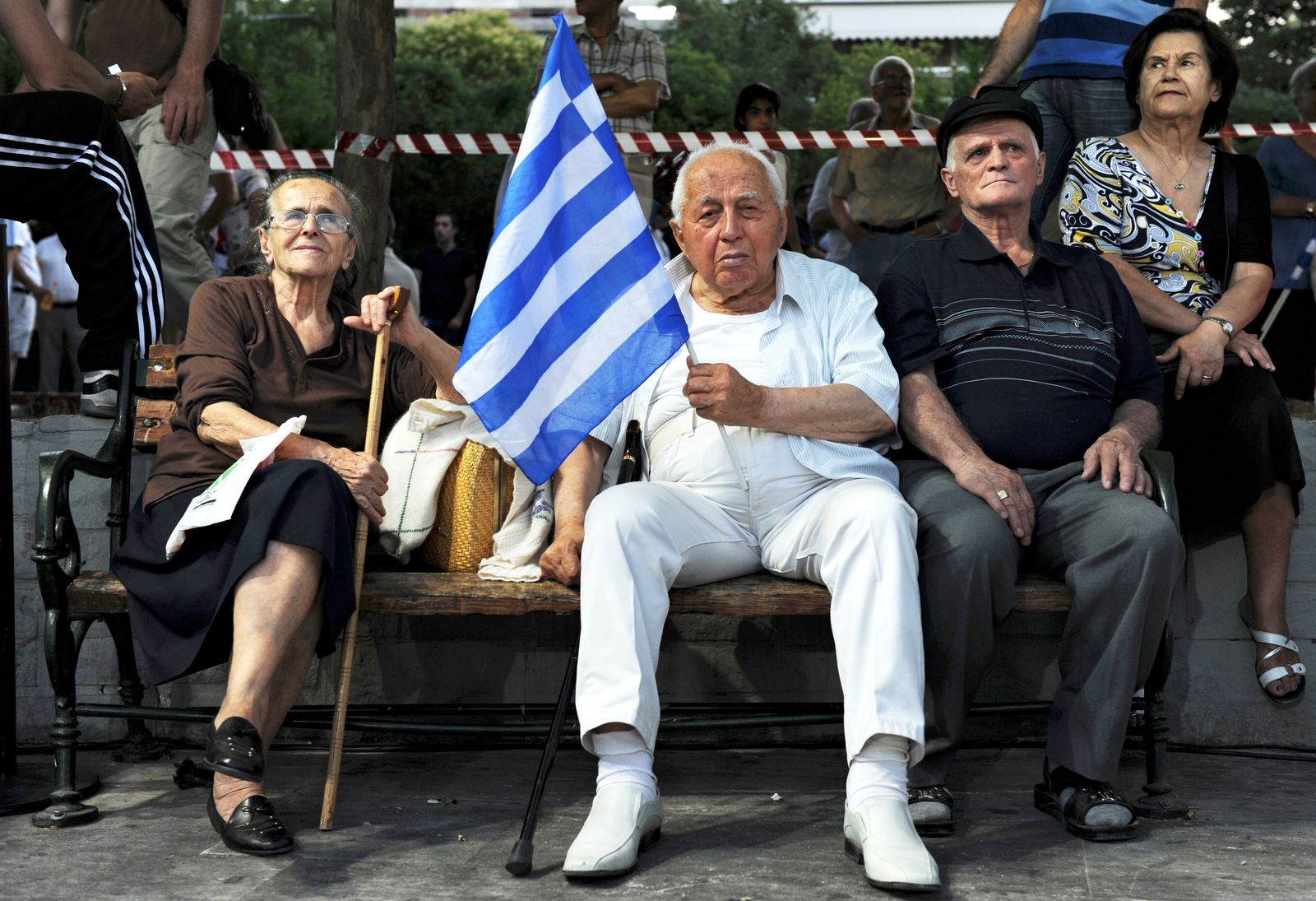 Elderly Greeks at a political rally: Are older people partly to blame for Europe's debt crisis?