Jean-Claude Juncker never lets others outshine him if he spots an opportunity to give the European project a boost. And that goes for friends and enemies alike.

Indeed, the European Commission president has now come up with a project that not only transgressions the mandate given him by the leaders of the European Union member states, but also pits him against all the Eurozone finance ministers as well.

Juncker was supposed to reach an agreement with finance ministers from the common currency area on proposals for deepening European integration he will present at the forthcoming EU summit later this month. Plans for greater EU integration are currently in vogue, a trend started by French President Emmanuel Macron, who presented his ideas for a better Europe two days after the German election in late September.

"The entire approach is a disaster," one participant complained. And because the national experts had no input, it's unlikely that EU heads of state and government will do more than simply take note of Juncker's proposals.

The timing is an expression of rivalry between the Commission and the EU member states when it comes to questions relating to theeconomic and currency union. And the finance ministers aren't likely to be impressed with the content, either. After all, the Commission's proposals are designed to increase its own influence at the expense of the member states.

Turning the ESM into an EU Institution

But there is more at stake than just a few bruised Brussels egos. The clash over competencies between European institutions risks torpedoing the French president's drive for reform.

For the first time in years, the French have seized the opportunity to once again set the tone in the EU. Yet, their call to arms is being met with hardly any response. Germany is preoccupied with forming a new government -- and nothing much happens in Brussels without Chancellor Angela Merkel. Juncker, though, does not want to stand accused of wasting the chance to implement reforms.

His central idea is to turn the EU bailout fund, the European Stability Mechanism, into an EU institution. Up to now, it has remained an intergovernmental body, controlled by the Eurozone countries. As such, it's the national finance ministers who have the final say, not the Economic and Monetary Affairs Commissioner Pierre Moscovici. They are the ones who decide if, when and to what extent a country that gets into financial difficulties should be helped.

By turning the bailout fund into an EU institution, Juncker hopes that the Commission will have access to the ESM's sizeable financial means. The ESM can extend loans worth a total of half a trillion euros. In order to ensure it maintains the highest possible credit rating, member states provide the fund with 700 billion euros in paid-in capital. Juncker, of course, would like to see that capital remain in the ESM, even as his plan calls for the countries that supplied the capital to lose some of their influence over how it is spent.

Turning the ESM into an EU institution should in theory necessitate treaty change, but the Commission has come up with a way around that requirement. Article 352 of the EU Treaty, a kind of emergency clause, allows the Commission to grant itself competencies it might need.

The chances of Juncker's proposal finding success are slim, for the simple reason that all member states must approve it. In Austria, the ESM is anchored in the constitution. And even Macron, the self-appointed EU reformer, is unenthused by the idea. France is the largest contributor to the ESM after Germany, yet according to Juncker's plan, Paris in the future would no longer have a say in how it is used.

There is, though, a rival idea to Juncker's and one that stands a much better chance. ESM head Klaus Regling, along with a handful of Eurozone finance ministers, want to expand the bailout fund into a kind of European Monetary Fund with broad powers for budget supervision and crisis management - an idea first proposed by former German Finance Minister Wolfgang Schäuble. The idea would be for the ESM to have a budget available to aid countries that are not officially in a bailout program but which need help to weather external shocks. One potential candidate, for example, could be Ireland, should its economy suffer drastically as a result of Brexit.

Juncker would also like to create a mechanism to deal with such cases, but with the Commission pulling the strings. He would like to see a so-called stabilization function in the EU budget with funding in the hundreds of billions of euros. It's not clear where that money might come from, but just as in the case of the ESM, the battle lines are drawn: Should it be the Commission or the member states who decide how the money is distributed?

Juncker, though, has yet another idea that could cost a lot of money. He would like to see countries that do carry out reforms be rewarded financially. And his package contains several more elements that might provoke ire, such as the proposal for a common deposit guarantee for EU banks. Germany has long opposed such a thing, and its joined by a number of other member states. These governments don't want to see their banks set aside capital only for it to be used to protect customers of foreign banks from the loss of their deposits.

Juncker is also seeking to avail of dozens of billions of euros in the ESM as a kind of nest egg for future bank bailouts. Experts describe this as a backstop, with the money being made available for bailing out struggling financial institutions that have not amassed enough of their own capital. Here, the Commission president is acting upon the wishes of the member states.

However, another of Juncker's plans is raising hackles. He wants to use a Eurozone-wide figure to determine whether the Stability Pact is being adhered to. That would mean that individual countries would no longer have to keep new borrowing below 3 percent of GDP, but the common currency are as a whole, which has long been the case.

The Commission denies that it wants to weaken the Stability and Growth Pact. According to information obtained by DER SPIEGEL, however, Monetary Affairs Commissioner Moscovici has long been pushing for a greater used of aggregate figures for the whole of the Eurozone.

This idea would essentially be a blank check for countries unwilling to keep a handle on their deficits. The more some countries met their own obligations and achieve surpluses, the more debt others would be able to accrue. "That would undermine the Stability Pact," warns Markus Ferber, financial expert with the Bavarian Christian Social Union. "The issue is not that the Eurozone is not keeping to its debt targets, but that individual countries are not." The European Commission is also proposing to no longer use the fiscal compact. Instead the focus should be on countries reducing their public debt.

Juncker's preference would be that the Economic and Monetary Affairs Commissioner would also take over the presidency of the Eurogroup. However, it's highly unlikely that the irritated finance ministers are going to allow an EU commissioner tell them what to do.

As such, critical voices are not just to be found in the member states' finance ministries. Guntram Wolff, head of Bruegel, the influential Brussels-based think tank, is also unimpressed by the proposal to merge the Economic and Monetary Affairs portfolio with the Eurogroup presidency.

That would "unduly mix the roles of the Commission and the Council," he wrote in a Bruegel policy brief. And Wolff has major issues with the reform plans. "Juncker's proposal would over-emphasize the Commission when fiscal policy making is national."

Yet, Schäuble's plans for the expansion of the ESM into a kind of European Monetary Fund with its own budget is also criticized in the brief, which was published last Friday. The former German finance minister "neglects the fact that national fiscal policy matters for the euro area," Wolff writes.

The article you are reading originally appeared in German in issue 49/2017 (December 2nd, 2017) of DER SPIEGEL.

Instead Wolff suggests developing the Eurogroup into a sort of European financial government. He envisions a permanent, full-time Eurogroup president reporting to European Parliament and representing the interests of the entire Eurozone. The Commission would continue to oversee the Eurozone member's fiscal policies, but the Eurogroup president would have the political weight to put pressure on countries to reform.

Member states that ended up in financial difficulties through no fault of their own and which were not eligible for ESM aid could be helped via a so-called stabilization instrument as part of the EU budget, but with far less funding than that envisaged by Juncker. A fund amounting to between 50 and 70 billion euros would enable "significant support" to be provided to countries affected by so-called asymmetric shocks. "It would be insurance to support specific countries," Wolff writes.

Meanwhile, the Eurogroup remains an informal group for now. On Monday, the 19 finance ministers gathered in Brussels to elect a new president to replace the outgoing Dutch Eurogroup head, Jeroen Dijsselbloem, who is giving up the post in January. Portugal's Mário Centeno was elected and in his acceptance speech, he said that he looked forward to working with his peers "to form a consensus" on the Eurozone's future.

The Portuguese finance minister now faces another election in the coming months: that for the chair of the board of governors of the ESM. 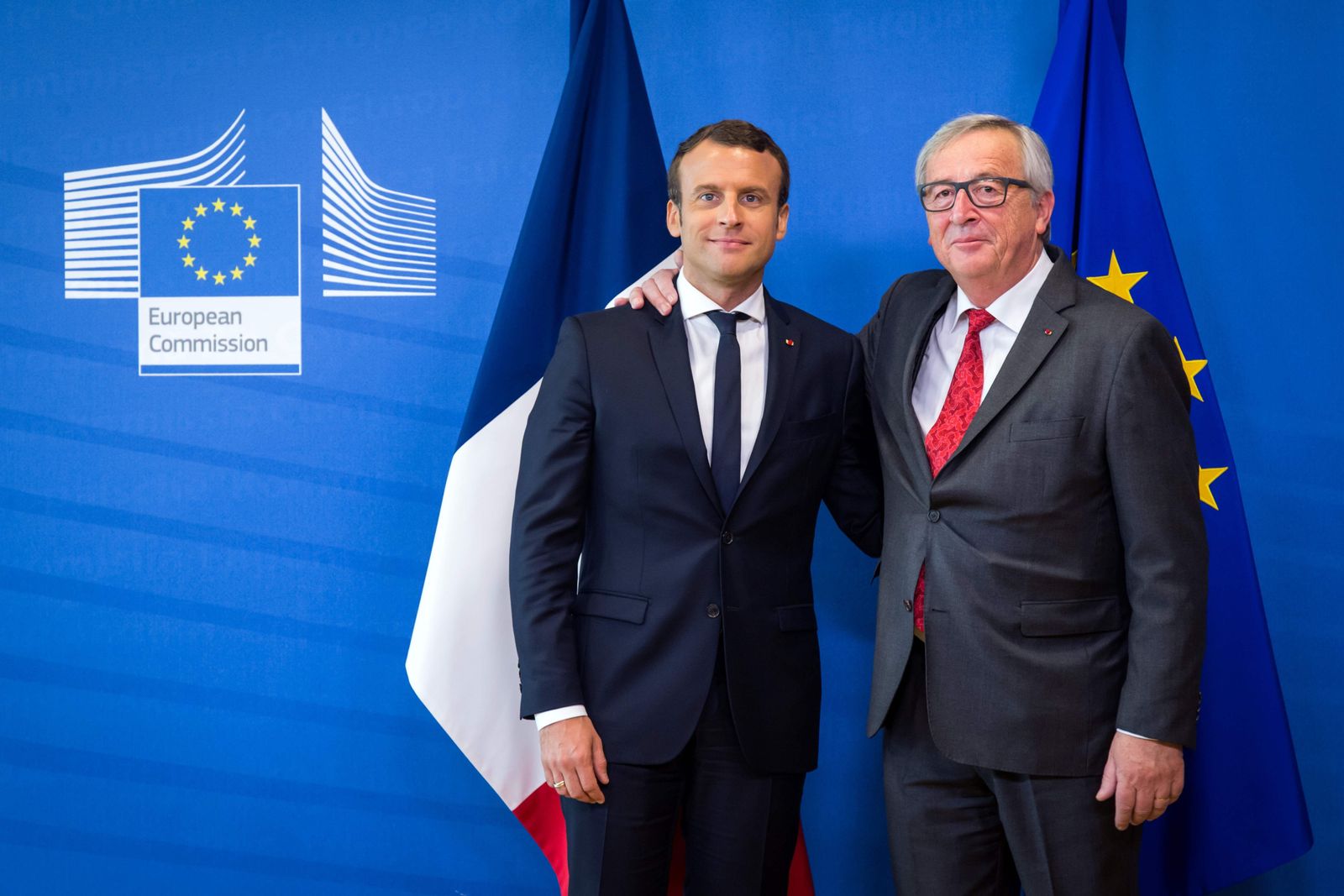