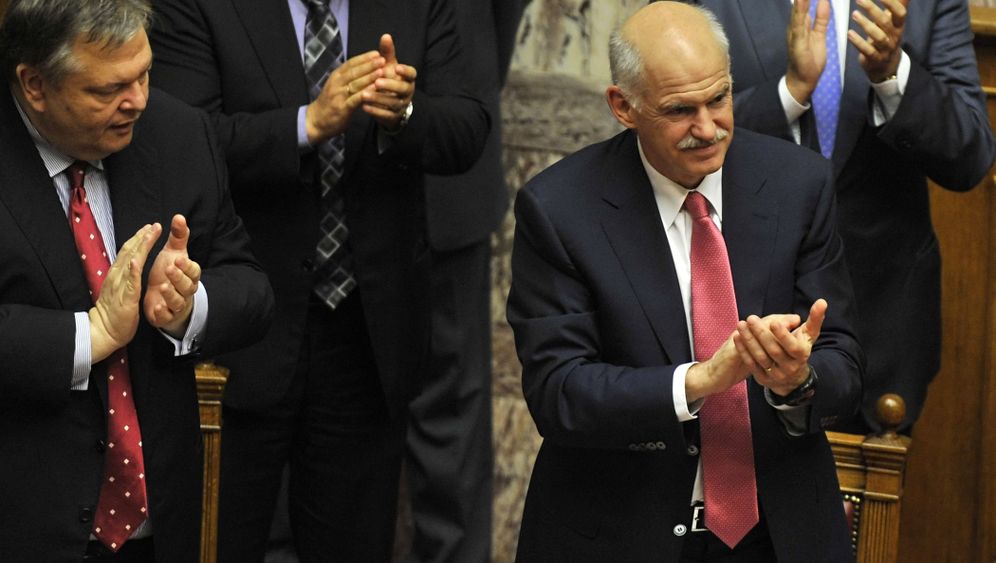 Photo Gallery: A Question of Confidence

When the vote was over, everything veered to the left. The laser pointers which had been criss-crossing the yellow façade of the Greek parliament were now directed at police in riot gear. The officers stood in the approach to the building, where Prime Minister Giorgios Papandreou had just withstood a vote of confidence. Now, he had to be protected from the anger of his people as he departed.

Papandreou, parliamentarians decided just past midnight on Tuesday night, can continue, despite a brief opposition walkout just prior to the vote and the resistance of a united opposition. But Papandreou's most important opponents, the scene out in front of the building made clear, were not seated on the opposition benches in parliament. They were out front, and there were thousands of them. They are furious with both Greece and the European Union as Athens struggles to survive the common currency crisis brought on by staggering public debt in Greece and elsewhere.

Thodoris, a 42-year-old actor from Athens who declined to provide his last name, was among them. Whistle in mouth, he said "I am here to protest against everything that is happening in my country." He was referring to the new austerity package which Papandreou, now that he has been confirmed in office, seeks to push through parliament next week. The belt-tightening measures, Thodoris said, are destroying the future of Greece, before he began blowing once again on his whistle.

Inside, parliamentarians could hear nothing of the tumult outside when the vote on Papandreou's future began at 12:24 a.m. local time. The president of the parliament called out the names of the representatives one at a time -- all 300 of them. Each responded with a "yes" or a "no".

The process was an orderly one, but came on the heels of a minor scandal -- one which only served to deepen the growing abyss between Papandreou's Panhellenic Socialist Movement (PASOK) and the opposition conservatives. In remarks before the vote, Vice President Theodoros Pangalos said that democracy in modern Greece did not begin in 1974, when the Greek military dictatorship came to an end. Rather, it began in 1981, when PASOK took over for the first time.

It was likely an attempt to unite PASOK -- which saw the beginnings of an internal party rebellion last week before it was forestalled by a cabinet reshuffle -- behind the prime minister. But opposition leader Antonis Samaras saw it as an attack and delegates from his conservative Nea Dimokratia (ND) party left the plenary hall for half an hour. The move came just days after negotiations aimed at forming a national unity government pairing PASOK with ND dissolved. And shortly after returning, Samaras said the comments by Pangalos buried the prospects of a partnership once and for all.

For now, Papandreou need not worry about the opposition, as long as his 155 delegates remain loyal. But the popular protests outside have become increasingly dangerous for the prime minister, and for all those who would support him.

The voice votes in parliament were announced one-by-one to the protesters outside. Each "yes" vote was greeted with thousands of boos. Dozens of laser pointers were aimed at the windows of the parliamentary building. In addition, the word "kleftes" -- thieves -- was projected onto the outside wall.

'I Think Society Will Explode'

Dimitris, who likewise refused to give his last name, was one of those wielding a pointer. "It is completely unfair that the money of the poor is used to save the banks," Dimitris, a 26-year-old engineering student, said. In the event the new austerity package is passed next week, he added, anything could happen. "I think that society will explode," he said.

The demonstrations ultimately remained largely peaceful, though police fired tear gas and stun grenades when a group of some 200 protesters began throwing bottles. There were other signs of anger as well. One poster read "Nazi - Nazi - Merkel - Sarkozy" with the stars of the European Union arranged to form a swastika. Another poster suggested throwing Germany out of the euro zone. A handful of demonstrators paraded a gallows in front of the police blockade.

Yet despite the risks of public fury, Papandreou has little choice. His country badly needs a €12 billion ($17.26 billion) tranche from the €110 billion bailout package assembled for Greece by the European Union and the International Monetary Fund (IMF) last spring. The European Union, however, has made the passage of additional austerity measures a condition for the payout of that tranche. The prime minister's hands are tied.

Many in Greece have begun criticizing Papandreou as being merely a lackey of foreign leaders. Furthermore, as the son of an American mother, he has been accused of being too close to the United States and the IMF. One poster on Tuesday evening included a photo of Papandreou beneath the IMF logo and the sentence: "Employee of the Year." Another read "Jefry Go Home! -- a reference to the fact that he was called Jeffrey as a child in the US.

The fact that acting-IMF head John Lipsky, of the US, and US Treasury Secretary Timothy Geithner both upped the pressure on Greece in recent days hasn't helped.

Still, Tuesday saw Europe move to defuse the growing crisis. European Commission President Jose Manuel Barroso pledged to accelerate the payout of billions of euros in European Union development funds once the austerity package is passed -- a proposal that has been under discussion for some time. The advantage is that the funds have already been budgeted. Payouts to Greece have been delayed, however, because Athens has been unable to come up with the requisite matching funds.

Furthermore, some are proposing that Greece move towards the creation of an economic stimulus package to boost the fading economy. Opposition leader Samaras has presented a plan and has the backing of several economists who have long warned that deep spending cuts threaten to delay economic recovery in the country. In an interview with the influential weekly Die Zeit, German Finance Minister Wolfgang Schäuble even proposed establishing Greece as a supplier of solar energy to Germany and the rest of Europe given that the sun shines there far longer each year than in the north.

Such proposals, though, won't be realized for some time -- time that Papandreou simply doesn't have. At 1:04 a.m., the results of the vote were announced, and the prime minister had survived. Just 10 minutes later, most parliamentarians were gone, having left out the side entrance yet still unable to avoid the laser pointer.

For Papandreou, the respite will be brief. The austerity package vote is scheduled for June 28.