Maria Loukos is sitting completely alone in a commuter train car staring forlornly out the window. Outside, the city passes by; it is a bright, warm early November day. But the 72 year old is unable to enjoy the ride.

She is on her way to see her daughter, a civil servant in Athens, Loukos explains with a halting voice. "We have huge worries, you know?" she says, mentioning the drastic pay cuts forced upon government employees in addition to new and higher taxes. Her family's financial security has vanished. "We are desperate!"

But what about the referendum that may be approaching? Greek Prime Minister Giorgios Papandreou announced on Monday that voters will soon be able to decide their fate themselves in a vote on the drastic belt-tightening measures imposed on the Greek populace in the effort to save the euro. Doesn't the referendum give her hope?

The small woman with the blue-tinted hair waves the question away. "How will a referendum help me when I don't understand anything anyway?" she asks. Everything is so complicated, she complains, media reports are contradictory and Greece's political parties are hopelessly at odds with one another. She simply no longer knows who to believe. "What is best for my daughter, for me, for Greece? What?"

Loukos is in good company in her confusion. Indeed, events on Thursday are likely to further confuse people like her. Papandreou announced that he was open to talks aimed at creating a transitional government together with the opposition. Should they reach agreement, there is a possibility that the referendum won't be held at all, Reuters reported on Tuesday, citing a source within the prime minister's office.

More Divided than Ever

That, it seems likely, would be just fine with many in Greece. While the prime minister has received support in some corners for his initiative in calling a national referendum over the bailout package and concurrent austerity measures, many Greek citizens are confused and unsettled. Indeed, a (non-representative) survey undertaken by the website of the left-leaning daily Te Nea found that half of Greeks don't want a referendum at all. Among the 50 percent which said they would vote in such a referendum, half say they are for the austerity measures and the other half against. Greece, it would appear, is more divided than ever.

Contributing to that division is the fact that Greece's opposition has been steadfastly opposed to Papandreou's course. The conservative Nea Dimokratia party rejects the idea of a referendum and is demanding new elections.

"The government is confused and has to go," says party head Antonis Samaras. He said he would put a stop to the "risky experiment ... no matter the cost." The Communists have likewise proven to be no fan of the kind of direct democracy proposed by Papandreou. They say the referendum is akin to blackmail and will almost certainly, says party head Aleka Papariga, contain manipulative questions.

"There is no tradition of referendums in Greece," says influential political analyst George Papachristos. In recent decades, the Greek population has only been asked to vote in a referendum once, he says, in 1974 when the monarchy was eliminated. Confronting Greeks now with a question of such existential importance, Papachristos says, would be asking too much of them.

"The majority of Greeks simply don't understand the complicated details," agrees Stelios Athiniotakis, a jeweller in Athens. Nikos Panagialas, a taxi driver, says: "The issues at hand are extremely complicated. How are we supposed to answer with a simple yes or no?"

'Brink of the Abyss'

Several Greek newspapers have accused Papandreou of gambling with Greece's future, even to the point of risking a state bankruptcy. "The Greek government has declared its own political insolvency," writes the left-leaning daily Eleftherotypia. "The land was already facing difficulties. Now, the referendum has pushed it to the very brink of the abyss."

In addition, it isn't even clear whether a referendum is constitutional. The Greek constitution does allow certain forms of direct democracy, but it forbids referendums concerning financial issues. Some in Athens have even speculated that Papandreou's proposal was little more than a political maneuver to pressure European Union leaders.

If that were indeed his intention, a Wednesday evening meeting in Cannes, France between Papandreou, German Chancellor Angela Merkel and French President Nicolas Sarkozy would seem to indicate that it backfired. They and other EU leaders made it clear that the next tranche of the Greek aid package -- a chunk of money worth €8 billion -- would not be paid out until after the referendum. Merkel and Sarkozy also clearly indicated that saving the euro was higher on the list of priorities than keeping Greece as a member of the currency union.

Just how the referendum might be worded, if it does indeed come to pass, remains unclear. Papandreou has indicated a desire to focus on the rescue package itself, as has government spokesman Angelos Tolkos. The package, after all, keeps Greece solvent, but forces Athens to undertake deep cost-cutting measures and other austerity steps. So far, the focus on austerity has resulted in a significant contraction of the Greek economy, much larger than expected.

But the Financial Times reported on Thursday that the referendum is likely to focus instead on the country's ongoing membership in the euro zone. The paper cites sources close to the Papandreou government as saying that constitutional lawyers recommended making the question broader.

Papandreou, for his part, apears to already have begun preparing for the end of his tenure. Greece's security cabinet under Papandreou's leadership released the country's top military leaders on Tuesday. In Greece, it is considered normal for outgoing governments to reshuffle the military brass and install their own people before leaving office. For Papandreou, that time may not be far away.

With reporting by Spyros Drakopoulos 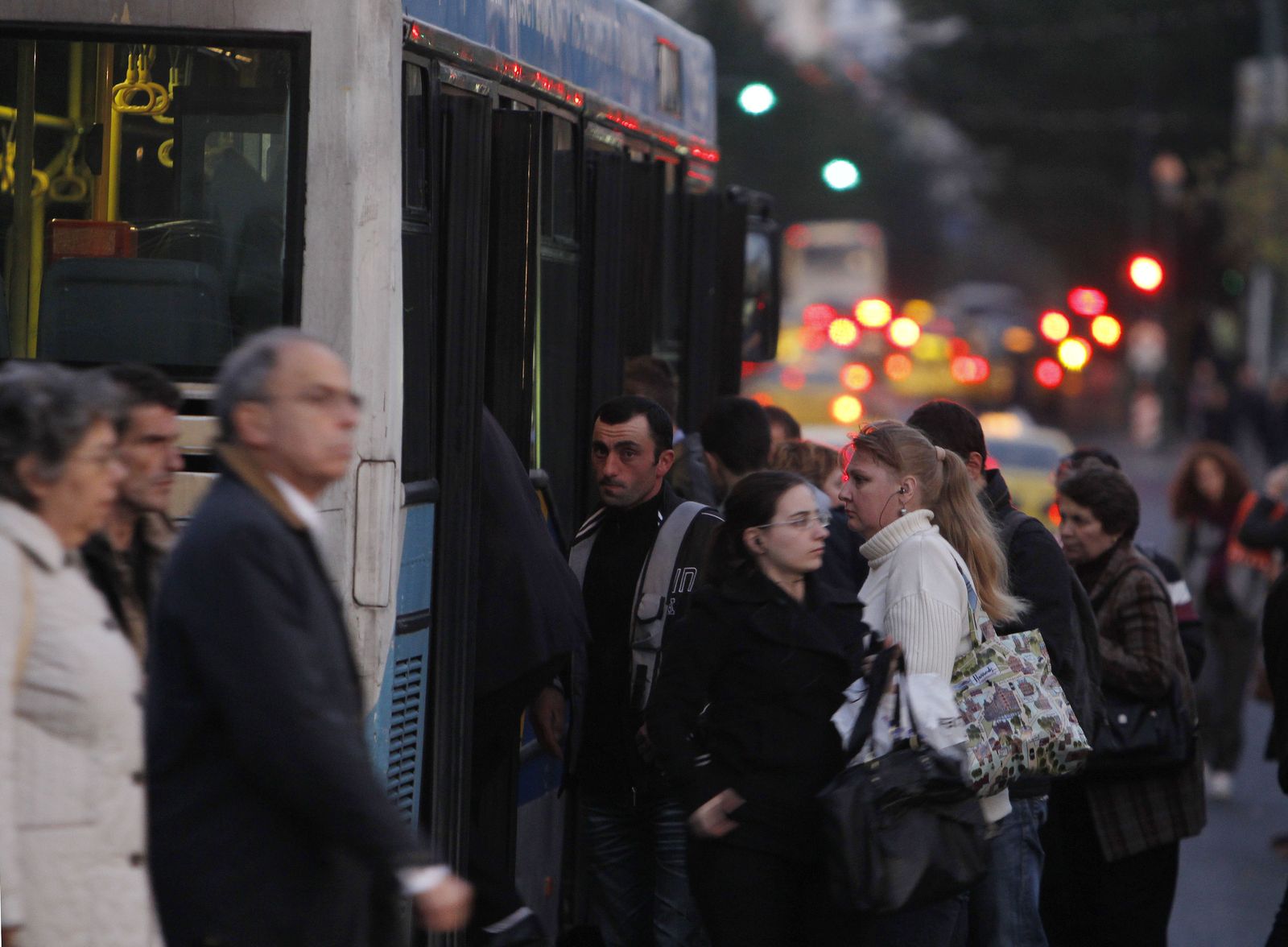 People waiting for the bus in Athens on Wednesday.