Assen Vassilev, the Bulgarian finance minister, is an excellent starting point should one be interested in learning whether his country is ready to join the eurozone. Vassilev receives his guests in a spacious conference room that has a rather interesting backstory. His predecessor is thought to have received bags full of cash in this room – allegedly in exchange for political favors.

A rather reserved man with a soft voice, Vassilev nevertheless paints an image of his country’s political class that is brutally forthright. Public sector contracts, he says, were handed out for years without tender. There were no effective controls and money laundering was a significant problem.

The Harvard-educated economist has been part of Bulgaria’s caretaker cabinet of experts since May and he is intent on cleaning up the corrupt mess left behind by the previous government. The former prime minister, Boyko Borissov, resigned this spring after a total of 10 years in power when his party, GERB, suffered heavy election losses.

After speaking to Vassilev for an hour, one begins to wonder if it is such a good idea for Bulgaria to join the common currency in the first place. In early June, Sofia presented a concrete plan for the introduction of the euro, with Jan. 1, 2024, identified as the day it will switch currencies.

And the chances of that plan becoming reality aren’t bad at all. Bulgaria fulfills all of the formal criteria for joining the European common currency zone. Its budget deficit, sovereign debt and inflation rate all exceed the criteria laid out for joining the euro. And the country’s currency, the leva, is already pegged to the euro.

Last year, Bulgaria joined Croatia in becoming part of the ERM II, Europe’s exchange rate mechanism, and the European banking union. And that means that the path to the euro is irreversible. Even the European Central Bank no longer has veto powers. Only the precise timing can be adjusted.

Bulgaria’s membership would mark the first expansion of the eurozone since Lithuania joined in 2015, becoming the common currency area’s 19th member. But does it really make sense to accept a country that has had lasting problems with corruption, money laundering and financial oversight?

"Of course, Bulgaria is more than welcome to join the euro, but it first must get a handle on its problems in the area of money laundering and corruption," says Sven Giegold, a Green Party member of European Parliament who traveled to Bulgaria together with party ally Daniel Freund to investigate the country’s readiness for the common currency. The EU, says Giegold, must prevent a situation in which a member state becomes a hub of large-scale money laundering, as has happened in the past in Cyprus or the Baltic states.

But could the EU block Bulgaria from joining? Once such an accession process starts, it tends to be difficult to stop. In summer 2020, even before the current caretaker government came into office, European Commission President Ursula von der Leyen insisted that "we will continue to stand with (Croatia and Bulgaria) as they take their next and final steps towards joining the euro area."

It seems as though the European Union could be in danger of creating yet another problem for itself – almost as if it learned nothing from the euro crisis.

Even leading politicians in the country believe that the Eurogroup should reexamine its intention of soon accepting Bulgaria into the common currency zone. "Bulgaria has a number of sectors where the combination of corruption, mismanagement and direct or indirect state control has led to accumulation of loses and factors of instability," says Christo Ivanov, head of the anti-corruption party Yes, Bulgaria! Ivanov and others are quick to recall the problems encountered by the eurozone following the accession of Greece.

At the time, Athens concealed its true sovereign debt levels and the size of its budget deficit. The country then almost went bankrupt in 2010, which magnified the severity of the euro crisis. Despite the Greek economy being extremely small relative to the entire eurozone, the country’s problems almost resulted in a collapse of the common currency zone.

"I'll Take Care of the Job"

European parliamentarian Freund, though, sees eurozone accession as an opportunity for the country. "Developments in Bulgaria are going in the right direction under the current government," he says. The European Commission and the European Central Bank, he says, need to use the opportunity presented by the introduction of the euro to get Bulgaria’s financial sector up to snuff.

That presupposes, however, that the reformers have political control. But the current government doesn’t have a majority in parliament. And new elections are scheduled for November, the third general election this year.

It is completely unclear whether Finance Minister Vassilev and his fellow cabinet members will be able to carry on their cleanup efforts. It is quite possible that Borissov’s GERB party – which belongs to the conservative European People’s Party group in the European Parliament alongside German Chancellor Angela Merkel’s Christian Democratic Union (CDU) – will return to power. And that would be a disaster for Europe. Borissov has already begun firing sarcastic barbs: "If you can’t handle it, bring me back. I’ll take care of the job for you."

The long-time head of government in Bulgaria single-mindedly eroded democracy in his country. He made inroads on judiciary independence and handed out public contracts to Bulgarian oligarchs. Because he was more discrete about it than the governments in Poland and Hungary, Borissov was largely able to avoid censure from Brussels or Berlin. His legacy will be with the country for a long time.

Many problems that Bulgaria faces cannot be quickly solved even if the motivation is there. One of the greatest hurdles, say civil rights activists and anti-corruption initiatives, is Prosecutor General Ivan Geshev. As long has he continues to block corruption investigations and protect both politicians and oligarchs, nothing will fundamentally change, says Adela Kachanova of the Bulgarian Helsinki Committee.

On the economic front, many things are going worse than the numbers might lead one to believe. The country did experience a decade of strong growth starting in 2000, but the economy has been significantly weaker ever since the global financial crisis. Studies from the European Commission and the European Central Bank don’t paint a particularly rosy picture for the future, either. There is, according to an ECB report, a "high level of uncertainty" regarding how the country’s inflation rate is going to evolve in the coming months, along with concerns about a "sharp worsening" of Bulgaria’s financial situation.

In the capital of Sofia, a small, yet highly productive software industry is developing, but otherwise, tourism plays an outsized role in the economy, as is the case for many structurally weak states in Southern Europe. The Organization for Economic Cooperation and Development (OECD) wrote it its most recent economic assessment from January of this year that "regulatory barriers to competition in Bulgaria are higher than for all OECD countries, with the exception of Colombia and Turkey." Bulgaria’s banking sector, meanwhile, has more bad loans than the OECD average.

More than anything, though, Bulgaria is suffering from a mass exodus of well-educated workers. Meanwhile, many of the young men and women who have remained in the country have neither a job nor adequate training.

The introduction of the euro could magnify the problem, say many economists. That, after all, is what happened in other countries that joined the common currency union. Once the old currency was gone, prices rose in many areas, which proved harmful primarily to the lower classes. To make up for the added burden, governments often jacked up welfare payments.

In response to such concerns, resistance is growing in the European Parliament. "I am in favor of a longer waiting period," says Markus Feber, an MEP with the Christian Social Union, the Bavarian sister party to the CDU. "Otherwise, Bulgaria could quickly turn into another Greece.”

Hans-Werner Sinn, the former head of the Ifo Institute for Economic Research in Munich, is even more critical. "Bulgaria saw in Greece how great it is when you are allowed to print a currency that other countries recognize as legal tender," he says. This privilege, he predicts, will also "trigger an inflationary boom" in Bulgaria, "which will ultimately rob it of its competitiveness and transform it into another recipient of the European transfer union."

The question is how such a development can be prevented. One way was demonstrated recently by the government of the United States. In June, Washington imposed sanctions on three Bulgarian oligarchs and 64 companies in accordance with the Magnitsky Act. The act allows the U.S. government to freeze the assets of large-scale criminals and prevent them from traveling to the U.S. The consequences are often painful, making the Magnitsky Act an effective instrument for fighting corruption. The new Bulgarian government welcomed Washington's move.

Reformers do not expect the EU to take a similar approach. When he asks the Americans for help in the battle against corruption, says Finance Minister Vassilev, it arrives within two days. Europe, meanwhile, merely writes vacuous reports and sits on its hands, he adds. He says he also hasn’t received any support from Germany. "The fact that the Bulgarian government has to ask the Americans for help is not a good sign for the EU," says Green Party MEP Freund.

At a dinner with reform-minded European parliamentarians, one of the lawmakers said that Bulgaria made serious efforts at reform as it was preparing to join the EU. But after accession, the reform effort immediately abated. That, many are concerned, could also happen once the country becomes part of the eurozone. 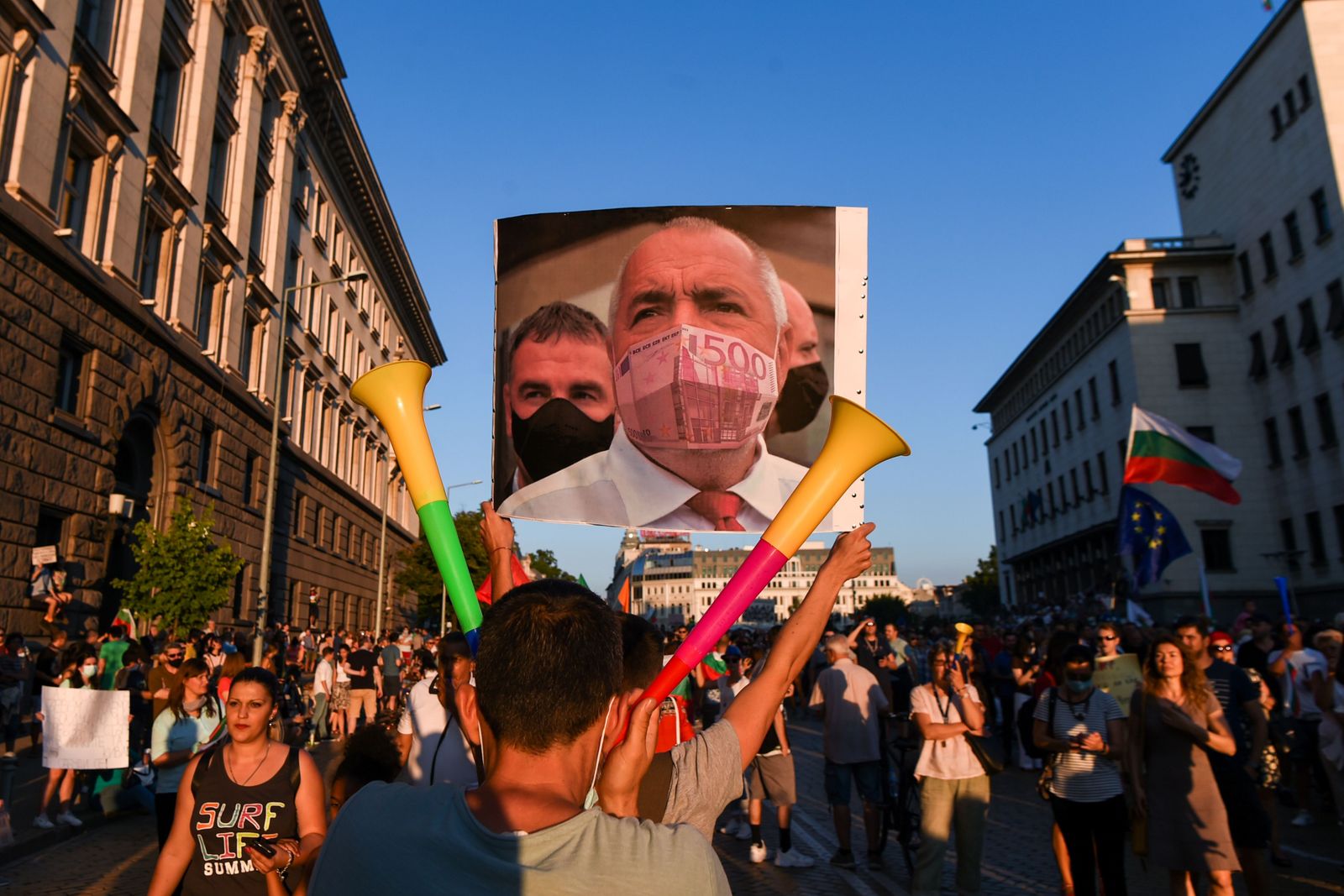 Anti-government rally in Sofia in summer 2020, with a photomontage of then-Prime Minister Boyko Borissov. He has been accused of deep-seated corruption.