In his North London office, Richard Ferrer doesn't shy away from the enemy. In fact, he has a picture of him on the wall, complete with the headline: "Not Good Enough." The image is of Jeremy Corbyn, head of the British Labour Party, looking innocently into the camera. "There he is," says Ferrer during an interview last Wednesday. "May God bless him."

Richard Ferrer, 47, is the editor-in-chief of Jewish News, a periodical with a circulation of 25,000. Outside of London, hardly anybody had heard of the free weekly until recently, but that quickly changed at the end of July. Together with two other Jewish newspapers, the Jewish News published an unprecedented warning on its front page, an op-ed that claimed that Corbyn represents an "existential threat" to the Jewish community in Britain. The sentence came from Ferrer's pen. "It was necessary," he says.

The accusation was the most recent culmination of a debate that has been raging on and off in Britain for the last three years. It is focused on the question as to whether Labour -- with its 600,000 members, the largest political party in the European Union -- has become increasingly tolerant of anti-Semitism among its followers. It is a debate that can seem like a campaign at times, but it is one that Corbyn's own amateurism has repeatedly fed. And last week, it got even worse, with pictures emerging of Corbyn at the grave of a top Palestinian terrorist.

Long a human rights activist, Corbyn's political career has been characterized by a consistent stance against racism and intolerance. But he nevertheless initially underestimated the problem created by last week's photos -- and then responded with a mixture of oversensitivity and half-truths, to the point that he even managed to divide his own circle of supporters. Indeed, the current crisis has been enough to raise questions about his fitness for the office of prime minister, a position which has long been seen as a realistic possibility given the chaos characterizing the current government of Conservative Prime Minister Theresa May.

Still, even Corbyn's opponents agree that the Labour leader is a man of great personal integrity. Ferrer himself says: "He isn't an anti-Semite, but a friend to anti-Semites."

Until 2015, it seemed out of the question that Labour could have a problem with anti-Semitism. That year, then-Labour head Ed Miliband was in the running to become the first Jewish prime minister in Britain since Benjamin Disraeli. But Miliband lost badly in that year's parliamentary elections and in the party leadership debate that followed, Corbyn emerged as an unlikely victor. Until his triumph, Corbyn had been little more than a back-bencher - a dyed-in-the-wool socialist and an adamant opponent of the opportunistic centrist course that Tony Blair charted for the Labour Party beginning in 1997.

Beyond the Limits of Decency

Ever since he was first elected to the House of Commons in 1983, Corbyn has consistently fought for peace, against the redistribution of money from the poor to the rich and in favor of oppressed minorities around the world, whether it be in Nicaragua, Sri Lanka or the Palestinian territories. He has long been an upright leftist in a party that was drifting to the right.

Following years of neo-liberal austerity, Corbyn's election as Labour Party leader was particularly welcomed by younger British voters. Within just a few months, the party gained several thousand new members, including many do-gooders and reawakened socialists, but also ultra-leftist dogmatists who are only concerned about human rights violations if they are committed by the right. Even then, though, it was apparent that many of the party's new members went far beyond the limits of decency in their criticism of Israeli policy toward the Gaza Strip and the West Bank.

In spring 2016, the party suspended Naz Shah, a member of Corbyn's shadow cabinet, for disseminating a fictitious map promoting the relocation of Israel to the United States along with the comment "problem solved." A short time later, prominent Labour member Ken Livingstone posited the theory that Hitler had been a Zionist before going nuts. Livingstone, too, was suspended. Corbyn ordered a superficial, internal party investigation which ultimately arrived at the comforting conclusion that Labour "is not overrun by anti-Semitism." Problem solved.

For his part, Corbyn may have underestimated how many enemies he had -- not just within his own party, but also among the overwhelmingly conservative British press. Newspaper editors couldn't imagine a socialist moving into 10 Downing Street, so large-circulation papers began portraying Corbyn as a naive pacifist who maintained positive relations with blackballed groups like Hezbollah and the IRA. Ahead of parliamentary elections last year, yellow press rags like the Daily Mail and the Sun published long pieces claiming that Corbyn has links to terrorism. It didn't work: Labour ended up with 40 percent of the vote, the party's best result in years.

Prior to local elections this spring, accusations of anti-Semitism returned, and this time they weren't just levied at Corbyn's fellow party members, but at the leader himself. In 2012, a street mural in East London was removed because it showed hook-nosed capitalists playing Monopoly on the backs of the poor -- a clear anti-Semitic cliché. Corbyn initially defended the artist, but when asked about it this spring, he said he regretted not having looked "more closely at the image I was commenting on."

Since then, hardly a week has gone by without additional reports of incidents of anti-Semitism in the Labour Party. Corbyn has done little to stem the tide and has even made the problem worse at times. In July, for example, Labour leadership triggered anger when it opted not to adopt word-for-word the definition of anti-Semitism offered by the International Holocaust Remembrance Alliance into its party statutes. In contrast to the IHRA, a collection of governments and experts, Labour believes it is legitimate to describe the foundation of a Jewish state as a "racist endeavor."

A member of Britain's Jewish community holding a sign protesting perceived anti-Semitism within the Labour Party. The text is a play on the Labour slogan: "For the many not the few."

Defenders of this point of view believe developments in Israel prove their point. Recently, for example, the Israeli government passed a law declaring the country to be a "Jewish nation-state," essentially making Arab Israelis and Druse second-class citizens.

Corbyn argues that the discussion on Israel must be conducted freely. But he completely underestimated the fury such a position would trigger. Labour parliamentarian Margaret Hodge, who comes from the Jewish family Oppenheimer, blasted Corbyn in the House of Commons, accusing him of being a "fucking anti-Semite and a racist."

Only a short time later, the three Jewish newspapers published their warning about Corbyn. Jewish News Editor-in-Chief Ferrer believes the sharp tone they opted for is defensible. "Jews don't have to run for their lives," he says, but he adds that if Corbyn were to come to power, it would embolden even more anti-Semites to show their true face. "The temperature would slowly rise," Ferrer believes. Even now, he says, his paper has begun receiving mail from readers wondering if it might be time to start packing their bags.

And the accusations of anti-Semitism against Corbyn aren't likely to dry up any time soon. After all, after 40 years of a political career in which he has pursued the principle of speaking with all sides in the pursuit of peace, Corbyn has sat down with numerous violent anti-Semites.

Last week, British media outlets published photos taken during Corbyn's trip to Tunis in 2014. The Tunisian capital is where, in 1985, the Israeli air force attacked the headquarters of the Palestinian Liberation Organization (PLO), killing around 60 people. The attack was condemned worldwide, including by the United Nations. During his trip, Corbyn paid respects to the victims at the Hammam al-Shat cemetery.

But the images reveal that Corbyn was also in the proximity of the grave of Abu Iyad, the deputy head of the PLO and mastermind of the of the terror group known as the Black September Organization, responsible for the slaughter of 11 Israeli athletes at the 1972 Summer Olympics in Munich.

When confronted with the photos, Corbyn initially denied the accusations. Later he admitted that he had been present at, "but not involved" in, the wreath-laying ceremony. It seemed an odd PR strategy to pursue. He could, after all, have sought to defend the visit to Abu Iyad's grave: Like PLO head Arafat, Iyad ultimately began searching for a violence-free solution to the Palestinian-Israeli conflict. Indeed, Arafat even won the Nobel Peace Prize for his efforts. But Corbyn preferred to waffle and to react with annoyance to questions about the incident.

It is striking just how few leading center-left voices have rushed to Corbyn's defense. Left-leaning media outlets like the Guardian have warned that Labour must do much more to combat anti-Semitism while Corbyn's deputy Tom Watson demanded recently that the Labour Party adopt the IHRA definition of anti-Semitism word-for-word. Otherwise, he says, the party will "disappear into a vortex of eternal shame and embarrassment."

Corbyn, though, can't seem to find his way out of the corner into which he has painted himself. It sometimes seems as though he is offended that not everyone believes anymore what his party continues to insist: namely that the Labour leader "doesn't have an anti-Semitic bone in his body."

Earlier this month, Corbyn took the step writing an op-ed for the Guardian, in which he admitted that Labour has a "real problem" that will no longer be tolerated. "People who dish out anti-Semitic poison need to understand: You do not do it in my name. You are not my supporters and have no place in our movement," Corbyn wrote. He said he intends to rebuild trust between his party and the 300,000 Jews living in Britain.

But Corbyn will also have to come up with a strategy for winning back the trust of the rest of the country. After months of leading in the public opinion polls, Labour has once again slid behind the Tories, which is hard to do given the governing party's deep divides and turbulent government.

Indeed, it is a deep irony that a socialist has unwittingly become responsible for saving the Conservatives. 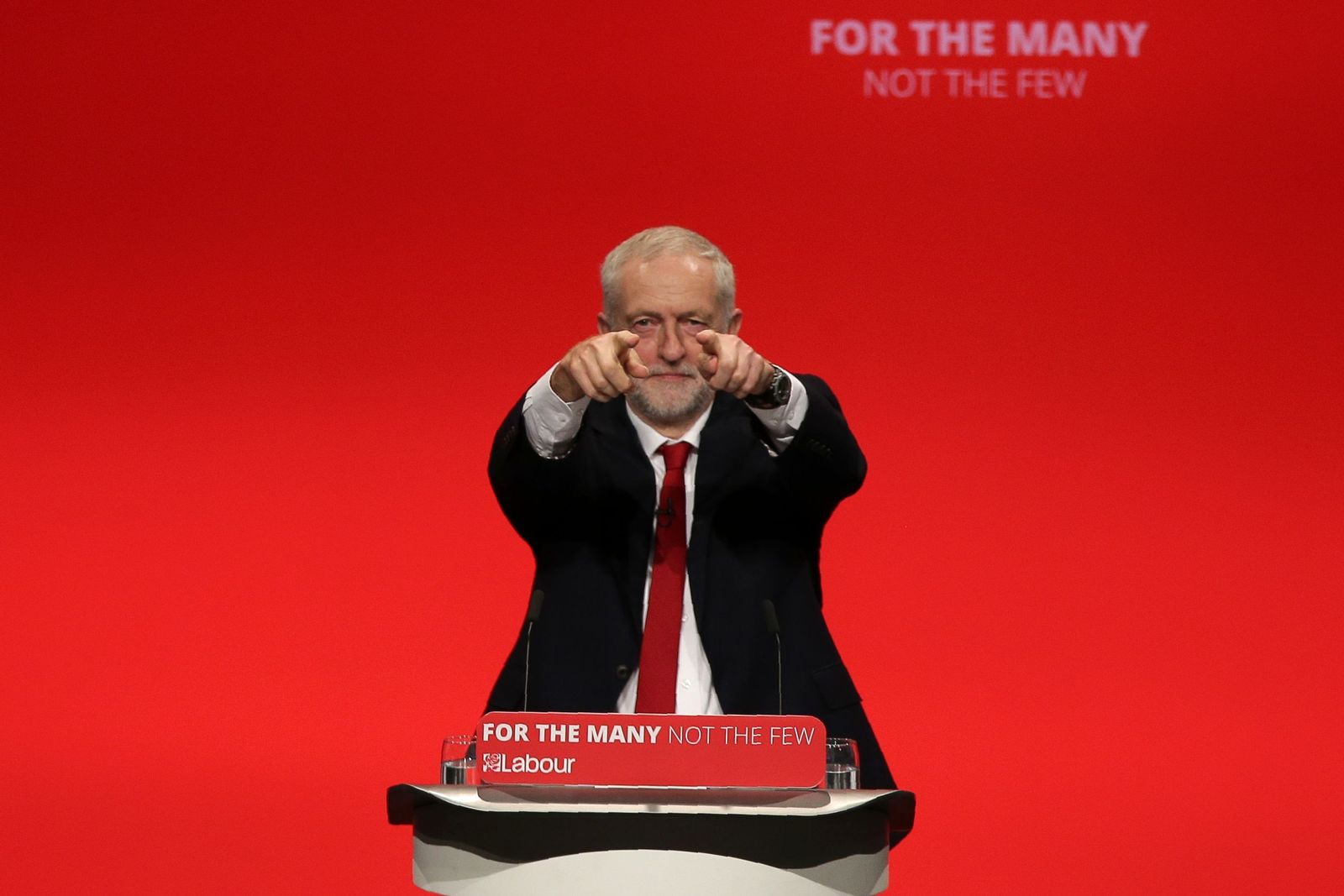 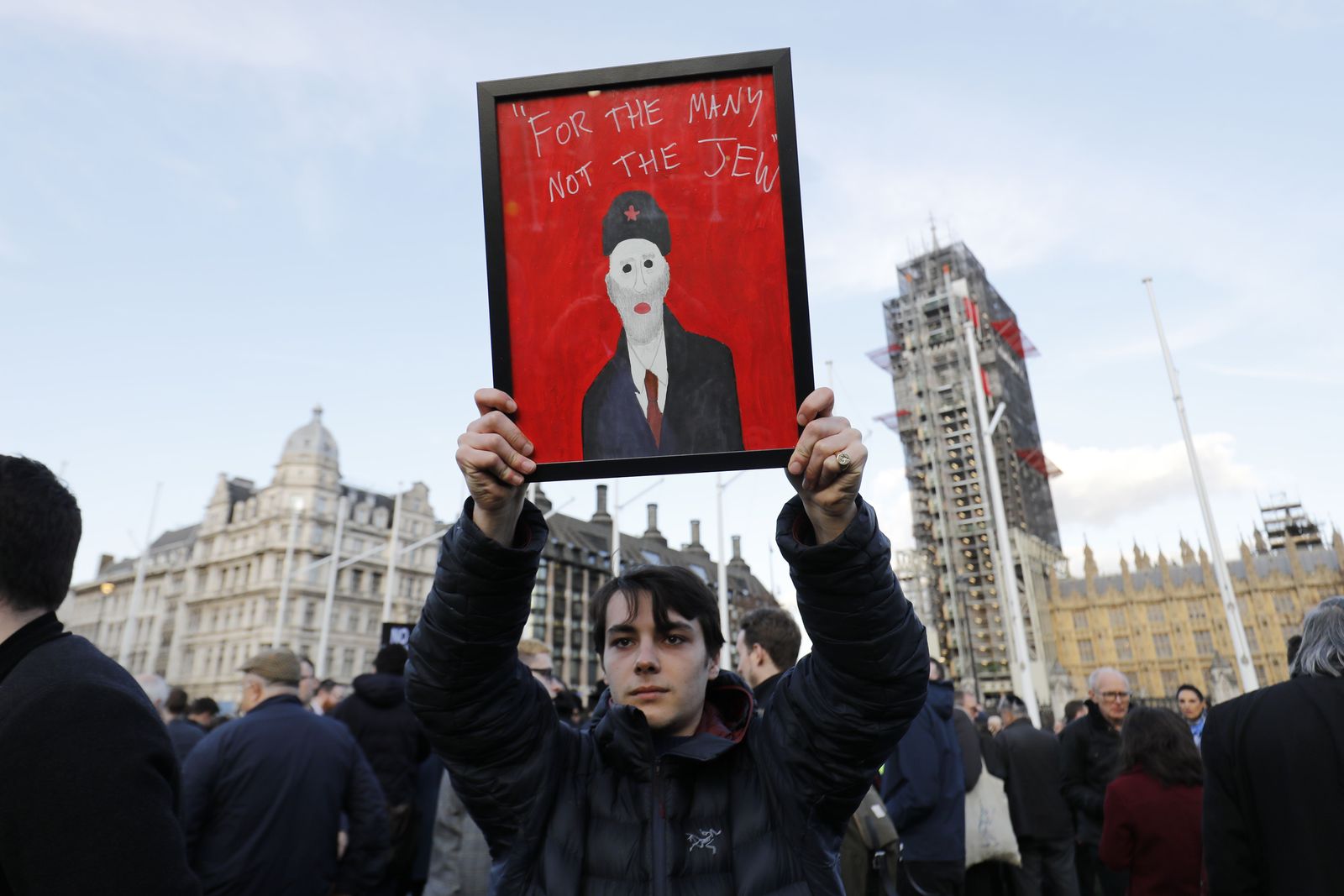 A member of Britain's Jewish community holding a sign protesting perceived anti-Semitism within the Labour Party. The text is a play on the Labour slogan: "For the many not the few."