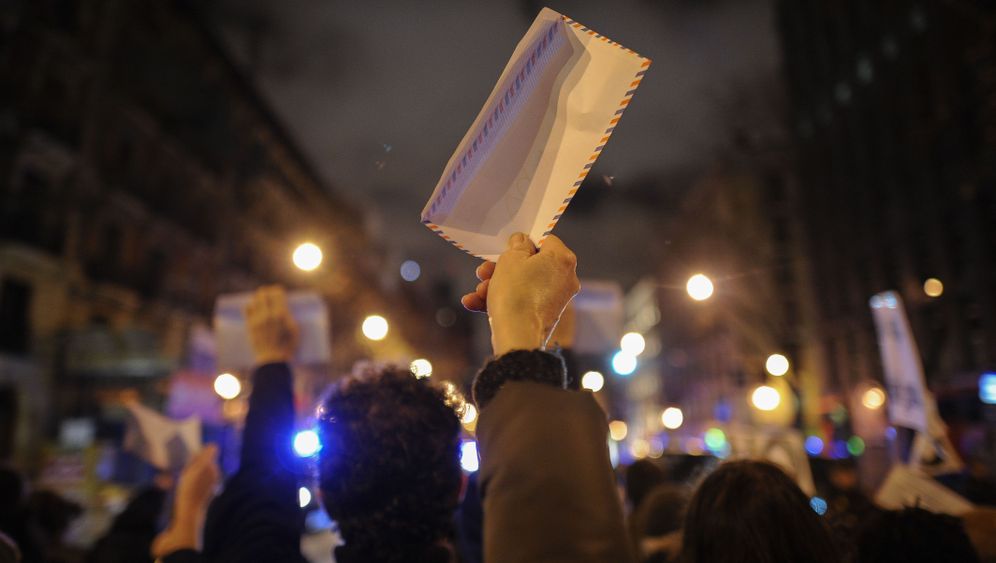 Photo Gallery: The Fight against Corruption in Spain

The powerful reacted the way powerful people react when they are in a tight spot. Former Prime Minister José María Aznar instructed his attorneys to sue the newspaper El País. Current Prime Minister Mariano Rajoy, a conservative like Aznar, threatened to sue anyone who leveled accusations at his People's Party (PP).

For weeks, Spanish newspapers have published new details about one of the country's biggest ever corruption scandals, called "Gürtel affair," named in German after businessman Francisco Correa, whose last name means "belt." For years Correa allegedly bribed PP officials with money and gifts in return for public contracts.

The general outline of the affair was known, but not the fact that the former treasurer of the People's Party, Luis Bárcenas, had amassed up to €22 million ($30 million) from dubious sources in accounts with Dresdner Bank in Geneva. The judge on the Spanish National Court only learned of this as a result of legal assistance from Switzerland. Even the conservative newspaper El Mundo could no longer refrain from delving into the scandal.

For as long as Bárcenas managed the PP's finances, El Mundo writes, the politician handed party officials envelopes filled with banknotes worth between €5,000 and 15,000 every month. A former member of parliament for the PP confirmed this practice. Although accepting additional pay is not prohibited if a person declares it on his tax return, the conservatives are nonetheless worried. Bárcenas may have recorded the source of the funds in his notebooks (anonymous donations to political parties have been banned since 2007), as well as to whom the money was passed and why.

Bárcenas accepted the equivalent of more than €1.3 million in bribes, a circumstance that businessman Correa bragged about in recorded conversations that led to the discovery of the scandal in 2009. Rajoy, head of the PP and leader of the opposition at the time, protected his treasurer at first, and the party paid an attorney. A year later, however, the conservatives forced Bárcenas to resign from his senate seat and to leave the People's Party.

A few days after Correa's arrest in 2009, Bárcenas began to move the money that had been parked in Switzerland, and by 2010 the Geneva accounts were empty. Thanks to a tax amnesty declared by the Rajoy government, he transferred close to €10 million back to Spain in recent months, said his lawyer. But that amnesty doesn't cover funds obtained illegally, stresses the finance minister.

Bárcenas denies all accusations. And if he is sent to prison, he has threatened that an "atom bomb" will explode.

PP Secretary General María Dolores de Cospedal denies any knowledge of envelopes stuffed with money, and she says that she never discussed such a practice with Rajoy. "The PP has nothing to do with the account, and this gentleman also has nothing to do with the party anymore." Rajoy, plagued with sovereign debt and a persistent budget deficit, ordered an internal and external audit. He also expects former party officials to sign a statement that they did not collect any illegal money. The prime minister plans to address the opposition's questions this week.

Sympathy for the Sweet Life

Alfredo Rubalcaba, leader of the Socialist Workers' Party, called for an anti-corruption pact at the very beginning of the year, but has so far found few takers despite the fact that more than 200 politicians face corruption charges in six of the 17 autonomous regions. In socialist Andalusia, six senior government officials face indictments in a fraud case involving early retirement funds. In Catalonia, officials are examining the business dealings undertaken by members of the long-time regional governmental head's family.

It is hardly a surprise that citizens no longer trust their politicians. In a poll, 95 percent of respondents said they were convinced that political parties in the country cover up corruption and bribery. Next to their concerns about unemployment and income, the Spaniards see politicians and nepotism as the country's biggest problem.

In the last elections, notoriously corrupt officials were reelected. But in the sixth year of the crisis, in which the conservative government is constantly calling for new sacrifices and higher taxes, and in which more and more people are losing their jobs, there is no longer any sympathy for the sweet life of the powerful. When the first reports of Señor Bárcenas' alleged special payments were discussed on the radio and on Twitter, hundreds of people marched to the party headquarters in Madrid and protested against politicians lining their pockets at taxpayer expense.

There were also new revelations within the last week over how the king's son-in-law, married to the Infanta Cristina, may have diverted money from a charity to his own accounts. He has once again been called to testify on the matter in February, although he denies the charges. The trial could become unpleasant for the king, because his daughter's private secretary is also allegedly embroiled in the matter.