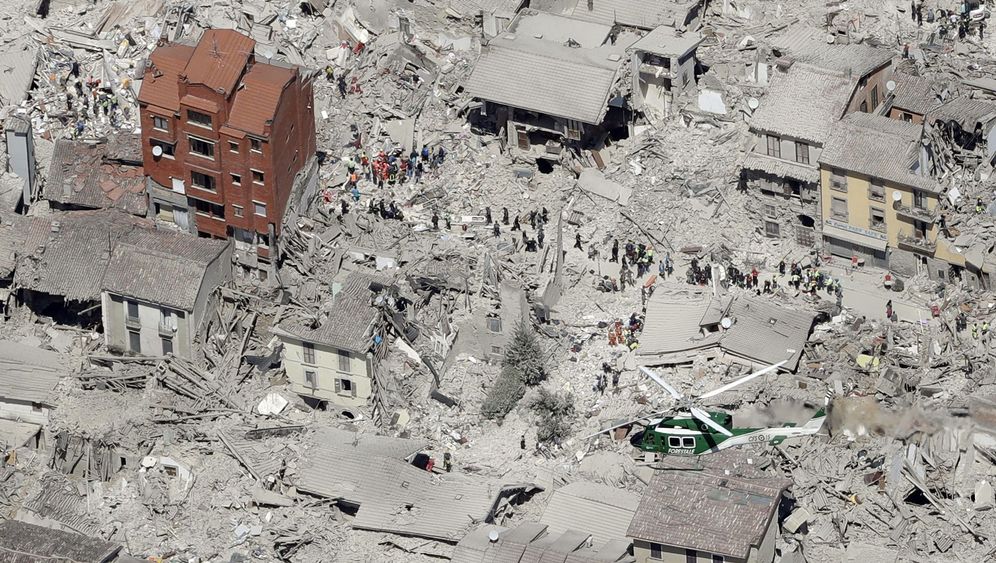 They look like the refugees that have been part of the evening news for years. The resemble the exhausted boat people that cross the sea in rubber rafts and land on Italian islands. But this isn't a war zone, and the sea is far away.

Andrea and Maria Giovanna Fontanella, he 71 and she in her late sixties, are standing in front of their home at the edge of Abruzzo Mountains and crying. Their bodies and their hair are still covered in dust, and they're wearing their last belongings. He has on a white polo shirt emblazoned with the word "Italia" in blue and she is wearing a green wool sweater for the cold nights.

They enter their three story home, painted green, for what will likely be the last time before it collapses and take whatever they can -- eggs from the tipped over refrigerator and a stick of salami that has fallen to the floor. They don't want to leave their belongings behind for plunderers. At night, they stare into the starry skies but are unable to sleep. Both say they have never experienced such a force, such finality.

Since Wednesday morning at 3:36 a.m., Andrea Fontanella and his wife Maria Giovanna have been refugees in their own country. The earthquake in Abruzzo, which measured 6.2 on the Richter scale, was the strongest experienced in Italy since 2009, when more than 300 people died in a tremblor in nearby L'Aquila. It robbed them of a future in these green hills and sparse mountains located about two and a half hours away from Rome by car.

"Right now, I am thinking a lot about the refugees from Africa and the Middle East," he says, "and I can often imagine how they feel -- out of place and a burden, but happy to be alive."

The Fontanellas come from Rocchetta, which means "little crags," a village located less than two kilometers from Amatrice, the town at the earthquake's epicenter. Rocchetta is nestled among the green mountaintops, between corn fields and sycamore trees. It's a pretty village, 30 homes, right in the middle of rural, deserted central Italy. Those who could, left long ago to Rome, Rieti and Terni, where there are jobs. Rocchetta was a village of elderly, but also of foreigners, economic migrants from Romania. Now, though, it has been wiped off the map by the earthquake.

"Just look," cries Andrea, a former member of the national police force who was stationed for years in Cyprus and has seen the world. "I knew Aleppo well and it looks like Aleppo here. Take a look, there's not a stone still in place. If you ask me, it can't be saved."

The church and the supermarket have caved in and several cars have been buried under the debris. The façade has broken off the building at the town fountain where purple geraniums are in bloom. The chandelier over the living room table is still turned on.

Six people died in Rocchetta during Wednesday's earthquake. The rest managed to escape the worst, but it is unlikely they will ever be able to live here again. Over 250 people were killed in the region, most in neighboring Amatrice. The town had been planning its most important festival of the year this weekend: the three day Sagra degli Spaghetti All'Amatriciana, a festival dedicated to the specialty named after the mountain town, spaghetti with pancetta and chili peppers.

On the night after the earthquake, the Bishop of Rienti arrived in Amatrice. Domenico Pompili, a quiet cleric wearing simple black clothing. He viewed the rubble of the town known as "Ciento Chiese," for its 100 churches, one of the prettiest places in Italy. He stood before the 15th century bell tower, where the arm on the clock is frozen at 3:38 a.m., the time of the earthquake.

Only days before, the bishop had been here to consecrate a church. Now he was listening, with bodies of children and seniors within sight, to stories of suffering. Stories like the baker who survived because he was standing in front of the oven when the earthquake struck. His wife and children were sleeping at home: They were pulled dead from the rubble.

It's no longer possible to navigate the streets in Amatrice's historic center. The only way to make one's way through the town -- past the police, fire department, mountain rescue and civil protection emergency vehicles with heavy rescue equipment that are backed up at the entries into the town -- to get an overview of the damage in Amatrice is by motorcycle. The wail of the sirens, the flashing blue of emergency lights, the clatter of rescue helicopters and the barking of search-and-rescue dogs creates an almost obscene contrast to the deadly silence that has crept over the area.

Will Failures of L'Aquila Be Repeated?

The bodies of the victims have been placed in blue plastic bags at the other side of town near the road leading to L'Aquila. The sign pointing to the capital of Abruzzo almost feels like a warning. To this day, the name L'Aquila is synonymous with the government's failures in responding to natural disasters.

Debris still remains from the devastating earthquake that struck L'Aquila on April 6, 2009. Corruption and squabbling among the authorities hindered the rebuilding of the city to the extent that the mayor famously quipped: "If the government wants this city to remain like Pompeii, then they should tell us." There has since been some movement in the city, but some parts of the regional capital still look as though the earthquake struck only recently, despite the billions that have flowed into reconstruction efforts. The awarding of contracts in L'Aquila were tainted by bribe payments, leading to the arrest of local politicians and suspected members of the mafia.

The seven-year long wrangling over the reconstruction effort there is reflective of the fundamental problems Italian Prime Minister Matteo Renzi has been trying to combat for two and a half years now -- corruption, bureaucracy and the close links between local politicians and organized crime. Renzi's government will now be judged on its response to the disaster in Amatrice and the other villages. "Amatrice will determine which face Italy is capable of showing," Renzi said on the day of the disaster. The Italian leader also praised helpers at the scene. "In the most difficult times, Italy shows its best face."

Italy Needs To Do More

The country's leading geoscientists, for their part, would like to see fewer moments in Italy in which the country must show its best face. On risk maps created by seismologists, central Italy has long been colored deep red. Strong earthquakes along the northwest-southeast fault lines of the Apennine mountain range have been a regular occurrence for hundreds of years.

Neither the devastating earthquake in L'Aquila in 2009 nor the one this week came anything close to the magnitude of previous tremblors, and yet they still could have been even more devastating had they occurred in more populous areas. "We geologists have been stressing for years that Italy is far from being a country with a culture of prevention," says Francesco Peduto, president of the Italy's National Council of Geologists.

Domenico Giardini, an Italian professor of seismology and geodynamics at ETH Zurich and director of the Seismic Risk Sector of the Italian High Risk Commission, concurs. "It unfortunately takes an earthquake in Italy before earthquake-proof buildings are constructed," he says. "Earthquakes cannot be prevented, but the total collapse of buildings is preventable."

Scientists, Giardini says, "cannot predict whether an earthquake will happen in one hour or one year, but they can predict with certainty that old buildings will collapse at a strength of 6 on the Richter scale." Why, then, was one of the first buildings to collapse a school that had been refitted with allegedly earthquake-proof reinforced concrete? There will be investigations, but will they yield any results?

The night the earthquake flattened the hamlet of Rocchetta, it startled Andrea Fontanella out of his sleep. He called out to his wife and they both kicked against the door until they were able to free themselves, barefoot and in their pajamas. The building across the street from them had been reduced to a pile of rubble. Andrea could hear whimpering and he heard his neighbor Piero calling for help.

He was trapped under a kitchen shelf and was having trouble breathing. Fontanella, the former police force member, called the federal police's local office in Amatrice and in Rieti at 4 a.m. and then again at 6 a.m., but no one came. He says he demanded to speak to the Comandante Generale, the most senior official. His former colleagues laughed at him, saying they had too much to do that night.

At sunrise, Andrea pulled an unconscious Piero out of the mountain of rubble himself, over there, Andrea says, pointing at the hole in the debris. Piero is now at a hospital in Rome and is doing better.

Rome is also where Andrea and his wife now want to go. They want to turn their backs on Rocchetta for good.