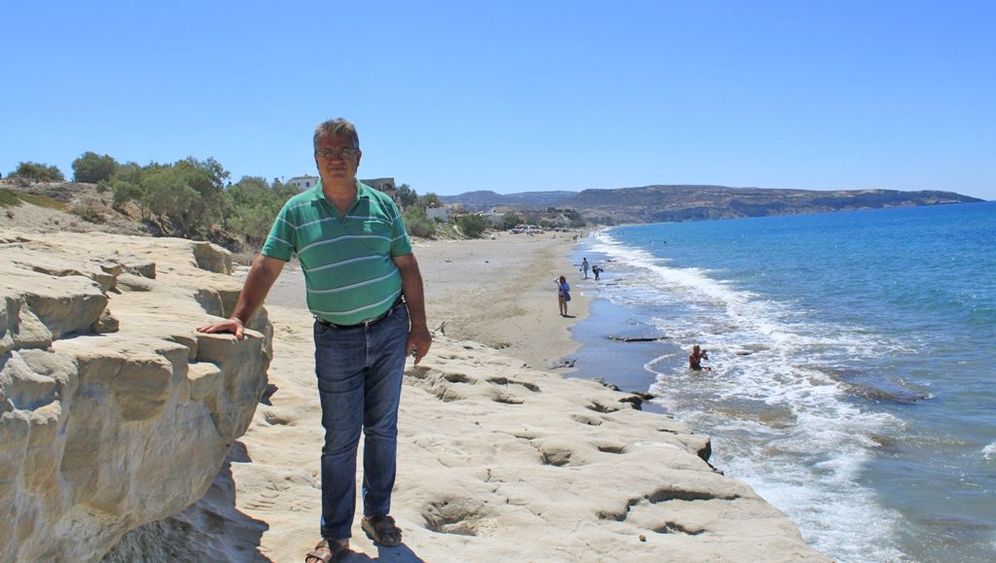 On some days, the situation reminds Thanasis Ktistakis of the terrible time when his father, Georgios, and his political allies fought the Greek military dictatorship in the mountains of Crete. At the time, every new supporter represented a minor victory against the junta.

Back then, the now-49-year-old Ktistakis decided to become part of the new, democratic Greece. After the junta collapsed in 1974, he was one of the first members on Crete of the Panhellenic Socialist Movement party (PASOK). From 1987 to 1994, he was mayor of the small communities of Kamilari, Kalamaki, Festos and Agios Ioannis, which lie on the most beautiful bay of Crete's southern coast. "I always did what I could," says Ktistakis, who is currently the parents' representative at his daughters' school.

These days, Ktistakis finds himself face-to-face with a new, overpowering adversary. Chinese investors are planning to build a giant container terminal in Timbaki, which lies at the beginning of a scenic, 3-kilometer (1.9-mile) stretch of sandy beach on his bay. An endangered species of sea turtle makes nests on the beach, and large sections of the shoreline are protected by an EU directive on nature conservation. The Chinese investors can count on getting all the support they need from Ktistakis's fellow party members in Athens because the government there needs every cent it can get its hands on to fend off national bankruptcy.

For years, unlike the massive hotel chains and developers, environmentally conscious farmers and homeowners who rent rooms to tourists along Kommos Bay have tried to attract only a manageable number of foreigners. "We were always proud of the fact that there was a line here that speculators couldn't cross," says Ktistakis, who makes some of his income this way in addition to producing organic olive oil and wine.

But, now, there are plans to build a modern container port, which would involve driving jetties three-to-four kilometers long and a 1,200-meter (3,936-foot) pier into the fine sand. If developers go forward with the plan, the shallow bay will have to be dredged to a depth of 16 to 17 meters. "When that happens," Ktistakis says, "nothing here will be the way it used to be."

The plan is already five years old. When Ktistakis first heard about it, he quickly gathered his neighbors together. Like Ktistakis, they had settled down in Kalamaki because they loved its relatively pristine environment. There were 25 at first, consisting of a number of locals and people who had moved to the area from Belgium, France, Germany, Great Britain and Italy. They arrived at a time when hippies had taken over the town of Matala, a short drive south on the bay, rolling their joints in the town's famous caves.

It has primarily been the heirs of the hippies, with their good contacts at home, who have taken the local residents' opposition to the development plan to Brussels and Athens. They have besieged the prefecture in Crete's capital, Heraklion, pressured political parties, mobilized support online and filed petitions from every corner of the globe. Regardless of their political affiliation, the mayors of all the towns along the small Gulf of Messara have supported the opposition movement. About a year ago, when the project seemed to have come to a standstill, they were convinced they had won the fight. "The match had clearly been decided in our favor," Ktistakis says. But now they face a rematch - and one they had and could not have expected.

Greece is broke, and the government desperately needs new sources of revenue. There are already plans to build a new airport in the central part of Crete, not far from Timbaki. And Greece's minister of economic development, competitiveness and shipping has been openly soliciting billions in investments from China.

The regional administration in Heraklion says the port will be built, that it will be completed in no more than five years and that the government plans to adopt the necessary resolutions in the next few months. There have been plenty of willing investors. South Koreans and Arabs from Dubai would have liked to invest in the project, but now it looks like the contract will go to China's state-owned China Ocean Shipping Company (COSCO).

COSCO has just signed a 35-year lease worth €3.4 billion ($4.3 billion) to operate the container port in Piraeus, just south of Athens. The Chinese are also interested in new logistic centers, other ports and the national railway service, which is running a huge deficit. If the Chinese get their way, Greece will become China's "gateway to Europe" and compete with Rotterdam, and Greece will become more and more Chinese.

COSCO wants to invest at least €500 million in Crete. If the port is built in Timbaki, it will have the capacity to transship about two million containers a year to nearby markets in southern Europe and the Balkans. In June, when Chinese Vice Premier Zhang Dejiang visited Athens to sign contracts worth billions, he also made a trip to Crete. "The Chinese are Coming," newspapers on the mainland rejoiced.

A Curse in Disguise?

Since the container terminal would be the first major port for ships from South Asia that have just passed through the Suez Canal, it would create completely new strategic options for oil giant BP's plans to drill new wells in the Mediterranean between Crete and the Libyan coast.

Likewise, it could bring about 800 new jobs to the area -- though that figure impresses no one here. It would also mean the loss of 6,500 tourists, Ktistakis says before recounting the tale of Prato, the former center of the Italian textile industry. "Now there are Chinese working there, in Chinese companies, at low Chinese wages and under Chinese conditions," he says. "But the clothes still have the 'Made in Italy' label."

Ktistakis says he will do everything in his power to stop the container port project a second time -- to save his bay and, with it, the history of Matala and its caves.