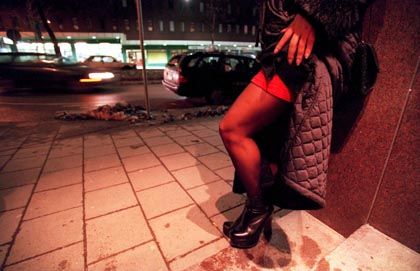 A prostitute waits for business on Malmskillnadsgatan Street. Stockholm only has about 100 women still actively working the streets today.

It's 9 p.m. in Stockholm and Malmskillnadsgatan Street is dead. The road, infamous for being one of the city's main drags for street prostitution, used to be packed with women, but tonight only three women are working the street.

For a long while, nothing happens, but then an older man with alcohol on his breath comes up the escalator from the Högtorget subway station. He pauses briefly in front of one of the women. Then she walks about 10 meters away and signals to him to follow her to a more discreet spot.

In Sweden's sex trade these days, caution is a good policy: The john could face up to six months in prison if the police caught the two in the act.

Sweden has now introduced the first law of its kind worldwide. The purchase and brokering of sexual services have been criminalized, although the selling of sexual services remains legal. The law provides for up to six years in prison for pimps and up to 10 years for traffickers of prostitutes. "The goal is to criminalize the demand side of the equation, the johns, rather than putting emotionally and physically imperiled women behind bars," says Jonas Trolle, an inspector with the Stockholm police who belongs to a police unit dedicated to combating the sex trade.

The ban is hardly controversial in Sweden these days. According to opinion polls, 80 percent of the population agrees with Trolle. When a majority consisting of social democrats, greens and leftists ratified the ban on purchasing sexual services in the Swedish parliament in 1999, conservatives were the legislation's main opponents. They argued that the ban would drive prostitution underground and make life more difficult for the women.

But it's easy to see the results. "We have significantly less prostitution than our neighboring countries, even if we take into account the fact that some of it happens underground," says Trolle. "We only have between 105 and 130 women -- both on the Internet and on the street -- active (in prostitution) in Stockholm today. In Oslo, it's 5,000."

Another benefit of the ban is that hardly any country in the European Union has fewer problems with human trafficking. According to the Swedish police, 400 to 600 foreign women are brought to Sweden each year to be prostitutes. In Finland, which is only half the size of Sweden, that number is between 10,000 and 15,000 women. Illegal trafficking is facilitated in Finland by the country's proximity to Russia and the Baltic states, but now Helsinki is also considering introducing a law based on the Swedish model. In Norway, the ruling Labor Party hopes to use similar legislation to fight human trafficking, especially of women from Nigeria.

Despite the prostitution ban, the number of convictions in Sweden is surprisingly low. Although a handful of pimps are sentenced to several years in prison each year, customers have so far managed to get away with fines and having their names entered in police registers. "The purchase of sex is difficult to prove," says Trolle. "Johns have to be caught in the act." Besides, he adds, it has taken time for members of the police force to accept the law. "But most officers have now realized that prostitution is not a normal business." The number of convicted johns has climbed from 11 in 1999 to 108 in 2006.

The ban on the purchase of sexual services is also intended to bring about a fundamental change in societal attitudes. Nowadays every schoolchild learns that purchasing sex for money is illegal. "The next generation in Sweden will consider this to be much less ordinary than we do today," says Trolle.

'I Need the Money'

Prostitutes themselves are, for the most part, opposed to the criminalization of their customers. They feel that they are being pushed into the role of victim and that the ban robs them of their livelihood. Take Johanna,* for example. She is 35 and one of the women who offers her services on Malmskillnadsgatan Street, usually at the end of the month. She is a heroin addict, and heroin is expensive. She charges the equivalent of €55 for having sex in a car. The fact that there are fewer customers narrows her choices. "When things are slow, the way they are tonight, I'm also willing to go with guys who want to get a little rough with me and don't want to use a condom," she says. "I need the money."

Lisa,* a woman in the southern Swedish city of Malmö, agrees. "The business has become tougher and more dangerous. There's more competition and more violence," says the 38-year-old, who has worked the streets for 12 years and sometimes stays at "Minnesota," a Malmö drug treatment facility.

She has been around long enough to remember the days before the ban on purchasing sex was introduced. "The nice customers are afraid of being caught," she says. "All that's left are the more troubled ones, those with whom you have to drive far out of the city so that they'll feel safe from the police. It puts you at their mercy."

Health care professionals have mixed feelings about the ban. "Cases of abuse and rape have increased considerably. The rate of sexually transmitted diseases has also gone up among streetwalkers because the lack of johns forces them to have sex without a condom," says Helena Cewers, a nurse who has been working for more than 15 years in an admission clinic for drug-addicted women in Malmö and knows almost every hooker in the city.

Only a few years ago, Cewers was vehemently opposed to the criminalization of johns. At the beginning, she says, the law did nothing but target johns, while doing nothing to help hookers deal with the significant changes in their situation. "All they talked about was bans and penalties, but not about the effects on the girls," says Cewers. "But now they're finally doing more for the girls. There are more social services that actively help prostitutes get themselves out of their dilemma." Withdrawal programs with the heroin substitute methadone and other treatments have also been made more available to prostitutes, says Cewers.

In fact, Cewers has actually become somewhat of a supporter of the ban, although she continues to believe that prostitution should be abolished altogether. "It's true: There are no happy whores. Most of the ones I've met here over the years were sexually abused by relatives when they were young and have serious emotional problems," she says. "Not much of this is about choice."

Those who have been doing it for a while, says Cewers, take drugs or sedatives. "This is not a normal profession," she says. "I wish all of them could get out of it."

* Editor's note: To protect the identity of those interviewed, some names have been changed.