The rhetoric sounded strangely familiar. There is no Europe without the euro, German Chancellor Angela Merkel had said ahead of Tuesday's meeting of the 16 euro-zone finance ministers in Brussels. The EU was in a "survival crisis," seconded European Council President Herman Van Rompuy. Meanwhile Luxembourg's Prime Minister Jean-Claude Juncker, the head of the Eurogroup of finance ministers, asserted that they would defend the euro by any means.

Europe's leaders had used precisely such words back in May, before they decided on a €110 billion ($150 billion) rescue package for Greece. Are they about to do the same thing for Ireland?

Apparently not. When the next candidate for a bailout was discussed at the late-night meeting on Tuesday in Brussels, the finance ministers appeared unwilling to put their money where their mouths are. Instead of announcing a concrete aid figure for Ireland, the finance ministers were basically content to repeat -- for the umpteenth time -- that the EU would help Ireland in an emergency.

Merkel also attempted to strike a calming note. "I do not believe that the euro zone is at risk, but we are experiencing turbulence and situations of a kind that I would never have dreamed of a year and a half ago," she told the German public broadcaster ARD. "The most important thing is that, apart from the rescue measures that have been agreed to, we coordinate our economies better with each other."

The EU and the International Monetary Fund (IMF) will now send a larger group of experts to Dublin to work out a support package for the Irish banks, as a precursor to a possible bailout. "This can be regarded as an intensification of preparations of a potential program in case it is requested and deemed necessary," European Monetary Affairs Commissioner Olli Rehn said after the meeting. He did not, however, give details or name any figures. Neither did other participants in the meeting. Hence the question remains open why a second emergency plan is required, given that the EU's €750 billion stabilization fund has been available since the Greek crisis and could be used to help Ireland.

After the meeting, the ministers went to bed without having reached any concrete decisions and were presumeably awaiting the opening of financial markets on Wednesday morning with a certain amount of trepidation. They must have been asking themselves if the markets would believe their assurances, or if they would send the euro into turmoil again.

The reason for the vague statements from Brussels is simple. The Irish government does not want help. It took a firm line at the meeting, despite pressure from the other troubled euro-zone countries -- Portugal, Spain and Greece -- and the European Central Bank (ECB). They are all concerned that the euro will falter once again and that yields on bonds issued by all the euro zone's problem countries will rise dramatically.

Ireland is nevertheless insisting it does not need the EU's aid. It does not need to refinance its government bonds on the markets until next summer, and it hopes that the worst will be over by then. Irish Finance Minister Brian Lenihan told his colleagues on Tuesday that he did not have a mandate from the Irish government to negotiate an emergency package.

The government in Dublin fears the stigma that would be attached to a bailout. The bond markets would effectively be closed to the country for years, and the EU and the IMF would have even more power to dictate the Irish government's policies than is already the case.

The other euro-zone finance ministers can not force Ireland ministers to accept the money. They are now hoping that Dublin will have a change of heart over the coming days. In a concession to the conservative Prime Minister Brian Cowen, they talked of preparing an emergency plan for the ailing Irish banks as an alternative to a bailout for the state. The Irish government has now a few days to make a decision, Juncker said.

The Irish government has set up a deposit guarantee scheme for six of the country's financial institutions, the most prominent being the nationalized Anglo Irish Bank. As a result, Ireland's deficit has temporarily ballooned to 32 percent of its gross domestic product -- over 10 times as much as allowed under the EU's Stability Pact.

The disagreement of the finance ministers illustrates just how far apart the euro-zone countries are in their positions on how to deal with the crisis:

The financial markets will hardly be impressed by the half-hearted assurances made by the euro-zone finance ministers. Besides, expectations for Tuesday's meeting had been ratcheted up too high over the past few days. As a precaution, several representatives of the euro zone made statements emphasizing that an aid package for Ireland would be available within days if a call came from Dublin.

The Irish government's resilience will be tested again in the coming days. Other European countries will try to entice it with promises. According to French Finance Minister Christine Lagarde, bilateral aid would be possible, involving Britain alongside the euro-zone countries. According to the Financial Times, the British government is considering providing assistance to the tune of several billion pounds.

So far, the Irish government has continued insisting that it will manage by itself. It is currently working on its four-year budgetary plan, which is expected to be presented next week. The plan is supposed to calm the markets. Many observers fear that hope will be in vain. 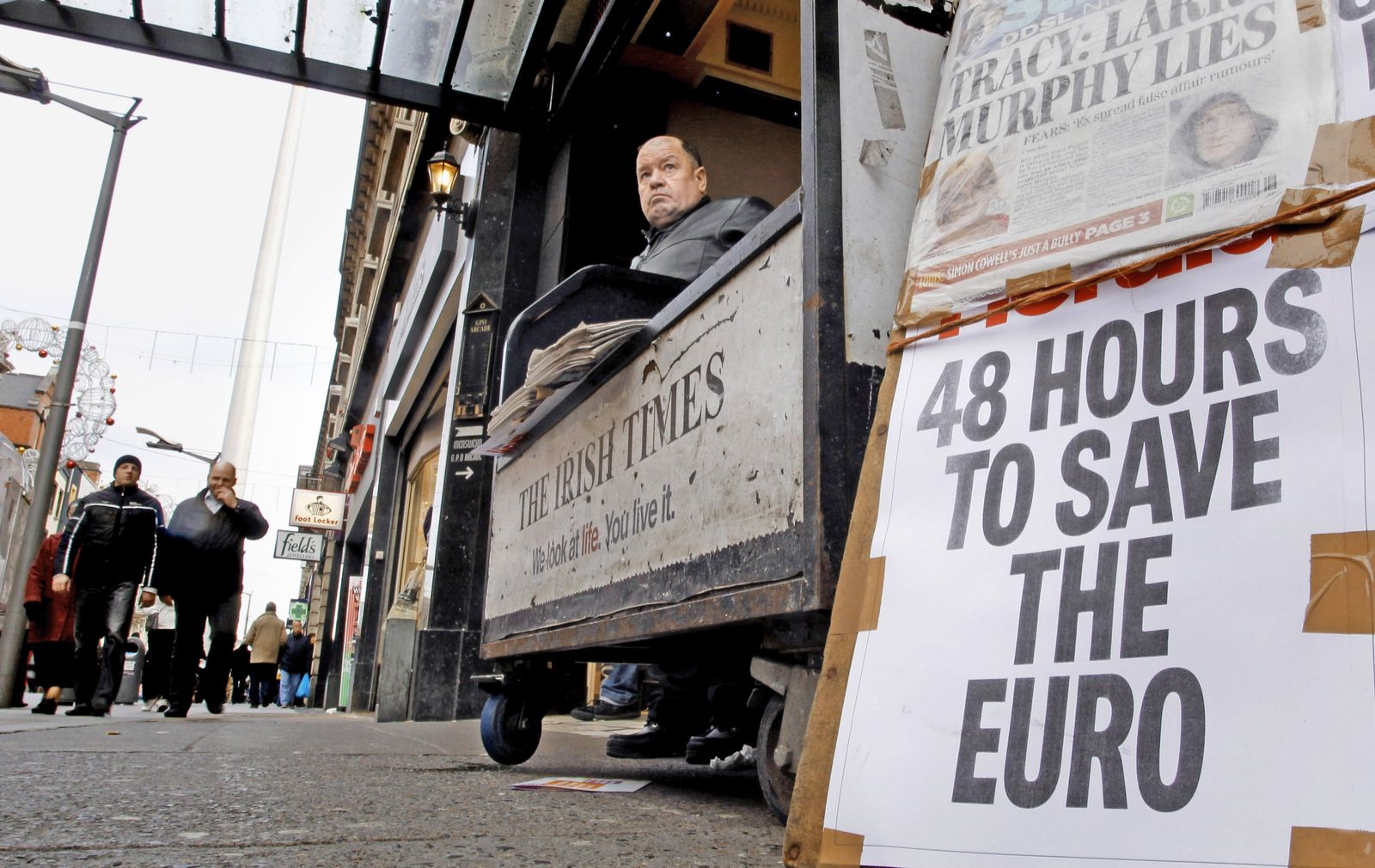 A newspaper seller in Dublin on Monday: Ireland is insisting it doesn't need help from the EU.