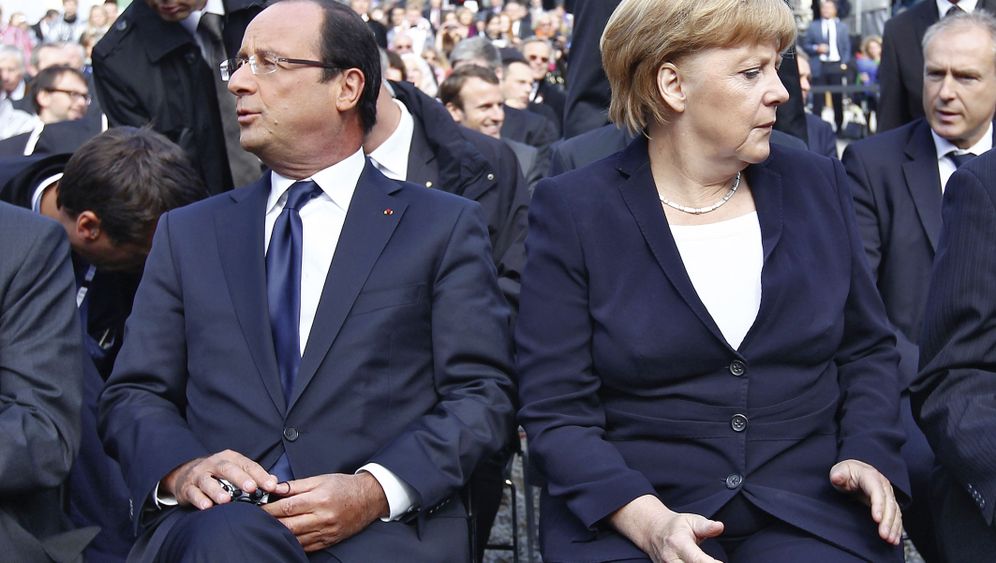 Photo Gallery: A Crisis of Confidence Between Merkel and Hollande

One of the age-old exercises in European politics is to transform even the most wonderful news into messages of discord. What is new is that the governments in Paris and Berlin are proving to be especially adept at this strange discipline.

It was last Thursday evening in the somber government building in Brussels. The leaders of the 27 European Union countries had just convened for a crisis summit when German Chancellor Angela Merkel surprised them with a novel proposal. What if everyone at the summit would fly to Oslo together in December to jointly accept the Nobel Peace Prize, as a sign of European unity?

The other European leaders' reactions were reserved. Italian Prime Minister Mario Monti said that it ought to be sufficient for the heads of the European Commission, European Council and European Parliament to make the trip. British Prime Minister David Cameron proposed sending a child from every member state to Oslo. Finally, though, the issue was decided when French President François Hollande rejected the idea of a joint trip altogether, when he said caustically: "I'm not an extra."

Europe's most powerful political team is unable to find a common denominator, from the question of who should be picking up prizes or, more tellingly, to the much broader issue of rescuing the euro. At the Brussels summit last week, Merkel and Hollande, after arguing for hours, agreed on a slim formulaic compromise on the banking union, while all other contentious issues remained unresolved.

Since the days of former German Chancellor Konrad Adenauer and former French President Charles de Gaulle, Germany and France have generally been run by politicians who placed more value on unity than their differences. The axis between former German Chancellor Helmut Schmidt and former French President Valéry d'Estaing axis proved to be just as resilient as the partnership between their successors, Helmut Kohl and Francois Mitterand.

Under Merkel and Hollande, however, the German-French partnership threatens to deteriorate into nothing but a façade. The two politicians, who hold the fate of the continent in their hands, greet each other politely with kisses on the cheek, and their respective public relations staffs extol their "professional" and "trusting" cooperation.

In truth, however, the relationship began on a cool note and has since slipped below the freezing point. Hollande doesn't want to forgive Merkel for having campaigned for his conservative opponent, former President Nicolas Sarkozy. Now the Chancellery suspects that Hollande is secretly planning a campaign for Merkel's challenger from the center-left Social Democratic Party (SPD), former Finance Minister Peer Steinbrück.

Mistrust shapes the relationship between Paris and Berlin, on issues ranging from future European bank regulation to the joint aerospace and defense group EADS and the future architecture of Europe. Hollande suspects that Berlin is using budget consolidation as an excuse to gain European dominance. Merkel notes with unease that Hollande is joining forces with Rome and Madrid to form a joint axis against Germany.

Last Monday, a joint interview with the French president at the Elysée Palace given to six European newspapers offered a sense of how deep the divide is. In the one-hour meeting, Hollande not only criticized German policies more sharply than he ever has before since taking office, but he also rebuffed Merkel's austerity course. "It is France's task to tirelessly tell our partners that there are alternatives to a policy of austerity," Hollande said.

His predecessor Sarkozy also had differences of opinion with Merkel. Nevertheless, the two leaders always managed to agree on a joint position prior to a summit. This has changed, with the two sides now intensifying rather than smoothing over their conflicts prior to meetings.

When Hollande emerged from his car in front of the European Council building in Brussels on Thursday, he said venomously that Merkel is dragging her feet on European issues because, as everyone knows, she "has her own deadline, in September 2013," referring to the next federal election in Germany. Merkel had previously renewed her call in the German parliament, the Bundestag, for the EU's right to intervene in national budgets, an idea Paris decidedly rejects.

Then the two leaders met privately, hoping to find some common ground despite their differences. But it was clear to everyone who saw Merkel and Hollande marching from their conference room to the Council chamber that the meeting had ended on a sour note. The two politicians looked tense as they spoke with each other, talking so quickly that the interpreters could hardly keep up, with Merkel energetically shaking her head here and there. Only when they had reached the Council chamber did they suddenly put on smiles.

It's been going this way for months. They feign harmony in public, but in reality Merkel and Hollande are living in parallel universes. Their views of the world couldn't be more different.

In recent months, impatience with Germany has grown to open displeasure at the Elysée Palace. Hollande believes that the crisis can only be solved if Europe introduces shared liability for debts. His staff is constantly introducing new proposals that tend to differ in name only: euro bonds, euro bills, a debt repayment fund.

The French are also annoyed that Berlin is incessantly calling for strict budget controls while the continent slips into recession. Paris is critical of what it calls Germany's obsession with austerity, and it believes that cutting spending in a sagging economy is the wrong approach. "A fundamental discussion of this austerity policy is in the air throughout Europe," say officials at the Elysée.

Hollande accuses the Germans of having double standards. He argues that they are demanding a lot of other Europeans while unilaterally pursuing national interests, as was the case with aircraft maker EADS. The German-French group wanted to merge with the British defense contractor BAE, which would have created the world's largest aerospace company, but it would also have jeopardized jobs in Bavaria.

Hollande's supporters complain that Merkel vetoed the deal without explanation and without agreeing to new negotiations. They argue that by intervening, Merkel, who is always calling for more competitiveness and less government, is actually preventing the European defense industry from becoming more competitive.

Officials at Elysée Palance don't seem to understand their counterparts in the Chancellery and, conversely, Berlin is at odds with the new administration in Paris. The Germans had already lowered their expectations before Hollande came into office, and the relationship has steadily deteriorated since then.

The journalistic broadside that Hollande fired at the Germans before the EU summit was a "remarkable move," sources within Merkel's administration say diplomatically. Translation: It was "incredibly impudent."

Merkel apparently sees the interview as evidence of the Frenchman's political inexperience. Hollande is a novice in the business of governing, Berlin officials say disparagingly. Unlike his predecessor Sarkozy, he had not held any government posts before becoming president. This is why, from Germany's perspective, he is making mistakes that would never have happened to his predecessors, especially in European policy.

The Germans are particularly dismayed over Hollande's attempt to paint himself as the spokesman of the southern EU countries. It upsets them that the Frenchman is reviving old plans for a Mediterranean union on Europe's southern edge. In early October, Hollande met with the leaders of four other Southern European and five North African countries at a conference in Malta. Officials in Berlin complain that after having painstakingly disabused Sarkozy of the notion of a new southern axis, they now have to start all over again.

Merkel's confidants fear that Hollande is accelerating France's economic decline, to the detriment of all of Europe. Although the president pushed through the fiscal pact, they argue, he hasn't done much else to modernize his country.

"You don't get France's problems under control by raising taxes and lowering the retirement age," scoffs a German government official.

Whether the issue is reform, spending money, solidarity or integration, there have been many crises in the German-French relationship before, but the rift has never been this wide. The two sides have accused each other of playing with marked cards ever since the unsuccessful June summit in Brussels.

At the time, the Germans and the French had agreed to develop a joint European financial regulatory agency, which was to bail out ailing banks if necessary. The French interpreted the agreement to mean that the so-called banking union was to commence on Jan. 1, 2013, but that apparently didn't coincide with the German view. In Berlin, officials fear that if the launch date is too early, Germany will be stuck with large liabilities for struggling Southern European banks.

The disagreement led to an open quarrel. In mid-September, German Finance Minister Wolfgang Schäuble said publicly that the launch date was not to be. His French counterpart, Pierre Moscovici, was furious. "No, I don't agree with Mr. Schäuble," he said after a meeting in Cyprus, noting that there was no reason to delay.

The conflict was postponed at last week's summit. Germany managed to convince EU leaders that joint funds could only be paid to banks once the new regulatory agencies are fully operational. But France continues to push for creating the necessary conditions in the coming year.

The situation is no less muddled at EADS. Now that the proposed merger with BAE has fallen apart, the German government wants to sell some EADS shares to automaker Daimler in the coming weeks. It urgently needs Paris, because Hollande has to approve the deal so that the Germans will be included in a shareholder package that would guarantee them an important voice in the company.

But Berlin isn't doing much to mollify the Hollande administration. On the contrary, the German government is currently refusing to provide financial support for the development of the new Airbus A350 wide-body jet. The German Economics Ministry is holding back €600 million ($780 million), whereas Paris paid its share long ago.

Europe's Engine Is Becoming Its Brakes

With the number of German-French conflicts on the rise, the erstwhile engine of European unification has now become a braking factor instead. The entire EU is waiting for Germany and France to finally reach a compromise over the future architecture of the euro, but Berlin's and Paris's ideas on the issue are still far apart.

Chancellor Merkel insists that Brussels should be able to monitor national budgets in the future. "We should give Europe real rights of intervention in national budgets," she said in the Bundestag last week.

Hollande opposes the idea. In addition, a transfer of sovereignty rights would require amending European treaties, which could be discussed at an EU convention, the results of which would have to be approved by the people in France. Hollande, however, fears that the majority of Frenchmen could say "non" to a referendum, as they did in a 2005 referendum on the European constitution. The French president envisions things basically remaining unchanged in Europe, with the heads of state and government continuing to have the last word.

If an amendment to the treaties is to be discussed at all, it will have to include the so-called communitization of debt, says Hollande, in reply to German thoughts on the issue. But this would be "out of the question" as long as "there are individual national budgets," the chancellor said after the summit.

The fronts are hardened, and time is running out. Under the agreement reached by the European leaders, the EU reforms should be approved by December, if possible.

Much is at stake. If the quarreling partners don't find a convincing solution, the euro crisis could intensify even further, with unforeseeable consequences for all of Europe. The fear of a crash is the one sentiment Paris and Berlin still share wholeheartedly, and it's what Europeans are relying on.

"Germany and France will come to terms in the end," says a senior EU official, "as they must."