For six days, it seemed like Sajad’s dream of a life in Europe might come true. The Afghan teenager departed Bosnian soil, crossed the border to Croatia and kept walking through hail and pouring rain. He planned to apply for asylum in Zagreb, a safe distance from the border, he thought.

Sajad, who is 16, has a childlike face and wears glasses, doesn’t want his last name printed. He says he’d like to become a hairstylist in Europe. He fled Afghanistan together with his family three years ago. The family crossed Turkey, lived in the Moria refugee camp in Greece for one year, and then came to Bosnia via Thessaloniki. Sajad’s uncle was also part of the group heading to Zagreb, an older man with a heart defect who limped behind the group using a crutch. For a long time, Sajad says, things were going well.

Sajad, 16, in the forest at the border: He long ago stopped counting how many times he has tried to cross it.

But now, six days later, Sajad and his family are back on the Bosnian side of the border, their clothes soaked. Sajad says the Croatian police caught them shortly before Zagreb. He says they were not allowed to apply for asylum and that not even the sight of the small children had changed the officials’ minds. His sister breaks into tears as he describes it, his mother crouches on the ground. Sajad says the officials had yelled "go back to Bosnia” and driven them back to the border.

What happened after that has been recorded in videos. They show, among others, Sajad and his family. Police officers, evidently Croatian border officials, lead the Afghans out of the Croatian forest and over the border to Bosnia and Herzegovina. They command the asylum-seekers to keep moving until they are far enough away from European soil.

The European Union closed the Balkan Route in 2016 by force. Ever since, thousands of migrants seeking to reach Western Europe have been camping in the woods of northwestern Bosnia and Herzegovina. On the other side of the border, Croatian officials conduct patrols with night-vision equipment and firearms. Nevertheless, refugees like Sajad repeatedly try to make the crossing. There's even a name for these attempts to evade the border guards, "The Game," but it's a dangerous one.

Asylum-seekers have been reporting for years that the Croatian border police catch them and use force to return them to Bosnia, producing what are often disturbing scenes. Last autumn, DER SPIEGEL published a video showing how people with covered faces at the Bosnian-Croatian frontier beat male Pakistani refugees and forced them back to the other side of the border. Human-rights activists report of excessive force, dog bites and electric shocks.

The actions, known as "pushbacks," violate Croatian asylum law, European law and the Geneva Convention Relating to the Status of Refugees. They also make a mockery of the cornerstone of the right to asylum: Instead of being afforded a personal hearing and an individual asylum process, people seeking protection are simply being collectively pushed back.

To this day, the Croatian government denies having carried out illegal pushbacks at the border to Bosnia. At a press conference last fall responding to DER SPIEGEL’s reporting, Davor Božinović, the country’s interior minister, dismissed the report as a campaign waged by opponents of Croatia. He said the people in question were just young men without families who had no special need for protection. He has claimed that the images, all taken by asylum-seekers themselves, were produced somewhere outside of Croatia.

The videos recorded in the course of their reporting debunk the Croatian government’s denials that pushbacks are taking place. They show that Croatia is systematically pushing people back at the border to Bosnia. The reporters filmed a series of six pushbacks at just one location along a border that is 1,000 kilometers (630 miles) long.

In the span of only one week, the officials pushed about 65 people back over the border, including small children, frail older men and a heavily pregnant woman.

Contrary to the government’s claims, people in particular need of protection are also falling victim to the border police. In the span of only one week, the officials pushed about 65 people back over the border, including small children, frail older men and a heavily pregnant woman.

(Note: The following video from the report is currently only available in German. We have provided the link as a courtesy.)

Sajad’s Story Is One of Many

A few days after they forced Sajad back to Bosnia, border guards once again appear in the forest by the border. On this May evening, there is thunder and lightning and the forest paths turn to mud. With the help of night-vision equipment, the border police can be seen despite the darkness. During the evening, they release four families in the middle of the no-man's land on the Bosnian side of the border, far from the official border crossing. One child is still so small that it needs to be carried. The nearest village is about four kilometers away.

The refugee families flee into an abandoned house to take shelter from the rain. Several women and children are already sleeping when the reporters reach the house. Soaked children’s clothes hang on the walls. An old man asks for painkillers.

Anwar with his nephew: "We're like animals to them."

"We're like animals to them,” says Anwar, a young Afghan who once fled from the Taliban and would prefer not to state his real name. He is holding his seven-year-old nephew in his arms. The boy has a visible scar on his head. Anwar says that his nephew has problems with his eyes, with his head and legs. His family wants to find a good doctor for him in Germany, but so far they have always failed to make it past the Croatian border.

The faces of the border police are partly recognizable in the videos. One police officer can easily be identified as a member of a Zagreb unit. Online, he likes to portray himself as being friendly to children, even though at work he is illegally pushing back minors.

In response to a request for comment from DER SPIEGEL, the Croatian Interior Ministry stated that the actions are legal refusals of entry directly at the border. It claims that in these cases, it had been unnecessary to bring the people to a police station to determine the "needs of the migrants” and that Croatia is abiding by national and international rules when it comes to border protection. The ministry stated that, in the past five months alone, 339 people in the region have applied for international asylum protection.

But the Interior Ministry is ignoring the fact that the asylum-seekers say they had already made it far into Croatian territory. In such cases, EU law prohibits deportation over the border and requires that the migrants be allowed to submit an application for asylum and for the proper asylum procedures to be completed. On top of that comes the fact that those who were pushed back included partly pregnant women, babies or frail people who are all in special need of protection.

In recent years, the EU has provided over 160 million euros ($191 million) in financing to secure Croatia's external border. Germany has provided the Croatian border police with thermal imaging cameras and minibuses. Croatia is soon expected to be allowed to join the Schengen area, whose internal borders are not controlled. The Croatian government is therefore already positioning itself as Europe's gatekeeper.

Entry into the Schengen area needs to be unanimously approved by all the countries in the border-free zone. So, theoretically at least, the EU and its member states could exert pressure on the government in Zagreb. Tineke Strik, a Dutch member of the European Parliament, argues that the European Commission should force Croatia to give people access to asylum procedures. She worries that the EU's credibility will suffer if blatant pushbacks are allowed to continue unsanctioned.

But Sandra Benčić, a green-left member of the Croatian parliament, argues that there should be no illusions. "Ultimately, it looks like the EU might accept us into the Schengen area even though our police simply push back those seeking protection,” she says. Border guards, she argues, are being forced by the government to do the pushbacks, and they are doing so on behalf of the EU.

Croatia Appears To Be Blocking Report on Pushbacks

Ylva Johansson, the European commissioner responsible for asylum policy, doesn’t seem willing to publicly expose the Croatian government for its pushbacks. After viewing the videos, Johansson told DER SPIEGEL and its research partners that she has seen countless similar reports and that she believes them to be credible. She says that every allegation would need to be investigated, but that Croatian Prime Minister Andrej Plenković has also shown understanding of the issue during her visits with him. In the meantime, she says, he has promised to establish an independent monitoring mechanism to ensure that human rights are respected at the border.

An illegal pushback by a Croatian official: Many are provided with no opportunity to submit an application for asylum protection.

Nevertheless, the public pressure on Croatia may still continue to mount. The Council of Europe’s Committee for the Prevention of Torture has been investigating the pushbacks since the summer of 2020, with some members making unannounced trips to the border between Croatia and Bosnia. Even though the committee approved the report by the inspectors last November, it still hasn’t been published. Behind the scenes, people say that the report clearly confirms the human rights violations and that Croatia is doing everything in its power to prevent its publication. The Croatian Interior Ministry denies this.

If the Council of Europe’s report is released to the public soon enough, it could jeopardize Croatia's accession to Schengen. For Sajad, though, it would probably come too late.

Five days after the pushback, he is sitting with his family in the ruins of a half-built house, drinking tea he boiled on the fire in an old tin can. Sajad’s uncle is leaning against a wall, his crutch set to the side. The adults have set down blankets, the children are running around. Sajad says he long ago stopped counting how often he has tried getting across the border into the EU. Soon, it will have been 10 months since he arrived in Bosnia. Tomorrow, he wants to try again.

With additional reporting by Jack Sapoch and Lamia Šabić 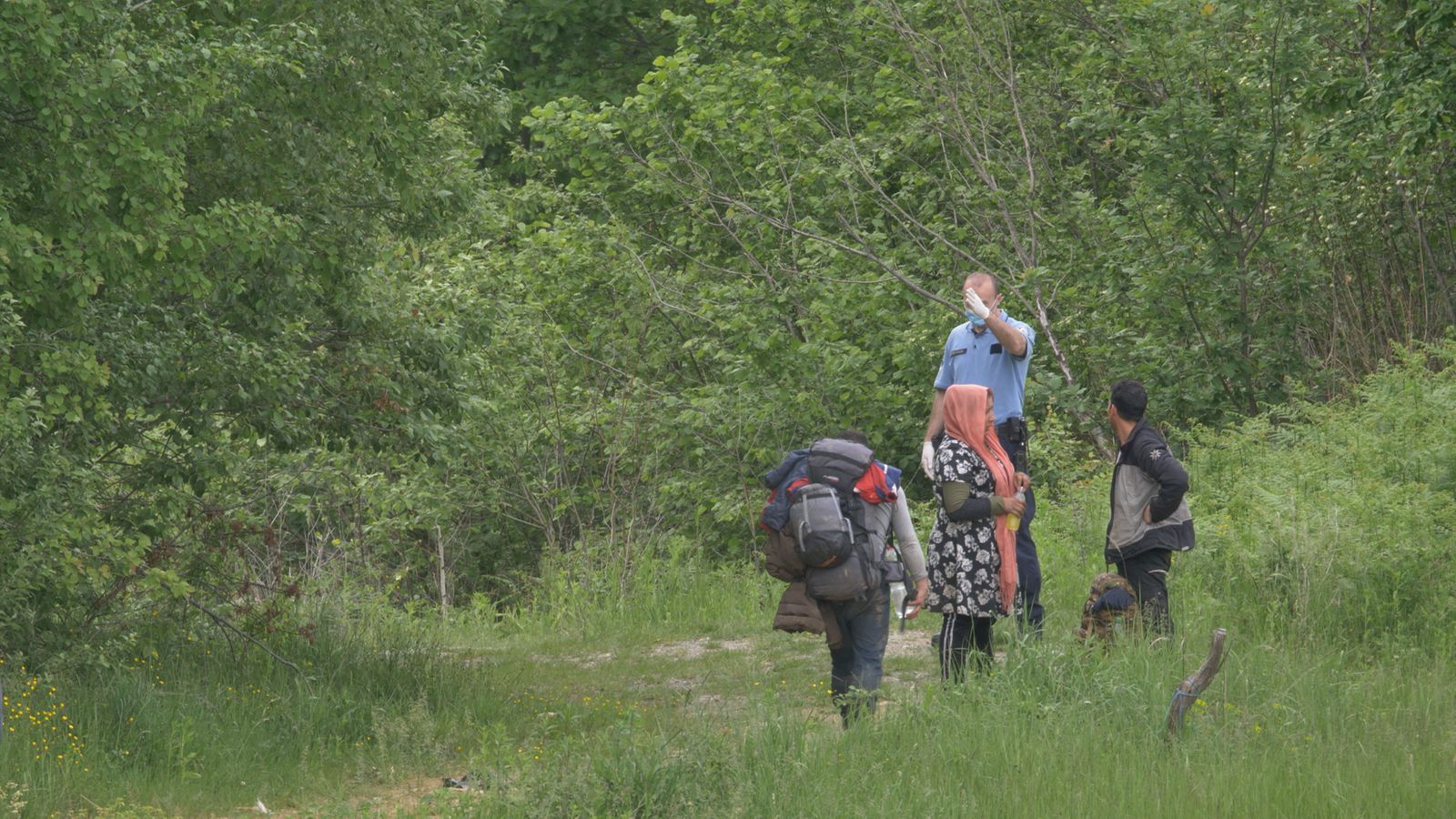 A pushback at the EU's external border: "Go back to Bosnia” 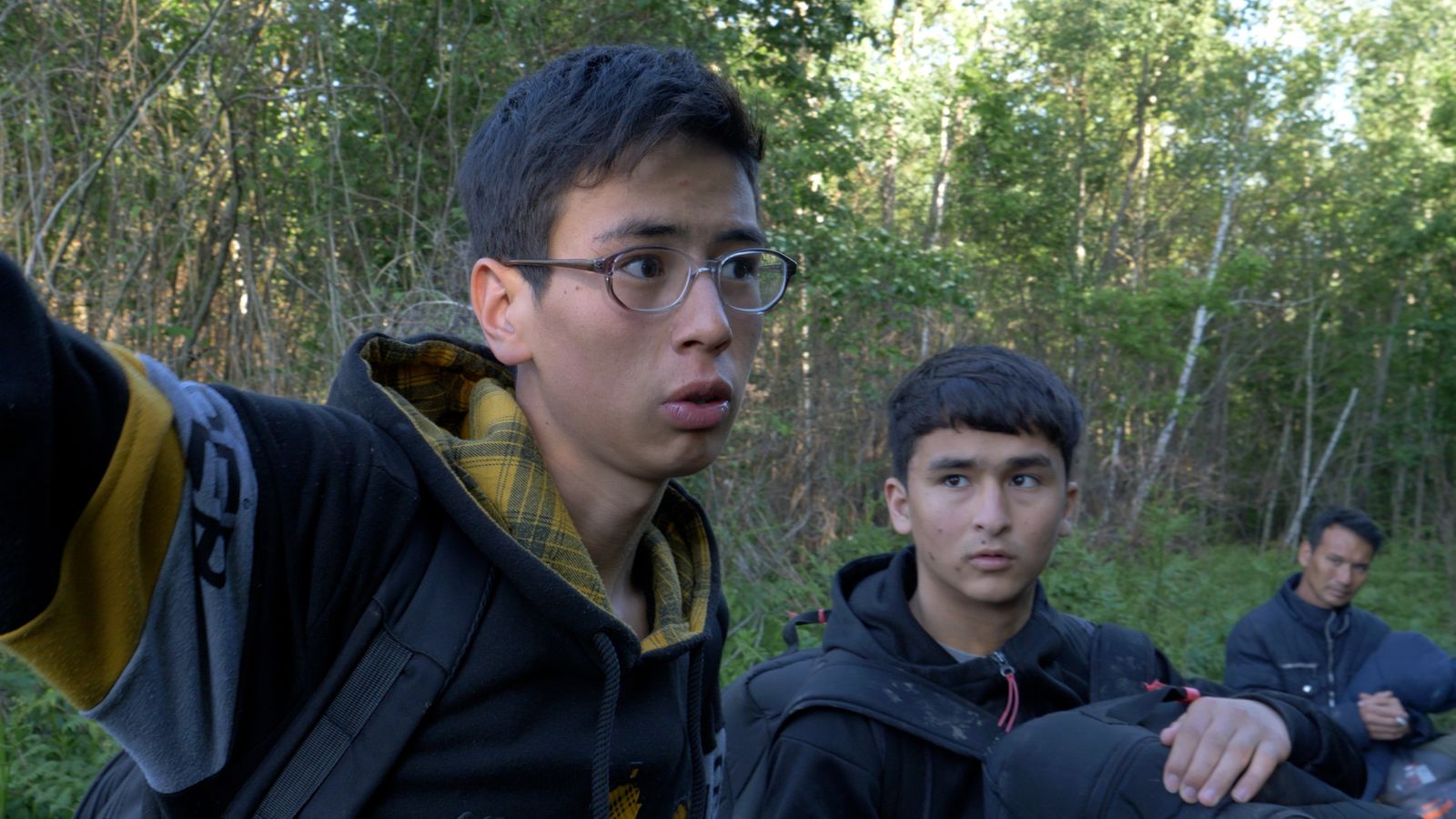 Sajad, 16, in the forest at the border: He long ago stopped counting how many times he has tried to cross it. 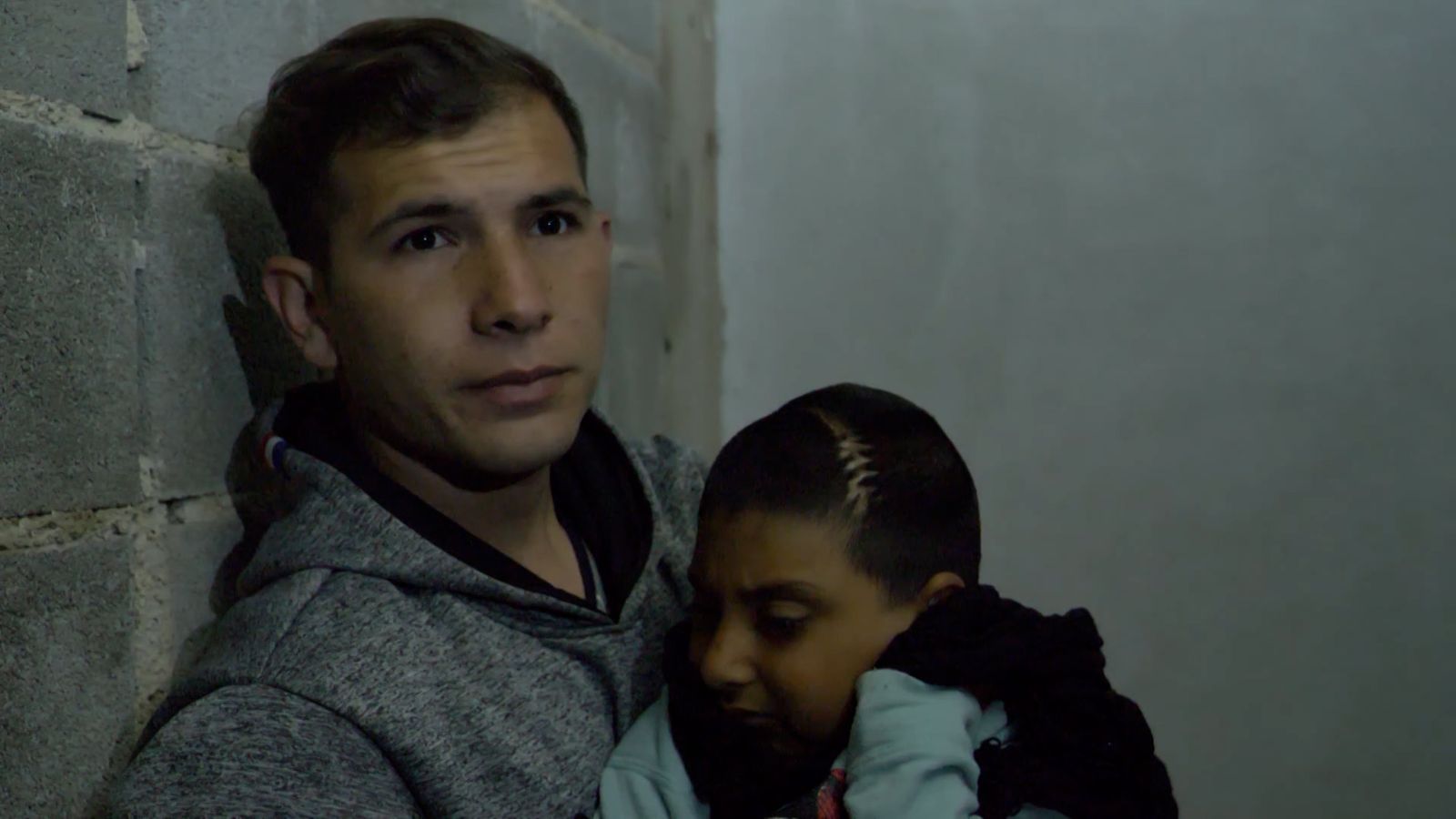 Anwar with his nephew: "We're like animals to them." 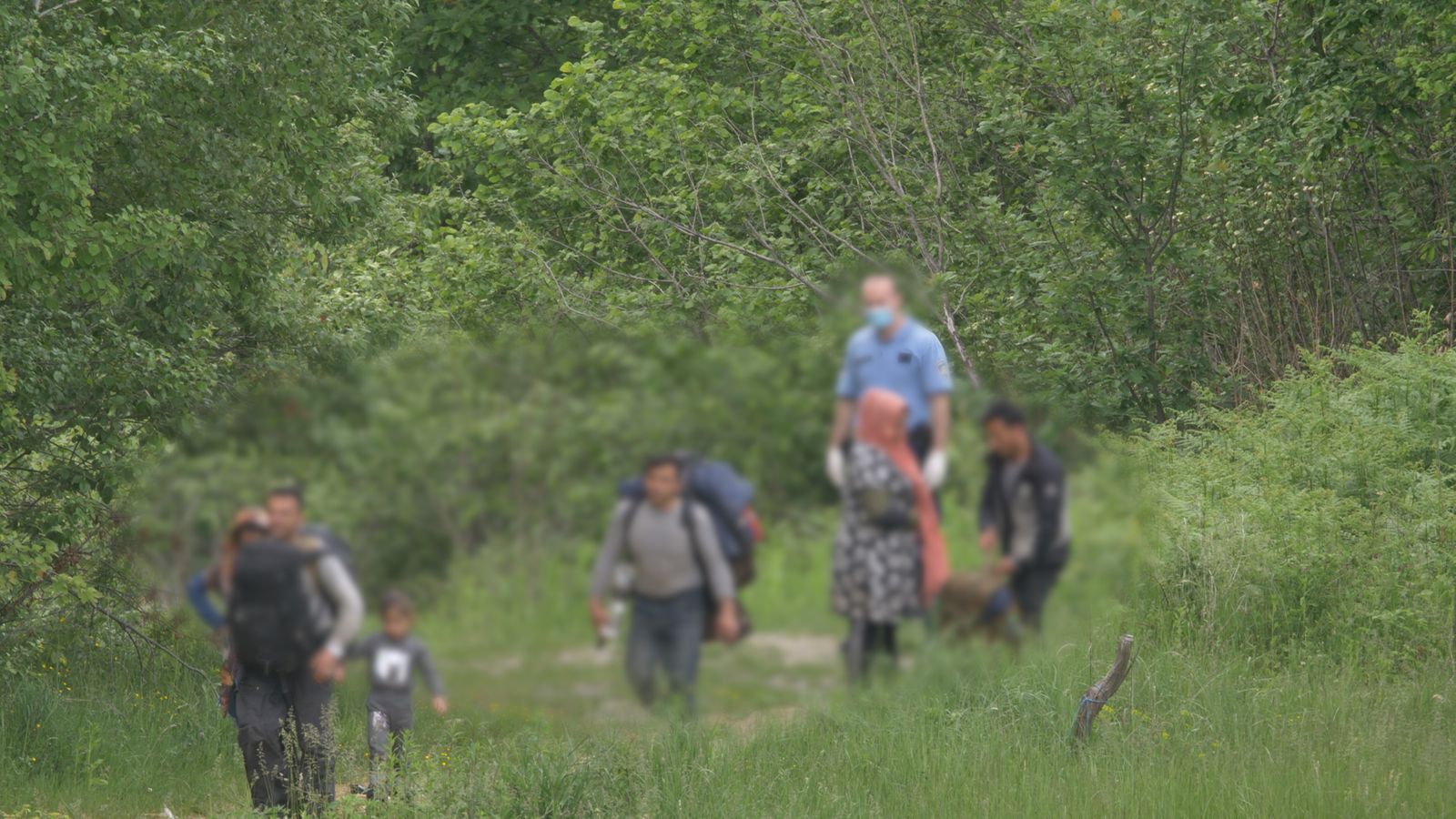 An illegal pushback by a Croatian official: Many are provided with no opportunity to submit an application for asylum protection.