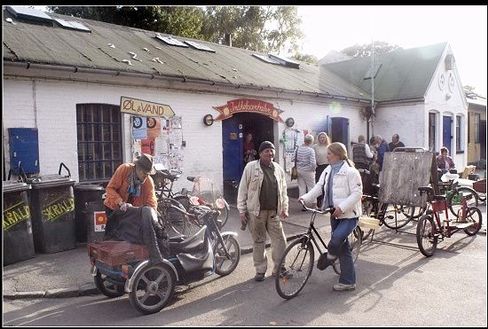 Besieged Christiania residents in Copenhagen: "We don't want to be normalized, we want to be legalized."

Daily life for Nils Vest, 64, is as colorful as it is tranquil. The award-winning documentary filmmaker and his wife, actress Britta Lillesøe, have spent the last 36 years living with more than 900 like-minded people on an 80-acre plot of undeveloped land in the middle of Copenhagen. The community lives without cars and sets its own rules and is, as Vest says, not unlike a "very large family."

Christiania consists of about 300 randomly scattered houses and huts. The buildings include historic factory buildings and military barracks, self-designed wooden houses, shacks made of scrap wood and even aging construction vehicles. What Vest calls a "dream of our own city within the city" lies in a picturesque location, wedged between Copenhagen's harbor and the old city moat -- a scene he likens to that of a "wonderful fairy tale."

Vest's fairy tale is the Free State of Christiania, a product of the 1970s, when anarchists, hippies and other alternative groups founded their own little island in the midst of an ocean of bourgeoisie.

Since then authorities have tolerated the community, which was eventually dubbed a "social experiment," but its days could soon be numbered. The colorful Christiania settlement faces the prospect of a radical reorganization, one in which police could very well end up clearing out residents by force.

"If that's what they want they'll have street fighting," says resident Dan Holm, 22, who expects thousands of supporters, including some from the anarchist Black Bloc, to rush to Christiania's aid.

The predicted mayhem could well be a repeat of an incident in March when the Ungdomshuset Youth Center was torn down, triggering protests that erupted into violence, complete with torched cars, barricades in the streets and days of clashes between demonstrators and the police.

"A Paradise for Losers"

Christiania, which residents affectionately call a "paradise for losers," has long been a thorn in the side of Denmark's center-right minority government, which has other plans for the property. Once a vacant lot owned by the Danish navy, it has since become a prime piece of Copenhagen real estate worth hundreds of millions of kroners. The centrally located district known as Christianshavn, with its harbor, canals and ponds, is one of the city's hippest residential neighborhoods.

Parts of the former Holmen naval base and the surrounding neighborhoods have been turned into chic, expensive condominiums with harbor views. The crown jewel of the new development is a stone's throw from Christiania's aging, rock-and-pop hippie milieu and is its ideological opposite: the new Royal Opera House, an opulently designed glass-and-steel structure.

If the government has its way, Christiania will be next in line for gentrification. 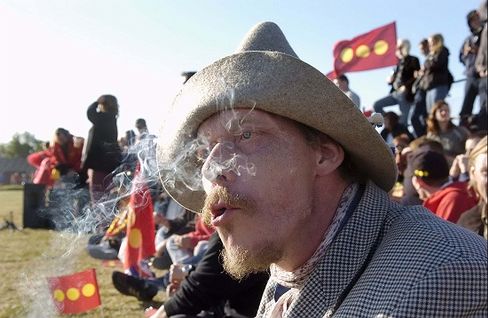 A Christiania supporter smokes while watching a soccer match between residents and the police.

Prime Minister Anders Fogh Rasmussen and his coalition are especially perturbed by a still-lively hashish and marijuana market, which has been around for almost as long as Christiania. There have been some changes, however. In response to pressure from the police and authorities, a block known as "Pusher Street" has since been shut down. For decades the street featured up to 30 open-air street stalls where drugs were sold both openly and illegally, for millions of kroners a year, to customers from Copenhagen and tourists from around the world. The dope trade may be more clandestine these days, but sales of pizza, pot and posters at Christiania are still going strong.

The settlement has its own kindergarten and daycare center for its 250 resident children and adolescents, and it features architectural curiosities that are routinely featured in the professional literature. They include a pagoda house and a banana-shaped hostel for traditionally wandering journeyman called the "Bananhuset." Military barracks and ammunition warehouses with landmark status have been lovingly restored, while wooden houses, curious mixtures of Scandinavia and the American West, are examples of carpentry as skilled as they are fanciful.

A Question of Rights

"No one talks about the value that has been created here," says Morten Nilsen, 50, who works as a tour guide in Christiania. One of the settlement's original residents, Nilsen is adamant about what he feels are his and fellow residents' rights.

Rights are precisely the issue here. Nils Vest and Britta Lillesøe raised their children in a renovated military barracks that was built in 1849. The structure, which once stood in the town of Fredericia in Denmark's Jutland region, was dismantled piece by piece, reassembled in Christiana and renovated into an architectural gem. "This is my home," says Lillesøe, and yet official permits for moving the building were never issued. "We don't want to be normalized," says the graying actress, "we want to be legalized."

'It's Hard for 650 Hippie Anarchists to Reach a Consensus'

Lillesøe was among the first hippies and squatters to occupy the decaying military barracks on the dusty site in 1971. Ignoring issues of ownership, they began building a new community from scratch, complete with gardens, a playing field, a recycling facility, garbage disposal and, more recently, one of the country's biggest halfpipes for skateboarders and rollerbladers. The community has enjoyed broad public support throughout its history.

Any attempts to restrict Christiania's freedoms have been met with mass demonstrations, sometimes turning violent, as was the case this past May. In opinion polls, almost three quarters of Copenhagen residents are consistently in favor of preserving the unlegislated area, while support from the community nationwide is still above 50 percent. From a formal standpoint, Christiania doesn't even exist. There are no sales contracts or lease agreements. Many if not most residents don't even pay taxes. Each adult resident is required to pay a monthly fee of 1,400 kroners (about €190) into a community till, as well as fees for heat, electricity and water. But none of these payments confers any legal rights.

Klaus Danzer, 41, was passing through Christiania 14 years ago as a journeyman carpenter when he decided to stay. Since then he has voluntarily built a number of houses for other societal dropouts, including the hostel for journeymen.

Danzer spent about €100,000 renovating an apartment for himself on the hostel's ground floor, where he lives with his wife and two daughters. Now he plans to invest even more money and time to renovate an old, dilapidated wooden house between the old city wall and moat. The building is in an idyllic waterfront location, but it also happens to be in the unlegislated area.

Copenhagen Has Plans for Christiania

If the government had its druthers, it would bulldoze the 50 or or so wooden houses in the area, as well as another 20 on "Red Sun Square," where some of the roughly 400 new apartments and condominiums planned for Christiania are to be built. The land along the one-kilometer moat is slated to become a public park.

This is part of the plan included in the government's most recent, and probably last, compromise proposal. Under the proposal, Christianians would receive the first right of refusal to rent or purchase the apartments, but nothing more. Prices would be close to the market value.

According to the plan, the future Christiania will be a combination foundation model, non-profit housing association and cooperative, with carefully devised rights of co-determination for residents. "This is more than a 50-percent victory," says Klaus Danzer, who is in favor of the proposal. "It's an historic opportunity for us to continue existing as a unit."

"We will be established, completely legally," says Nils Vest. Two-thirds of Christianians, give or take, agree with the plan.

But a two-thirds majority means next to nothing in Christiania, because life in this large commune is based on the "consensus principle," whereby decisions must be unanimous -- which is hardly likely in the current situation. But if there is one thing on which everyone can agree, it is that a decision, any decision, must be reached quickly -- that is, in the coming weeks.

"The government knows how hard it is for 650 hippie anarchists to reach a consensus," says filmmaker Vest. He has documented Christiania's history on film, including all of its political battles, victories and defeats alike.