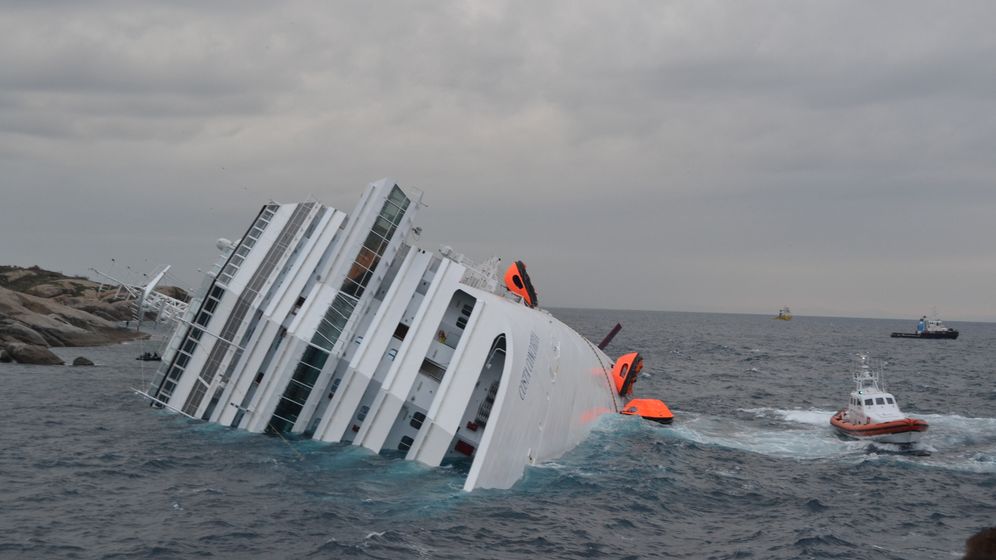 Photo Gallery: The Dangerous Tradition of Sailing Close to Shore

Last August Sergio Ortelli wrote an email in which he thanked a friend and captain with the ocean carrier Costa for passing close by the island of Giglio. Ortelli, the mayor of the tiny Italian island, praised the captain for providing an "unequalled spectacle," that had become an "indispensable tradition."

Ortelli's said these narrow sail-bys had been rewarding "the country's most beautiful island for years." But today, Ortelli's island isn't world-famous for its beauty, but for the tragedy that happened just off its coast on Friday night. The shipwrecked cruise ship Costa Concordia lies half-submerged just outside the entrance to the island's port. And mayor Ortelli has earned a new title from Italian daily Corriere della Sera: "Sindaco acchiappa navi da crociere," which translates roughly to "cruise ship magnet mayor."

"I'm no cruise ship magnet mayor," Ortelli told SPIEGEL ONLINE in his office at Giglio's port promenade. The walls are covered with old drawings of boats and a chart that details various types of vessels. Like most islanders, his life is tied to boating. Ortelli likes it when cruise ships "pass our island" -- though at a safe distance, he says. A tragedy has occurred, but "I did not ask the shipping company Costa to sail by our coast so closely," he said.

'Not a New Trend'

But the fact that after the shipwreck Ortelli claims to know nothing of the tradition is as incomprehensible as it is disingenuous. "Since I've been mayor perhaps three or four ships have come so near to the harbour," he says, meaning a distance of around 300 to 500 meters away.

"Four times in the last two and a half years? No, that's not right," counter Giglio residents. It happens often, says one barista at a harbour café, calling it "nothing special." Alessandro, the owner of a grocery store along the promenade, says it is "not a new trend." Instead, it's an old seaman's custom. "When there weren't any mobile phones yet the seafarers could greet their families this way if they lived along the coast or in a harbor," Alessandro said.

Rosalba, an islander in her 70s, agrees. "For years I've thought it was dangerous to sail so close to the coast," she said.

If Giglio's residents are to be believed, the tragedy was waiting to happen. Regardless of whether the distance was 300 or 500 meters (984 to 1,640 feet), isn't a full kilometer too close for a ship 290 meters long? It doesn't take a sailor to conclude that just a tiny unanticipated error could be disastrous.

Antonello Tievoli, Giglio native and restaurant manager and on board the Costa Concordia, knew this. According to Corriere della Sera, the captain summoned him to the command bridge shortly before the catastrophe. "Antonello, look, we're directly in front of your island," he was told. "Watch out, we're really close to the coast," the 46-year-old said. But it was already too late.

'We Will Sail Past Soon!'

According to the Il Tirreno newspaper, Tievoli called his parents on Friday afternoon and told them that he would be passing by their house on the island's west coast. "We'll be coming at about 9:30 p.m., look out the window," Corriere della Sera quoted him as saying. This was all allegedly at the instigation of the captain: "Call your family. Tell them that we will sail past them soon!"

His sister reportedly wrote on Facebook on Friday at 9:06 p.m.: "In just a little while the Concordia is going to pass really close. A big hello to my brother who will finally disembark at Savona to enjoy a bit of rest!" But Antonello Tievoli would not reach Savona. His father drove immediately to the harbor when he heard of the disaster. Beppe Tievoli searched for his son until after midnight, when he eventually found him amongst the many people who had been rescued from the ship.

"My son was shaking all over," he said on Monday. "After the shipwreck he was shaking like a church bell." Antonello has said very little, Beppe revealed some 60 hours later. "He only wants to be left in peace and to be alone with his family." He has left the island to stay with relatives on the mainland.

'In the Last Lifeboat'

Beppe Tievoli also confirmed to SPIEGEL ONLINE that it was not uncommon for cruise ships to approach the island at close quarters to greet the inhabitants with their foghorns. "It's a nice tradition, normalissima," he said -- absolutely normal. His son worked for the Costa line for more than 10 years, and had been assigned to the Costa Concordia for the last four months.

Almost every week, whenever the ship passed his home island, Antonello contacted his family to tell them what time it would happen. "When a ship is approaching the coast at 400 meters, there is usually no risk," said Beppe, a former sailor. But to sail so close to the cliffs -- it was extremely dangerous, he said.

The Costa Concordia hit rocks jutting out of the water 150 meters from the harbor. How could this happen? "Perhaps somebody made a mistake with the distance," Beppe said. "Maybe someone miscalculated." Many observers suspect that captain Fancesco Schettino did not misjudge the distance, but rather deliberately approached just 150 meters from the coast. The prosecutor is set to question Tievoli shortly.

His father has vehemently denied that his son might be responsible. "Someone made a mistake," he said, but insisted that Antonello was one of the last to leave the stricken ship. "He was in the last lifeboat to arrive here in the harbor." Unlike the captain, who was allegedly already sitting in a lifeboat before midnight, Tievoli remained on board to help the passengers.

At least on this point, Antonello Tievoli should have no feelings of guilt, his father said. When it comes to the mayor, however, the islanders are not so sure. "Ortelli will have a reason for telling his version of the greeting maneuvers of the cruise ships," said one local resident who wanted to remain anonymous. "This is politics."

As a politician, Ortelli will have a lot to do in the coming weeks. The Tyrrhenian Sea around his island is regarded as one of the best scuba diving destinations in Europe. "The biggest disaster in Friday's shipwreck is those who died," said Ortelli, and he of course will make every effort to help find those still missing. But he is understandably also worried about his island.

A crisis management team, being led with zeal by the mayor, is now seeking to avoid an environmental disaster. "We must prevent diesel oil from leaking," said Ortelli, something which could well happen if the wreck continues to move. On Monday, the ship was already slipping deeper into the sea.