SPIEGEL ONLINE: The conditions imposed by the international donors contributing to the bailout stripped Cyprus of a substantial part of its sovereignty. Are you still taken seriously as a foreign minister?

Kasoulides: It depends on what sort of political message you portray and whether what you say seems to be valid and serious among your partners. I do not feel like someone representing a country with limited sovereignty. From the foreign policy point of view, I feel liberated to speak my mind without any other consideration, because there is very little to lose.

SPIEGEL ONLINE: The Turkish government is pushing for the immediate start of talks on a solution to the Cyprus conflict. Is an agreement imminent?

Kasoulides: This is an effort to take advantage of the weak economic situation in Cyprus, as well as in Greece, in order to get a settlement closer to Turkish terms. But we cannot deal primarily with this question as long as the economic problems of the Greek Cypriots are not faced. The economic problems require the full attention of our government, and Turkey should have shown an understanding for our situation before calling for a resumption of talks.

SPIEGEL ONLINE: Do you fear a fiasco like that of 2004, when a vast majority of the Greek Cypriots voted against the plan by then-United Nations Secretary General Kofi Annan to resolve the conflict?

Kasoulides: Our credentials from the past are well-known. President Nicos Anastasiades then supported the Annan plan against a lot of resistance. The Annan plan is over. We cannot afford to fail again. No government in Cyprus can succeed in agreeing to a settlement without having the public opinion on its side. So we are in favor of talks, but they need to be prepared well.

Kasoulides: Preparation starts with the analysis that the previous method of negotiations has not delivered the desired results. One of the reasons is that everybody pretends that the issue is just a difference between the two communities in Cyprus. But it is obvious that the differences lie between Turkey and Cyprus. So, there should be a way to involve Turkey in these efforts. Of course, the talks should be officially conducted between the representatives of the two communities and under the auspices of the UN secretary general, but somewhere one should be able to talk to Turkey and listen to Turkey. A second condition for talks is to create the right climate.

SPIEGEL ONLINE: What trust-building measures do you recommend?

Kasoulides: We are suggesting two things: Since the accession of Cyprus to the European Union, Turkey has blocked the political dialogue between the EU and NATO as well as Cyprus' membership in various international organizations. That is why we have been against any closer military cooperation between Turkey and the EU. If Turkey stops blocking the Republic of Cyprus from joining NATO's Partnership for Peace program, then we will offer to lift our objection to an administrative agreement between Turkey and the European Defense Agency. We are also ready to put on the table certain chapters of the accession negotiations between Turkey and the EU that have so far been blocked by Cyprus.

SPIEGEL ONLINE: And what would that mean in concrete terms for the people of both sides of the island?

Kasoulides: We are suggesting the following: We would allow the Turkish Cypriots to trade directly with EU countries under the custom supervision of the EU from the port of Famagusta. In return, the city of Varosha would be given back to us by the Turkish side. Such a package would improve the climate tremendously. Such a gesture would strengthen our president so that he could enter into negotiations and be able to deliver.

SPIEGEL ONLINE: One of the biggest foreign policy tragedies is happening less than 100 kilometers (62 miles) away from Cyprus. Around 70,000 people have already been killed in the civil war in Syria. Is the European Union making the right decisions?

Kasoulides: No, I do not think so. The time has come for the EU to take bold decisions about the most practical way to end the hostilities and the massive loss of lives. There are so many refugees that they overburden countries like Jordan or Turkey, and they create very serious problems in Lebanon. So the big question we need to ask is how we can achieve a political solution through dialogue. Is this possible with the situation on the ground being what it is? What changes, in terms of the strength of both sides, is needed in order to lead both to the negotiating table?

SPIEGEL ONLINE: You don't sound very optimistic that a political solution can still be reached.

Kasoulides: At the moment, we are concentrating on the humanitarian issue on the one hand, which is right, and on the efforts for a political solution on the other. The questions I just mentioned must be asked, and we must make sure that sticking to efforts to find a political solution, without changes on the equilibrium on the ground, is realistic.

SPIEGEL ONLINE: France and Great Britain are pressing for arms deliveries to the Syrian rebels. Do you support this?

Kasoulides: I see the merits of that position and I think that the EU should examine very seriously what they are proposing. At the same time, we should undertake diplomatic activity to warn that this may happen soon. Iran should be convinced to stop supporting one side, because such support makes the chances for a political solution at least corresponding to the aspirations of the Syrian people more remote. Otherwise the other side will need to be supported as well. 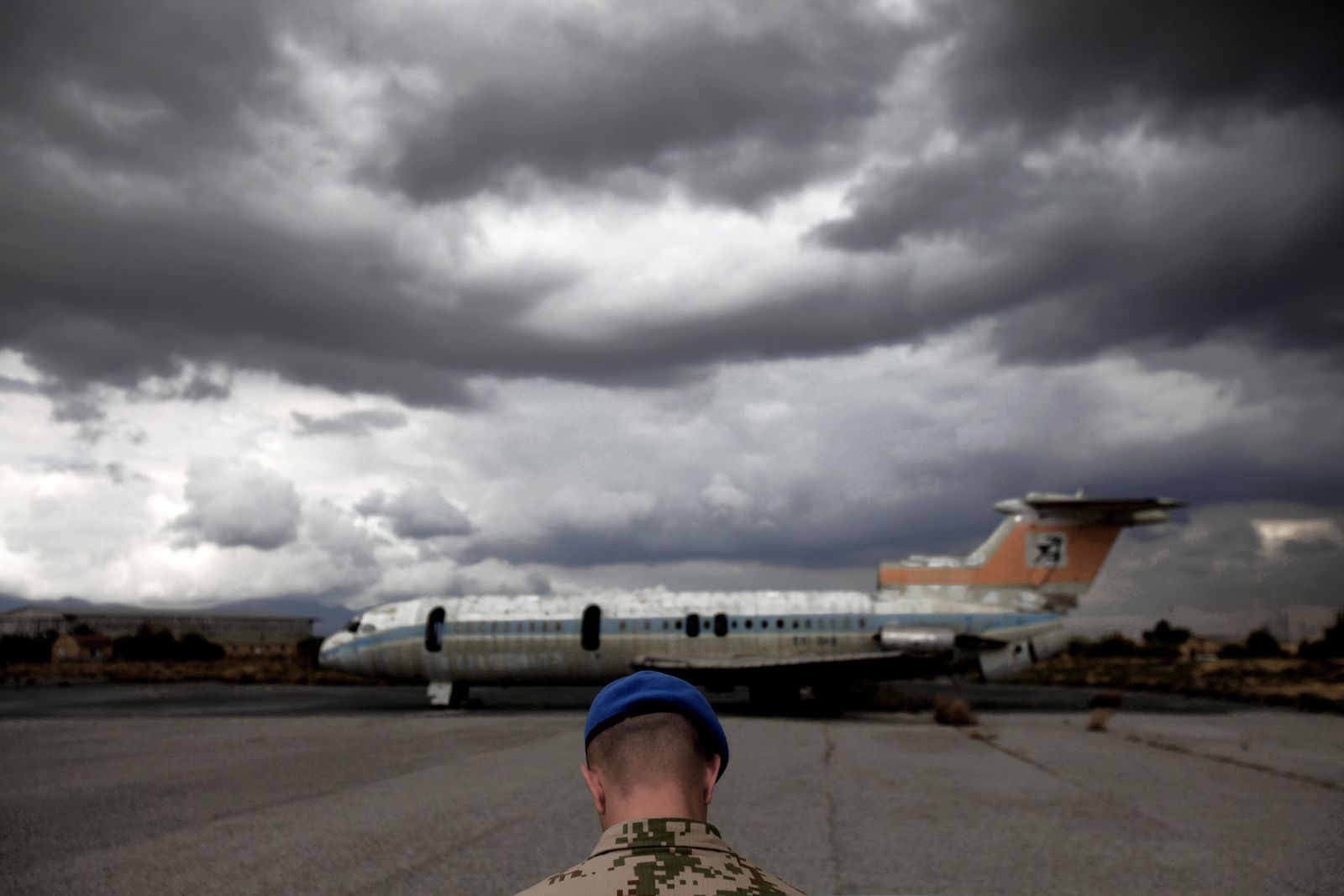 A UN soldier stands in front of a destroyed Cyprus airways plane at the war-torn buffer zone at the abandoned Nicosia airport in the divided capital.