In the negotiations over a bailout for crisis-plagued Cyprus, the German government is reportedly pushing for mandatory participation by banks and their customers in a bailout that might also hit wealthy Russians. The highly controversial move might make it easier for German Chancellor Angela Merkel to push approval for an aid package through parliament, where she is not currently ensured of a majority.

Both Handelsblatt and the Süddeutsche Zeitung newspapers on Friday cite anonymous sources familiar with the negotiations claiming consideration is being given to calls for some of the banks' outstanding debts to be converted into holdings in those financial institutions.

The most radical option would be to directly tap money that has been deposited in the country's bank accounts, including that of wealthy Russians. Handelsblatt is reporting that officials at the European Commission in Brussels are divided over the suggestion of a so-called "bail-in," with many viewing it skeptically. Some are concerned the dramatic step could shake financial-market trust in the euro zone and drive investors away from crisis-plagued countries. Nevertheless, it reported, a debate on the issue is underway.

Cyprus urgently needs €17.5 billion ($23.1 billion) in order to stabilize its financial sector and its government finances. Given the country's status as a tax paradise, especially for rich Russians, potential donors have shied away from providing swift aid. With federal elections slated for this autumn, the German government also isn't in any rush to put the aid package up for a vote in parliament.

With bailout packages unpopular within her own government coalition, Chancellor Angela Merkel may have to rely on opposition votes to pass any bailout. This backing is unlikely to happen without concessions, the main one being a demand by the center-left Social Democratic Party that Cyprus abandon the kind of loose tax policies that have made it a haven for foreign investors. At 10 percent, Cyprus has the lowest corporate tax rate within the euro zone, much lower than in countries like Germany and France, where it is 29 percent and 33 percent respectively. Germany has repeatedly pressured Cyprus to increase its corporate tax.

Money laundering is also thought to be a major problem, and it is believed that Russians have deposited billions in assets on the island from dubious sources.

In addition, the newspapers reported, the countries that would provide the bailout are concerned it will create another problem. In the event of an aid package totalling €17.5 billion, the Cypriot deficit would rise to 140 percent of gross domestic product, well above the 120 percent that is considered serviceable. This has prompted the International Monetary Fund (IMF) to push for participation by owners and creditors of the banks in order to reduce the size of the total bailout. But this option could also open the door to legal disputes in the countries whose depositors are affected.

The sources in Brussels said that the euro-zone also has to take into consideration the financial stability of the currency area. One possible way of addressing a bail-in could also be to ensure that the deposits of Cypriots would not be touched -- and that only those of foreign depositors would be part of the debt haircut. Although that would address concerns about Russian money laundering, it could also provoke Moscow at a time when the euro-zone members are encouraging Russia to participate in the Cyprus bailout.

According to sources cited by Süddeutsche, "more elegant" solutions are also being considered, including tax hikes. Higher taxes for corporations, capital yields, property as well as a wealth tax are all being considered.

Considerations over a possible wealth tax would mean that rich Cypriot citizens would also be forced to participate in the bailout. Recently, the European Central Bank, together with the 17 central banks of euro-zone member states, conducted an as-yet unpublished study showing that per-capita wealth in Cyprus is among the highest in the euro-zone, ahead of Germany, France and Italy.

Action on the Cyprus bailout is expected soon. The country goes to the polls for a run-off vote this Sunday in its presidential election, and officials with the troika, comprised of the European Union, the European Central Bank and the IMF, are hoping to commence talks swiftly with the new government in the hope of reaching a decision by the end of March. 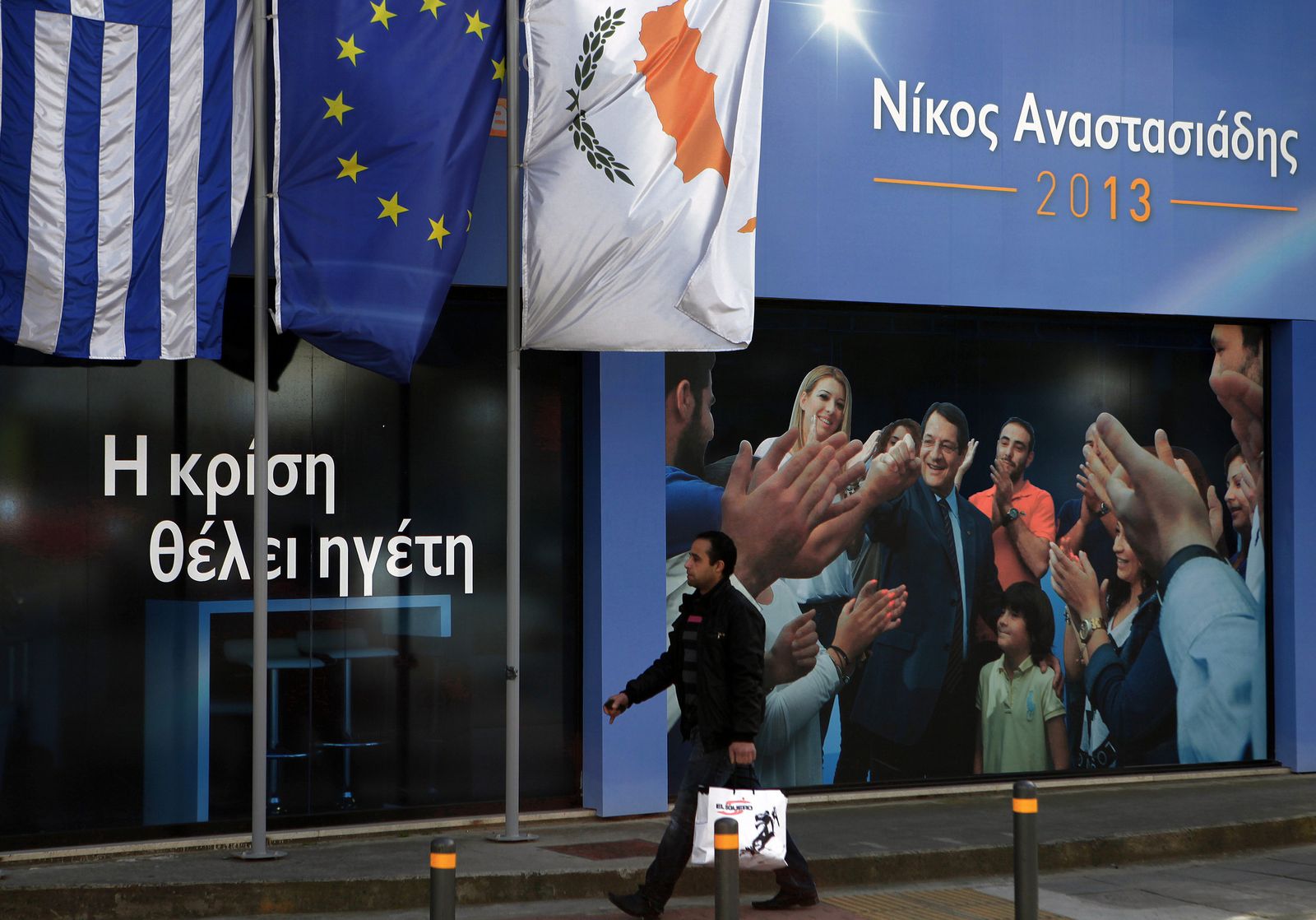 The election campaign in Nicosia: Rich Cypriots and Russians may soon be forced to assist in the country's planned bailout.