Efforts to save the euro have long been criticized for being undemocratic, with bailout packages being assembled behind closed doors in Brussels. But after Tuesday evening's vote in the Cypriot parliament, that critique will be difficult to maintain. Not a single parliamentarian in Nicosia cast a vote in favor of the bailout package, one which foresaw a mandatory levy on accounts held with Cypriot banks.

Thirty-six lawmakers voted against the deal and 19 abstained, including those belonging to President Nikos Anastasiades' center-right DISY party. With their veto of the expropriation plan, parliamentarians in the island nation showed that representatives of a small European Union member state can indeed block euro-zone efforts to save the common currency.

Anastasiades, of course, didn't exert much effort to find a majority for the deal, even though he had agreed to it in Brussels. On the contrary, even before the parliamentary debate began, he said the package was unlikely to pass -- a virtual invitation to lawmakers to reject it. The move could even be a tactical one. Anastasiades can now return to Brussels in the hopes of leveraging better conditions out of Cyprus' euro-zone partners by highlighting his country's rebellious parliament.

It could also be useful as a lever in Moscow. On Wednesday morning, all eyes were on Russia in the hopes that the country might jump in to provide Nicosia emergency aid. Russian investors have parked billions of euros in Cypriot bank accounts -- indeed the presence of Russian money is one reason why Cyprus' banking sector holds assets worth more than seven times the country's annual gross domestic product. According to media reports, Anastasiades spoke with Russian President Vladimir Putin immediately following the failed parliamentary vote and the Cypriot finance minister flew to Moscow on Tuesday night.

In the coming negotiations, the Euro Group must be careful as it seeks to maintain its credibility. The vote on Tuesday evening made one thing clear: The main concern in Nicosia was not in fact those who held smaller sums in Cypriot accounts. By Tuesday morning, the original deal had been changed to exempt from the bank levy those holding less than €20,000 in their savings accounts. That the parliamentary veto was nonetheless unanimous shows that lawmakers are primarily interested in maintaining Cyprus' role as a low-tax paradise and offshore business haven. It also shows that Cypriots are unwilling to be bullied from abroad, particularly not by the Germans.

The facts of the case would seem to belie the intense emotions it has triggered. Two large Cypriot banks have run into difficulties and Nicosia is unwilling to liquidate them or allow them to enter into insolvency because that could fatally harm other banks in the country and destroy the country's reputation as a financial center for the foreseeable future. But bailing the banks out is beyond the means of the government, which is why Cyprus needs billions in aid money from the European Stability Mechanism (ESM), the euro-zone's permanent bailout fund. The euro-zone, led by Germany, came up with a not unreasonable demand in exchange for assistance: Namely that the bank customers, whose accounts are to be saved, contribute to the bailout.

Nicosia's refusal, however, has now escalated the bailout from a question of policy to a question of principle. The sums involved, after all, are relatively small in comparison to the past needs of other nations-in-crisis. The Cyprus package called for €10 billion from the ESM and a further €5.8 billion to be raised by the account levy. But were the euro zone to now back away from that levy demand it would be clear to all that the common currency union could be blackmailed.

If, after all, one of the smallest euro-zone members can claim to be systemically relevant -- and if that state is allowed to block efforts to tap into other possible sources aid money before European taxpayers are forced to fund the entire bailout -- then all countries that run into trouble in the future will refuse to budge in negotiations with Brussels.

What About European Taxpayers?

And there will be future negotiations. Banks in Spain too are in need of bailout money from the ESM. The key sticking points are similar to those in Cyprus: Should some banks be liquidated and how heavily should investors and creditors be involved in the bailout?

This week, it has repeatedly been said that the euro zone must be careful not to erode the trust of the financial markets in the common currency. But the trust of European taxpayers in their leaders is likewise precarious. And it will be endangered if the impression is once again given that taxpayers alone must bear the risks associated with propping up the common currency.

What, then, will happen next in Cyprus? Time is of the essence. Banks in the country can't stay closed forever, and should they open before a clear path forward has been established then a run is practically a certainty. And a bank run could be the coup de grace for the country's financial system.

The rapid turn toward Russia on Tuesday night makes it clear that Cyprus is quickly pursuing a potentially promising Plan B. Because many rich Russians have long used Cyprus as a low-tax locale to park their money, it is hoped that Moscow might spring for the €5.8 billion in bailout money left open by Tuesday evening's parliamentary rejection. According to media reports, the Cypriot government is attempting to strike a quick natural gas deal with Russia, granting Moscow concession rights to the large natural gas reserves that lie off the coast of Cyprus in exchange for much-needed cash.

The Euro Group would only be able to accept such a compromise if the money from Russia did not come in the form of a loan. That, after all, would increase Cpyriot sovereign debt to an unsustainable level -- exactly what the first deal was trying to avoid.

The alternative would be for Cyprus to allow the European deal to fall apart completely, eschew the €10 billion from the ESM and try to find the €17 billion it needs from elsewhere. Here, too, Russia would be the primary hope.

What, though, if Russia refuses to bail the country out and Nicosia can find no other partners willing to help? Then the Cyprus situation would turn into a game of chicken: Who is more afraid of a Cypriot insolvency? Cyprus itself or the rest of the common currency area? Brussels, after all, is concerned that if Cyprus is allowed to fall, it could lead to a resumption of capital flight from other struggling euro-zone countries and rapidly spiralling sovereign bond rates for Italy and Spain.

One thing, though, is clear. If the euro zone blinks in its game of chicken with mini-member Cyprus, it will be forfeiting many future duels as well. 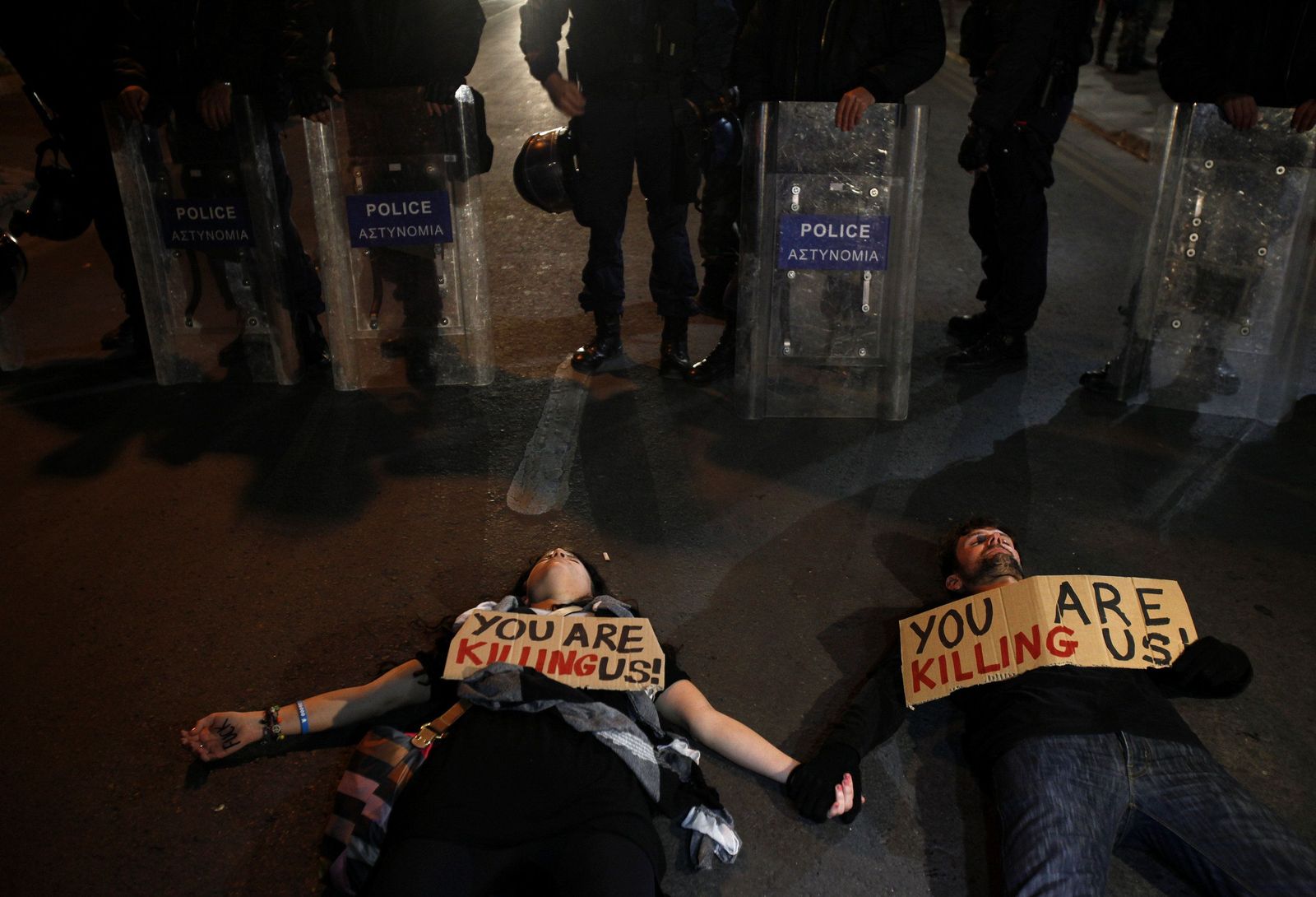