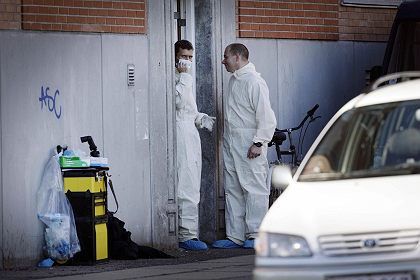 Danish police looking for evidence after a raid resulted in the arrests of eight suspected terrorists.

Danish police on Tuesday say they have foiled a possible terror attack on the nation's capital Copenhagen. Members of Denmark's intelligence agency PET took into custody eight Islamic militants believed to have links to the terrorist group al-Qaida. The arrests were made in separate raids at 2 a.m. following an extended surveillance operation.

According to PET head Jakob Sharf, six of the suspects are Danish citizens. "With the arrests, we have prevented a terror attack," Sharf told reporters. "Those arrested are militant Islamists with a connection to a leading al-Qaida person."

The suspects are of Afghan, Pakistani, Somalian and Turkish origin and range in age from 19 to 29. Sharf said they were "producing an unstable explosive in a densely populated area" and that authorities had waited until they had gathered enough evidence before moving forward with the detentions.

In all, 11 places were raided in the early morning hours, but it is unclear whether Danish police are looking for more suspects. A man who lives in one of the raided buildings told Danish television that his building was evacuated during the raid, according to The Associated Press.

Since 2005, Danish police have staged three such raids against suspected terrorist networks. The trial of four men taken in one of those operations and suspected of plotting to attack a target in Europe begins on Wednesday in Copenhagen.

Denmark withdrew 460 soldiers from Iraq in June, leaving behind only a handful of personnel connected to the air force.