Yahya Hassan has only written one volume of poetry. It's modern, free verse stuff that doesn't rhyme, the kind of thing that usually no one reads. Yet these days when Yahya Hassan enters a room, even one at the publishing house that printed his poetry, first he has to wait for his two bodyguards to check the place out: Okay, no attackers here, you can go in.

Hassan is 18 years old. His self-titled book "Yahya Hassan" sold over 100,000 copies in Denmark within the space of just a few months. It also earned him over 30 serious death threats. Hassan, whose book is also being released in German translation and who is expected to make an appearance at the Leipzig Book Fair this week, lives in Copenhagen and is a Danish citizen, even if his name doesn't sound like a typical Danish one. He's not a big fan of the Danish government, though.

But that's not the reason for the death threats.

This teenaged poet has broken the law of silence within his family and expressed criticism of his father, who beat him and the rest of his family. Hassan's poetry describes how he sees his background -- backwards, hypocritical and blinded by religion. In short, he's saying exactly the things that xenophobic critics of Islam often do. That, at least, is the accusation against him.

Then there's the fact that all this is taking place in Denmark, a country that was rocked by controversy over cartoons of the Prophet Muhammad a few years ago. No wonder there's been such a strong reaction -- 100,000 books sold in tiny Denmark would be proportionately equivalent in Germany to at least 1 million copies.

Poems with the Force of a Fist

Hassan enters the room at the publishing house with the hood of his sweatshirt pulled down low. He takes a quick look around, gives a shy greeting, then sets his beer -- it's 1 p.m. -- and a pack of Prince cigarettes on the table.

There's a small tattoo on his right hand, three letters: "ord," Danish for "word." That is Hassan's work in a nutshell -- the power of words. His poems have hit Denmark with the force of a fist.

The book opens with a poem titled "Childhood," which describes Hassan's father's brutality. The breathlessness of these lines sets a rhythm that continues through the following 75 poems.

Together, the poems tell the story of a boy whose family comes to Denmark from a refugee camp in Lebanon, a family with an overwhelmed and violent father, who's a good Muslim at the mosque and a brutal man at home. He beats his children and his wife, and when she eventually leaves him, he arranges for a new wife to be sent to him from Tunisia, a "new headscarf," as Hassan contemptuously writes.

It is Hassan's own story. Like the first-person narrator of his poems, Hassan dropped out of school and ended up living in various institutional homes. In the book, he starts committing small burglaries with his buddies and doing low-level dealing -- until a teacher notices his writing talent and starts to encourage him.

The language of his poems is highly precise. The controversy over the book is not a question of how Hassan writes -- his literary merit is uncontested. It's a question of what he writes.

It was a newspaper interview that turned the book "Yahya Hassan," which hit the market with a first edition of just 800 copies, into a sensation. "I'm so fucking angry at my parents' generation!" was the headline of the interview, which ran in the left-wing Danish newspaper Politiken ahead of the book's publication. In it, Hassan accused his parents' generation of hypocrisy, a lack of interest in their own children and religious fanaticism. When he repeated his views on a TV program, he started receiving the first death threats.

The uproar around Yahya Hassan must be understood in the context of the controversy over the cartoons of the Prophet Muhammad published by a Danish newspaper in 2005. Then, too, the cartoons and the subsequent backlash against them raised such questions as: Is it acceptable to insult Islam? To provide deliberate provocation, in order to present the ensuing reaction as proof of Muslim immigrants' backwardness? As a result of the controversy, an attacker broke into the home of cartoonist Kurt Westergaard with an axe.

Westergaard is an older white man, while Hassan is a young poet from an immigrant neighborhood, but in many ways there are parallels between the two situations. In both cases, the public outcry concerns criticism of religion, integration issues and questions of who is allowed to say what and how -- the big questions that concern all Western European countries with an influx of immigrants.

Jes Stein Pedersen, 54 and gray-haired, is the literary editor at Politiken, which belongs to the same media group as Jyllands-Posten, the newspaper that published the Muhammad cartoons in 2005. To this day, Stein Pedersen has to go through three different security checkpoints to get into the building and to his desk. Like all Politiken employees, each month he receives a security report informing him of the building's current threat level. Sometimes it's "very high," sometimes just "high," but never "low." In September 2010, an Islamist group was arrested that had been preparing to attack the newspaper's office in Copenhagen.

Stein Pedersen is the one who organized this event with Hassan in the large hall that makes up the publishing house's basement. He has also defended the poet in numerous articles. Hassan's poems are a "liberation" for him, Stein Pedersen says -- finally the tunnel of fear in which the Danish public has lived since the Muhammad cartoons has found an end, and finally some is speaking in a credible way about himself, rather in the name of some idea.

But especially among the left-wing, Stein Pedersen says, Hassan is controversial. "The rules of political correctness make it so that precisely those people the rules should be protecting end up shut out by them and forced into silence. That's not right," he says.

Denmark is an unusual country. The great tragedies of the 20th century for the most part passed the country by without leaving much of a trace. Denmark had lost its empire before then, anyway -- Norway once belonged to Denmark, as did Iceland and part of what is now northern Germany. The country didn't participate in World War I; it was occupied by Nazi Germany during World War II and had its great moment when it was able to prevent the deportation of most of its Jewish population.

Denmark is a member of the European Union not out of any great enthusiasm for Europe, but because membership serves it well. Denmark doesn't use the euro, instead retaining its own currency, the crown. In comparison with Germany, immigration from Islamic countries to Denmark started fairly late, in the 1980s. The right-wing populist Danish People's Party has held seats in parliament since the late 1990s. Still, few others in Europe have come out of the 20th century in as good shape as the Danes.

The controversy over the Muhammad cartoons, though, showed the country just how close to home the world and its problems had come. Suddenly a couple of seemingly insignificant drawings led to violent protests, Danish flags being burned in capital cities of Arab countries and over 100 deaths.

Fast forward a few years, and now there's a young man knocking against the invisible walls of Denmark's bubble, a boy who may not look like most Danish people, but writes the language better than most Danes, and who tells stories from this country that strike some ears as sounding like something told by a right-wing extremist.

'What I Write, That's My Identity'

In poems such as "A Radius of 100 Meters," Hassan provides a depressing panorama view of a few thousand square meters of ghetto life, describing his father's violence as well as his social security fraud.

No wonder, then, that the Danish right-wing would like to love Hassan. But what exactly would they do with this young man who doesn't actually like Denmark? "I got beat up in the institutional homes of the Danish welfare state," he says. "Horrible things happened there. This country has no interest in making it possible for people like me to get an education."

And Hassan himself has no interest in speaking for anyone but himself. His poems almost never generalize. They concern precisely rendered individual characters and their actions. They are about his family and not an entire generation.

"What I write, that's my identity, that's who I am," Hassan says. "But that doesn't mean I am the way my readers think I am. The reading depends on the individual reader, the reader's reality. I'm not responsible for the interpretation."

Last fall, Hassan was attacked at Copenhagen's central train station by a man known to the police as a militant Islamist. Train station officials came to Hassan's aid. He later wrote a poem about the attack that was published on the opinion page of Politiken.

When the case against the attacker went to court, the defense wanted to submit the poem as evidence. Hassan denied that the poem had an author. Poems, he said, are not evidence. Not of his life and not in court. Poems are art, and should be treated as such.

From Rap to Poetry

Yahya Hassan is only 18, but it seems no other angry young man in the Western world since American rapper Eminem has played so skillfully with the expectations of his fans and detractors alike.

Hassan got his start in rap, in fact, which he first learned in a government-funded hip-hop workshop, but he quickly grew bored, feeling constricted by the rules of the genre. That rap influence, though, still shimmers through in the rhythm of his poems.

Hip-hop, though, is all too often about insulting one another's mothers, not addressing one's own family as Hassan does in his poetry.

"That's not something I can answer," Hassan says to the question of what his family has to say about his poems. "It was the same when I was writing them, I couldn't stop and be considerate. What if I had asked my sister, should really write the opening of the book that way? And what if she'd said, no, don't write about the beatings we got? The book wouldn't have been even 10 pages long."

Hassan seems to be Europe's last Romantic poet -- betraying his country, his family and his friends for the sake of truth in art, animated by his love for his language, Danish. Hassan is something of a hero, and something of a pop star, the downfall of his book's protagonist transformed into the ascent of its author.

Yet despite all that, Hassan sits in his publisher's meeting room looking like a lost young boy.

It's a fairly lonely life he leads in Copenhagen, this city he's conquered with his words. The people he's in closest contact with, day to day, are his two bodyguards. "In the past, I met these kinds of guys in the institutional homes and in prison," he says. "Now they're the ones who have to protect me."

Hassan has an unusual gaze. Sometimes he peers out from under his hood like a kid for whom everything's gotten to be a bit too much. Other times, his gaze seems to say, Up yours, all of you. 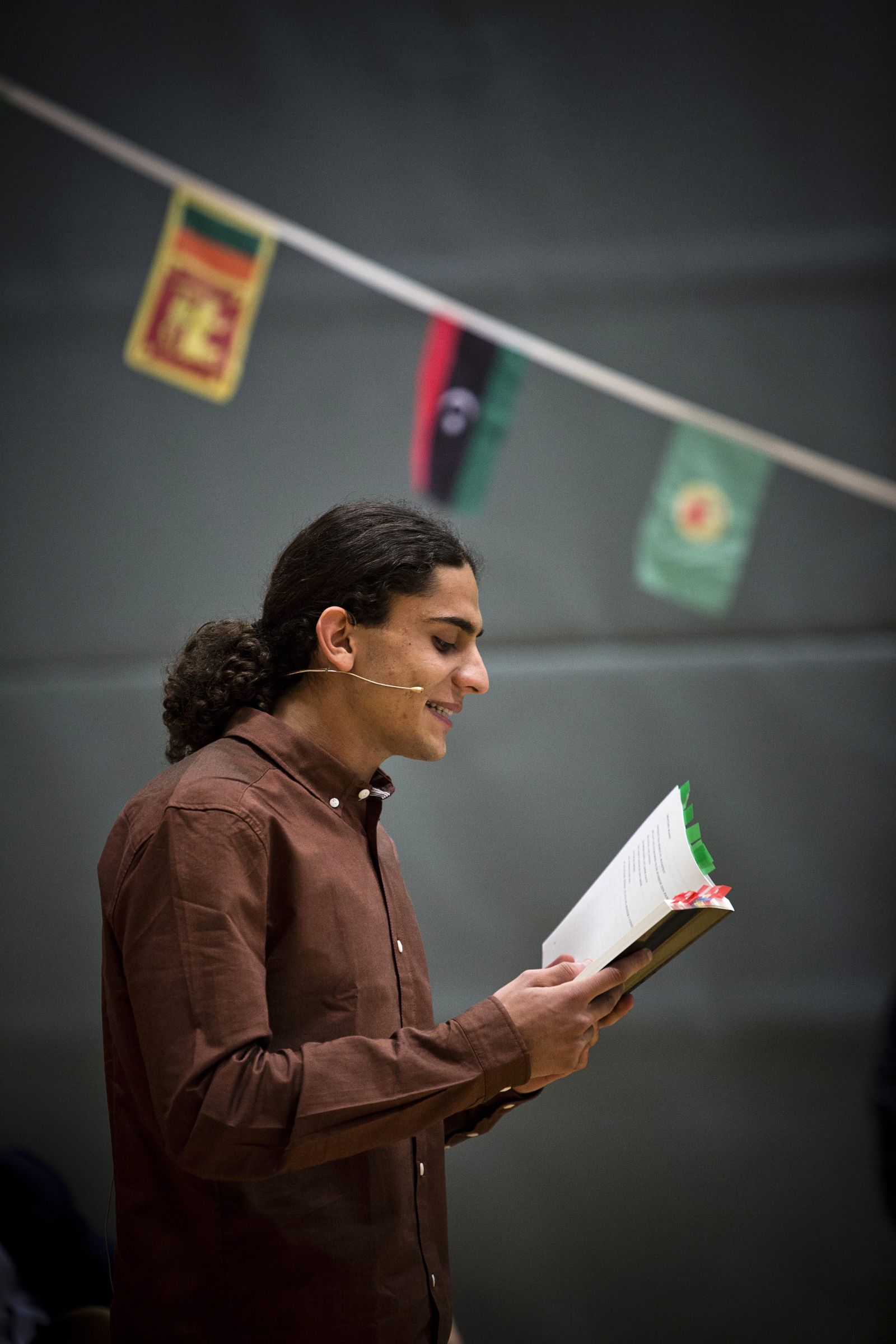