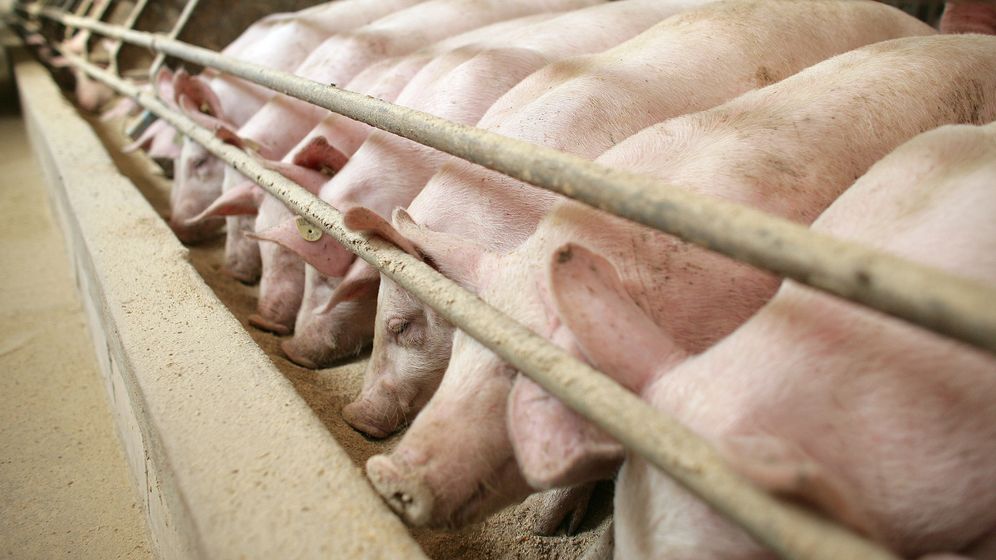 Photo Gallery: Cracking Down on Antibiotic Use at Danish Pig Farms

Before Michael Nielsen goes into his barn, he first strips down to just his T-shirt, socks and underwear, pulls on a white jumpsuit and rubber shoes, and scrubs his hands with disinfectant. Only then does he check on his pigs.

Nielsen has 650 sows on his farm near Copenhagen, and he plans to increase that number to 850 soon. With each sow bearing up to 30 piglets a year, the Danish farmer will then have over 25,000 pigs, give or take.

"We check on every single one of the animals, every day," Nielsen says. That's because in the kind of intensive livestock farming he practices, illnesses are unavoidable. Piglets catch diarrhea and coughs from one another, and the older pigs acquire bites and scratches in fights. Sows get infections if the farmer has to intervene in a birth, and bored young pigs bite each other's tails until they're bloody.

In such cases, Nielsen takes up his syringe and administers Duoprim for diarrhea, Streptocillin for infections. But only if more than a quarter of the pigs in one barn have diarrhea does Nielsen treat the whole herd at once by mixing antibiotics into their drinking water. If he doesn't, he says, there's too great a risk the pigs could end up all contracting the infection.

Unlike his counterparts in Germany, Nielsen is required to report every single treatment he administers. Denmark monitors the use of antibiotics in agriculture more rigorously than almost any other country, in response to concerns over drug-resistant microbes.

The Approach of a Post-Antibiotic Era

Each use of antibiotics creates more bacteria with genetic resistance to antimicrobial agents, eventually resulting in drug-resistant "killer bugs" that can make a lung infection, for example, life threatening for humans as well.

"The more antibiotics we use today, the less chance we'll still have effective antibiotics tomorrow," warns Steven Solomon from the Centers for Disease Control and Prevention (CDC) in the US. Already, the World Health Organization (WHO) and the CDC estimate that each year over 40,000 people in the European Union and the United States die of infections caused by multi-resistant microbes. Epidemiologists predict a coming "post-antibiotic era."

Scientists believe part of the responsibility lies with farmers' careless overuse of these drugs. Doctors, too, overprescribe antibiotics for human patients, but experts estimate that twice as many antibiotics are now prescribed to healthy animals as to sick humans. "I think we have this the wrong way round," says England's Chief Medical Officer Sally Davies. "Epidemiologists don't need to prove that using antibiotics for livestock poses a danger. The vets need to prove why they need so many antibiotics."

WHO Director-General Margaret Chan likewise criticizes a powerful lobby she says wants to "prevent regulation of any kind." Just one country, Denmark, is a "pioneer in its handling of this problem," Chan says.

Denmark first slammed on the brakes and began strictly regulating the use of antibiotics 20 years ago. If farmers' usage increases despite these regulations, they face sanctions. In Germany, on the other hand, until recently there was no data on the amount of antibiotics used in agriculture. And analysis broken down by species or by individual farm, as is available in Denmark, doesn't exist in Germany.

Germany 'Lagging Behind Other Countries'

Not until September of last year were figures on German antibiotics usage in agriculture published. According to data collected by the Federal Office of Consumer Protection and Food Safety, in 2011 pharmaceutical companies supplied German veterinarians with a staggering 1,734 tons of antimicrobial agents. Only around 800 tons were used in human medicine during the same time period.

In October, the European Medicines Agency (EMA) published a study comparing the use of antibiotics in veterinary medicine in 25 European countries. The differences are considerable. In 2011, German livestock farmers administered an average of 211 milligrams of these agents per kilogram of "biomass treated." Only Spanish, Italian and Cypriot famers used more. The frugal Danes, in contrast, got by with just 43 milligrams.

"We've taken the easy route for too long," admits Thomas Blaha, a professor of epidemiology at the University of Veterinary Medicine Hanover (TiHo). "Now we're lagging behind other countries."

Every injection farmer Nielsen gives his pigs is recorded in a centralized register run by the Danish Integrated Antimicrobial Resistance Monitoring and Research Program (DANMAP). If his usage were to exceed a certain limit, he would receive a letter from the organization, a so-called "yellow card," and have to pay a fine. In the worst-case scenario, authorities could force him to reduce the number of animals on his farm. And anyone would be able to read online that Nielsen from Slangerup had administered too many drugs to his livestock.

And so the farmer does everything he can to make sure that doesn't happen. His use of antibiotics, Nielsen says, is below the national average.

Nielsen and his five employees always start their daily rounds through the halls of his 5,000-square-meter (54,000-square-foot) facility with the youngest animals, so they don't introduce germs from the older pigs to the younger ones. The piglets in the first of Nielsen's 26 barns are just 12 days old. Some are suckling at their mothers' teats, while others snuggle together in the red glow of the heat lamps.

A couple of doors further on, piglets tussle over toys dangling from the ceiling. In another room, newly inseminated sows lounge in the straw, smacking their lips. The older animals bear ear markers that are recognized by the dispensing station of the farm's automatic feeding system. For each hungry animal, an individual feed mix spills into the trough. And the farmer can check on his computer whether any of the animals has skipped a meal, since lack of appetite can be a sign of infection.

When Nielsen wants to refill the small medical refrigerator in the feeding room, his veterinarian issues the prescription. But to fill that prescription, the farmer has to go to the pharmacy. This procedure was revolutionary for veterinarians. Until 1994, vets were allowed to sell medications too, earning good money with the sale of drugs they themselves had prescribed.

This dispensing permission, now abolished in Denmark, is still in effect in Germany, where antibiotics account for 20 percent of sales at some veterinary practices. "Saying this doesn't exactly endear me to my European colleagues," says Jan Dahl, a veterinarian with the Danish Agricultural and Food Council, "but Danish veterinarians make their living from their medical expertise, not from the drugs they sell."

Since 2000, administering antibiotics to healthy animals for the purpose of making them grow faster has also been prohibited in Denmark. The EU as a whole didn't follow with a ban on such "growth enhancers" until six years later. And in the US and Asia, farmers continue to pump piglets full of antimicrobial agents. "They look like sausages on four legs," says Nielsen, whose own piglets tend to look bonier. "But that's not meat I would want to eat."

Additionally, Danish veterinarians don't use the types of antibiotics that are important in human medicine -- third- and fourth-generation fluoroquinolones and cephalosporins.

Thanks to all these measures, Denmark's usage of antimicrobial agents is around 60 percent less than it was in the mid-1990s, and there are plans to reduce it further still. Currently in the works is a method that will make it possible to accurately determine whether antibiotics are needed at all. Jens Peter Nielsen, a veterinary science professor at Copenhagen University, has developed a cotton sock that farmers can pull over their shoes before they wade through the pig manure in their barns. They then send the manure-drenched sock to a laboratory for testing. Only if the pathogenic bacteria count found there exceeds a certain level are antibiotics recommended.

Germany doesn't have such limits in place. There are plans, though, to start keeping closer track of usage here, when Amendment 16 of Germany's Medicinal Products Act comes into effect on April 1, 2014. However, the amendment does little to establish concrete goals for reducing usage or sanctions for farmers who are too free in their application of antibiotics.

At the core of the reform is a database that will record every instance of antibiotics use by every individual farmer. This, too, is urgently needed, as a monitoring system established in 2011 by a company called QS GmbH shows. The company's database, VetProof, contains information on the antibiotics use of most pork and poultry producers in Germany.

Epidemiologist Thomas Blaha at TiHo recently analyzed a first set of data. His conclusion: "Around 20 percent of our livestock farmers use 80 percent of the antibiotics. There are farmers using up to 100 times as much per animal as their neighbors, who are raising the same animals in the same region."

Just pinpointing these "high users" and providing advice targeted specifically to them would be a huge step forward, Blaha believes. "There are farmers who treat the entire herd as soon as one pig develops a cough," he says. "Others place sick animals in a separate pen and give the drugs only to them."

Then there are farmers who compensate for the poor conditions in which they keep their livestock by pumping the animals full of drugs, says Theodor Mantel, president of Germany's Federal Chamber of Veterinarians. Installing a new ventilation system or completely rebuilding a barn to make it more modern is more expensive than buying a couple bottles of these problematic antibiotics.

Michael Nielsen, the Danish farmer, built his ultramodern facility in the late 1990s. His pigs have 30 percent more space than stipulated by law and the piglets remain with their mothers longer than required.

"I wanted to build barns that would comply with future laws as well," he explains, proudly reaching in to pick up a piglet from one of his pens. The piglet squeals indignantly, and manure of a rather liquid consistency splashes onto Nielsen's white jumpsuit. "Oh," he jokes. "Guess I'll need to treat that after all."