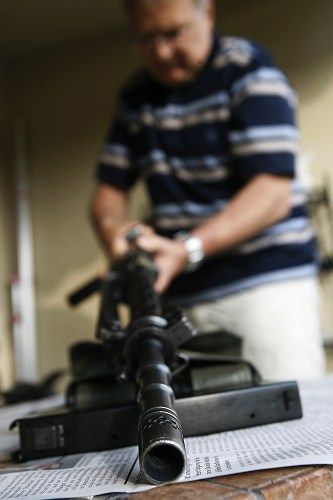 A Swiss man checks his personal army rifle at his house in the village of Luetzelflueh near Bern. Switzerland has one of the highest rates of gun ownership in the world.

When most people think of Switzerland, they imagine a sleepy -- even boring -- country of beautiful Alpine vistas and tranquil cows, where the most exciting thing that could happen would be a lake-side yodel. It comes as a surprise to many to learn that the peaceful country has one of the highest rates of gun ownership in the world -- lagging behind the United States, naturally, but still above the rest of Western Europe, not to mention Iraq.

Now the high number of gun-related deaths, combined with the fact that many of those guns are stored in bedroom closets or attics, is leading opposition politicians and lobby groups to call for changes to the country's gun laws.

The Swiss parliament has repeatedly turned down motions calling for a ban on storing guns at home, most recently in March. However a parliamentary commission has now proposed a compromise motion which would place a ban on keeping ammunition at home.

The new motion is considered to have a good chance of success. A recent poll by the mass circulation newspaper Blick showed that 66 percent of Swiss want a ban on guns being stored at home, while 76 percent said there was no need to store both guns and ammunition at home in order to defend the country.

Meanwhile proponents of gun control are trying to force through a popular vote in favor of tightening guns laws, which they hope will take place in summer 2007. The initiative calls for imposing restrictions on who is allowed to own guns and keep them at home.

The new calls for gun control are backed by Annabelle, a leading women's magazine which is concerned about the high numbers of women who are murdered by their gun-toting husbands. Their campaign appears to have wide support -- the Blick survey showed that three quarters of all women were against storing army weapons at home.

However, the new moves to impose limits on gun and ammunition ownership are opposed by gun advocates. "No gun law will ever stop the crazy man from doing outrageous things," Ferdinand Hediger of the pro-gun lobby Pro Tell -- named for crossbow-wielding Swiss national hero William Tell -- told the Washington Post.

As a small, neutral country, Switzerland has traditionally felt the need to maintain an armed militia, a strategy known as the "porcupine" approach -- the country may be small but it has millions of deadly "quills" in the shape of its reserve soldiers.

Able-bodied men have to serve in the military and are issued with assault rifles or pistols. They are allowed to keep their weapons and 50 rounds of ammunition at home during military service -- which generally goes to the age of 30 or even longer -- so that the army can be mobilized at short notice. Many men buy their weapons after they finish their military service, and the arms are often stored in unsecured closets, attics or cellars.

The new public mood is largely in response to a series of shootings involving army weapons. In a 2001 incident which sparked nationwide debate, 15 people died when a man opened fire with an army assault rifle in a regional parliament building in the small town of Zug, shooting 14 people and killing himself.

In another much-publicized case, the private banker Gerold Stadler last year used his army-issue pistol to commit suicide after killing his pregnant wife, former world champion skiier Corinne Rey-Bellet, and her brother. In the latest incident of its kind, a 26-year-old bank employee opened fire with his army rifle in a hotel restaurant in Baden, killing one and wounding four on April 13 -- just three days before the Virginia Tech massacre.

Around 300 people are killed in Switzerland each year in incidents -- mostly suicides and family murders -- involving army guns. According to a 25-country survey by the British-based non-governmental organization International Action Network on Small Arms, Switzerland's total number of gun deaths, including accidents, in 2005 was 6.2 per 100,000 people -- second only to the US rate of 9.42 per 100,000.

The country also has an unusually high suicide rate, at 19.1 suicides per 100,000 inhabitants, according to a 2005 study by the country's Federal Health Office. The rate is well above the World Health Organization's global average of 14.5 and the European Union's rate of 14.1.

And although experts agree the high suicide rate has many factors, many feel that the ubiquity of guns certainly plays its part. "Easy access to suicide methods, in this case firearms in Switzerland, ... contributes to a high rate," Vladeta Ajdacic, a sociologist at a psychiatric hospital at Zurich's university, told the news agency Reuters.