In Malbork, Poland, about 50 kilometers (30 miles) southeast of Gdansk, Radoslaw Gajc slings a pick-ax over his shoulder. Dressed in green overalls like all the city's housing industry employees, he crosses an icy dirt track, then descends into an open pit. Just 200 meters (650 feet) away, the majestic brick walls of Malbork Castle soar in the background.

Gajc is a construction worker, and together with his colleagues he's supposed to be building a luxury hotel here. Instead, he finds himself more in the role of a gravedigger. After just a few strokes with the pick-ax, Gajc strikes bone. He reaches for a small garden spade and carefully excavates the fragments of a human jaw, two teeth still attached, then drops his find into a black plastic bucket. "At first we were constantly finding children's skeletons," he says, "and that was really hard for me. I have a young son myself."

Gajc and the others are working their way through a mass grave containing the remains of at least 1,800 people, including women and children. All the bodies were naked when they were thrown into the pit, and their cause of death is unknown. Did they die during World War II? Or later, in an epidemic? Were they the dead retrieved from the city's houses and streets after battles, to be accorded at least this form of burial?

Or are they the victims of a monstrous crime? Some of the skulls, it turns out, reveal bullet holes.

So far no forensic experts have been called in, although the excavation here has been going on for months. City officials first announced the find earlier this month, and there is a strong chance the bones are the remains of Germans. The excavation is being led by Zbigniew Sawicki, the archaeologist at Malbork's castle museum. Sawicki himself is a specialist in the Middle Ages, and the construction workers on his crew are hardly qualified to perform forensic analysis.

The one thing known for sure is that Malbork, then a German city and known as Marienburg, was engulfed in a wave of violence in 1945. This has been corroborated by numerous witnesses from that time -- Germans, Poles and even a Red Army soldier. Additionally, a great deal of evidence can be found in documents from the private Marienburg Archives in Hamburg.

This is also not the first mass grave to be found in Malbork. In 1996, 178 corpses were discovered on the grounds of Malbork Castle. Nine years later, specialists exhumed the bones of 123 more, including five women and six children, from a former trench along the southern wall of the castle. But this many bodies have never before been found in a single grave.

The search for clues leads to the final months of World War II. So far, the war had largely spared the region, then known as West Prussia. But by then, Hitler's forces were on the verge of defeat and the Red Army was advancing. In 1944, the Nazis had declared Marienburg, then a city of 30,000, a "stronghold," along with other cities on their eastern front. Thousands of men dug trenches and built bunkers. Two divisions were sent in to defend Marienburg, and the leadership wanted to evacuate civilians, to be brought back into the city after it had been successfully defended.

But when the Red Army reached Marienburg on January 25, 1945, there were only about 2,000 men standing ready. The city was swarming with refugees trying to cross the Nogat River on their way west. Groups of people jammed the streets leading to the bridges. In the train stations, others fought desperately over the last seats on the trains.

German soldiers supposedly searched homes for elderly people on the morning of January 25, in order to bring them to safety. But it's impossible to know how many civilians were still in the city when the Soviet army arrived. 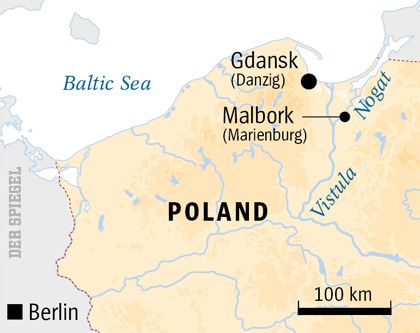 After the war ended, 1,840 Germans from Marienburg and the surrounding area were considered missing. Whether they died there in the city, or elsewhere while fleeing, is unknown. Similarly unaccounted for are Russian and Polish forced laborers who had been made to help in the fields, and the thousands of Italian prisoners of war who were still being held in Marienburg at the beginning of 1945.

What has been documented is that as the Soviet soldiers passed through villages in the area, again and again they shot male civilians and raped women. This was surely no different in Marienburg. Members of the German "Marienburg Brigade Group," who remained entrenched at the castle for weeks, found the bodies of several elderly women who had all been killed with an ax.

"The battles were really tough," Victor Zalgaller, a former Red Army soldier who became a mathematician in Leningrad after the war and is now retired in Israel, explains today. He says "women and children died" as well in Marienburg.

But was there really a massacre and then a giant burial directly in the city? "We could see the spot where the remains are now being found," says Richard Weiser, who was then an ensign with the brigade group in the castle. They also consistently captured and interrogated Red Army soldiers. Weiser feels sure that he and his fellow soldiers would have "noticed something" if a massacre had occurred.

Lilly Groeger, who lived in the city for several months starting in June 1945, later reported that a man she described as "the Russian" brought all the older people remaining in Marienburg "to Altmark" (a nearby village) "during the combat operations." Several, she says, were indeed shot.

Soldiers on both sides carried out a grim battle, which probably cost hundreds of lives. Afterward there was talk of sharpshooters, of at least 50 shot-at tanks and of sustained fires in the castle, set by the Soviets. Not until the night before March 10 did the brigade group withdraw. And according to Weiser, who was among the soldiers there, they buried their dead inside the castle. This means those people couldn't account for the bodies found in the pit now being excavated by Gajc and his fellow workers.

The next question is what happened in the weeks following the fighting. West Prussia, according to Allied plans, was supposed to become Polish, but in those first weeks, there was not yet a Polish administration and the city was under the Soviet army's control. Sawicki, the archaeologist, surmises that the soldiers began trying to clean up the city, and that out of fear of epidemics they gathered together and buried all the dead -- even animal corpses, which Sawicki has also found in the grave.

The theory makes sense. However, when the pastor Konrad Will reached Marienburg in mid-April 1945, according to his descriptions there were dead everywhere, "still unburied in the houses." The pastor selected a few men from the 300 residents he found in Marienburg to help him bury the dead. It took them until the end of the year to dig graves for a total of 273 corpses, as Will fastidiously recorded.

The Soviet army was under orders to detain Germans in the conquered eastern territories who were capable of working. They would then be put into forced labor either there or in the Soviet Union. There was a collecting point in Marienburg, where Soviet troops held not just Germans but also Poles. The living conditions in these camps are known to have been terrible in general, but there are no witness accounts available from Marienburg in particular. After the war, survivors like Lilly Groeger were able to report only that "the Russians took almost every one of the men." The older ones returned to the city after six weeks, but of the younger men, "no one came back." But if it was in fact German forced laborers who died in such numbers in Marienburg, how did children end up in the mass grave?

The situation in the region was chaotic at that point. Refugees who had been overrun by the Red Army were now being sent back to their hometowns. Meanwhile, Polish settlers arrived to settle the country's new territory, at the behest of the provisional communist government. Many Germans were suffering from hunger and many are known to have died of typhus in the summer of 1945, in Marienburg as well other places. Others survived and later left for West Germany. None reported that they had witnessed a mass mortality event.

Not just Russians, but Poles as well mistreated the Germans who remained in Marienburg. Max Domming, now 78, is an ethnic German from the area and remembers a dramatic occurrence he witnessed in the winter of 1945. He was 15 and had brought a cartload of wheat from a farm to have it milled in Marienburg.

"I had to wait a few hours," he reports, "so I went to look around the town." He was standing about 10 meters (30 feet) from the train station entrance, when the doors were suddenly thrown open and women and children came pouring out of the building "like a wave of water." Polish militia, he says, hurriedly drove them into the city with sticks and "the column didn't end and didn't end."

Domming, who worked for the executive committee of Germany's Social Democratic Party until retiring in 1995, estimates the number of people he saw that day at "200 to 300." What especially stuck in his memory was the sight of a boy of about 12, "poor and pale," who fell in the crowd. All the others "trampled over him, without anyone taking notice of him. When I had to leave, he was still lying there." Domming doesn't know what happened to the boy or to the others.

The Germans who did survive that period were forced to leave the city. The relevant authorities in the newly established Polish district announced proudly on November 3, 1947, that the Marienburg area was "almost 100 percent purged of Germans."

What remains is a pit full of bones, with no clues so far as to the actual events that brought them there. "We aren't finding any personal objects, no glasses, no gold teeth and above all, no clothing," says Sawicki, the archaeologist in Malbork.

Shortly before work ends each day, a truck comes and transports the workers' finds to a metal shed outside the city. The remains are being stored there in black body bags. What they really need is to be analyzed by experts as soon as possible, but the state attorney responsible for this has not yet reached a decision.