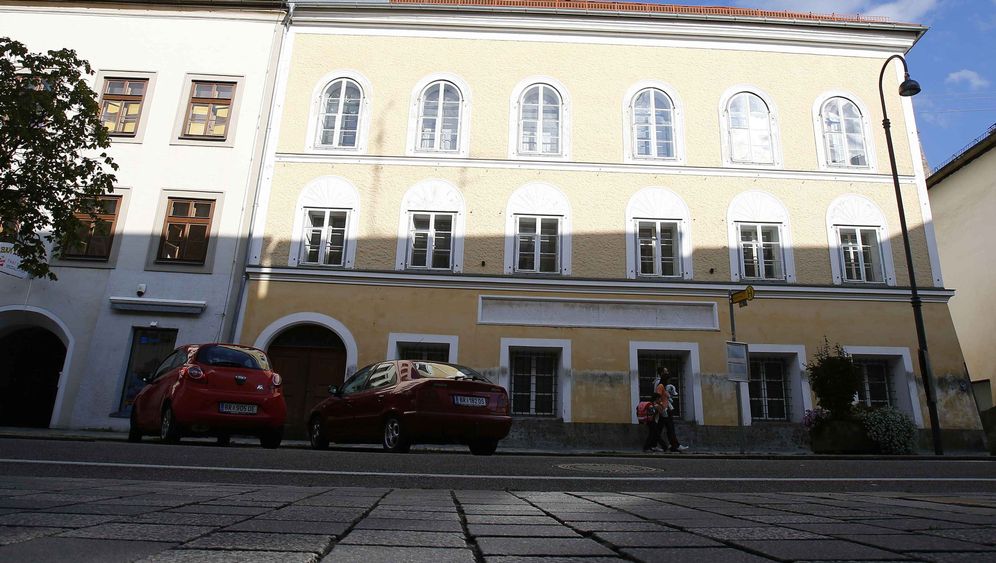 The building, for the moment, is empty. Most recently, it was used as a workshop operated by a charitable organization for disabled people. But the group moved out a year ago and since then little has happened at Salzburger Vorstadt 15.

This week, though, the site has found itself at the center of a heated debate over its future. The structure, after all, is located in the tiny town of Braunau am Inn on Austria's border with Germany. And it is the place where Adolf Hitler was born on April 20, 1889.

The back-and-forth was triggered last week when the mayor of Braunau, Johannes Waidbacher, hinted in an interview with the Austrian daily Der Standard that he was in favor of using the property merely as a residential building. "It would certainly be easier to transform the site into apartments," he said.

Waidbacher didn't stop there. Saying he was "open to many ideas," he added: "One should also ask the question in general as to whether a further Holocaust memorial makes sense when there are already so many in the area. We are stigmatized anyway. Hitler spent the first three years of his life here in our city. And it most certainly was not the most formative phase of his life. As such, we in Braunau are not prepared to take responsibility for the outbreak of World War II."

Waidbacher's comments, perhaps unsurprisingly, were not universally well received. Local politicians have since demanded that the site be transformed into some kind of memorial and the reaction from overseas has also made it clear that simply ignoring the building's history would not go over well.

Indeed, the backlash has been such that Waidbacher has since backed away from his preference for transforming the building into an apartment complex. He told the German daily Frankfurther Allgemeine Zeitung this week that "there will ultimately be a proposal that everyone involved can accept," allowing that it was "a difficult topic."

For years, it was an easy topic to ignore. The building, privately owned, is rented by the Austrian Interior Ministry and sublet to the town of Braunau. Given Hitler's systematic murder of handicapped people during the Third Reich, many felt it appropriate that his birthplace be devoted to helping the disabled. There seemed little need to launch a discussion about transforming the three-story structure into a museum.

Now that the facility has moved out, however, many are turning to a proposal made several years ago by local historian Andreas Maislinger, who helped found the Braunau Society for Contemporary History in 1993. In 2000, he submitted a plan to establish what he calls a "House of Responsibility" at the site. He envisions a historical exhibition in combination with a social services facility and projects to promote intercultural understanding.

"The mayor says he supports the idea, but he has been a bit hesitant," says Maislinger. "It's normal that people in Braunau don't want to think the entire time about Hitler. If you look at Berlin, people there don't always think about the fact that Hitler made his decisions there. It's a big city. But with smaller cities, like Dachau for example, it is more difficult. And Braunau is even smaller than that. One can understand it, but still, there are a lot of people that agree with my concept."

'Something Has to Happen'

And the building, part of a collection of older structures which have enjoyed protected status since the early 20th century, isn't going anywhere, despite periodic proposals to simply tear it down and be done with it.

At the time of Hitler's birth, it was a boarding house, and his father Alois and mother Klara didn't stay there for long, moving to Passau in 1892. Following the German annexation of Austria, however, the Nazi party took an interest in the building. In 1938, Hitler's private secretary Martin Bormann bought it in the hopes of eventually turning it into a monument on par with the birthplaces of Stalin and Mussolini. After the war, the US wanted to turn it into an exhibition on the horrors of the Holocaust.

But in 1952, the building was bought back by the family that had sold it in 1938 -- and that remains the primary hurdle to any plans for its future today. The family, simply put, has shown no interest in selling the property. Indeed, as Maislinger admits, the current debate sparked by the mayor remains academic until the building changes hands.

Maislinger, though, is optimistic that it ultimately will. "Something has to happen with the house. It can't just sit there empty for the next 10 years," he says. "Owning property is also a responsibility. And if there is a historical connection, no matter what kind of connection it might be, that responsibility is even larger."