The president of Greece's SEV business federation, Dimitris Daskalopoulos, recently invited journalists to his imposing neoclassical headquarters in Athens. He straightened his tie, leaned forward and with a grim expression spoke into half a dozen microphones arrayed in front of him. "Now the issue is simply whether we remain in Europe or not. The governing parties have an obligation to work together honestly to finally banish the nightmare of a return to the drachma. If this government doesn't get it right, Greece will go hungry."

His dramatic appeal was ignored, once again. The Socialist PASOK party, the conservative-liberal New Democracy party and the far-right LAOS party formed a transitional government six weeks ago under non-partisan former central banker Lucas Papademos. They vowed to avert a looming state bankruptcy. But they remain as divided as ever.

Instead of getting down to business, they are absorbed in policy wrangling that seems absurdly trivial given the scale of the tasks they face. At a cabinet meeting last Thursday, Finance Minister Evangelos Venizelos and Transport Minister Makis Voridis of LAOS fell out over a draft law to accelerate amicable divorces. Marriage, Voridis argued, was "a central component of our value system" -- therefore LAOS could not agree to the law. Papademos remained silent.

This isn't the first time the LAOS minister has blocked a decision. Recently he resisted the complete liberalization of the issue of taxi licenses, and publicly threatened to resign.

'The Negotiations Have Run into Major Difficulties'

To its credit, the Papademos government mastered two important challenges early on: it secured the payout of the sixth international loan tranche of more than €8 billion ($10.45 billion) from the €110 billion European Union and International Monetary Fund bailout package agreed in May 2010. And the parliament has passed the state budget for 2012.

But since then, Athens has failed to deliver on the binding reforms and spending cuts it had pledged in return for the cash. The top priority is the exchange of Greek government debt agreed at the EU summit on Oct 27. Under the deal, private creditors will voluntarily write down 50 percent of their loans. But under the terms of the summit agreement, the Greek government must reach an agreement with creditors before the end of 2011 so that the bonds can be swapped for new securities at the start of 2012. It is clear that Greece won't make that deadline. "The negotiations have run into major difficulties, we are working day and night to find a solution," Venizelos admitted.

The sticking points appear to be the levels of interest rates that Greece will have to pay for new bonds and the size of the voluntary debt cut. Even if an agreement is reached, there is doubt about whether all private creditors will stick to it. Spanish hedge fund Vega, for example, has already pulled out of the talks and threatened legal action if the losses amount to more than 50 percent. If the debt swap fails, the entire 2012 budget will be null and void because it depends on drastically reduced interest payments on Greece's government debt.

Reforms Have Ground to a Halt

The October EU summit also promised Greece an urgently needed further megaloan totalling €130 billion -- but only if the country meets strict conditions that amount to political dynamite. The reforms undertaken so far in return for the 2010 aid package were so unpopular that the country is at the breaking point. Indeed, further pain will be unavoidable. Despite all the cuts this year, the government has to close an additional budget hole of €3.3 billion due to the unexpectedly severe recession.

The extent to which Greece's reform drive has slowed under Papademos can be seen in many areas:

• The privatization program has completely ground to a halt. The plan was to sell off €50 billion of government-owned assets by 2015, but so far only €1.7 billion has been raised. Why? Because the government first wanted to implement the debt swap.

• Labor markets have yet to be freed up and deregulated.

• The program of public sector layoffs is a fiasco. Instead of the planned 30,000 job cuts, only around 1,000 workers have been transferred to a so-called labor reserve by the end of 2011.

• The merging or winding down of public authorities is proceeding at a snail's pace.

• The modernization of the civil serice and of the inefficient health service is plagued by delays.

• The planned third round of pension cuts has come to a stop. Additional pensions are to be cut by between 15 and 40 percent -- but the New Democracy party in particular is blocking the process.

On Friday, Papademos, who is virtually a lame duck prime minster, met the party leaders to sound out what can still be done before the next general election -- and when it is to be held. Feb. 19 has so far been scheduled as the date for the election. It's not suprising that New Democracy leader Antonis Samaras in particular wants to stick to that date, given a recent opinion poll that puts his party at 30.5 percent, 12.5 points ahead of PASOK. But after a PASOK party meeting on Tuesday, Finance Minister Venizelos stated through a spokesman that the "elections will take place after Easter at the end of April," which would give the transitional government more time to implement the tax, pension and justice reforms that have been demanded by the EU and IMF in exchange for bailouts.

The transitional government started out with a lot of goodwill from the Greek public, but it has lost that trust in record time. When it was formed, some 48 percent of Greeks said they had confidence in the government -- but only 26 percent still do today. And the proportion of Greeks who distrust Papademos has surged to 65 percent from 38 percent. Almost four out of five Greeks now think their country is heading in the wrong direction.

Public sentiment is unlikely to be improved by the publication of the private assets of the country's 572 leading politicians. It's no surprise that party leaders and members of government are well-off -- all lawmakers have had to disclose their finances for years.

But attention has focused on 11 politicians whose 2009 asset statements reveal that they withdrew substantial sums from their accounts, and who are refusing to say where the money went. Meanwhile, one LAOS member of parliament, psychiatrist Vaitsis Apostolatos, can claim to be Greece's luckiest politician. Suddenly he had €1 million in his bank account, which he said had come from a lottery win.

Despite the gloomy outlook for 2012, there are still some politicians who are determined to cheer the nation up with a touch of Christmas humor. Gerassimos Giakoumatos, a doctor and a conservative member of parliament, wished all Greeks a "Happy New Year with good health and above all luck." After all, the passengers on board the Titanic had all been healthy, he said. "They just weren't lucky." 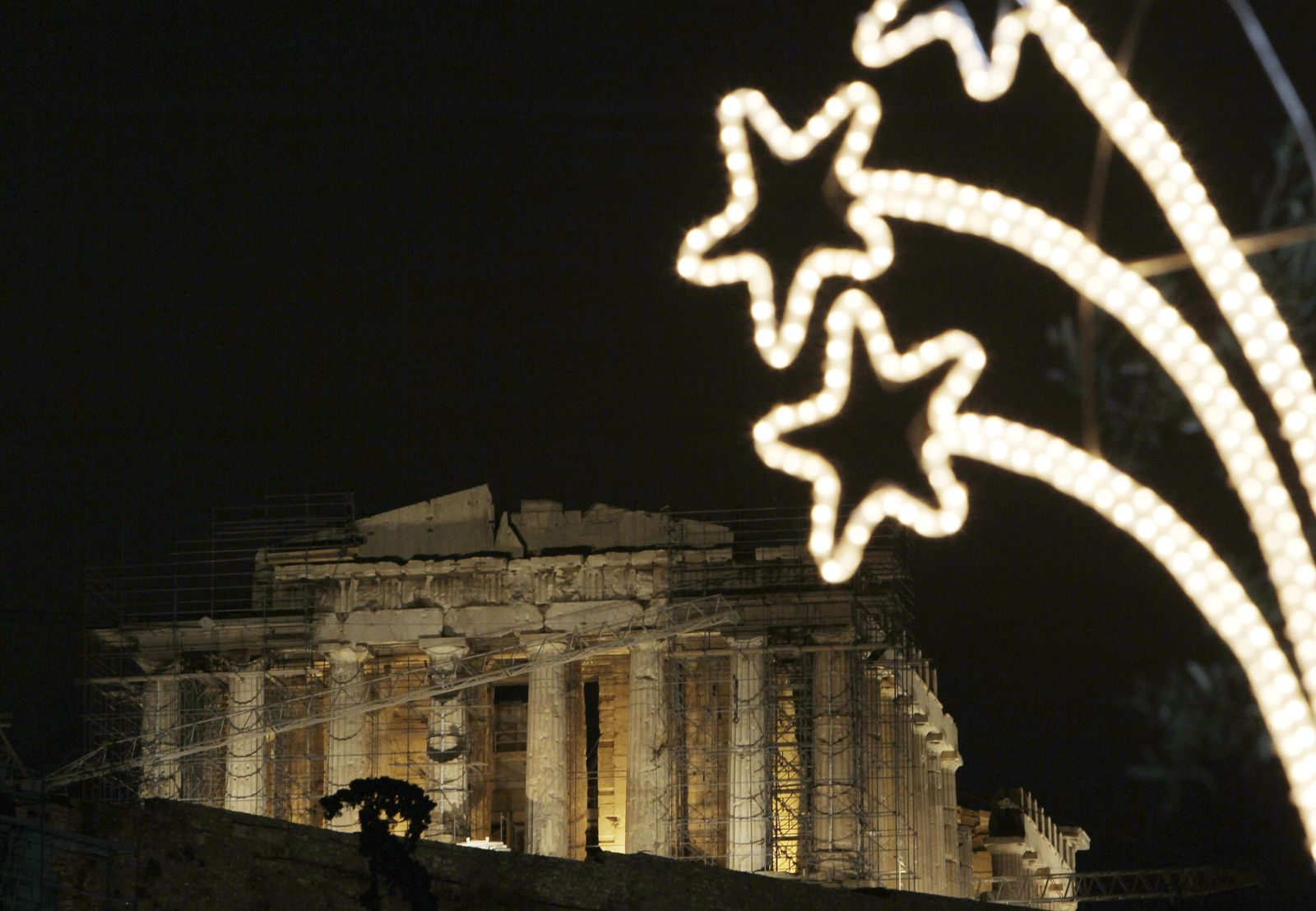 Christmas lights shine in front of the Parthenon on top of the ancient Acropolis Hill in Athens: "If this government doesn't get it right, Greece will go hungry."