His swanky offices are in one of Vienna's more affluent neighborhoods, in district 9, near the oldest university in the German-speaking world. Sigmund Freud once lived and worked just around the corner -- something of a coincidence, considering Rudolf Mayer considers himself both a "therapist and lawyer." Mayer, who has a doctorate in law, told SPIEGEL ONLINE that he is attracted precisely to cases with a "psychological-psychiatric background."

"Josef Fritzl is being portrayed as a horrific monster and sexual tyrant," Mayer says. "My job is to show him as a human being." Mayer says he used his first 10-minute meeting with his 73-year-old client to "get a feeling for this person."

"I turn off my rational brain, switch on my gut instinct and concentrate on the person's eyes," says the lawyer. It's a tried and tested tactic, he says, explaining that he believes the eyes reveal 90 percent of a person's psyche.

In the photographs that have been circulated of Josef Fritzl, his pale eyes seem diabolic to anyone who already has a biased opinion of him. Mayer says that despite this "Jack Nicholson look," he relied on his gut instinct. "The first 30 seconds of a meeting is crucial for establishing psychological contact. I believe that in this time I succeeded in bonding with Mr. Fritzl."

Mayer says of his client: "I had the impression that this was a paterfamilias, a patriarch, with good but also bad sides." Fritzl is, according to his lawyer, "very seriously affected and emotionally broken." This assessment doesnt, however, take away from the fact that in the interrogations that have taken place so far, Fritzl has come across as "unresponsive."

In their second meeting, Fritzl spent two hours speaking about his life and giving "his version of things." "I just let him talk and I listened to him," Mayer says but declines to reveal any details about the conversation. He has also asked his client to be more reticent. "He has already said too much."

Little is known about Fritzl's early life, before he married his wife Rosemarie in 1957 -- where he came from, his parents and his childhood. Why did he destroy the life of his child in such a perfidious way? "That is exactly where my task begins," says his lawyer. "Who is Josef Fritzl? Why is he the way he is?" In the conversations that will follow in the coming weeks, Mayer wants to get closer to answering these questions.

Although he does not yet have any idea why Fritzl decided to imprison his own daughter, Mayer is convinced, "after three decades' professional experience as a defense lawyer," of one thing: "There is an explanation for every deed, for every criminal act."

It's a statement that is sure to provoke criticism from the public, and Mayer knows it. The first letters and threatening e-mails from the public have started to arrive. "Lawyers who refuse to defend certain acts contradict my view of professional ethics," he says. The 60-year-old lawyer sees the hate mail as an occupational hazard. 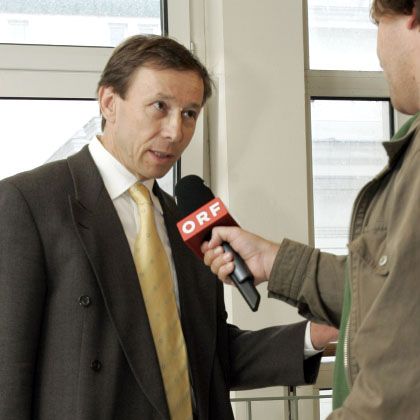 Rudolf Mayer, Josef Fritzl's lawyer: "There is an explanation for every deed, for every criminal act."

Mayer is not shocked by the severity of the crime that Fritzl has committed -- by his own admission -- or the circumstances of the offense. "I wasn't shocked," he says rocking back and forth in his chair. "Mr. Fritzl was asked if he wanted me as his defense lawyer and he said 'Yes, I know him from the TV!'" Mayer explains, looking not unsatisfied.

Fritzl now shares a cell in St. Pölten prison with an inmate who is accused of having shot someone, Mayer reports. Prison staff are "keeping a very close eye on him." He is being especially protected for two reasons: First, so he won't "pass judgment on himself" and try to commit suicide, and second because "he doesn't have a particularly good position in the hierarchy of prisoners."

"He seems a bit afraid," says Günther Mörwald, prison governor at St. Pölten. The prisoner from Amstetten is not speaking much, but, according to Mörwald, he is slowly understanding "what he did to his family." The prison governor says he is seeing the "first signs of regret," from Fritzl.

His lawyer is convinced that there are no accomplices in this case. Mayer says he doesnt know if Fritzl could have been involved in any other crimes -- such as the unsolved murder of Martina P. in 1986 or other rapes. "I am waiting for the coming conversations with my client to see if he mentions anything."

This is not the first case with which the well-known lawyer has hit the headlines. In 1996 he defended two alleged neo-Nazis in the so-called "letter bomb trial," during which he revealed the true perpetrator and succeeded in getting his two clients acquitted.

Mayer must be aware that the chances of getting any kind of light sentence for Josef Fritzl look slim, but that doesnt seem to deter him.

The coming trial already looks like it will be a huge sensation, which will be watched by the whole world. Mayer doesnt seem to mind all the attention. On the contrary. "Even a Colombian radio station has asked me if I am prepared to do a live interview," he says.