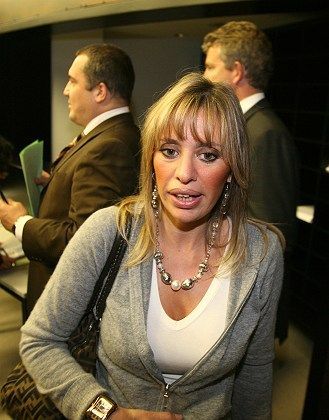 Italian MEP Alessandra Mussolini has caused the break up of the ITS group with her comments about Romanians.

The European Parliament's first far-right parliamentary bloc fell apart on Wednesday, less than a year after it had formed, after its Romanian members opted to leave the group -- ironically because of the racism of a fellow group member.

The Identity, Tradition, Sovereignty Group (ITS) was stripped of its official status because it fell short of the minimum of 20 members of the European Parliament (MEPs) needed to form a parliamentary group. The collection of xenophobes, Euroskeptics and far-right nationalists are now losing tens of thousands of euros in funding and will have less speaking time in parliament.

The collapse of the group was sparked by derogatory comments about Romanians by Alessandra Mussolini, granddaughter of the Italian fascist leader Benito Mussolini and a member of the group.

Mussolini had told a Romanian newspaper that law-breaking had become "a way of life for Romanians" after the arrest of a Romanian man on charges of murdering the wife of an Italian naval officer in Rome two weeks ago. The crime led to the Italian government rushing through a decree that would allow police to deport EU citizens, particularly Romanians.

Last week the Greater Romania Party's five members announced they intended to withdraw from the bloc in protest at Mussolini's comments unless she were removed.

The formation of the far-right grouping had been made possible after Romania and Bulgaria joined the European Union on Jan. 1, 2007, bringing with it five Romanian and one Bulgarian extreme-right MEPs into the parliament. The ITS group that was cobbled together included Jean-Marie Le Pen's National Front from France and Belgium's Vlaams Belang. From the beginning there were doubts as to how long parties from various countries whose raison d'être is to oppose immigration and foreigners would manage to work together.

On Wednesday, as the parliament's Vice-President Edward McMillan-Scott announced the group's demise, the parliament erupted into applause and cheers.

German MEP Martin Schulz, leader of the Socialist Group in the European Parliament, said the ITS had never belonged to European democracy. "The good news is that the international of the ultra-nationalists no longer exists and cannot use the money of the European taxpayer to support its xenophobia and neo-fascism," he said.