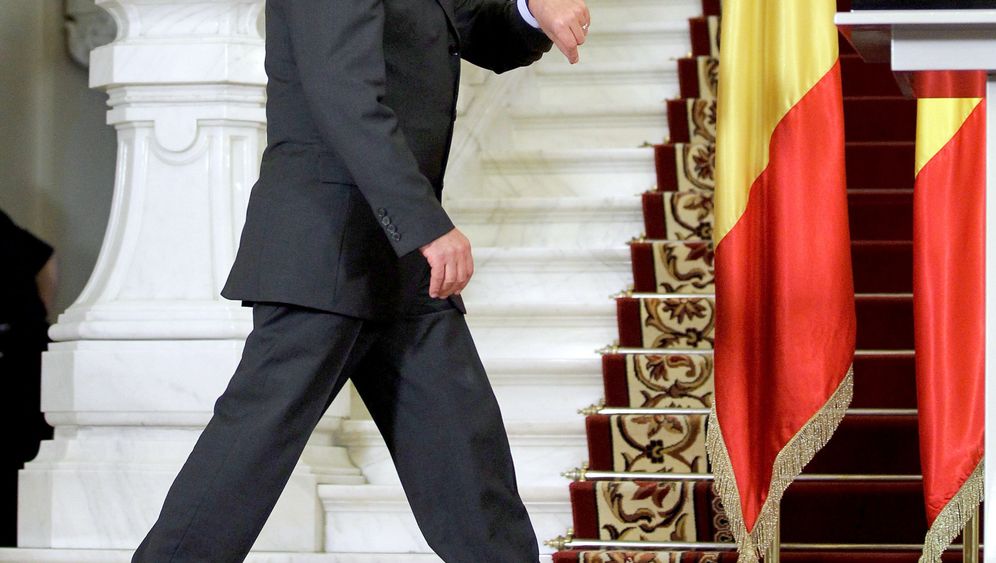 Newly installed Romanian Prime Minister Victor Ponta, 39, and his political allies are attempting to consolidate their power in Romania. After replacing the parliamentary president and restricting the powers of the country's Constitutional Court , the coalition led by Ponta, a Social Democrat, is now seeking to impeach President Traian Basescu. The parliament began proceedings last Friday, suspending the president. A nationwide referendum is to be held at the end of the month. The opposition is calling it a "coup," and Romanian philosopher and art historian Andrei Plesu, 63, is also concerned. He is viewed as an intellectual authority both in Romania and abroad. Prior to the fall of Communism Plesu was a professor at the Academy of Fine Arts in Bucharest, but was forced to give up teaching when he was banished to a village for associating with dissidents shortly before the overthrow of then dictator Nicolae Ceauescu. Plesu served as minister of culture after 1989 before working as a philosophy professor. From 1997 to 1999 he was Romania 's foreign minister as an independent. He currently heads the New Europe College in Bucharest .

During my stay in Berlin in recent weeks, I met with the former mayor of Budapest several times. Starting in 1990, Gábor Demszky governed the city for 20 years; now he was telling me about the situation in Hungary. He sees it as a fatal mixture between the administrations of Miklós Horthy, the Hungarian head of state who served at Hitler's pleasure, and János Kádár, the later head of the Hungarian Socialist Workers' Party. According to Demszky, the situation is characterized by dictatorial and fascist impulses, an atmosphere of personal power struggles and drastic restrictions of free speech.

I was pleased to be able to tell him that Romania was in better shape. There is certainly corruption, I said, and there are dangerous political and administrative turf wars and every conceivable form of abuse and blunders. But, I added, we are not on the verge of dictatorship. Almost two months have passed since then, and now I must change my assessment: Romania is looking more and more Hungarian!

I have no intention of idealizing previous governments. They had to implement austerity measures that protected Romania from the kinds of chaotic conditions that prevail in Greece. But they also created resentment among Romanians by tolerating too many moral and legal offences within their own ranks. They paid little attention to education and healthcare, and they served their own political clientele, thereby obstructing efforts to rebuild the country's ruined infrastructure.

I worked for five months with President Traian Basescu, whose overthrow is currently in the works, and I know how destructive and brutal his behavior and his words can be. But the new government, which is a not very convincing mixture of the Socialists -- who emerged from the old communist party -- and the National Liberals, has managed to almost completely eliminate the European idea from the canon of government.

It isn't just mistakes, excesses and professional incompetence that we are talking about now. We are talking about a radical and brutal attack on the country's institutions, on democratic principles and on the independent and reliable judiciary.

In a suicidal declaration, the current prime minister, Dr. Victor Ponta, claims that he devotes "75 percent of the time in government meetings to political turf warfare." For weeks, he has been confronted with accusations that he plagiarized extensively when writing his doctoral thesis. Yet his behavior leads us to conclude that he doesn't know what constitutes plagiarism. He believes that he can copy 85 pages from another work with impunity, and without identifying the text as a quotation. When the commission that was appointed to investigate the charges of plagiarism confirmed the suspicion, it was summarily dismissed.

Half-baked amendments are bulldozed through the parliament and institutional powers are restricted, established procedure is ignored without any plausible explanation being provided. The management of the national archive (which had been tasked with securing access to documents relating to the communist dictatorship) is dismissed as are the boards of the government-run television station and the institute for investigation of political crimes before 1989. The same fate befalls the ombudsman, who represents Romanian citizens in complaints against government entities, as well as the chairmen of both chambers of parliament.

The Monitorul Oficial -- the Romanian official gazette -- is placed under control of the government and the Romanian Cultural Institute becomes the provenance of the Senate. It was one of the few institutions that did outstanding work in recent years. Now, however, the management -- seen as being supportive of the president -- can be replaced.

All of this is taking place during a period of long-deferred economic, financial and organizational problems. Within two months, the prime minister nominated two education ministers, only to quickly withdraw their nominations because of plagiarism allegations. Then he appointed a third candidate as interim education minister, only to ultimately choose a fourth, who faces pending litigation over an alleged conflict of interest among his various positions.

Prime Minister Ponta took a similar approach with his culture minister, who was forced to resign for a similar reason. Then, the position of agriculture minister was filled with a parliamentarian even though (or perhaps because) he is involved in a fraud trial with the Agriculture Ministry. The list could go on and on.

The interior minister, by the way, has defended the prime minister in his plagiarism scandal by pointing out that plagiarism has been an ordinary phenomenon since the days of Aristotle and Plato. And the foreign minister states that Europe's leading politicians could take a page from Russian President Vladimir Putin's book when it comes to competency and efficiency.

The governing coalition has rushed into the impeachment proceedings against the president. The new president of the Senate, Crin Antonescu, who became Romania's acting president on Friday due to the suspension of Basescu, attained his position as the head of the Senate despite an unusual circumstance: He was absent from about 98.5 percent of the sessions of the body which he now leads. There is nothing on the 52-year-old's résumé to indicate why he should be suited for his future duties. The only political idea on his agenda is the impeachment of Traian Basescu.

An atmosphere of amazement and uncertainty prevails in Romania. Two Nobel Prize winners, Herta Müller and Tomas Tranströmer, many foreign institutions, the ambassador of the United States in Bucharest, the European Justice Commissioner, leading European politicians such as German Chancellor Angela Merkel, countless Romanian artists and intellectuals, various institutions of civil society and youth organizations are protesting against current developments -- because it has clearly begun spinning out of control.

Who wants to live in a country like this? For my part, I feel burdened by the atmosphere created by the Romanian government. I want to be able to do my work, and I have no special demands. All I want is a minimum level of normalcy that makes it possible for me to bring my projects and my life to a successful conclusion.

In essence, this is also the responsibility of governments. They should make it possible for the people in their country to go about their business in peace, and under humane conditions. But for some time now, I have been waking up every morning to witness the disconcerting signs of social decay.

And now, for the first time in 40 years, I am not eager to return "home" from Berlin. 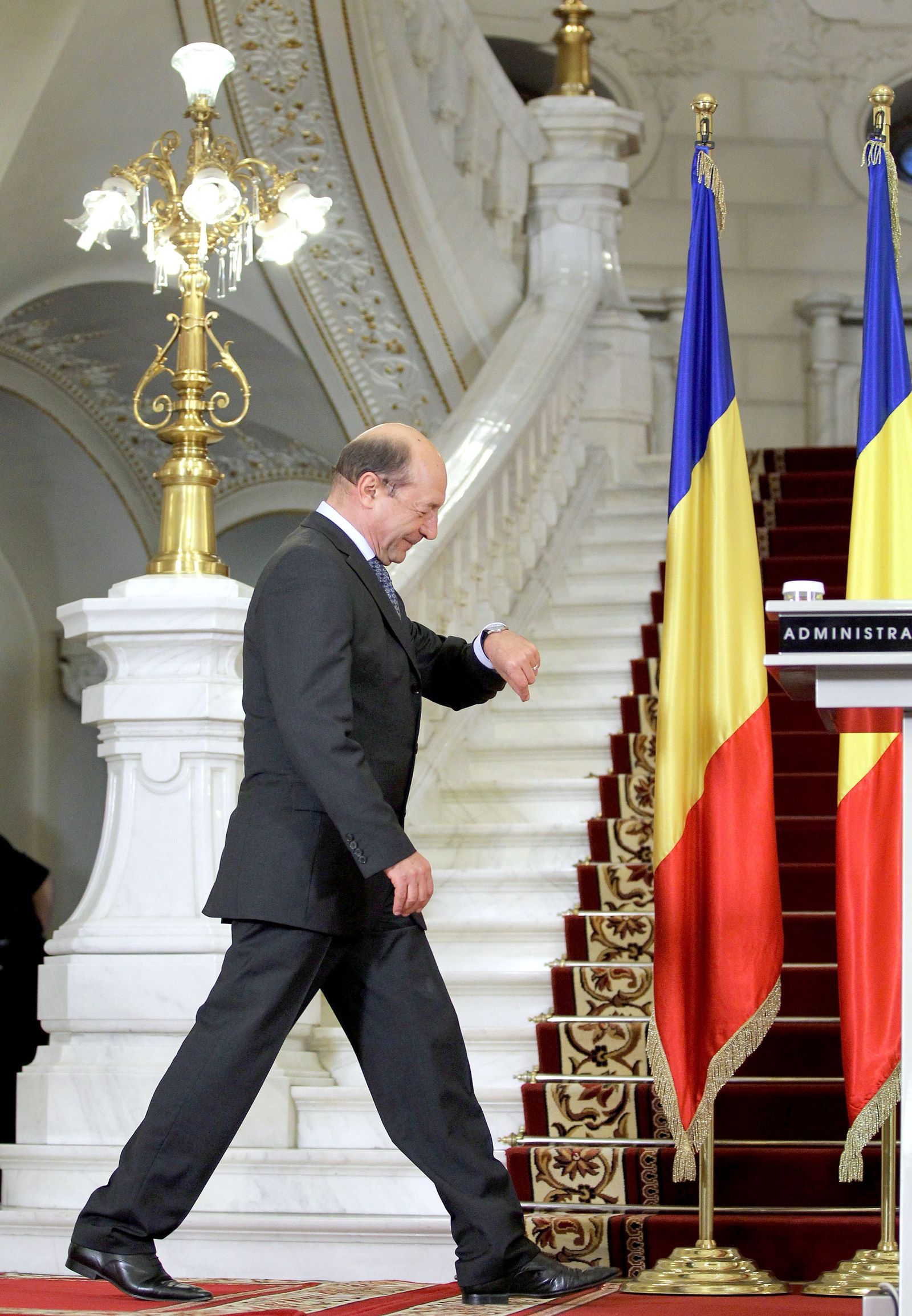 An ongoing power struggle in Romania will likely cost President Traian Basescu his job. New Prime Minister Victor Ponta has initiated impeachment proceedings against Basescu and has also sought to consolidate his power by limiting the reach of the country's Constitutional Court.