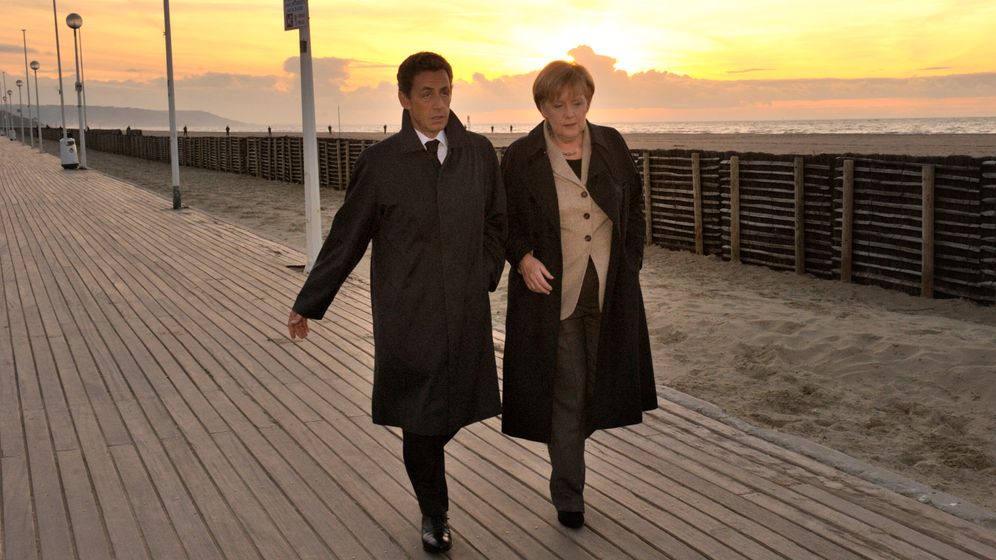 Europe's political elites are a pathetic sight at the moment, from their contradictory reactions to the rebellions in the Arab world to their timid handling of the euro crisis. Either they persist in doing nothing or they flee from one falsehood to the next, all in the expectation that this will enable them to gain control over the markets. Now that the European elites have had to produce proof of their long-held claim that Europe is a capable player on the global political and economic stage, they have done nothing but flounder. And because they refuse to believe that this is the case, they celebrate every stumbling move as the salvation of Europe and the euro. The poor image Europe is currently projecting is largely the result of the impotence of its elites.

In light of this failure of the elites, it is hardly surprising that we are hearing renewed calls for the democratization of Europe. Suddenly, the people are expected to fix what the elites have botched. Since they are already being asked to pay for the problems caused by the elites, many believe that the people should have more say in how and by whom Europe is controlled.

As reasonable as this might sound, by no means does it make as much sense as it seems at first glance. Even after the democratization of Europe, the elites in Brussels and Strasbourg will still be in charge. The only option available to the European people, to the extent that they can be referred to as such, would be to react to obvious failure by voting their leaders out of office -- and to vote an opposing elite to take their place. Whether this would fundamentally change anything is open to question.

Brussels, also the capital of Belgium, is particularly well suited to show that democracy does not automatically lead to the installation of capable elites. Since last summer's elections, Belgium's political parties have been unable to form a functioning new government. Belgium's democracy suffers from ethnic quotas and political parceling. It has long been incapable of reaching the most basic decisions. And, now, not even compromises are feasible.

Europe was a project of the elites from the very beginning, but with the proviso that democratization would happen at the next available opportunity. Although Europe has had its share of Cairo moments throughout the history of the European Union -- moments when the time seemed right for more democratization -- the opportunity was never equally favorable throughout the entire union. And because an overall majority is not sufficient in this Europe, and convincing majorities would have been necessary in all member states, these opportunities were wasted. But the elites are not particularly proactive by nature, and they hesitated and took a wait-and-see approach -- an approach that was and still is partly a result of the institutional framework within which they operate. Not surprisingly, the few attempts to bring more democracy to Europe were half-hearted at best.

Another contributing factor was the relative lack of confidence among voters. And elections to the European Parliament, which has been chosen directly by the European population since the late 1970s, have done little to assuage this skepticism: Voter turnout is notoriously low and those who do vote tend to favor populists in disproportionately high numbers. The European population has never been and still is not a European people.

Elites Are Keeping Europe Together

Those in favor of democratization respond that such a process is the only way to create a European people. This may be correct in principle, but it also requires the existence of both socioeconomic and political-cultural conditions that are certainly not in place at the moment, as is all too evident in the growing mistrust among Europeans during the euro crisis. Those who support democratization now are strengthening the centrifugal forces in Europe. Despite all mistakes and ineptitudes, it is the elites who are keeping Europe together. Rather than thinking about democratization, then, should we not be looking at ways to improve the capabilities of the elites instead?

The main problem of a constituted Europe is that power triggers centrifugal forces the minute the glow of economic prosperity begins to fade. A political and economic player that requires growth and cannot handle disturbances is not fit to survive in the 21st century. Such an actor is a problem and not the solution. Thus, the current crisis must be viewed as an appeal to transform Europe in such a way that it will produce better elites and give these elites more latitude to take action. This amounts to an amendment of the Lisbon Treaty, and it encompasses the painful thought that a smaller but more effective Europe is better than a larger Europe whose citizens view it with sullen indifference at best.

Hence, the central theme for the rebuilding of Europe is that the centrifugal forces arising from the ongoing sovereignty claims of the member states and the socioeconomic and cultural differences among the individual regions will not only be curbed, but will also be transformed into centripetal forces. In other words, Europe needs a strong and powerful center -- or it will fail.

A situation in which a country like Greece, whose economic output comprises between 2 percent and 2.5 percent of that of the entire euro zone, can imperil the European economy and drag the European common currency to the brink of failure reveals serious design flaws in the political constitution. Complaints about the fraudulent machinations of the Greeks during their accession to the euro zone, Greece's administrative deficiencies (the country doesn't even have a nationwide land registry office) and the lack of discipline and commitment within portions of the Greek population are a sideshow at best. The real problem is that all these problems were known about 10 years ago -- and that no consequences were drawn from this knowledge.

Time for the Center to Take Over from the Periphery

Europe was seen as a success in need of little maintenance -- one that could handle the Greeks. Instead of paying attention to the truly relevant factors, a religious and cultural identity debate was pursued -- a debate that made it possible to keep out the Turks while allowing the Greeks, Bulgarians and Romanians to join the EU. From the standpoint of financial and monetary policy, at least, Europe would be better off today if the opposite had been the case. Elites are characterized by the fact that they ask the right questions. The European elites did not live up to this requirement.

Another example of the failure of the European elites was their claim that the introduction of the euro on the Continent would not only create a market bigger than the US market, but also that the euro also would have what it takes to become the global economy's second reserve currency, next to the dollar. But the parallel to this idea -- the need for at least one European rating agency that could hold its own against the American rating agencies -- was ignored. The Europeans were determined to challenge the dominance of the dollar, together with all of the advantages it created for the United States, and yet they positioned the euro in an unprotected environment. It could be attacked at any time because the US rating agencies could seek out the weakest links in the euro group and apply pressure there. The prestige of the euro was and remains highly vulnerable. Instead, a project like the euro should have been prepared in a way that established strategic safeguards.

Only now are Europeans giving serious thought to such a rating agency, but now their intentions and the agency's function are all too transparent. Perhaps the only explanation for the strategic error is that the elites began to see themselves as administrators of prosperity and lost sight of the strategic struggle for power and influence. It's possible that the European elites became victims of the explanations they gave to their own population to legitimize the project. They saw themselves as something of a gentle giant and not as political players who fight for their interests abroad and prevail at home. In politics, confusing legitimization and strategy is an unforgivable sin.

There are undoubtedly numerous examples of serious failures of the elites at the European level. But the key issue is that these failures can only be corrected by the elites themselves, and that the attempt to compensate for the failures with forced democratization would lead to the disorderly disintegration of Europe. The instrument of the plebiscite, in particular, has proven to be a treacherous spanner that political players have thrown into the European works time and again. In the current situation, democratization would strengthen the capacity of anti-European players and significantly increase the number of those wielding vetoes in Brussels.

In Europe, it is unlikely that more capable elites will come into power or that the existing elites will make fewer mistakes, be more decisive and bring European interests more skillfully into play as long as the general framework of elite behavior -- the European constitution, so to speak -- is not substantially restructured. The current crisis may not be a good condition for democratization, but it is certainly an opportunity to amend the Lisbon Treaty. In the past, it was said that the Paris-Bonn or Paris-Berlin axis had to be intact for Europe to make progress. Today, the burden resting on this axis has become too heavy. The Germans are expected to provide more leadership, but as soon as they show only a small amount of leadership, it is rejected if not actively fought. In Europe, the periphery has too much power and the center too little. As long as this does not change, the EU and the euro will not emerge from the crisis. A redistribution of the political weight in Europe may be difficult, but this doesn't change the fact that it's necessary.

Prior to the EU's expansion into Eastern Europe, a debate was held over the EU's future development, but it was based on the false alternative of "deepening or expansion." The real question should have been how strong the center must be to handle a larger periphery. Now the periphery dominates the center and dictates both its political agenda and the rhythm of its decision-making processes. Even if Europe manages to muddle its way through the euro crisis and the Greek collapse, this underlying problem isn't going to go away. In fact, such crises can repeat themselves at any time. A more or less orderly national bankruptcy for Greece would be merely a tiny step toward saving the euro. The key step is a political reconstitution of Europe, a reconstitution in which democratization would be a real option and would not pose the threat of decline and disintegration.