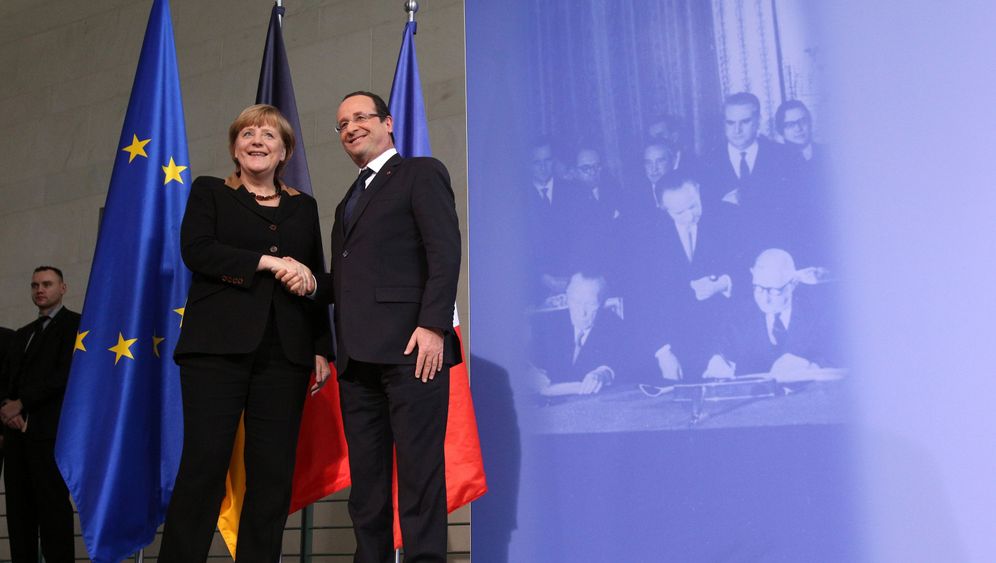 It's time to stop talking about Franco-German friendship . At least that's what Bruno Le Maire believes. Le Maire, who served as France's agriculture minister under Nicolas Sarkozy and also as the state secretary in charge of European Affairs, likely knows Germany better than anyone else in France's National Assembly.

Le Maire visits Berlin regularly, speaks excellent German and considers Chancellor Angela Merkel to be a politician of "historical magnitude." Yet Le Maire feels few in France share his affinity for their country's eastern neighbor. He is worried about Franco-German relations, and has been for some time.

People in the two countries respect one another, Le Maire says, but their cultures and their political traditions are in many ways diametrically opposed. On both sides of the border, fewer and fewer people are learning the other country's language, and the two nations hold fundamentally differing views of what Europe should be. "The relationship between our two countries is a difficult one," Le Maire says. "We need to recognize that fact and take it as our starting point."

Le Maire calls for a new kind of honesty and a sober approach in interactions between France and Germany. "For decades the focus of Franco-German relations was bringing the two countries closer, creating a 'Franco-German friendship.' But that's no longer enough," Le Maire says. "We need to start from a simple acknowledgement that this relationship is not something that happens naturally. If we start from the false assumption that it will be easy, we will always be disappointed."

This week Berlin marks, with great pomp and circumstance, the 50th anniversary of the Elysée Treaty, signed by German Chancellor Konrad Adenauer and French President General Charles de Gaulle on Jan. 22, 1963. Also known as the "treaty of friendship," this historical document laid the foundation for postwar rapprochement between the two countries.

Many speeches are being given this week, both in the German parliament and elsewhere, many evocations of all that has been achieved, well-deserved praise for this historical reconciliation -- and of course there will be a degree of hypocrisy as well. Franco-German relations are certainly worthy of celebration. But the fact is that this anniversary comes at something of an inopportune time for both sides.

Ever since de Gaulle embraced Adenauer after the signing of the treaty, demonstrative displays of affection have been part and parcel of relations between France and Germany.

Yet Le Maire is not the only one who feels the talk of friendship rings a bit hollow 50 years on, given the reality of the differences of opinion between the two countries on how to approach the euro crisis. The term "Franco-German friendship" is indeed a somewhat "unfortunate" turn of phrase here, admits Daniel Cohn-Bendit, a member of the European Parliament with the Green Party who holds both German and French citizenship. More accurate, Cohn-Bendit suggests, would be to say that is "no longer any Franco-German enmity."

French politician Jacques Delors , a former president of the European Commission, told SPIEGEL this week, "I've seen it all too often, how a German chancellor and a French president try to make the people believe there's this great friendship between them." Delors then added, "Enough with the embraces, the sauerkraut and drinking beer together. I prefer to see Merkel and Hollande publicly speak their minds."

That last point is something the two leaders have done often in recent months. In fact, Germany and France disagree on most points when it comes to solving the euro crisis or looking to Europe's future. This has been the case since well before François Hollande's election as president.

Paris doesn't understand why Berlin keeps putting on the brakes in the euro crisis, or why Merkel has rejected all proposals to collectivize a portion of the euro zone's debt and instead favors the introduction of new Europe-wide budget controls. France doesn't share Germany's faith in the formula of reducing government spending and decreasing wages, but rather believes growth and austerity can't occur simultaneously, and that in any case it would be impossible to compete with China for the lowest prices. Hollande's government considers preserving Europe's social system a more important goal.

Germany, for its part, is concerned by the limited willingness to implement reforms Hollande has demonstrated during his first months in office, and fears the French president has not fully understood the gravity of the crisis. France, meanwhile, is annoyed at how publicly the German government has expressed these concerns. The most helpful thing Berlin could do, say those close to Hollande, would be to stop publicizing those sorts of comments.

Merkel's call last year for a "political union" in Europe caught France unprepared, and Paris is still frustrated that it thus ended up on the defensive. As a result, Merkel came across as the good pro-EU European, and Hollande as the one blocking the plan, unwilling to give up any of his own powers.

Hollande's administration remains unsure whether Merkel truly believes in a political union and how exactly she envisions such a construct, or if the proposal was simply a clever political move. With so much mutual mistrust in play, it's hardly surprising that Germany and France manage to take baby steps at most, struggling their way from one hard-fought compromise to the next. In both capital cities, the mood is one of politely controlled frustration.

Still, the fact that France and Germany pursue different goals is nothing new. This was the case even with the Elysée Treaty, which Adenauer favored as a way to finally bind Germany to the West -- in other words, the United States, Britain and France -- while de Gaulle saw it as a way to create a counterbalance to the United States and the United Kingdom. Both leaders were aware they were pursuing different aims, but also that each needed the other.

Such unspoken, underlying agendas are as much a part of Franco-German relations as the grand gestures are, with the most significant of these being France's concern that Germany will once again start to dictate policy in Europe. Both sides also seek to shape the EU in their own image, and both want to implement their own economic policy traditions.

In France, well-known journalist Arnaud Leparmentier recently published a book whose last chapter is titled "Let Us Bid Goodbye to Franco-German Relations." Leparmentier describes decades of interactions between French and German leaders incapable of reaching agreements. Together, the author says, these leaders have contributed to bringing both the EU and the euro to the brink of collapse.

Not Speaking the Same Language

The relationship between these two countries "is not something that happens naturally," Le Maire says. "Our systems are entirely opposite," the politician explains. "One is a federal system, with power held by parliament, while the other is a centralist system, with the president holding power." And because there are few leading politicians in either country anymore who speak the other country's language, Le Maire continues, each side is no longer able to understand the way the other thinks.

At the same time, large blocs are forming elsewhere in the world -- in China, India and South America, for example -- that are eroding Europe's importance. Germany and France don't need sentimental rhetoric, Le Maire says -- instead they need to commit to concrete common goals, out of strategic interest: unified tax and social policies, a common labor market, a clear direction for the euro zone and better European integration. Le Maire, who presented his "Agenda 2020" for Franco-German relations in the newspaper Le Figaro this Monday, says he is waiting to hear Hollande's response to Merkel's proposed political union.

The postwar rhetoric of friendship that sometimes rings hollow nowadays is not the only problem here, nor is it the miniscule steps that seem to be the only progress the two countries are capable of making on the euro crisis. There is another problem entirely in Franco-German relations, and that is an increasing lack of interest on both sides.

A survey conducted last week in both countries suggests that the two nationalities value one another, but more than anything they think in terms of clichés: The French respect the Germans and see them as disciplined, while the Germans like the French and their way of life, but neither side shows a particular interest in the other. The days of youth exchange programs are long past, and France no longer represents the exotic coming-of-age experience for young Germans that it did for the generation that came of age in the 1960s.

In a video message last week, Merkel called on all Germans to learn French, saying that speaking the language is essential for a better understanding of Germany's neighbor. Perhaps, then, Merkel could lead by example: Whenever she meets with Hollande and no interpreters are on hand, the two communicate in broken English.

Correction: The original version of this text included a translation error that led to an inaccurate rendering of Daniel Cohn-Bendit's quotation. It has been corrected and SPIEGEL ONLINE apologizes for the error. 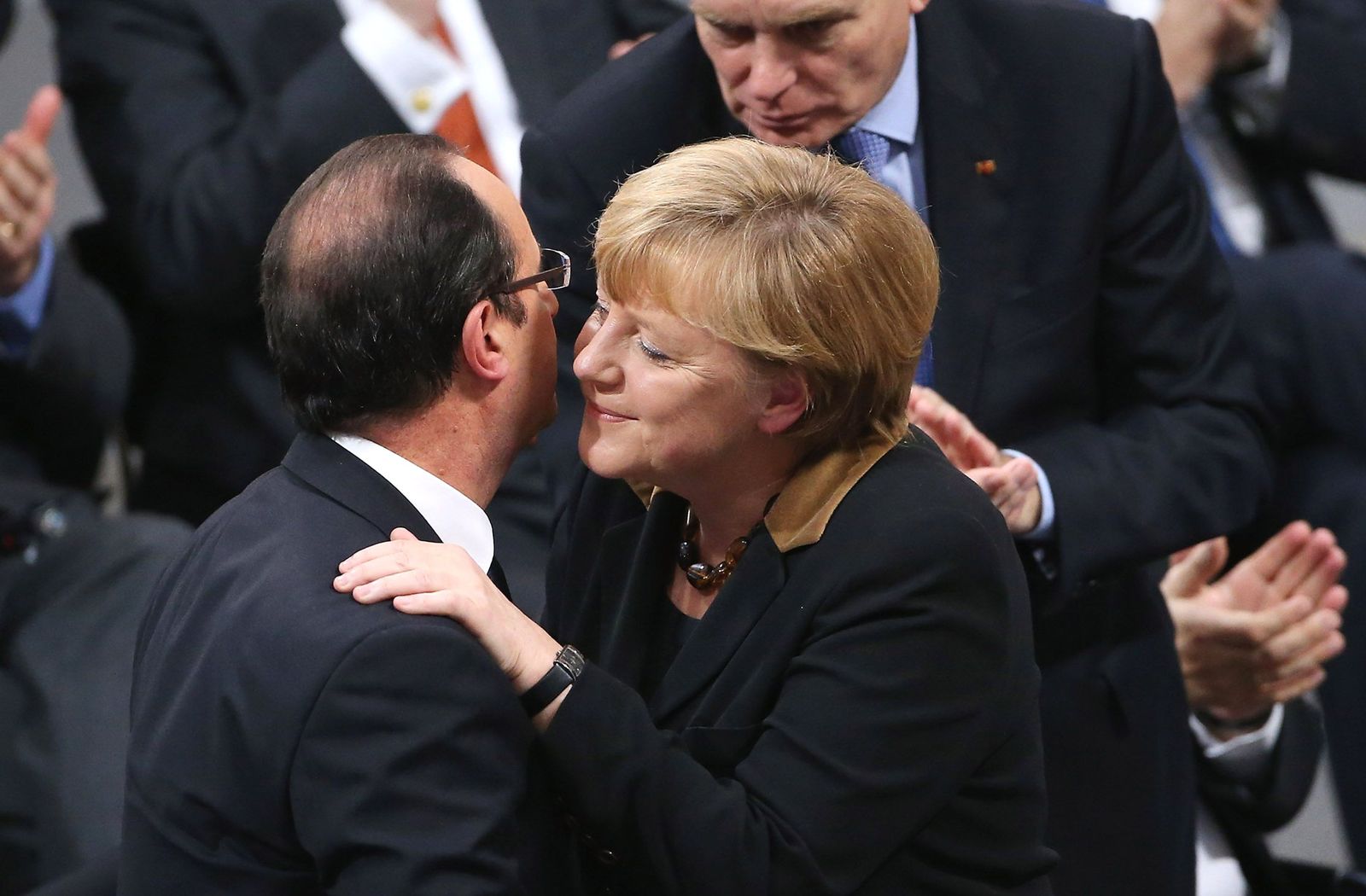 After Merkel addressed the Bundestag, she gave Hollande a kiss on both cheeks according to the French tradition. "Germany and France have always understood themselves to be the driving engine of the European unification," Merkel said. "We also know that a common German-French position in a union of 27 countries isn't everything. But we do know that progress can hardly be made, or at least it is clearly more difficult to achieve, without German-French agreement."