The poker game for the highly desired US ambassador postings in Europe has reached a decisive phase in Washington. For months, the State Department and White House have been holding secret talks with prospective candidates, and Phil Murphy has emerged as the likely pick for the US Embassy in Berlin. 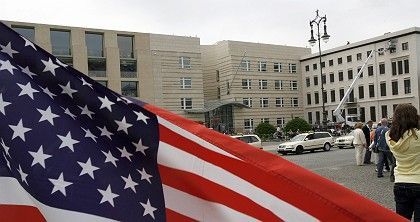 The United States Embassy on Pariser Platz square in Berlin: One of the best jobs that Obama can award in Europe.

A former top executive at New York-based investment bank Goldman Sachs, Murphy later served as the Democratic Party's national finance chairman. He now stands a great chance of being appointed to the post in the imposing US Embassy on Berlin's Pariser Platz square, the city's historical center and site of the Brandenburg Gate.

In April, Murphy rejected invitations to give speeches in Berlin that had been sent to him earlier. His explanation to the organizer: "I have been advised not to leave America." The reason is that talks for the posting had intensified.

President Barack Obama is hoping to name his ambassadors to Europe prior to his upcoming visit to Germany and France on June 5-6. "The White House is working on a blanket solution and wants to announce the posts in Brussels, London, Paris and Berlin on a single day, also for symbolic reasons," a German source with confidential information about the discussions said.

Right now, it appears Washington is conducting targeted indiscretions in order to test Murphy's acceptance in Germany. Foreign Minister Frank-Walter Steinmeier has been provided with information from one of his top deputies. "It is going to be Murphy," the deputy said, following several days of closed-door talks in Washington in April.

The CEO of Germany's Deutsche Bank Josef Ackermann has also been informed. Wolfgang Nowak, head of the Alfred Herrenhausen Society, a global forum funded by Deutsche Bank, informed him last week that Murphy is currently considered the favorite for the Germany posting within the Obama administration. Nowak previously served as a strategist to Chancellor Gerhard Schröder and was one of the initiators of the Schröder-Blair Papers published in June 1999 -- a compendium of papers by leading European social democrats calling for "third way" politics to reform the continent. He has excellent contacts within the administration in Washington.

A Man Who Raised Millions for the Democrats

Phil Murphy, 52, is also well-known inside Atlanticist circles. The financial expert held leading positions for two decades at Goldman Sachs, in his final job there he was the global co-chief of the investment banking unit. In the 1990s, he also had shared responsibility for the bank in Germany, participating in a number of transactions relating to the government's Treuhandanstalt agency, which managed the privatization of East German enterprises after reunification. At the time, he lived in Frankfurt. He has also been active with the Atlantik-Brücke (Atlantic Bridge) foundation, which is committed to fostering deeper ties between Germany and the United States. He is one of the co-founders of Altantik-Brücke's International Advisor Council.

After leaving Goldman Sachs in 2006, Murphy became the Democratic Party's leading fundraiser, in charge of attracting millions in private donations to the party. Unlike Germany and most European countries where the parties are funded through government subsidies, the finance chairmen of the Democratic and Republican parties are first and foremost responsible for filling the coffers through private fundraising. They must not only know politics, but also sell it.

Murphy can do that. Thanks to his help, the Obama presidential campaign was the best financed in US history.

In the US banking world, the ambassador candidate has long been seen as a man with political passion. He is a close confidante of former treasury secretary and Wall Street veteran Robert Rubin, the eminence gris of the Democratic Party when it come to financial issues. It was through his connection to Rubin that Murphy began working as a Democratic Party fundraiser.

A Potential Diplomat Who Came in through the Backdoor

During the 1990s he was a donor and also a fundraiser for the Clinton-Gore campaigns. And afterwards, Murphy also ran unsuccessfully in the gubernatorial race in New Jersey, where he currently lives. Another colleague from Goldman Sachs is now in that office.

In the most recent presidential campaign, Murphy first raised funds for the Democratic Party and, after the nominating convention in Denver, for candidate Obama, too. He organized a number of dinners for and with Obama, sometimes at his own home. The Christmas cards he sent out last year featured a photo of Obama sitting on the steps of his house in New Jersey -- circled by Murphy's four children.

What Murphy lacks, however, is diplomatic experience. That doesn't necessarily have to be interpreted as a defect, though. In Germany, ambassadors are selected from the pool of diplomats in the Foreign Ministry, but in the US, career diplomats are often overlooked in favor of politically engaged private citizens, often people who have been major fundraisers and party donors. An American ambassador first and foremost represents the president and must therefore be loyal to his politics.

Among those who know him, Murphy enjoys great respect. David Kamenetzky, a former colleague at Goldman Sachs and today a group executive manager at foodstuffs company Mars, told SPIEGEL ONLINE: "Phil Murphy is smart, charming and urbane. He speaks German and knows Germany and Europe very well. He is the right man to represent Obama's America abroad."

John Kornblum, the former US ambassador to Germany under the Clinton administration, considered by many in Berlin to be the model of a cosmopolitan American diplomat, is also full of praise. "Murphy has been involved in German-American relations for many years. He's a good choice."

In Berlin, Atlantik-Brücke officials are waiting longingly for Murphy's nomination. "He's a top-notch man -- with access to the president, precisely the right choice for Berlin," said Beate Lindemann, the organization's executive vice chairman.

In contrast to the two ambassadors sent to Berlin by the Bush administration, Dan Coats and William Timken, Murphy is considered more of a socialite. His friends include Paul Achleitner, a member of the board at German insurance giant Allianz and band members of the rock group Guns N' Roses.

Correction: SPIEGEL International incorrectly identified Paul Achleitner as CEO of Allianz in a translation error. He is a member of the board.