For those in Europe who are convinced of the efficacy and irreplaceability of the European Union, the statistics on voter turnout in the European parliamentary elections which finished on Sunday made depressing reading. Across the 27-member bloc, just 42.9 percent of eligible voters cast their ballots. That marks the lowest turnout since direct voting began in 1979. 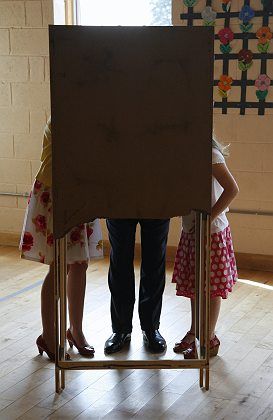 Voters in Ireland, among the minority in Europe who cast their ballots.

In a number of Eastern European countries, the total was well below even that. In Romania, just over a quarter of voters voted. In Lithuania, it was just 20.9 percent. And Slovakia solidified its status as the champions of apathy with just 19.6 percent finding their way to the polling stations, though that was an improvement on the 17.4 percent who voted in 2004.

In Germany, too, turnout was low, at 43.3 percent -- a fact which has now kicked off a discussion in Europe's largest country as to how to encourage more citizens to exercise their right to vote.

German Interior Minister Wolfgang Schäuble repeated an idea he has voiced before of allowing Europeans to have a direct vote for a European Union president. "If the campaign included a race for a person at the head of Europe, that would clearly generate attention across Europe," Schäuble, a member of Chancellor Angela Merkel's Christian Democratic Union, told the tabloid Bild on Tuesday.

Elmar Brok, a member of European Parliament, seconded his party colleague, with German parliamentarian Gunther Krichbaum, also of the CDU, suggesting that commissioners likewise be put up for a popular vote.

Currently, the European Parliament is the only EU body that is subject to popular election. The parliament has gained power in recent years, with the Lisbon Treaty set to grant the body control over more policy areas and hand it greater authority when it comes to spending the bloc's budget. Still, most of the major decisions are made in the European Council, the body which is made up of European heads of state and government. The European Commission, the EU's executive body, is likewise not subject to a direct vote.

Schäuble's CDU wasn't the only party grumbling about low voter turnout on Tuesday. After their election day debacle, Social Democrats (SPD) have zeroed in on low voter turnout as the least painful explanation for the party's 20.8 percent showing. Germany's SPD parliamentarian Jörn Thiessen has an idea of his own to confront the problem: Fine voters who don't cast their ballots. "We politicians are required to vote in parliament," he told Bild. "One can require the same of voters in an election. Those who don't cast their ballots should be fined €50. A democracy without democrats doesn't work."

Thiessen's idea is not quite as outlandish as it may sound. Australia has enforced compulsory voting since 1924 and fines people between 20 and 70 Australian dollars should they provide no good reason for not having cast their ballots. Argentina is also a member of the elite, mandatory voting club.

There are also a few European members in that club, including Luxembourg and Belgium. Their turnouts in the European elections: 91 percent and 90.4 percent, respectively.

Some, though, are doubtful that such a regime would work as a quick fix. "Using compulsory voting as a solution to low voter turnout in European elections is slightly problematic -- it would send out the wrong message," Julia De Clerck-Sachsse, a researcher at the Centre for European Policy Studies in Brussels, told SPIEGEL ONLINE. "The real issue to address first is to make sure there's more awareness of EU issues."