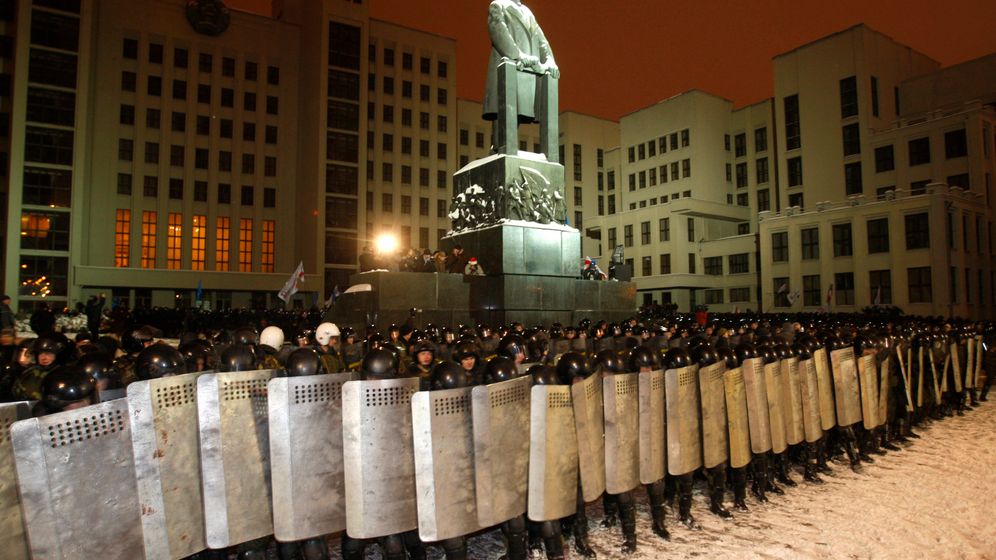 Alexander Lukashenko, who has been president of Belarus for the last 16 years, is fond of presenting himself as the caring father of the nation. "Hopefully nothing happens to the people," he said prior to Sunday's presidential elections in the country. "We have to protect them." That, he went on, is one of the primary tasks of the state.

The reality, it would seem, is different. The police and intelligence services in Belarus are focused primarily on the protection of one person: Lukashenko himself. Keeping him in power looks to be priority number one.

Throughout Sunday night and into the early hours of Monday morning, security forces went after both opposition activists and critical journalists who denounced the elections as fraudulent. Demonstrators were beaten and at least four of the nine candidates who ran against Lukashenko were arrested. Police took hundreds of protesters into custody. According to official election results announced early Monday morning, Lukashenko won the election with a total of 79.7 percent of the votes.

Prior to the vote, Western observers said the campaign had been more democratic than in past elections. Now, though, the violence with which the regime confronted protestors will likely have consequences for relations between Belarus and the European Union. The EU recently pledged €3.5 billion ($4.6 billion) in aid for the country, which is heavily dependent on energy imports from Russia. German Foreign Minister Guido Westerwelle said during a visit to the capital Minsk in early November that it would be a "litmus test for democracy" in Belarus. Lukashenko retorted at the time that Westerwelle could "count the votes" himself if he wanted.

Non-Transparent and Easy to Manipulate

It was already clear by early Sunday evening that the incumbent would be declared the victor. Opposition candidates gathered their supporters for a march to Independence Square in the heart of Minsk. A group led by opposition candidate Vladimir Neklyayev, who received 1.8 percent of the vote according to the official results, was blocked by security personnel and a police car. When the demonstrators attempted to shove the vehicle aside, police and members of the Belarus intelligence service, known as the KGB, began beating the crowd with batons. Neklyayev was seriously injured and lost consciousness. Despite the police brutality, however, over 10,000 Lukashenko opponents gathered in the capital to protest what they saw as election fraud.

The opposition was particularly critical of the prevalent practice of casting ballots prior to election day. The process is seen as non-transparent and easy to manipulate. Furthermore, the opposition was severely limited in the number of observers they could send to regional election commission headquarters. In Minsk, there were widespread rumors that in reality, Lukashenko had not received the required absolute majority of over 50 percent in the first round of elections.

The head of the Central Elections Commission, Lidiya Ermoshina -- who was appointed by Lukashenko -- said that her office was aware of only very few complaints about the elections. Russian election observers said on Monday that the outcome of the vote was legitimate.

Other observers, however, were unanimous in their disapproval. Observers from the Organization for Security and Cooperation in Europe said that Lukashenko "secured his re-election through his authoritarian control of the media." The US Embassy in Minsk said that Washington was "especially concerned over excessive use of force by the authorities, including the beating and detention of several presidential candidates," according to the Associated Press.

German Foreign Minister Guido Westerwelle said "it is unacceptable to harass, beat or arrest opposition candidates and their supporters who want to exert their right to freedom of expression." Poland demanded the immediate release of opposition candidates and European Parliament President Jerzy Buzek was scathing in his critique: "This cowardly attack on defenseless presidential candidates is horrifying and scandalous."

Belarus is seen as the last Soviet-style dictatorship in Europe with Lukashenko routinely tallying over 80 percent in past presidential elections, all of which have been condemned as being neither free nor fair. With opposition candidates having been given freer reign this year prior to Sunday's vote, there had been some hope that the country of 10 million was preparing to introduce at least a minimum of democracy. Lukashenko had also been making overtures to the European Union and the US of late. But Sunday's violence seems certain to put that process on indefinite hold.

Abducted from a Hospital Bed

Demonstrators in the center of Minsk on Sunday night demanded the resignation of Lukashenko with leaders calling for non-violent protest. Still, some in the crowd broke windows and kicked in the doors of a government building -- whether it was demonstrators to blame or provocateurs remains unclear.

Amid the subsequent violence, dozens of demonstrators were heavily beaten, including presidential candidate Andrei Sannikov. Sannikov was reportedly taken into custody on the way to the hospital. His wife, who works as a reporter for the Russian newspaper Novaya Gazeta, told the radio station Echo Moscow that her husband had been "struck several times in the face."

Aides to injured presidential candidate Neklyayev reported that he was abducted by several men in civilian clothing shortly after arriving at hospital with serious head wounds.

At 4:20 on Monday morning, special forces broke down the door of the offices of the opposition website Charter 97. Editor in Chief Natalia Radina only had time for one final bit of news. "We are all at the KGB," she wrote.