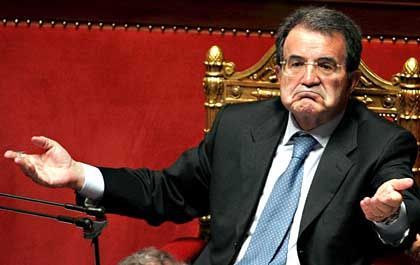 Italian Prime Minister Romano Prodi, shown here in a May 2006 file photo, hangs on in power despite continually being written off.

Gravity appears to function in a similar way in Italian politics as it does in animated cartoons. In a cartoon, when the hero runs off a cliff he keeps on going as if nothing has happened, only crashing to the ground when he notices the abyss below. Romano Prodi seems to have decided not to look down.

Week after week, the newspapers declare the 67-year-old Italian prime minister to be finished politically -- deceived by his allies, duped by his own intelligence services and considered completely incompetent by his fellow business professors.

Last week Prodi announced, once again, that he has the government's firm support. And to those in his coalition government who were urging him to take action, he said: "Here is the push forward you are demanding." Then he announced his plan to increase the pensions of some retirees by €50-70. These are the visions of Romano Prodi.

There are easier jobs than his. Prodi, a native of Bologna and former president of the European Commission, has been in office for more than a year now. The economy has gained some momentum, and yet when Prodi's name comes up in the country's political back rooms, he is usually referred to in the past tense.

Italian cartoonist Giorgio Forattini depicts Prodi as a square-headed country pastor whose cross has been replaced by a hammer and sickle dangling on a chain in front of his belly. It is easy to poke fun at this affable man, at his seemingly endless sentences, his demonstrative ease and his composure so complete it borders on sleep.

And yet, for someone whose political prospects were unpromising after his narrow election victory last year, Prodi has in fact been rather successful in his first year in office. Newspaper articles about Italy have moved from the gossip columns to the political pages, and Italy is once again being taken seriously in Brussels. Interior Minister Giulio Amato is German Interior Minister Wolfgang Schäuble's favorite counterpart in Europe. "Grazie, Italia," US President George W. Bush said when he recently visited Rome, partly in appreciation for Prodi's military help in Lebanon.

In the wake of the recovery in the euro zone, the Italian economy is also predicted to grow by 1.9 percent this year. In 2007, the national deficit will be well below the critical 3 percent level, something that hasn't happened in a long time.

A Sense of Dissatisfaction

Nevertheless, the sense of excitement about the future which Italians felt last summer after the end of Silvio Berlusconi's five-year reign has evaporated. To this day, no one really knows exactly what the Prodi government stands for. 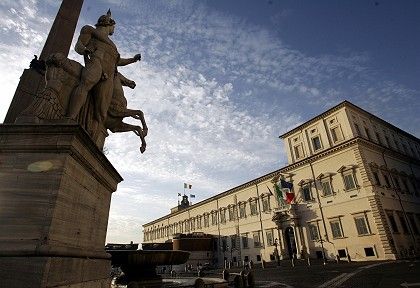 The Quirinale Presidential palace in Rome.

In its first stab at reform, Prodi's government attempted to boost competition in certain professions, such as lawyers, taxi drivers and pharmacists. But that was the extent of it. Judicial reform, a proposed law on conflicts of interest, reform of election law -- all of these reforms have been stifled, postponed or torn to pieces by the coalition parties' efforts to take center stage and melodramatic resistance from the opposition, both within and outside parliament.

Urgently needed investments in universities, transportation and healthcare were sacrificed in favor of cost-cutting measures. And the gentle increase in the retirement age, from 58 to 61, that the EU Commission, International Monetary Fund and Organization for Economic Cooperation and Development have been demanding for years appears to be impossible to carry out.

Prodi has essentially only one ally, and a reluctant one at that: Silvio Berlusconi. If the politician-cum-business tycoon were finally to retire and perhaps hand over the leadership of the opposition to former Foreign Minister Gianfranco Fini, Prodi's days would be numbered. He is, in a sense, at the mercy of his predecessor.

The Italians wanted to oust Berlusconi, and because there was no alternative they voted for Prodi. Today they would like to see the center-left government voted out of office, but not as long as Berlusconi heads the opposition.

In the last communal elections, Prodi's election coalition, The Union (L'Unione), suffered significant losses in the north, the country's center of power.

"These voters saw that the French voted twice in the space of three weeks, and that, within 48 hours, the winner had formed a government consisting of only 15 cabinet ministers, half of them women. They compare the situation in France with the Italian political landscape, which is divided over everything from a proposed civil union law to the best way to use surplus revenues." These are not the words of a member of the opposition, but of Piero Fassino, head of the Democrats of the Left.

Ironically, the reform-oriented Prodi government has increased the number of cabinet posts to 26 ministers and 87 junior ministers -- because each of the 14 coalition parties and minor groups wanted a piece of the pie.

A new book about the shameless practice of self-enrichment that transcends party affiliations in politics comes at an inopportune time for Italy's political elite. The book, called "The Caste," was written by Gian Antonio Stella, a columnist with leading Italian newspaper Corriere della Sera, and fellow journalist Sergio Rizzo. Since it was published, everyone has been talking about the "costs of politics," from President Giorgio Napolitano to the seamier daily talk show hosts. 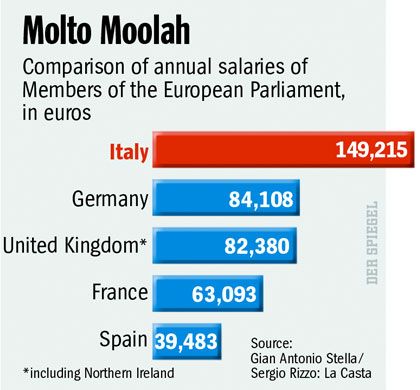 Italy has by far the best-paid Members of the European Parliament.

Italy has the largest number of members of parliament among industrialized countries, and by far the best-paid Members of the European Parliament. The leftist president of the Campania region spends 12 times as much money representing his region as German President Horst Köhler does for his whole country.

In the upper house of Italy's parliament, there are eight barbers for the senators, who also enjoy perks such as tennis lessons, vacation houses and limousines. Under Berlusconi, even aircraft were available to senators -- if the expense accounts are to be believed, they were apparently in the air for 37 hours a day. Since this scandal came to light, a trace of 1992 has been in the air once again. At the time, "Mani pulite," a campaign to uncover corruption, swept away large sections of the political caste -- at least temporarily.

"The Caste" was even the subject of the annual general meeting of the Italian manufacturers' association, Confindustria. The group's president, Luca Cordero di Montezemolo, received a standing ovation after criticizing the "costs of politics" and the self-involved nature of politicians. He described his vision of a different Italy, one with a slimmed-down government and a thoroughly liberalized labor market and tax system.

For some observers this was not so much a plea for change as a campaign manifesto. According to a poll taken after the speech, almost a third of all Italians said they would like to see Montezemolo, who is also the head of automakers Ferrari and Fiat, elected prime minister. Romano Prodi sat in the front row and attempted to maintain his composure.

Italians are beginning to yearn once again for a populist or, better yet, a nonpartisan man (or woman) of action. Unlike the 1990s, this time the pressure on politicians is not coming from the left but from the center. 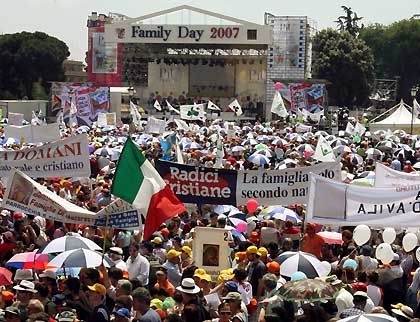 Partiticipants at the Family Day 2007 rally in Rome demonstrate for Christian values.

At an event on May 12 dubbed "Family Day," more than half a million Italians demonstrated for Christian values and family-friendly government policies. Their spokesman, former union leader Savino Pezzotta, promised that his alliance could very well play a useful role in politics in the future -- a statement politicians on both sides clearly understood as a threat.

The key question revolves around who can fill the great void in Italian politics -- in other words, who can attract the constituency of the Democrazia Cristiana, the now defunct Christian democratic party which once dominated Italian politics. So far no one has successfully managed the tightrope act of creating an economically liberal party that also promotes social values acceptable to the Vatican. The fragments of the center can be found in all camps, from the neo-Christian Democrats to Minister of Culture Francesco Rutelli's Margherita Party. Prodi, who is on friendly terms with former German Chancellor Helmut Kohl and began his career in the cabinet of former longtime Prime Minister Giulio Andreotti, is a dyed-in-the-wool Christian Democrat.

Prodi, for his part, hopes to succeed in committing a portion of the center to his pet project of establishing a party modeled after the Democratic Party in the United States. According to his vision, the two most important parties in his coalition -- the Democrats of the Left and the Margherita -- would miraculously join forces in this new party.

Preparations for the planned inaugural convention this fall have already led to emotionally charged scenes. The two parties Prodi hopes to unite are in fact like fire and water. The Democrats of the Left, led by Piero Fassino, have their roots in Italy's proud and venerable Communist Party, while Margherita sees itself as the political heir of the equally venerable Christian Democratic movement.

But even such impossibilities appear incapable of disturbing "il Professore" Prodi's composure. There are similarities between his government and Italy's state-run airline, Alitalia. In 2006, the carrier was losing €2 million a day and was being forced to a standstill every few weeks by tiny trade unions. Based on rational criteria, the airline should no longer exist. But Alitalia stays in the air, and most of its flights even arrive on time.

Besides, it is by no means the case that everyone in Italy is upset about the country's political troubles. The northern Italian economy is booming, Fiat has been back in the black again for some time and, as a result of a skillful merger with UniCredit, the world's sixth-largest bank was just created in Milan, with Germany's HypoVereinsbank as a junior partner.

The North's savvy businesspeople will continue to dream up new market strategies, no matter what politicians in Rome decide to do. And the South will likely continue to ignore the justice system. In both cases Rome, with its own problems, is far away. And whether a politician succeeds or fails is accepted with equanimity. One simply looks the other way.